In the tracks of champions - Grindelwald Uncovered

The fearsome Lauberhorn World Cup downhill course in the Jungfrau region is the longest and toughest in the championship. So just why recreational skier Roger Fulton decided to take it on we’ll never know…

Standing in the start gate at the top of the Lauberhorn, my heart is already pounding. I’m about to discover what it’s like to ski the longest and most punishing of World Cup downhill ski runs.

Of course, I’m no ski racer, and I won’t be hurling myself down a sheet of blue-lined ice like the world’s top downhillers did just a week ago in the World Cup. But as I push down the drop from the gate I am sensing the thrill at taking on one of skiing’s great on-piste challenges.

In the seven days since local boy Patrick Kung won the 2014 event a week after his 30th birthday, there have been a few big dumps and the Lauberhorn’s ice is now covered in a blanket of soft snow, which is already getting churned up by the hundreds of skiers who’ve set off before me. 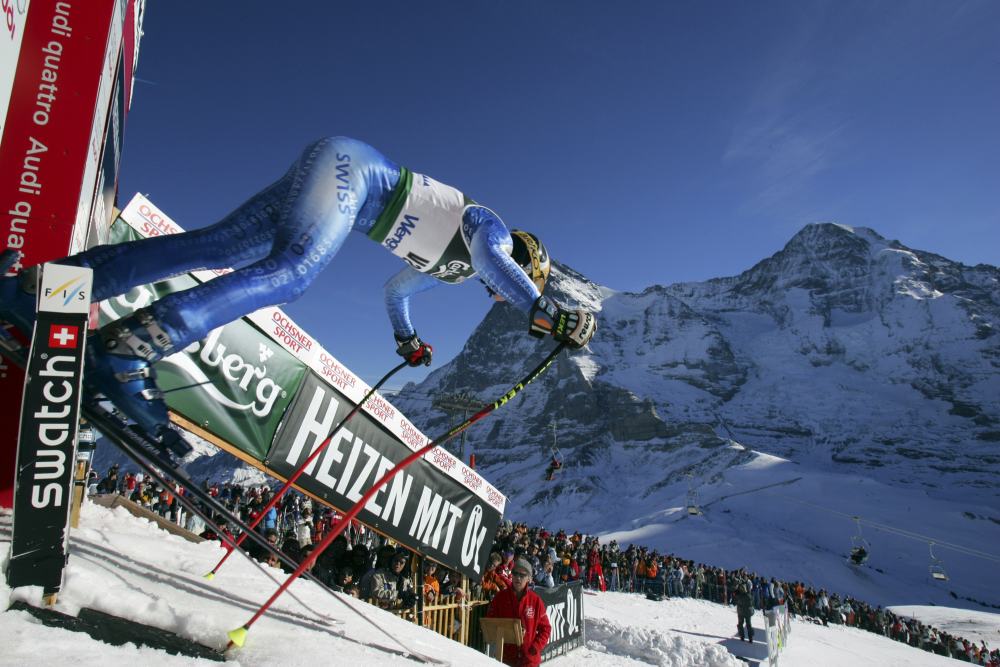 I ski fast (for me) down to the first big right-hander, making several turns where the racers would have made none. I’m already feeling it as I go into the thigh-burning carve before pulling up alongside my guide who is armed with some sobering stats.

“As they hit that first turn they are already travelling at 100kph, on their way to a top speed of just over 160kph,” says Bruno. That’s 100mph in old money. It’s hard for me to conceive that anyone can travel at 100mph on a pair of skis, let alone on one of the most demanding courses in the world.

We continue this way; skiing and regrouping as Bruno fills in more highlights of the history of this famous descent. Next up is the Hundschopf (Dog’s Head) jump over a rock nose about a third of the way down the course. That jump is closed off to the public, so instead we slither down a very icy 41-degree incline, before braking into a sharp left-hand turn.

After Canadian Corner, named after two Canuck skiers who both fell there in 1976, is the Alpweg trail – a fast, narrow section that’s only 10ft wide in places, and where you just have to hold your nerve and trust your guide.

Soon we come to the Kernen-S, renamed for 2003 winner Bruno Kernen after his 2006 crash on the consecutive right-left 90-degree turns separated by a small bridge. Again we marvel at how fast the racers take such steep turns as these. 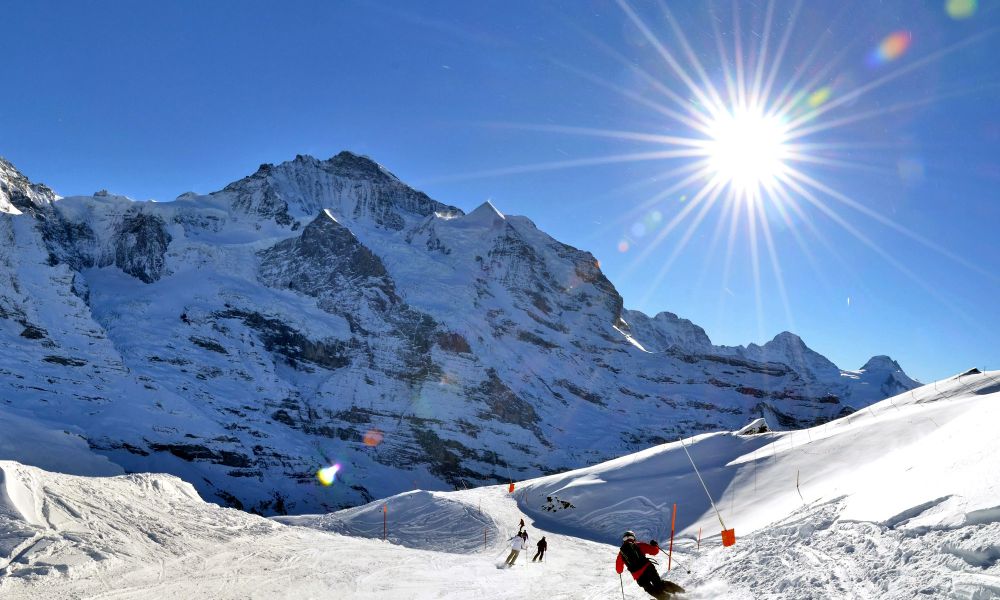 Finally we come to the Haneggschuss, a steep pitch after a flatter section, where the racers hit their top speeds – as do we – swiftly followed by the famous Silberhorn jump, (where the Silberhorn peak is framed in the background for TV viewers), and the Austrian Hole where nearly every Austrian skier in the 1954 race came to grief.

A guided descent of the Lauberhorn is one of the undoubted highlights of a visit to the Jungfrau region of Switzerland’s Bernese Alps. Okay, so you might not make it to the bottom in two and a half minutes like the pros, but you get your head crammed with wonderful facts and stories about this famous black run from the peak that sits at 2,472m between Grindelwald and Wengen.

Hearing those stories, you gain a tremendous respect for the 2.78-mile course – a full three-quarters of a mile longer than any other on the circuit – and for the skiers who race flat out down the 1,000m of vertical.

The Jungfrau region has long been popular with Brits – we practically invented ski holidays in two of the prime resorts here – Murren and Wengen, both delightful traffic-free villages either side of the Lauterbrunnen valley. Making up the third resort on the Jungfrau ski-pass is Grindelwald, another chocolate-box village nestling beneath the Toblerone peak of the mighty Eiger, which, along with the Jungfrau and the Monch, make up the magnificent big mountain backdrop to this stunningly beautiful Alpine region.

There’s a moment skiing here which, for me, sums up the scenic drama. We’ve been  helicoptered to the Mannlichen station, one of two drop-off points above the main Grindelwald valley. That ride – heli-skiing lite – is stunning enough in itself, but having set off from Mannlichen to ski over towards Kleine Scheidigg, there is a point where we turn a corner to come out of the lee of the Tschuggen peak and straight ahead of us soars the North Face of the Eiger. But it’s not just at eye level, the way so much mountain scenery is absorbed. You have to literally lift your gaze up… and up… and even more up to drink it all in. From any angle the Eiger takes your breath away. Coming upon it in this way, it’s just immense. 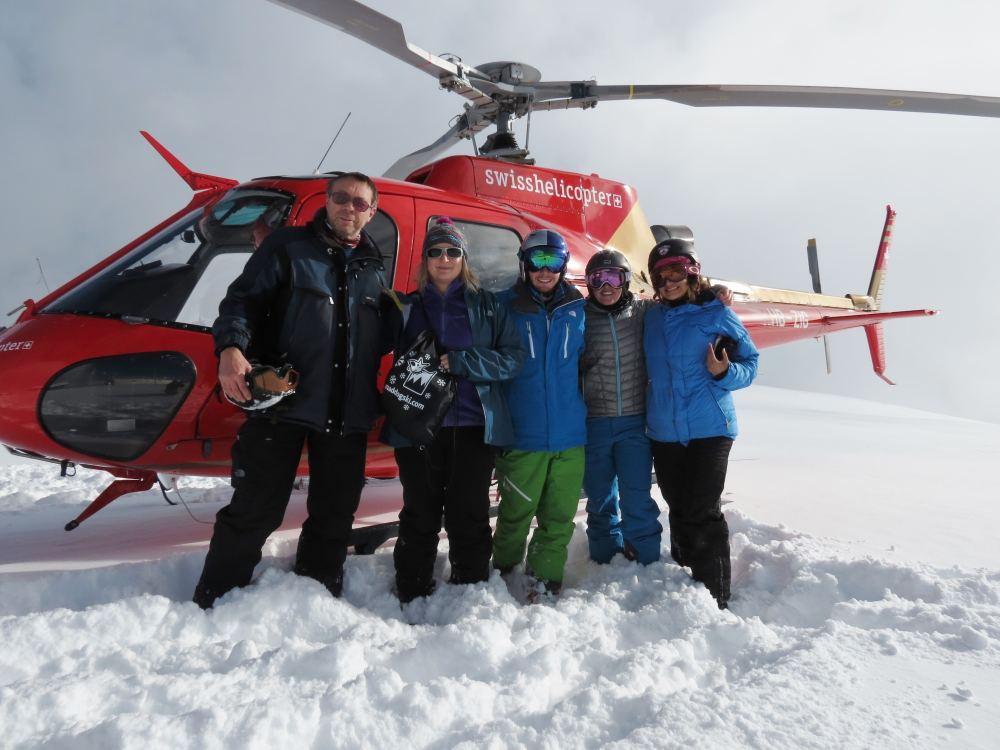 Skiing in Grindelwald is a joy – especially when the weather is sunny and the snow is fresh. The pistes are generally kind – perfect intermediate terrain – and the views always spectacular. Getting around takes a bit of advance planning however.

One of the main ways up the mountain is via the famous 100-year-old Jungfraubahn cog railway, which potters up the slopes from the main station in town. It’s meticulously on time, but slow. Reliable, but oh, how you yearn for a fast gondola… Actually, plans are in the pipeline for a £132 million Eiger Express gondola up to Eigergletscher, above Kleine Scheidigg, which will halve journey times up the mountain. Slated for 2016, it will undoubtedly become easier for all skiers.

The ski acreage is not huge – we spend a comfortable, unhurried day skiing the Grindelwald slopes. They basically fan up and out from the two main access points Kleine Scheidigg and Mannlichen. You need to stay high – both to keep in the best snow and to avoid the long runs back down to Grindelwald Grund, from where you have to start the whole slow climb up the mountain again.

Head for the trees

That said, after lunch, with flat light and rising winds at the top of the Honegg and Gummi lifts, we decide to drop down and head for the trees. The real gem in these conditions is the red run down from the top of the long – make that very long – Tschuggen T-bar. Maybe people have fallen out of love with T-bars, as we pretty much have this descent to ourselves. And when you do pick a home run, my vote goes to the red run 21, which we pick up from the bottom of the Tschuggen lift – it’s quieter than either the no 3 red from Mannlichen or the no 22 blue from Kleine Scheidigg. Don’t you just love those memorable piste names!

Grindelwald’s best-kept secret is probably the First area which is also the sunniest corner of the entire Jungfrau region. It’s about half the size of the main Grindelwald ski area – just 60km of slopes to 110, and being quieter it is a favourite spot with families. It’s also the home of Grindelwald’s White Elements snowpark and has a cracking tree-lined black run down to Bort. The morning we ski it, there is again deep powder, and blissfully few people to share it with.
First also has glorious views across the Grindelwald valley towards the Eiger. It doesn’t pay to rush here. The sunny terrace at the Berghaus Bort restaurant is a great place for a lazy beer or gluhwein. 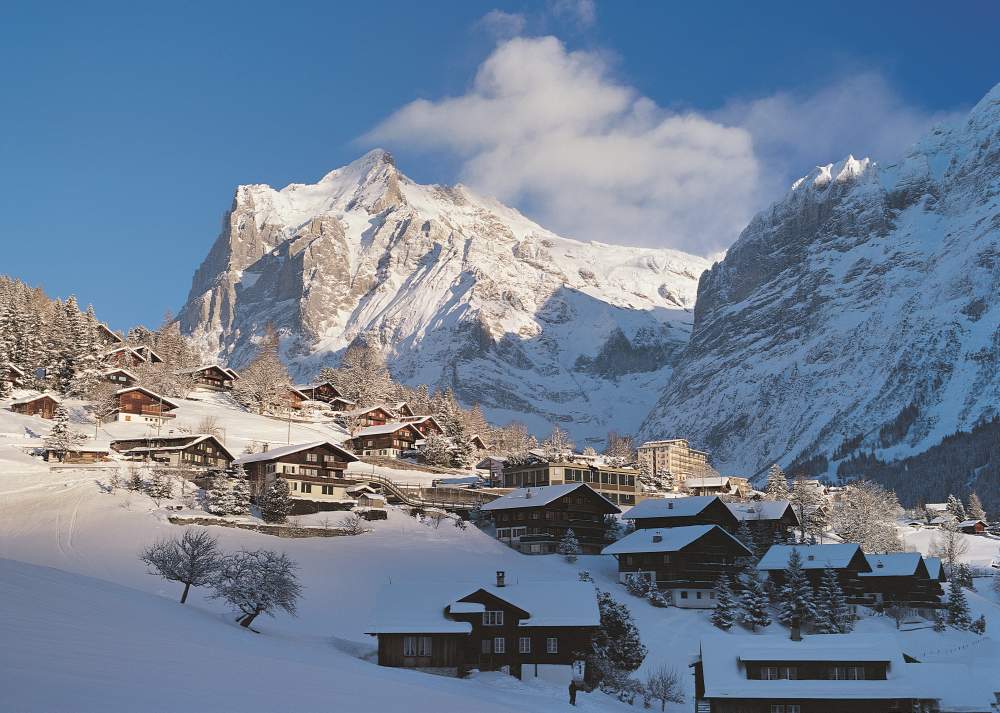 Access is the drawback. The gondola ride up from the village to First is slow – a full 25 minutes. Perhaps this is why we had it to ourselves. Either way, it’s not a ride you want to do more than once in a week, so save the No 22 home run for when you fancy stopping off at the lively Bus-stop and Rancher bars.

If you’re here for more than a long weekend, it’s well worth making the long trek to other edge of the ski area – to Murren. This village is the epitome of Alpine charm, and feels as if it’s the same today as it was when the Brits first started skiing here in 1912. If you want a challenge, the freeride terrain above Murren is fantastic, as is the drop from the revolving restaurant at the top of the Schilthorn – famous location for the Bond movie On Her Majesty’s Secret Service.
And on one sunny day it’s also worth tearing yourself away from your skis to take the train ride up to the highest railway station in Europe, the Jungfraujoch, at 3,454m. The section up from Kleine Scheidigg to the top actually goes through the Eiger and the Monch – and you get to stop twice to look out from inside the Eiger’s north face.

The top is a bit of a theme park – with multi-media presentations, an ice palace, private ice bar and restaurants, but if you walk out onto the snow and away from the circus, the views down the huge Aletsch glacier are breathtaking (literally, due to the altitude!) and the Sphinx weather station glistening against a clear blue sky has to be one of the wonders of Alpine architecture.