Skiing through history on the Great War Ski Tour

A century ago, the beautiful peaks of the Dolomites were the front line for pitched World War I battles. Roger Fulton combines spectacular skiing with cultural curiosity by visiting them on Italy’s new on-piste Great War Ski Tour

Normally, you just admire the beauty of mountain scenery. But this is different.

As I ski up beside him, my guide Marco gestures with his ski pole at an innocent looking hump in the spectacular landscape of giant limestone cliffs. ‘That peak there was the scene of some of the fiercest fighting of the whole war,’ he says. It’s not your average guide spiel. But this is not your average ski tour.

I’m in the Dolomites, now a peaceful UNESCO World Heritage site, famous for its spectacular high peaks and glorious skiing, but once the battlefield for one of the deadliest and most futile conflicts in World War One. Here, in one of Italy’s biggest winter playgrounds, the Italian and Austrian armies fought each other to a standstill with thousands killed on both sides for advances measured in metres.

Right now, in early February, the past lies buried beneath a couple of metres of snow, yet it doesn’t take much to grasp the extreme nature of the conditions the two armies fought in. 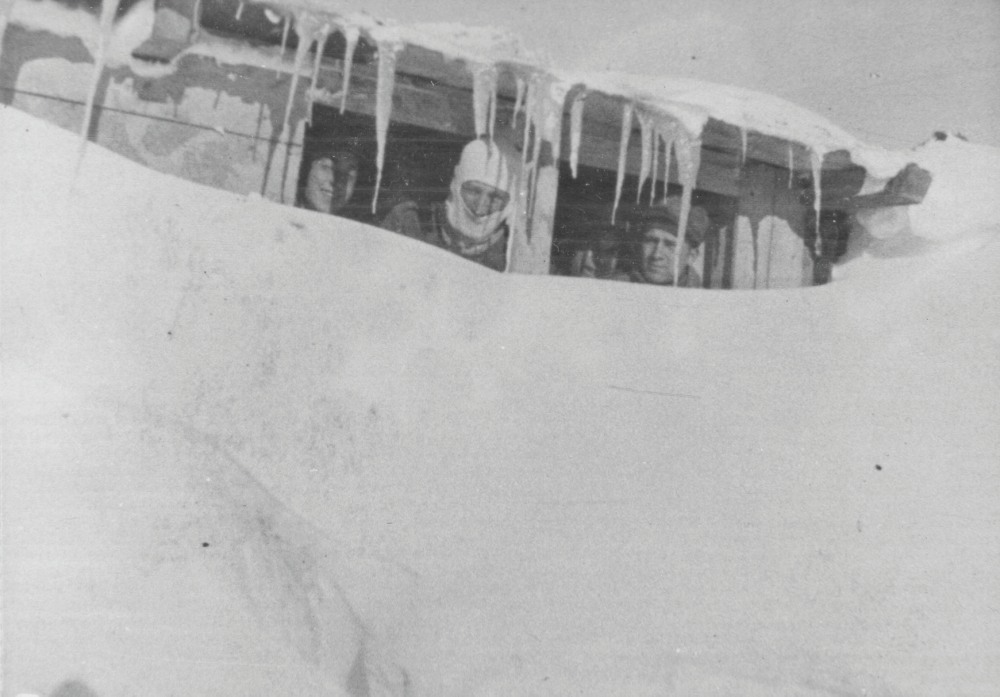 The frozen trenches of the ‘Great War’

One hundred years on from the start of the terrible conflict, the region is marking the anniversary by adding winter Great War ski tours to their historical summer hiking and via ferrata tours.

Our tour begins in a car park by the Passo Falzarego, at Lagazuoi, a 20-minute drive up hairpin bends from the impeccably fashionable ski resort of Cortina d’Ampezzo. Walking to the cable station we see our first sober evidence – a giant artillery gun, pointing back over the valley.

We ride the cable car up to the towering ridge above the beautiful Hidden Valley of Armentarola – our first run of what is to be a long day on the skis. But before we do, Marco, gives us a glimpse of the ‘battlefield’ – the doorway to a warren of competing tunnels burrowed into the heart of the mountain. Between 1915 and 1918 these ‘trenches’ housed whole armies locked in a pointless tit-for-tat subterranean war of mine and counter-mine;  now the entrances are filled with snow, a reminder that this was a war where as many soldiers died from the cold or avalanches as from combat. 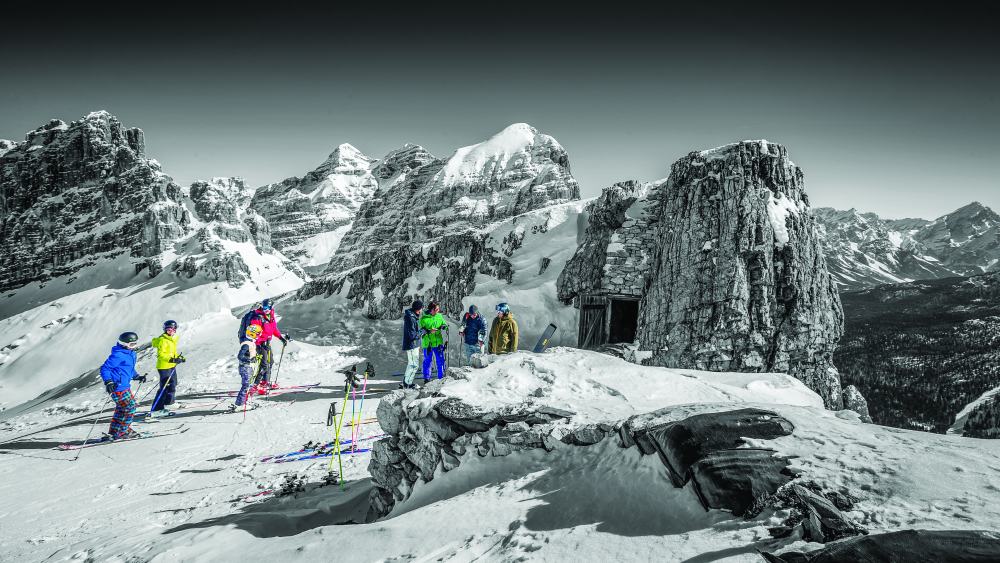 Roger and his group stop at the Lagazuoi tunnel entrance. Photo: Bandion.it

After a heavy snowfall the officers would order their artillery to fire above the positions and trigger deadly avalanches to engulf the enemy. On one day, ‘White Friday’ 13 December 1916, 10,000 soldiers were killed by avalanches.

Both sides clung to these precipitous positions for years, enduring temperatures as low as -30°C. They didn’t have fleece-lined, Gore-Tex ski gear and technical thermal layers. They made do with rough wool jackets and wound cloth round their hands to ward off frostbite.

After such an introduction, it seems somewhat incongruous to think about skiing. But the 6.5km Hidden Valley red run is a highlight of any ski holiday in this part of the Dolomites, and demands your full attention. You start steeply but soon the piste opens out into a magnificent panorama across the valley, with the highlight a huge stunning frozen waterfall halfway down.

The other great attraction of this run is that if you don’t fancy a long hike out from the bottom, the only way is to grab a tow behind a two-horse drawn sleigh.

There must be nearly 40 of us clinging to the rough knotted tow ropes, but the horses set off at a decent clip and we glide effortlessly for 1,500metres, the only anxiety coming from the close proximity of so many other skiers. Catch an edge on a button lift and you only make an ass out of yourself. One slip here and the embarrassment would be multiplied 40-fold as you take out the entire group.  After leaving the horses to recover, a short schuss brings us to a button lift that links us into the beautiful Alta Badia ski area.

We ski an easy blue down to the San Cassiano lift station and catch the Piz Sorega cable up to the Alta Badia plateau where this delightful ski area opens out into a network of mostly blue runs.
It’s a fabulous place to spend a relaxing day or two cruising but Marco’s on a mission – the Great War ski tour is not for slouches. At nearly 100km (albeit less than half on skis) it’s a full-on eight-hour day on the move.

As we make our way across Alta Badia we get our first glimpse of the epicentre of this circuit – the innocuous-looking Col di Lana, which sadly symbolises the futility of the conflict. The Col di Lana is not even a proper mountain, more a gentle hill. Yet it turned out to be an almost insurmountable obstacle. During 1915 the Italian army – mostly terrified young conscripts – threw wave after wave of assault against a few hundred Austrian defenders dug in at the top. By year end, after 90 separate attacks, there was a stalemate. By mid-April the next year, the Italians had burrowed under it and detonated five tons of explosives. Half the Austrians were killed, leaving 140 to be taken prisoner. Cost to the Italians: 6,000 men.

As I make mental notes to enjoy the slopes and food and wine of Alta Badia on another less frenetic day, Marco leads us on towards Arabba, briefly following part of the Sella Ronda, that other famous Dolomiti ski circuit. We romp down a series of blue and red runs, the snow still crisp and forgiving in the winter sunshine.

The slopes in this section of the route are ideal for pushing the pace – the reds genuinely red and the blues fast and generous. For a while history is forgotten as we simply enjoy the skiing and revel in the spectacular Dolomites scenery. Given more time, a detour to the Marmolada glacier would have shown us where the front line stretched into tunnels dug into the ice.

Instead, after a pit-stop of hot chocolate and rum at Malga Ciapela, we enter a totally different world – a high-walled canyon, lined on both sides with frozen waterfalls. 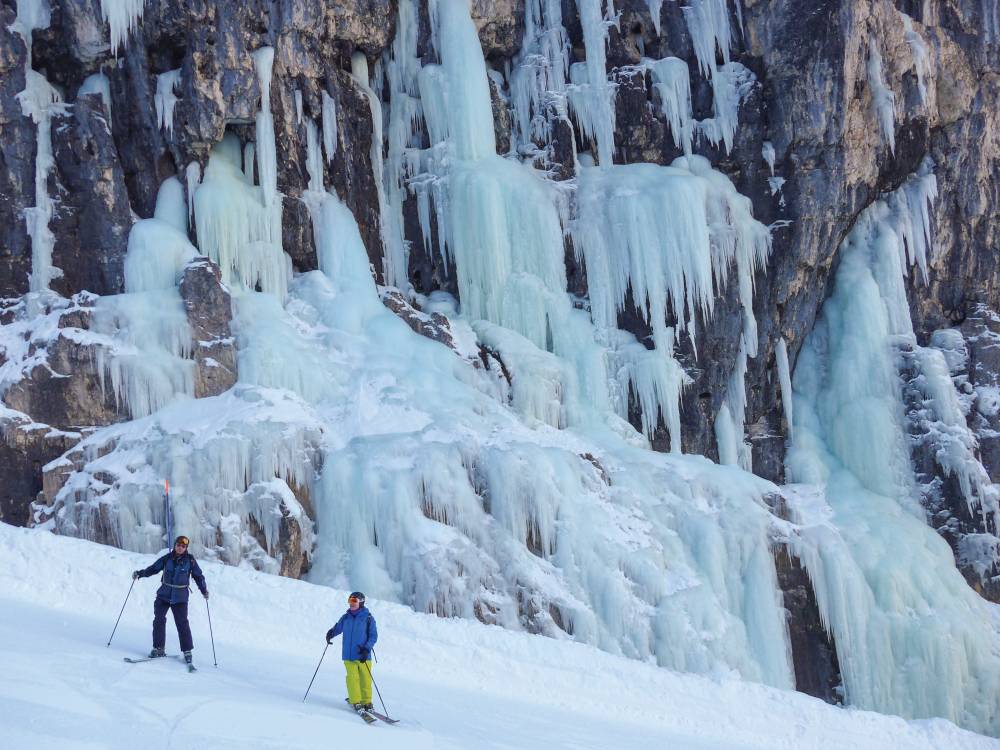 Emerging in the small town of Sottoguda, we shed our skis and kick back in a bar until the ski bus arrives to whisk us to our next on-piste stretch at Alleghe. This is the Civeta area, a less fashionable and quieter corner of the Dolomites. After a short red and a short blue to get tiring muscles working again, and one magnificent red, the Pista Salere, we get back on the bus at Pescul.

The ski buses join the dots on the Great War tour, which can be skied in either direction. Unlike the Sella Ronda, however, you don’t ski the whole 100km circuit.

After more than 20 hairpin bends we’re poured off at Fedare. From here, it’s just a handful of lifts and runs to where we started. But it’s nearly 4pm and we’re done for the day. So while Marco heads back to the car park at Passo Falzarego, we glide off the Fedare chair to spend a night at the perfectly panoramic Rifugio Averau.

Over a beer we watch the sun set over the distant Sella Massif ahead of a fantastic evening meal, plenty of wine, and a good night’s sleep. But as the temperature plunges, it’s hard not to think of the soldiers who endured night after freezing night in these mountains.

Our plan for the next day is to ski back to meet Marco at the Passo Falzarego, passing by the famous Cinque Torri peaks, where there is an open-air Great War museum, where you can walk through the trenches.

However, the next day couldn’t be any different. The sun has gone, the clouds have cloaked our rifugio and it’s snowing heavily. Not quite snowed in, yet, we set off in the gloom, just about making out the jagged fingers of the Cinque Torri as we ski down through the clouds.

Back where we started, for us the War Tour is over.