But will Serre suit everyone? Picking a ski resort for a group of friends with differing abilities is a tricky business. Plump for one that’s beginner-friendly and you risk boring the more advanced; pick somewhere that’ll keep the adventurous entertained and you risk alienating, even terrifying, the novices. Rebecca Miles drew on her experience as a seasonnaire to find what she was looking for in Serre Chevalier 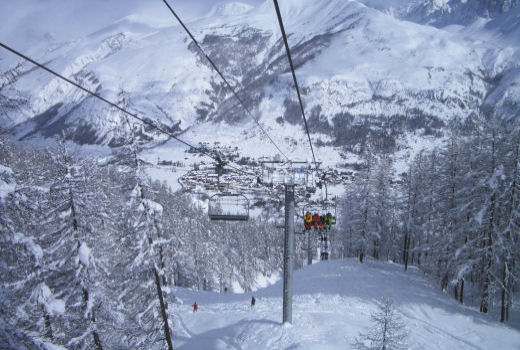 Your mileage may differ, but in my world trying to agree on where to go skiing with my friends can cause endless arguments. So each year we give one of us the responsibility of making the choice – and taking the blame! This time it was my turn.

I had high hopes for Serre Chevalier, a large but friendly resort in the southern French Alps. It’s a resort I’d previously spent a couple of seasons working in, and while not the most fashionable of French hangouts, it slots neatly into that much talked of but rarely lived up to something-for-everyone box. Blessed with 250km of north-facing pistes spread along the the Guisane valley running from the Col du Lautaret to the UNESCO World Heritage site town of Briançon at the entrance to the Ecrins National Park, its slopes hug the contours above and below the high treeline (which means it’s one of the best resorts to be in when the weather closes in). Gentle at times through broad bowls, steep and narrow at others, I was confident Serre Chevalier would suit my group of friends that included a near-beginner skier, two competent skiers and two confident snowboarders.

First, there was the small matter of where to stay – get that right and you are halfway to winning the approval of your party. I’d chosen to go with Eureka Ski, a small, specialist Serre-based operator, run by Mel and Gavin Crosby, who know the resort inside out. We checked into a smart new apartment, 150 metres from the lifts in the highest and most traditionally French of Serre Chevalier’s four main villages, Monetier les Bains. By staying in one of several tasteful chalet-style buildings on the outskirts of the village, we had access to the complex’s outdoor heated pool, steam room and sauna (complete with a window into the blue of the swimming pool’s water). Both our balcony and the sunloungers around the pool gave sumptuous views down the valley to the peaks over the Italian border and the Col de Montgenèvre. One of the joys of visiting later in the season meant after a day on the slopes it was (just about) warm enough to enjoy the après sun around the pool.

One of the main reasons for wanting to come to Serre Chevalier was that it’s the most recent resort to benefit from a branch of the highly-acclaimed New Generation ski school, run by Gavin Crosby. If there was one thing that was going to give our near-beginner Jon an enjoyable holiday it was lessons with a ski instructor with the Midas touch. When I was working in Serre Che many moons ago he had just set up his independent school Eureka Ski. That New Generation has grabbed the opportunity to work with him was telling – with a carefully chosen turn of phrase and a tweak of the stance, he can transform nervous nellies into slope-wise sheilas and inquisitive freeriders into confident explorers.

Gavin put Jon through his paces on the long green and blue runs above Villeneuve, a picturesque natural bowl for early intermediates at mid-mountain, and accessed by gondola. Its altitude gave better snow conditions than the nursery slopes down in the valley, and the runs were long, very wide, and great for building up confidence. From there, the next village along the valley, Chantemerle, can be reached by a mixture of exposed pistes and runs through the trees. From mid-mountain at Chantemerle is the long black Luc Alphand run to the valley floor, which was fantastic for the more advanced of us to tear down and try and emulate the style of its namesake – the 90s downhill legend.

Our days were spent merrily hooning around the mountain and playing in the snowpark. Since I was last here there had been some much-needed improvements and upgrades to the lifts and runs, most notably replacing the rickety two-man Balme chairlift with a fast six-man, making the thoroughly enjoyable rollercoaster Cucumelle run much more accessible in the process.

After branching out in the morning we’d all meet up, either for a picnic lunch in a sunny spot or for the delicious dish of the day on the secluded sun terrace at Peyra Juana. A wonderfully simple and charming restaurant, it sits in the network of wooded red and blue runs above Monetier that are always deserted. 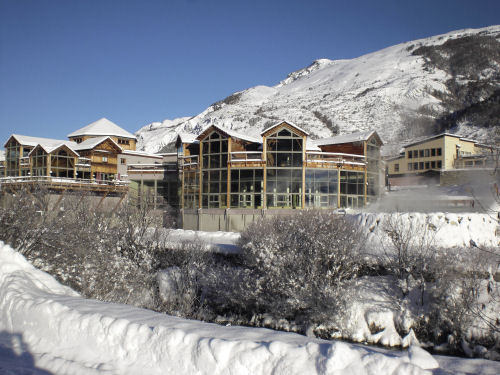 If there was ever any doubt that the slopes may not suit everyone, I was confident the local food and drink would put a smile on our faces. Eating out options were varied and wallet-friendly, and we particularly enjoyed a simple but tasty meal at Le Kawa. While Serre Chevalier isn’t known for its wild nightlife, the relaxed après with the locals found in Monetier’s Alpen bar was a million miles away from the Fulham-on-snow scene found elsewhere.

And if you fancy something a little different with your skiing, check out Cols Porteurs, a 90-minute behind-the-scenes tour of the ski area, available to anyone who can ski a red run and has a Serre Chevalier ski pass. If you fancy finding out how the chairlifts work, learning a little about the history of the area and seeing how artificial snow is made, this is for you!

So did Serre Chevalier manage to please everyone? Yes, it did. It’ll be a hard act to follow next year!

Serre Chevalier is in the Hautes-Alpes region of France, on the edge of the Ecrins National Park.

By rail nearest rail station is Briançon (8.5 miles from Monetier).

Snow travelled to Serre Chevalier with Eureka Ski (www.eurekaski.com; +33 492 245 647) and stayed at La Cabane apartment in Monetier les Bains, from €620 per week, based on six sharing.

Snowpark Five freestyle areas, the main park is the Snowpark above Aravet

MUST DO’S Head to the ‘secret chair’ – the Aiguillette, tucked away in the trees above Chantemerle and serving a couple of terrific reds; take a dip in the naturally warm spring water of the spa baths in Monetier les Bains.

TOP TIP Free shuttle buses serve the individual villages and the whole valley – make sure you catch the right one or you could end up further from home than expected!