Is it really possible to have a relaxing ski touring holiday? Pete Coombs discovers that in the Picos de Europa you can combine hard climbs and exhilarating descents, as well as lazy breakfasts, cultural encounters and even the odd coffee stop…

Outside, Mike points towards a mountain with a narrow snow filled couloir. “That’s where we’ll come down.” It seems bizarre to be standing in the morning sun, surrounded by green fields in a small farming community, splitboard under my arm, wearing a ski jacket and looking across snowless woodland to my target for the day. But that is what ski/splitboard touring in the Picos de Europa is like.

There are no ski resorts here, so there’s hardly any winter infrastructure, other than a few unmanned refuges and one sole cable car within the Picos de Europa National Park reserve proper, which was built mainly for use by the many hikers and coachloads of sightseers who flock here in the warm summer months.

An hour earlier, I was making my way through the creaking corridors of the 500 year old house towards a 9 o’clock breakfast of freshly baked bread, homemade jams and the honey from the neighbour’s hive.

There’s never a rush when ski touring with Mike Stuart, who has lived just outside the town of Potes in Northern Spain for most of his adult life. 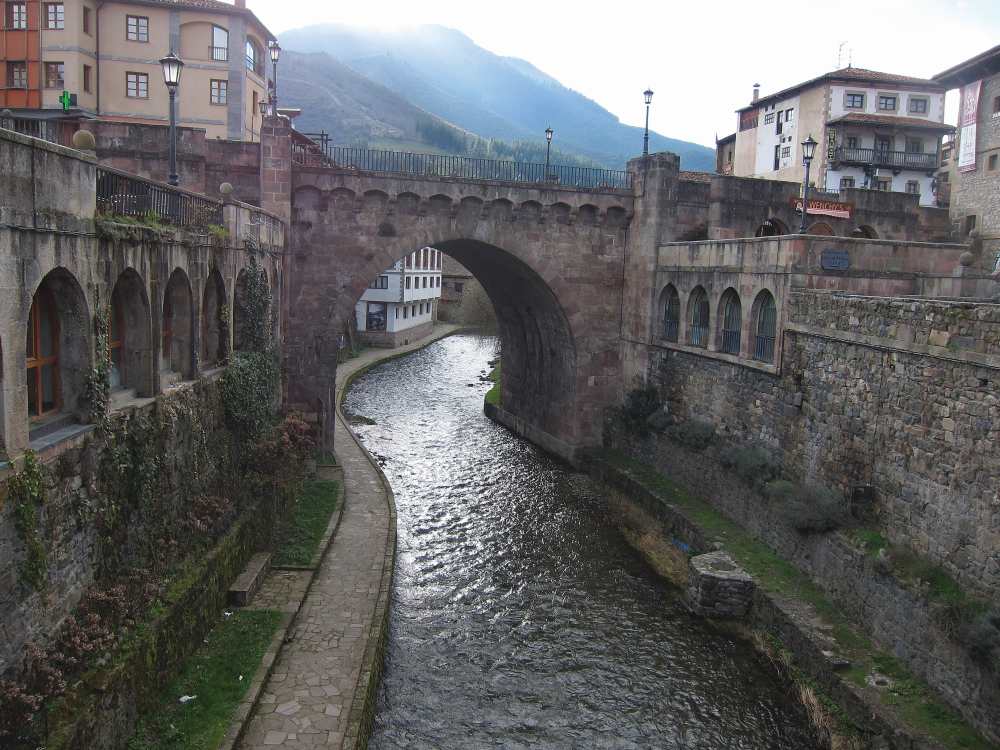 Greeted at the breakfast table by his wife and a fresh pot of coffee, I sit down alongside their two kids who are getting ready for school, and three skier friends, who have already been here a few days.

Mike enters, about as rushed as I have ever see him, knocking a few of his wife’s wildflower photos on the wall with his enormous backpack, which spews a rope, and which bears the scars of many an adventure. With the photos now hanging at a bit of an angle, at least they’re in keeping with the rest of the house.

“We’re going to climb up to Cdo de San Carlos today, so we’ll meet at the minibus at 10.00. It’s a bit of a drive, and Peter my friend will come with us and drive the minibus back - then pick up the 4x4 and come get us from the other side.”

After a short chat with a local farmer keen to show off his new rotavator – while his wife is angrily trying to get a word with him, shyly clinging her dressing-gown around herself in the doorway of the house - we’re off.

We climb slowly on a series of empty roads, which wind through timeless farmland and tiny stone villages.

“The snow’s not at its best this season, but it should be good up high; the weather report is good so we should be in for a cracking day. Coffee?”

Ski touring with a guide in the Alps can be exhausting, as everyday you’re up before the sun, gulping down breakfast on the run, all to make sure you catch the first lift – and while it’s a real buzz to be riding up the mountain with all the other ski-tourers and mountaineers, smug in the knowledge that all those lazy piste skiers are more than likely still in bed, it can be hard going.

I have to admit that once at the top of the morning lift, I’ve always fancied popping into the mountain top café for a quick coffee. Whenever I’ve suggested it, I’ve always been laughed at as if I were making a joke. So when I look around at the rest of the group, I realise that I’ve misunderstood; when Mike said coffee, it wasn’t a question - it was a declaration.

We duck into a crammed village shop, with leather belts, knives, smoked pig legs, tins of soup and a whole host of other things hanging from the ceiling and rammed into every possible nook and cranny. The only places free of goods for sale are the few spare stools that aren’t being used by the local farmers.

After our coffee, which comes with cured pork and local cheese on crisp bread, and only €1 each lighter, we are again on the road, climbing steeply now towards the snowline.

“Wild cat!”  Mike shouts as we turn a corner. “They’re very rare; you don’t see them often at all. They sometimes interbreed with domestic cats, but you can tell that was a pure one from the rings on its tail fur.”

Around 11.30am, I’ve split my snowboard in half, turning it into a set of skis and put on its climbing skins. I’m walking at the back of our small group as we climb steadily through a rocky landscape along the bottom of a sheltered, snow-filled gully.

I soon find a rhythm, trying to slide my half-board skis along the snow, rather than waste energy by lifting the weight of my skis and boots up. It’s an easy and enjoyable few hours with the skis sitting completely flat on the snow, meaning I don’t have to worry about digging the edges of the skis in, or doing any kick turns, which is often the case when traversing steep slopes. 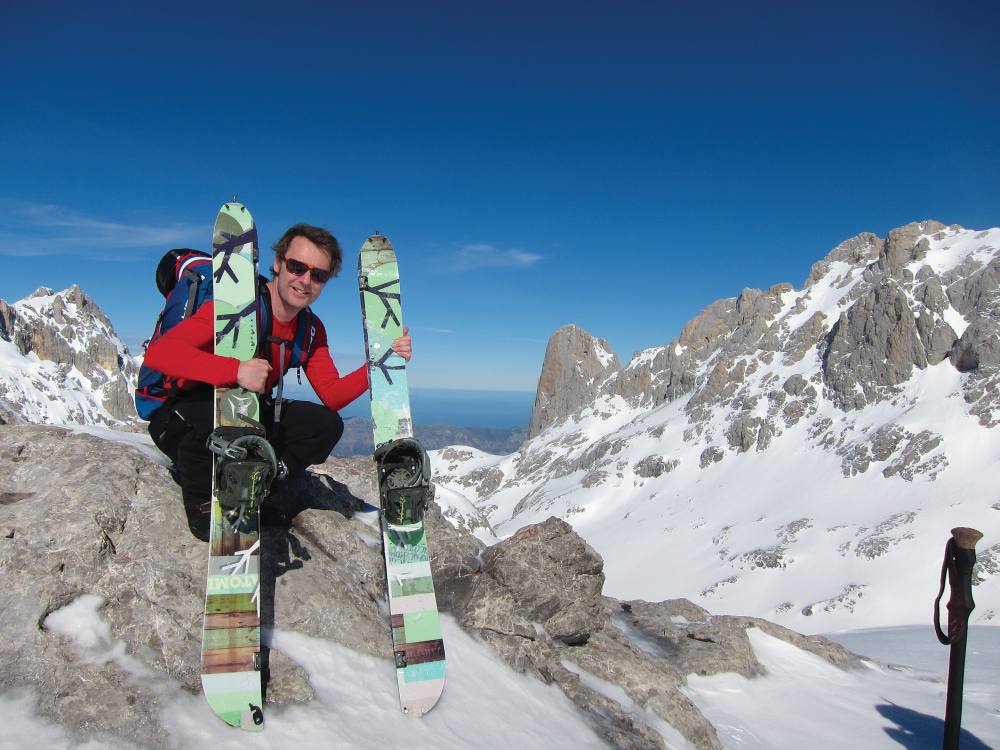 Just as a lime green refuge comes into sight, beneath a steep icy slope, a herd of forty plus chamoix crosses in front of us; not worried, but cautious of our presence. Shortly after that Mike points out some wolf tracks in the snow. “There’s quite a few wolves in these mountains, I often see prints but seldom the wolf itself. I wouldn’t be surprised if it’s tracking those chamoix.”

We stop in the refuge for a lunch of cheese, bread and a flask of tea, which Mike plucks from his backpack, seemingly making no difference to its size or shape. At 2:30pm, refuelled, I put on my crampons and using an ice-axe, my splitboard on my back, I climb the steep and icy slope behind the refuge towards a ridgeline.

It’s a little nerve racking, as one slip and it would be a long slide back down; there’s nothing to fall off per se, but if I do fall there are a lot of rocks to hit on the way.

Once at the ridge line, we then have to drop down a little into a large untracked bowl, before crossing it and climbing steeply on windblown snow. Once again I’m using my splitboard, rather than crampons, to climb - but now it is too steep to tackle straight on and I have to zigzag my way up.

Topping out I look out from a snow saddle between two rocky peaks, onto a breath-taking view of high snow-covered peaks, with lush green forest and farmland beyond.

“That’s my village over there,” offers Mike, “and that’s the road Peter will have used to come and get us; I can’t see where he’s parked but he should be there by now.” Looking down at a rough, snaking forest track, I can see why he’ll need a 4x4.

“And that’s where we’re going down.” I’ve been so side-tracked by the view that I haven’t even glanced down at the couloir I’m now stood above. It looks great: it’s wide, around 50 degrees in gradient, with lovely crescent-shaped banks and the odd rock to navigate around. 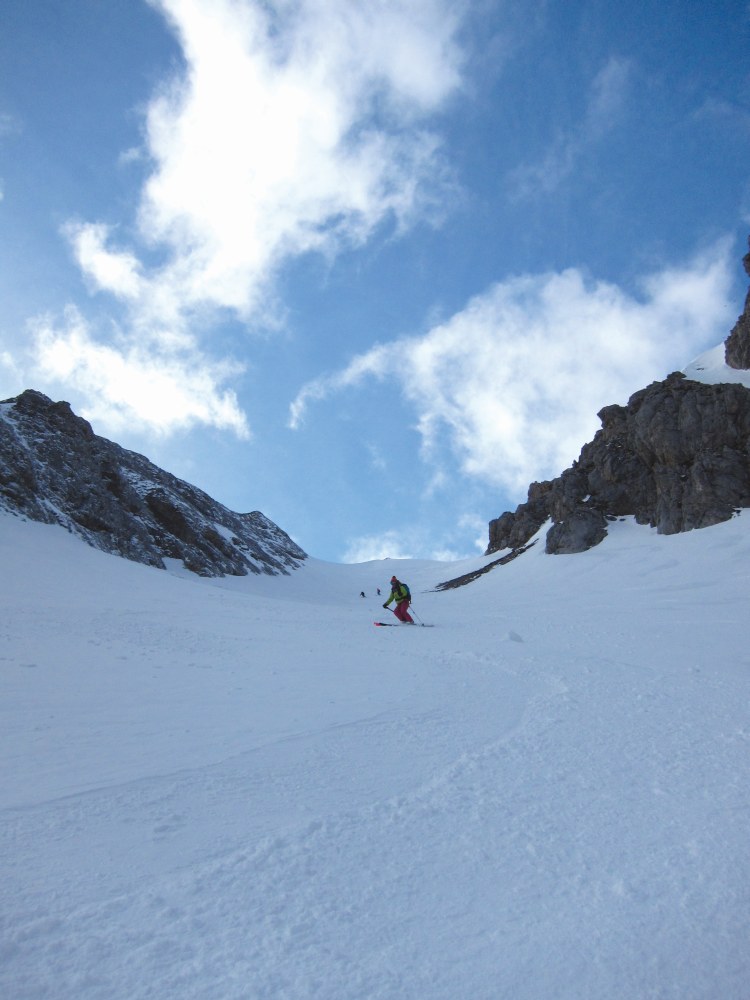 It’s 4:30pm by the time I’m ready to snowboard down, but being that little bit further south, the sun is still high in the sky and there is plenty of daylight left in the day. I tear it down the slope on perfectly flat, crisp, spring-like snow - stopping only to watch the others speed down with huge smiles on their faces.

Eventually the snow narrows, and after hopping over a small stream we meet a dirt road. We clipped out and walked a short way to where Peter was waiting in the Landover. 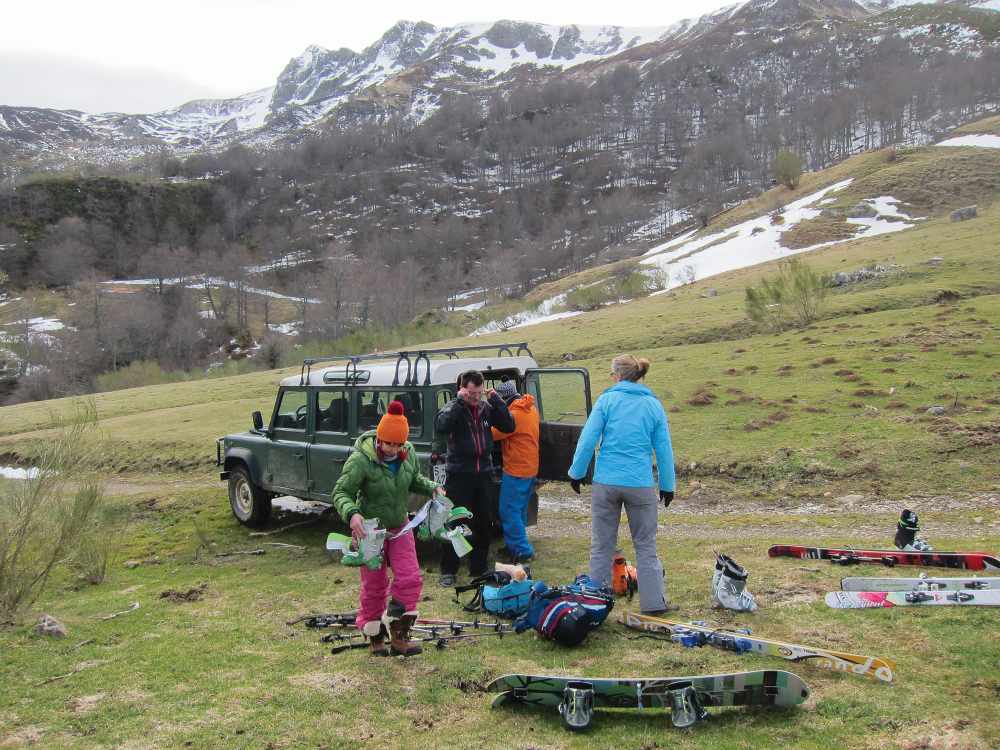 We spend a week ski-touring like this: exploring, skiing and relaxing. Instead of a dash up and down a mountain, this is a real adventure in wild, untamed mountains. On day one I see wild cat, chamoix and wolf tracks, drink coffee with local farmers and eat home-produced food. Okay, I don’t ski powder on day one, but I’ve enjoyed an exciting decent after a five-hour climb and used most of the kit in my backpack.

Santander is the nearest ferry port to the Picos de Europa. Brittany Ferries sail from Plymouth and Portsmouth to Santander.

P&O Ferries sail from Portsmouth to Bilbao, an hour's drive from Santander.

And LD Lines now have new routes running from 2014, Poole to either Santander or Gijón.