A pioneer for ski tourism, Mürren ski resort is a charming car-free village in one of the most spectacularly scenic areas of the Swiss Alps. From the Mürren piste map to the best ski hire and après ski, here's your guide to skiing in Mürren.

A pretty, car-free Swiss village linked by a historic mountain railway to Wengen, Grindelwald and other Jungfrau Region resorts, Mürren has a special place in the history of ski tourism.

Located amidst some of the world's most spectacular Alpine scenery, the village has managed to escape over-development, despite having an illustrious past when it comes to the history of winter sports. The first Alpine Ski World Championships were staged here in 1931 by the Ski Club of Great Britain. Three years before that the first Inferno race was also held here - this legendary event is believed to be the longest downhill race in the world, and still attracts around 1,500 skiers every January.

Located at one end of the legendary Jungfrau region, Mürren is on the same lift pass as Wengen and Grindelwald, although not linked to them by ski piste. Among its many claims to fame is the revolving restaurant, perched on top of the 2,970m Schilthorn mountain (also known as 'Piz Gloria') which offers incredible views all around. The panorama from here includes Mont Blanc on the French - Italian border, the German Black Forest, and the local peaks of the Eiger, Mönch and Jungfrau. Solar powered, it revolves once per hour and was made famous by the James Bond film, On Her Majesty's Secret Service. For Bond fans there's a themed exhibition and a 007 Walk of Fame.

Mürren is a car-free village, like Wengen. Drivers must park their cars in one of the large valley car parks below and take the cable cars up to the resort. The absence of petrol burning vehicles enhances the natural beauty of the place even further, bringing true tranquility, and mountain air as pure as it can be...

One of the resorts which can claim to be the birthplace of downhill skiing in the Alps, Mürren also offers the highest ski area in the Jungfrau Region boasting around 53km of local trails. The larger ski area Top Ski Pass offers access to some 205km of piste, including the slopes above neighbouring Wengen and Grindelwald. These are reached and returned from by a combination of ski, cable car, train and bus. 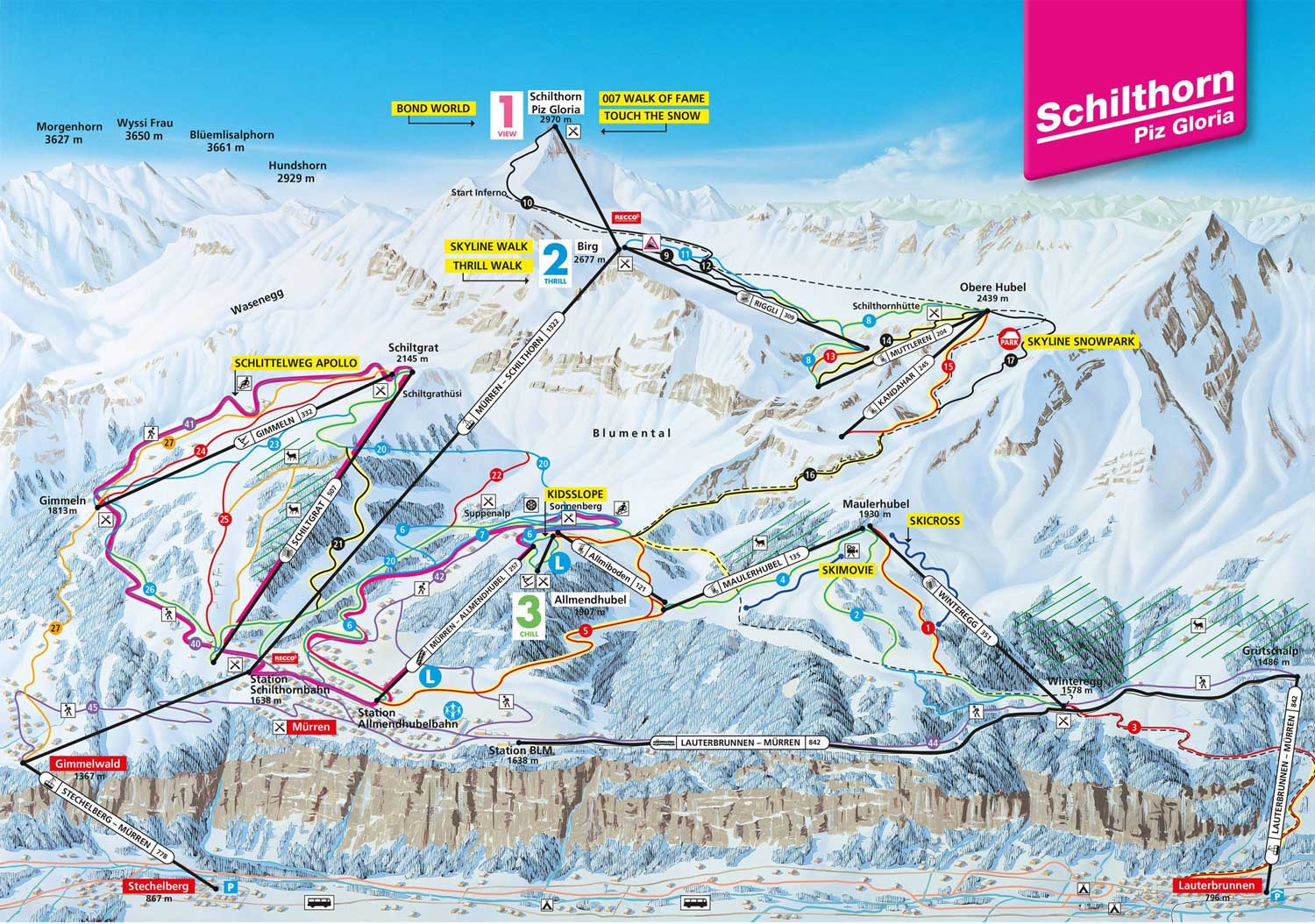 There are three main ski areas. The best known is the Schilthorn, which is tough at the top, but superb for intermediates from the cable-car mid-station at Birg. The Schiltgrat has a mixture of runs whilst finally the Allmendhubel, reached by funicular train from the village, has a draglift and easy runs for beginners. It's also possible to take a chair from here to Winteregg, where there are lovely runs down through the pinewoods. Mürren's most famous runs for advanced skiers are down from the Schilthorn, and not marked on the map. The main one takes you 6km back down to the village.

Anyone in the resort in January should not miss the 12km Inferno race, staged annually for more than 60 years and involving a 2,842m vertical descent from the top of the Schilthorn down to Lauterbrunnen in the valley. The course covers several steep sections, often full of bumps, and the fastest descent take around a quarter of an hour. For mere mortals, an hour is regarded as a comfortable time. The race was instigated by the famous Kandahar Club, established in January 1924 and still going strong in the resort.

The Kandahar named their club after a British lord who donated a silver chalice as a prize for competitors in club events. The Club was involved in the early pioneering of slalom technique and worked with the Arlberg school of St Anton in the late 1920s, instigating the Arlberg-Kandahar Race in that resort. The Inferno race was predated by a race organised by Sir Arnold Lunn, a pioneer of Alpine winter sports holidays, in 1922, which is believed to have been the first ever Alpine ski race.

With the new V-Cableway from Grindelwald to Eigergletscher opening December 2020, following on from the new Grindelwald-Mannlichen cable car in December 2019, you can directly access the ski area on that side of the valley, and the Jungfraujoch - Top of Europe attraction much more quickly.

The Skyline snowpark at the Schilthorn is an obvious attraction for freestylers, with an excellent combination of modules of varying sizes. Shaped by the Austrian experts Q-Parks, it's one of the finest parks in the Jungfrau region.

You can access some great off-piste from the Schiltgrat ridge, where steep descents drop down into the Blumental bowl. The potential for ski touring from the Schilthorn is huge, but you need a guide to make the most of it.

Given the surroundings here, there's a fair amount of quite testing off-piste terrain in this region, as well as some enjoyable inter-piste skiing. There are well-established off-piste itineraries (which you need to tackle with a guide) and plenty of opportunities to go heliskiing.

You can also explore more terrain on the Grindelwald side. Grindelwald-First is a snowboard and freeski paradise, and relatively crowd-free.

Mürren is a perfect ski resort for a relaxed family holiday. The wooden chalets and car-free heart are a delight, while the off-slope facilities are excellent. The sports centre has been greatly improved over the past few years, and the ice skating and curling will keep kids happy for an hour or so. The various tobogganing routes are great fun, too.

Most of the restaurants in Mürren are based in the hotels and offer traditional Swiss Alpine fayre - gorgeous as it is - to a high standard. The most noted restaurants are naturally in the higher category hotels, but the Stäger Stübli, popular with the locals, has a particularly good reputation for fondue. Of course Mürren offers the unique opportunity of dining in the revolving Schilthorn restaurant during the day.

Mürren's après ski is generally cosy and relaxed, with most of the hotels offering traditional stubli bars. A good way to start straight after skiing is with a 'cake stop' at the Bellevue or a drink at the Gondel Bar. Later on there is music at the Tächi Bar in the hotel Eiger whilst for night owls the Bliemli Chäller should be lively through the night. For a bit of a change, rent a toboggan at a sports shop, take the funicular up to Allmenhubel then sled back down. Alternatively you can go down from Mürren to Gimmelwald and take the cable car back up or, if you want to work up an appetite, walk up to the Gimmelen restaurant, enjoy a meal, then toboggan back down to your hotel.

There are multiple outlets for ski hire in Mürren, including Intersport at Stager-Sport, Alfred's Sportha and Abegglen Sport.

If you want to learn to ski in Mürren, try the local branch of the Swiss Snow Sports School.