Thanks to a weak Krona and a strengthening Pound Iceland is an increasingly popular travel destination and only a three hour flight from the UK. Mark Porter takes us through a pick of the best active trips from scuba diving at Silfra to ice climbing the Svínafellsjökull glacier.

• The Hvítá river flows fast and furious past the famous geysirs in the scenic highlands an hour east of the capital. For more than 20 years this rafting trip has been Iceland´s most popular adventure activity. What you get is a white-knuckle combination of waves, rapids and canyons while rafting the 7km stretch of the Hvítá (pronounced: Kveetau). When you have bounced and bucked your foaming path into the serene calm of the Brúarhlöð canyon you get the chance to clamber out and leap from the cliff into the icy depths
of the river.

• Then there’s rafting on the Markarfljót River, through its towering canyon with glaciers on three sides. This is probably the most scenic of the river trips, starting deep in the interior of Iceland, using one of those specially equipped, unfeasibly oversized off-roaders. After the canyon, the lush Thorsmork valley where there are loads of medium sized waves and rapids.

• In 2008 the Rafting World Championship were held on Hólmsá and this is the most challenging of the river rides. Huge waves, giant holes and mini waterfall as you pass through rolling pastures, mini woods and barren lava fields. Only for those who have rafted before should consider this one.

Go and chill out in a lava cave and take a stroll around a lava field, forged by a relatively recent eruption (no, nothing to do with the banking system). These volcanic fissures give an insight into how the (constantly rumbling) country came to be. The Gjábakkahellir cave is a perfect example of an Icelandic lava tube and is underneath the Thingvellir National Park, Iceland´s most historic site (and handily close to Reykjavik). There is a small amount of scrambling to get beneath the lava field but on the whole this is an easy outing suitable for all the family so long as no-one is under 12. Guaranteed departures: from the 1st of June to the 1st of September. Details: Price around £35 pp, includes pick-up. 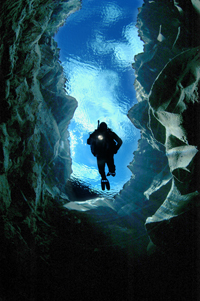 Iceland is home to some extraordinary dive sites providing underwater snapshots of some of the world’s most exciting geographical quirks. The best two sites are Strytan, the thermal chimney at Eyjafjordur, and Silfra at the Thingvellir National Park. Silfra is one of the world’s top diving sites and is the crack in the tectonic plate which separates Eurasia from America. It has a constant temperature of 1–3°C all year around and you can swim in and out of the crack at will. Silfra offers open water diving, caving and deep diving – the depth is about 40 metres when in open water and 60 metres once inside the cave. You will be accompanied by a PADI Dive master or PADI Instructor. It is really easy to dive in this area, because there are a number of different routes to choose from depending on your experience as a diver. It is recommended that you wear warm clothes underneath the diving suit and bring extra clothing. This will not, however, be necessary at Strytan where hot spring water rises from the sea bed 70 metres below. 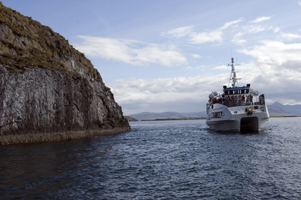 4. Glacier tours Journey – across the centre of the earth, by cat or by foot

Jules Verne based his Journey to the Centre of the Earth on Snaefellsjokul, the 160m high glacier that spans across the Snaefellsnes peninsula. From here his characters entered the earth’s portals for their journey to the planet’s core. You can get up quickly in a snow cat or smaller snowmobile (the snow equivalent of jet skis) or do a tough hike (weather permitting). The views from the glacier are stunning: to the south you can see right across Breidafjordur past Reykjavik as far as Keflavik, and to the north, the fabulous fastness of the West Fjords and the 490m-high cliffs of Latrabjarg, at Europe’s most westerly point. Then there’s Scree Running, for those who like to come down a hill in five minutes, even if it’s been a back-breaking hour to climb up (a bit like skiing without a ski lift or, for that matter, any snow). Also cliff-top walks above black beaches of basalt and other hikes taking in perma-frosted peaks along this majestic peninsula. You will be based in Grundarfjordur at the Hotel Framnes, where staff will look after whichever aspect of glacier touring takes your fancy. The town also boasts a swimming pool and hot-tubs.

This is a three-night, four-day excursion in Breidafjordur in the west of Iceland with Seatours aboard a sturdy but comfortable old cruiser, the Brimrun. There’s fishing, bird-watching, whale spotting and island hopping. One of the high points is hiking on the remote island of Svinanes where you are likely to see one of the rarest of birds in the world, the white-tailed eagle. The trip offers an excursion to Europe’s most westerly point, the 500m cliffs at Latrabjarg, plus a bit of sea fishing, a dip in a natural hot tub in the middle of nowhere and three nights at the lovely Hotel Flatey, on the island of Flatey. This is a favoured spot of the singer Björk and the cooking is outstanding (they cooked our own line-caught cod). You are in the company of experts and even for an ornithological novice it is utterly fascinating. You will have the opportunity to see a lot of puffins and a whole host of feathered friends you won’t spot anywhere else in Europe. We also spotted humpback whales and loads of dolphins on our trip. One of the high points is the seafood feast dredged off the sea bed and gulped down fresh with white wine en route to Flatey.

This is the biggest of Iceland’s glaciers and where much of the Bond movie Die Another Day was shot. The ice walls come in varying shapes and heights and the great thing about this area is its suitability for all levels as there are so many different ascents, from the downright easy-peasy to the terrifying. The scenery is ridiculously wonderful, vast cathedrals of ice and vistas of crystal white perfection. February is the peak of the climbing season in the glaciers, but for Svínafellsjökull the four-hour climbs run from 1 June to 31 August. All equipment, such as crampons and ice axes, is provided and the minimum age is 10. It works out at about £60 a head for a four hour climb. You can also scale the ice at Sólheimajökull glacier a touch further west, where the whole expedition takes about 10 hours, including a four- hour climb.

7. Skiing – from glacier to fjord

Some great opportunities here to cover virgin pistes and whistle from the mountain tops around the Drangajokull glacier in the West Fjords down the valleys and crevasses to the fjords, where a fully equipped ocean-going yacht will pick you up, feed you and take you to the next ascent. This again is provided by Borea Travel (see main feature). Runar Karlsson will be your guide and he will tailor the severity of the descent (and ascent) to your tastes. Based in the remote and beautiful northwestern corner: boreaadventures.com. For more conventional skiing, with the use of lifts and organised pistes there is much fun to be had in the normal winter months, though snow can be a little patchy. Many of the resorts illuminate the slopes to extend day into night. Hildarfjall in Akureyri, the capital of the far north, is Iceland’s premier resort with more than 12 km of top quality slopes. There are also three ski resorts around Reykjavik and Blafjoll is the largest, with 14 lifts. Off-piste skiing runs from February to June, while March and April promise good snow. Many like the softer conditions of May and June.

Iceland is a haven for fishing: unspoiled in every respect, there are loads of unpolluted lakes and crystal clear rivers. The fertile green ‘ring’ surrounding the perimeter of the island offers 5,000 km of coastline and no less than 100 salmon rivers and many more sea-trout and char rivers. Indeed, nowhere else is there more opportunity in such a limited area. Though there are great rivers throughout the country, the Blanda river is reckoned to be Iceland’s Tweed and Test rolled into one. The Blanda is one of the longest rivers in Iceland and migration requires mounting difficult falls near the mouth, and navigating heavy flows to reach the spawning grounds.  The laws of natural selection have produced a strain of large and exceptionally strong and acrobatic fish. The river’s source is glacial and many of the salmon weigh more than 20lbs. It averages more than 1,000 fish per season on its three beats and there is plenty of family accommodation in this wonderful wilderness between the West Fjords and Akureyri. There is an abundance of sea char in the area plus plenty of sea fishing opportunities for those who fancy the easy challenge of cod.

Eating in Reykjavik: You will doubtless find yourselves overnighting in Reykjavik where there are some excellent restaurants. Here is a short list of my favourite eating spots:

O Restaurant at the Hotel Odinsve: Eythor Runarsson is one of the country’s top chefs. Modern setting, modern cooking. Try the lobster, char, smoked lamb or local cod, or go for the tasting menu at around £40 for all the tastes of Iceland.

Saegreifinn: At the other ending of the scale there’s the Saegreifinn, an old fish shack run by a retired fisherman, Kjartan Halldorsson, down in the harbour. You can eat seafood kebabs for under £5 and lobster soup, rated the best in the world by The New York Times.