A Day in the Life of the Ski Patrol Team

Videographer Bethany Mercer and photographer Jay Haysey follow a day in the life of the La Clusaz ski patrol team.

It’s 6am. It’s pitch-black outside, the snow lit only by the yellow headlights of a piste basher. The thermometer is refusing to creep above -10 degrees. I’m shivering in my jacket, but it’s just another working morning for the pisteurs secouristes, the ski patrol team who keep the mountains safe in the French ski resort of La Clusaz. And this morning, we are awake before the dawn, ready to go and create some avalanches.

With 125km of pistes, the ski area of La Clusaz, in the Haute-Savoie region of France, spans four epic mountain ranges: Beuregard, Étale, Aiguille, and Balme. It’s a whole lot of mountain, but just 40 ski patrollers (and one heroic dog) are tasked with keeping the pistes, and the people using them, safe all winter.

I was here with photographer Jay Haysey to shadow the ski patrol team for two weeks in order to create Beyond the Pistes, a film documenting their working lives. I got to work, eat and ski with the patrol, and every day was different. I filmed them rescuing skiers, opening pistes, taking weather reports, blasting ice walls and avalanches, preparing dynamite and letting loose with a little free skiing in between. And what I learned is that without these guardians, the mountains would not be the magical playground that we all love.

A day in the life of a patroller usually starts with an early morning meeting, where the team discuss the weather and flag particular slopes to keep an eye on due to wind exposure or fallen snow. Then they head up the mountain before the lifts open to the public at around 8.15am.

The 40 patrollers of La Clusaz are split into area teams covering the entire ski resort, and each season teams are rotated, so they never spend multiple years in the same location. The areas have their own challenges and rewards. Balme, I discover, is really exposed, with plenty of off-piste and advanced slopes – patrollers here often deal with very tricky rescues. Beauregard is a favourite with beginner skiers and snowboarders, but that means it’s busy, and there are plenty of crashes! Most of the team like working in Balme, so they can brush up on more complicated mountain rescues. 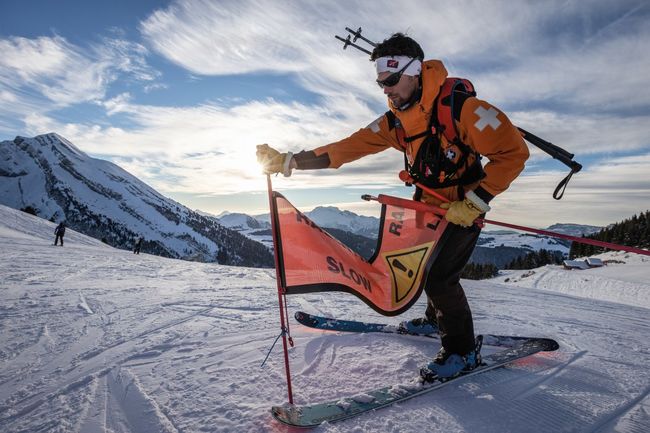 Once up the mountain, the patrollers take weather readings and report back to the French Met Office, then do a sweep of all runs, checking the piste markers are in the right places and that pistes are clear. Once the pistes are open, they stay on call all day for any rescues - the number one priority is the safety of skiers and snowboarders.

A clear and present danger

We’ve all seen the grimly-monikered ‘blood wagons’  being sped down a piste, but it’s fascinating to get to shadow the patrollers as they respond to a call. The first is a child who has dislocated their shoulder. There are a few ways to transport an injured skier off the mountain. Patrollers can ski down to the valley with a sledge to the safety of an ambulance or the medical hut, or if the accident is on a flatter slope, they use a skidoo. And if a situation is more serious or more remote, the injured person will be airlifted off the mountain by helicopter. 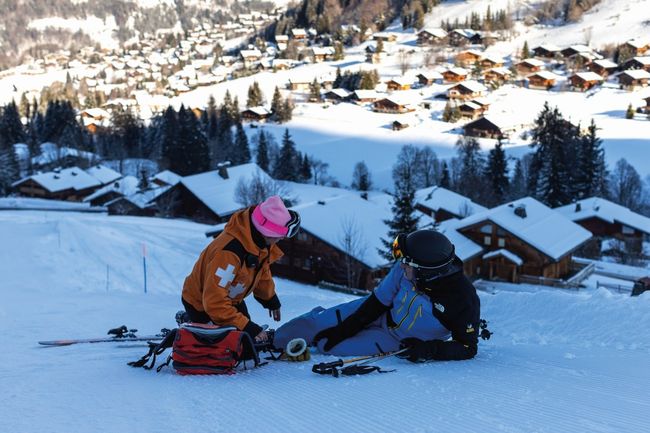 When they aren’t getting people out of danger, the pisteurs are often taking on their own dangerous task – setting off controlled avalanche bombs. No matter how trained and controlled the patrollers are, avalanche setting is the most dangerous part of their job. There are two different methods of avalanche blasting. The first is to programme gazex (these are the silver tubes that you see coming out of mountain sides) to create controlled explosions that can be automatically triggered.

But the other method is far more adrenaline-fuelled. The patrollers meet early around 6am and head up the mountain in the piste-bashing machines. They hike to certain off-piste areas with their skis on their backs and then set off avalanches by lighting sticks of dynamite in key areas of the snowpack. This job is always done in pairs - one person is on lookout and the other patroller skis into position and lights the dynamite. Once lit, the patroller has around 90 seconds on the fuse to ski out of the way and watch the explosion from afar. There’s definitely no time to mess around.

As I watch Theo light the dynamite with a flimsy match, I feel adrenaline pumping through my body. “It’s burning”, he reports calmly into his walkie talkie. Moments later, a huge rumbling wall of snow speeds down the mountainside, but not before the patrol team are safely out of harm’s way. This task gives the team a healthy respect for the power of the mountains. “When we go out to blast avalanches we’re alone in the mountains – it’s just us. And it’s important to feel a healthy amount of fear when you drop the bombs.” Jeremy tells me.

There’s another feeling that strikes me after a week of shadowing the team - the tremendous camaraderie amongst its members, who range in age from 21 to 64. Some have patrolled these slopes for decades, like veteran François, who tells me over a steaming cup of coffee that he has been a ski patroller for 33 years. “For this job you need passion. You really need to love the snow, the cold and the natural world.”

In the summer most of the patrollers stay up in the mountains, but do a real mix of jobs, from lifeguards to florists and tree surgeons to restaurant owners. In winter, they work hard and ski hard, but they’re also a close-knit, friendly team. Days are long on the mountain, especially as I’m skiing around with all of my heavy camera gear while I shadow the team, but I’m always made to feel very welcome - on my first day I step through one of the hut doors and am greeted with beaming smiles, a cup of coffee and a lunchtime glass of wine, chilled for me in the snow – this is the French Alps, after all! There’s one member of the team who is everyone’s firm favourite - a three-year-old Belgian Shepherd named Loustic, who is being trained by her dog handler, Nicolas Coutelle, in search and rescue for avalanche victims. 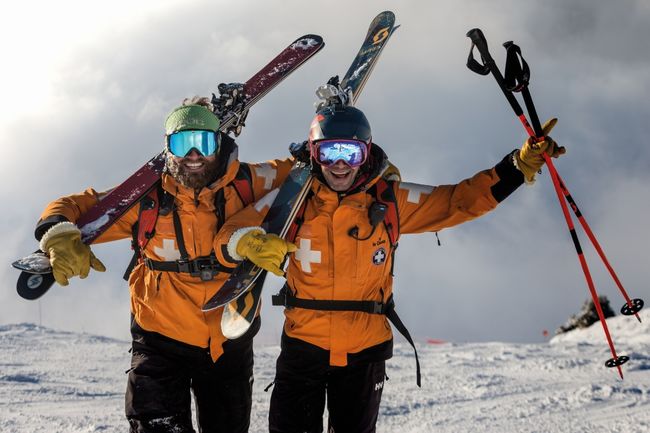 Nico lets me come and film a search and rescue training session off the side of a piste, where he has buried his patient ski patrol teammate Tom under the snow. Loustic is sent off to find him. She sniffs Tom out in seconds, and begins to frantically dig him out from under the snow. Nico tells me that using dogs is often the best way to find people buried in the snow, as they can move a lot faster than humans, and have the most amazing sense of smell for finding victims in deep snow. What strikes me as I watch Nico and Loustic working together is the deep love that all the patrollers, human or canine, share for the mountains.

You might think the team would have had enough of the peaks after long days working in the elements. But where do the La Clusaz patrollers go to let off steam? Yep, they go skiing. The team are amazing skiers (and have to pass multiple tests in order to be on the team). Most of them spend their days off up the mountain freeskiing, mountaineering or hiking, and often end up being in the mountains every single day of the winter, even if they aren’t working. Pierre says with a wide grin, “the mountain – it means freedom. It’s my life!” 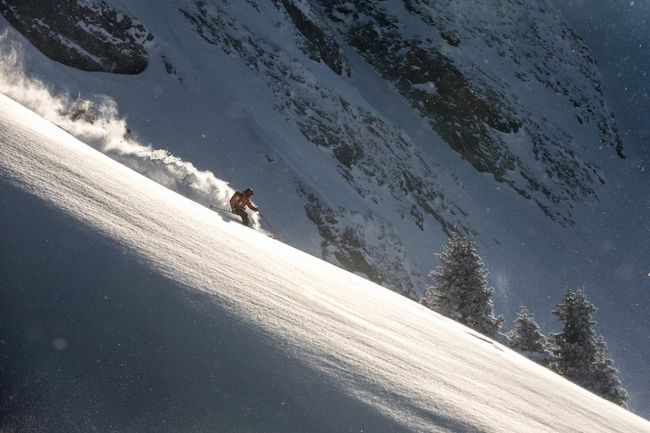 There’s another serious perk to life as a patroller, too – they can speed up the mountain before lifts open to the public and get fresh tracks while they’re opening the pistes. But best of all is the journey home. At the end of a long day of filming I stay up the mountain at 2,600 metres with the patrol team. The lifts close and the sun begins to set, turning the snow golden and fiery red as we set off to ski all the way back down to the valley on totally empty and peaceful pistes. It’s a moment I’ll never forget, and as Jeremy reminds me as we cruise down the slopes, “it’s a true privilege to ski every day. We’ve got a good office here!”