Hear the call of the north? Sophie Nicholson heads for the Highlands to investigate the rise in popularity of Scotland’s gritty, compelling backcountry scene.

It’s time to head north. Scotland is home to one of the most interesting backcountry ski scenes in the world right now, and any passionate skier who has had their eye on the snowball will have noticed the huge increase in coverage of the vibrant backcountry scene north of the border. From social media feeds to branded films and national newspapers, the so-called ‘Bravehearts’ of Scottish skiing have been grabbing the headlines of late. But who and what is driving this backcountry McBeast, and is it here to stay? Dedicated adventure-seeking skiers have been exploring the Scottish winter wilderness for many a year. And while the modern day Scottish backcountry skier may not have to deal with the heavy kit of their forebears, they’re made of similarly tough stuff. 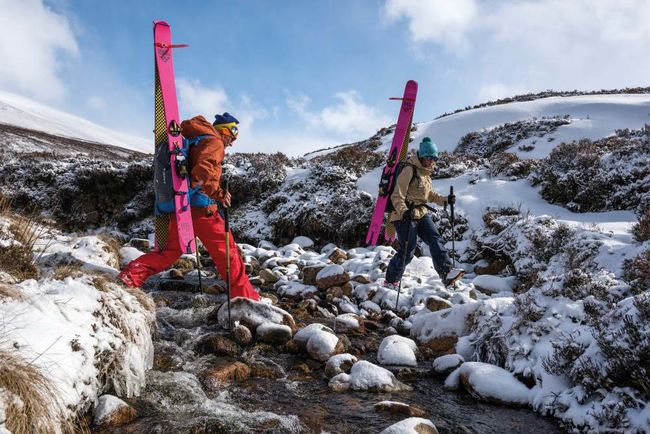 One such skier is Finbar Doig. Born and bred in the Highlands,

17 year old Finbar is one of a new breed of Scottish freeride skiers taking the scene to a whole new level. He landed his first backflip when he was just 12 years old, and while Finbar isn’t old enough to drive himself to the mountain yet, he and his talented freeride buddies have already had a big role to play in launching the current Scottish backcountry scene – all over social media, with viral videos of their backflips and aerial antics.

“Scottish skiing is a gamble – that’s what makes it really exciting. Not every day’s a great day, but that just makes the good ones so much better. When life’s so certain, that element of uncertainty makes you feel alive.” reckons Finbar. 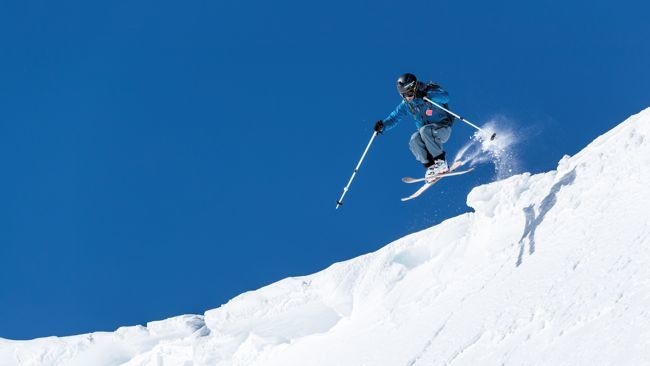 Space for the taking

Finbar’s most memorable line from last winter was filmed by Peter Mackenzie, one of Scotland’s most prominent steep skiers. Together with the likes of Gavin Carruthers, Blair Aitken, Hamish Frost and Scott Muir, Mackenzie has had a huge role in shaping the vibrant vertical scene in Scotland today.

“I can’t think that there’s anywhere in the world that has so few lifts and so much terrain for wild off-piste skiing.”

The real sense of space you feel in the Scottish mountains is unique, and that’s one of the key factors that draws the most well-travelled of skiers north of the border. Further afield from the country’s five managed ski areas - Aonach Mor, Cairngorm, Glencoe, Glenshee and the Lecht – there are miles of empty terrain. As Martin Burrows Smith, one of Scotland’s original steep skiing pioneers, says “one of the reasons I go ski touring is for solitude and peace, and you can get that in abundance in Scotland”.

The absence of mountain traffic in Scotland has a lot to do with the weather and conditions. Always challenging and constantly changing, nothing is guaranteed here, not even snow. This is a landscape that demands high levels of loyalty and dedication, and Di Gilbert knows that well. An independent mountaineering instructor, expedition leader and the founder of Skimo Scotland, Di is the pioneer and driving force behind ski mountaineering racing in Scotland - a niche but increasingly popular sport that sees lycra-clad, fast and light athletes quite literally running uphill before hooning back down on skinny skis. Di spends her winters managing and co-ordinating a series of ski races that appeal to a tiny sub-section of an already niche sport. And she does it in a remote, wild and unpredictable environment where you can’t even rely on there being snow on the ground. 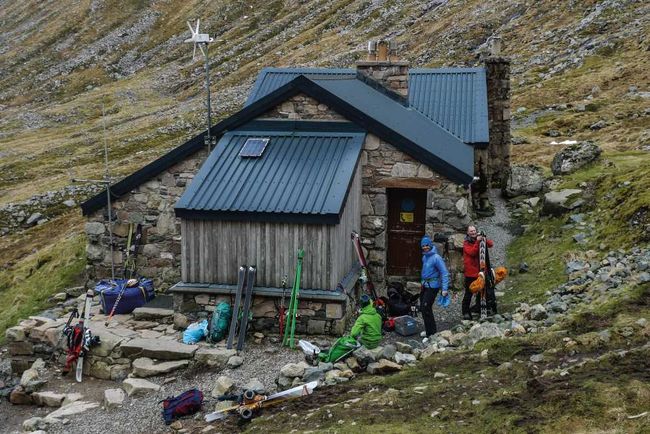 Di and the growing Skimo collective embody the very best of the wider Scottish ski touring community: passionate, friendly and committed. As Di herself says, “as long as you’re imaginative and can work with what you’ve got, Scotland will deliver.”

Of all the pioneering Scottish skiers encouraging and inspiring others to get out into the wilderness, Blair Aitken’s contribution has arguably been the most influential. After a decade in the Alps he returned to Scotland and founded the British Backcountry Facebook group, and this social media community of over 11,500 active and enthusiastic adventure-seeking skiers has given the sport both a focal point and a shared voice.

Blair set up the British Backcountry group with the simple goals of establishing a route information resource and a community of like-minded skiers. Five years on, the group is bigger than he could ever have imagined.

Blair explains, “I started the British Backcountry facebook group as a way of planning trips with like-minded skiers. It’s useful for discussing conditions and for getting to know people who are skiing and snowboarding similar terrain. It has become a great way to help people into the sport, too, and there is a good mixture of experienced outdoor people and new enthusiasts.”

The British Backcountry group has not only given the sport a shared platform, it has helped the likes of Finbar and other leading lights to showcase their talents. Stunning images of skiers launching into steep gullies in wild and remote landscapes have made stars not just of those in front of the camera but of Scottish photographers and filmmakers.

A beauty and a beast

One of the sport’s most prominent mountain photographers is Hamish Frost.

“The British Backcountry group played a huge part in helping me get my photos out there, leading to commissioned photographic work and turning pro,” Hamish explains. “Adventure photography is a pretty competitive industry, so I think shooting the growing Scottish skiing scene really helped my photos stand out when I was getting started.” 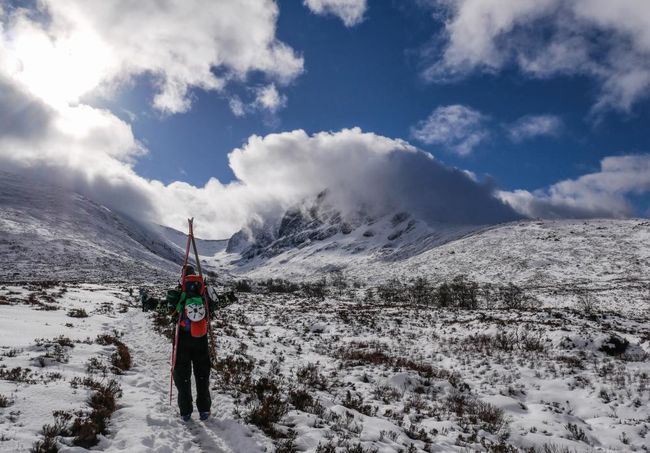 The other main beneficiary of extensive social media exposure has of course been Scotland itself. “We live in an incredibly photogenic country with stunning backdrops, superb light and exciting descents,” explains Blair. “The content being shared has resulted in an increase in visitors, and people are now seeing Scotland as a ski touring destination and an alternative to the Alps.”

Social media may have provided the inspiration, but it’s the increasing availability of modern touring gear that has really made participation numbers go through the roof.

“We’ve seen a significant increase in the appetite for ski touring equipment over the past three years,” says Colin Lyon, Director of Craigdon Mountain Sports in Inverness. “Sales of touring kit are growing by 20% year on year, although the rental market is still pretty small.”

As a member of the Cairngorm Mountain Rescue Team, Colin is understandably reticent to  send people out into the Scottish mountains on hire kit without ensuring they have the mountain experience to back up their ambition. “Learning a new discipline in the Scottish mountains is a tough and risky business and if you haven’t got the necessary navigation skills and snow safety experience then you can get yourself in a lot of trouble very quickly.

If you’re just getting started, I’d advise investing in a ski touring skills course with the likes of Glenmore Lodge.” 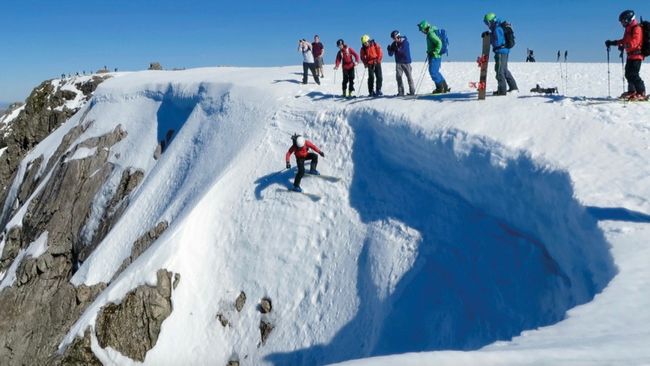 While the relatively rolling Scottish terrain can make it feel more accessible than the Alpine backcountry, the mountains up here are fickle and unforgiving. Up high in the Scottish hills the weather can change fast, it can be easy to get lost and rescues are complicated affairs.

Blair, who now offers ski touring courses and trips under the British Backcountry name, says that “understanding the environment you are going into and how it can change in a blink of an eye is what separates the backcountry from resort skiing.”

Andy Townsend, head of ski at Glenmore Lodge, agrees. “The mountain environment here is unforgiving and takes no prisoners. Scotland’s Highlands are the ultimate testing ground.”

In his role at Glenmore Lodge Andy has played an instrumental role in converting the growing enthusiasm for Scottish skiing into education.

“The number of people attending ski touring courses at Glenmore Lodge is up 30% since 2016. We offer courses for all levels, including Skins & Skills, Avalanche Awareness and ropework courses specifically for ski tourers and freeriders looking to go further, faster and more safely into the Scottish backcountry.”

Glenmore Lodge are also developing a leadership pathway for backcountry skiers and snowboarders keen to make a career out of leading ski touring groups in the Scottish mountains. Glenmore Lodge aim to combine their expertise with Snowsport Scotland to create a new UK-specific ski touring qualification, an initiative that Andy Townsend believes will be “the most significant development in outdoor qualifications in the last 30 years.”

With more and more people getting out in pursuit of their Scottish winter fix, the potential for conflict inevitably exists. Areas of concern include gullies favoured by both climbers and skiers and the ski resorts themselves, where more and more backcountry skiers are using pistes designed for downhill skiing to skin up. Initiatives that encourage parties to work together will be key to preserving a safe environment for all to explore. And if you treasure the solitude that can be found in the Scottish hills and wonder if rising numbers of backcountry skiers will have an adverse effect on the wilderness, let Andy reassure you:

“The increase in numbers and any potential encroachment on space will be minimal. The more ambitious will simply start exploring further afield, accessing really remote areas. And besides, the weather will always help us because the wind resets the landscape in minutes. One man’s tracks in Scotland never last very long!”

Wild, esoteric and challenging, backcountry skiing in Scotland is one of the most rewarding experiences in the world. If you’re packing a good amount of positivity, a sense of humour and a desire to earn your turns, there’s a whole clan of like-minded exploratory skiers waiting for you north of the border.