A couple of gems in the Austrian Arlberg crown, Lech and St Christoph, will take you just far enough from the madding crowd in bustling St Anton

Shuffling in a trouser-rustling, pole-clattering, goggle-dropping throng at the foot of the Rufikopf lift in Lech, it seems as if every skier in town has the same idea as we have - to ski Der Weisse Ring - the White Ring. 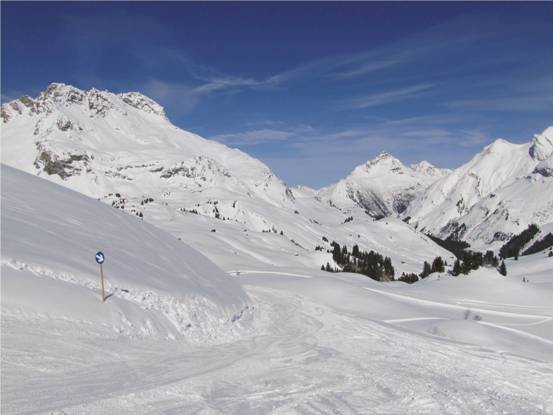 A famous 22km circuit linking the Arlberg resorts of Lech, Zurs and Zug, it's been drawing in skiers of all abilities from novice to Olympic champion for more than 50 years. Every January since 2006, up to 1,000 enthusiasts have gathered here in Lech to race the White Ring in a frenetic stampede to post the fastest time for the circuit. The record, set by 2006 Olympic downhill champion - and local hotelier -Patrick Ortlieb is a little over 44 minutes - and that includes an unavoidable 30 minutes kicking air on the various ski lifts.

Right now, though, it's not January, it's mid-March, the day after a huge dump has made it an even whiter ring, and it feels like there are still 1,000 of us waiting to get up to the first piste, and the circuit has already been open nearly an hour. It's a bit like being at the back of the start in the London Marathon and knowing that the leaders will cross the finish line arms aloft a matter of mere minutes after the race chip tied to your trainer has just bleeped for the first time.

But we're not expecting to set any records today, unless its for the slowest circuit. This is simply a grand day out in this glorious corner of the Austrian Alps.

You can start the White Ring in Lech, Zurs or Zug - and you only ski it clockwise. Any competent skier can do it; it's a mix of blues and reds, with only one tricky section - the potentially bumpy ski route 33 down from the circuit's highest point, the 2,438m Madlochjoch. Unpisted in theory, some days the Madloch skis beautifully, but it can get choppy or icy. After two days of fresh snow we met some serious bumps. Top tip for ring-bearers: hit this stretch early in the day, it gets much bumpier in the afternoon.

Lech is the traditional start, with the Rufikopf cable car climbing to 2,337m. The first stage is the descent towards Zurs, via the Schuttenboden t-bar, the Trittalp cable car and the fabulous Hexenboden piste into Zurs. Smooth skiing amid stunning scenery. Now climb to 2,444m via the Seekopf cable car. At the foot of the next climb, up to the Madloch, expect the circuit's longest queues since the start. Feed in to the left - it's a bit quicker that side. It's here, too, that you can mark for another day the new Muggengrat six-man chair that offers an enjoyable blue back down, or a long red back into Zurs if you feel like bailing.

After the thrills of the Madloch descent bring you into Zug, take the long, slow, windy two-man Zugerberg chair up to last stage, across the Kriegeralpe to Oberlech. The circuit is well signposted, so you can do the purist thing and just ski the race route, but take your time and after a pit-stop at the top of the Kriegerhorn, you can explore some lovely terrain, especially on the north facing slopes off the top of Zug Hochlicht, from where you eventually descend down past Oberlech into Lech to toast your achievement with the town's best gluhwein in the Krone bar, which also happens to be a great place to hang out when there's a whiteout... 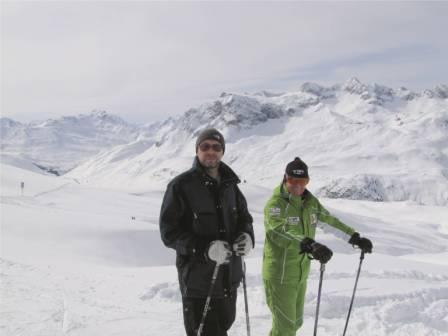 The White Ring race is already legendary, even after just five years. Grabbing just a slice of it by skiing the iconic circuit is the highlight of any visit here.

Lech is Austria's answer to Klosters in Switzerland or Courchevel in France. You can do it cheaply, but it's so much better to do it in style. We stayed at the Hotel Goldener Berg, in Oberlech, where during the ski season the only vehicles you'll see are the piste bashers that pass outside the restaurant window. Just getting here feels different. No cars or buses to drop you by the door. Instead, you take the cable car up from Lech, and then stroll up a snowy path to the reception. Don't worry about getting your Louis Vuitton wet - your luggage gets ferried there on an electric cart via the Oberlech catacombs, a fascinating underground network of tunnels linking the various hotels with the cable station. The 770 metres of tunnel were started in 1995 and completed in 1996. Lucky luggage.

There's something about peering over your balcony at the Goldener Berg that makes you feel above the herd. I mean, how can you not feel a bit smug when you're even looking down on Lech! Book time here for a spa treatment, using the exclusive edelweis-extract 'almstern' range of pampering products and relax in the outdoor whirlpool. Wine-lovers could stay here every day for more than two years and not drink the same bottle twice - the unrivalled cellars are blessed with 890 different wines, including the best Bordeaux collection outside the Goldener Berg's partner hotel, the Hospitz Alm in St Christoph. The hotel runs four restaurants, with as much food as possible sourced locally, and for a 50 euros per person per day fee, guests can eat in all of them whenever they choose by opting for the hotel's 'dine around' scheme.

Lech's 172 miles of mostly intermediate, sunny cruising slopes are separated by a few miles from the more challenging pistes around its Arlberg neighbour St Anton. But one suspects that separation is a bit like a gated community next to a council estate - the fur-clad, deep-pocketed visitors to Lech are probably happier keeping the hoipolloi at bus length.

Lech is a paradise for those who like to be pampered - on and off-piste, but off the planks, Lech still has plenty to keep you occupied - from a new indoor sports park with tennis courts and bowling lanes, to horse-drawn sleigh rides (a round trip from Lech to Zug will cost you 55 euros per 4-seater sleigh), snowshoe walks, a climbing wall and a toboggan run from Oberlech to Lech. And if you're here in March you could try golf. Mercedes- Benz sponsor a tournament played on snow and ice, with its own fairways and 'whites' instead of greens. It's not quite the Royal and Ancient - the holes are bigger and no drivers are allowed; the balls may be orange but they can still be hard to find...

BY JOVI THAT'S GOOD
Lech might think it's got ski luxury in its fur-lined pocket, but hugging the roadside at the highest point of the Arlberg pass is the most exclusive resort in the entire Arlberg region and possibly the whole of Austria.
St Christoph is almost too small to be called a hamlet - it's little more than a handful of buildings usually enveloped in deep snow, and represents the last word in exclusivity.

Yes, it's fun to go down the road and party with the ski bums in next door St Anton, but while the Krazy Kangaruh is heaving and throbbing with ski-booted energy, at the Arlberg Hospiz, everything is quiet serenity, a ticking clock of 5-star calm.

If you are going to do luxury, this is the place to do it. Dating back to 1386, when it was established as a refuge for travellers crossing the pass, it was also the birthplace of the Arlberg Ski Club in 1901. Rebuilt after a fire razed it to the ground in 1957, it now has 53 guest rooms and 35 spacious suites (ours had its own real wood fire), its own swimming pool and saunas, an impressive array of artwork, an all-day nursery, a fireside bar, three gourmet restaurants (where you can try a taster menu that includes goose soup, pike, turbot and four different cuts of pork) and the granddaddy of all wine cellars.

The stone cellar of the Brotherhood of St Christolph is more than 620 years old and houses an illustrious collection of large Bordeaux and Burgundy wines; at the beginning of the season, around 18,000 bottles lie in the cellar ready for drinking. The oldest bottle is an 1865 Chateau Yquem.
As a spectacle, it's only surpassed by the cellars of the sister Hospiz Alm, just a few metres up the road.

OK, OK, yes, it's expensive - a week in a standard double in late January costs 3,374 euros. A family apartment is nearly double that. Luckily, the price includes dinner! But this is pampering at its pampermost.

But while St Christolph may be remote, it's far from inaccessible - just two minutes away is a fast four-man chair which takes you up to the top of Galzig, from where the whole of the St Anton pisteworld is your oyster.

If you want to ski where the guides go, that means off the back of Valluga and into Paziel. It's lovely terrain after the first 100 metres, which has to be sideslipped as it's too icy and steep and you wouldn't want to meet the rocks 20m off the side.

For on-piste skiers, drop down from Galzig via Blues 9 & 4 into Happy Valley, or take the number 2 black that
links with the long blue running down to the bottom of the wonderful new, super-duper Galzig bubble. If you go via blue 4, you can traverse across through the trees and come out above Nasserein, or you can work your way via Gampen to the slopes off Kapall. St Anton fans might like to know that the new Rendl lift is now much nearer the centre of town, close to the Galzig bubble. Cuts about 7.5 minutes off the trip up to the less-crowded Rendl reds.

OK, most of us are far more likely to visit St Christoph on skis, coming from the top of Galzig, before returning to our cheap berth in St Anton (via the KK) but if you win the lottery, the Arlberg Hospiz awaits...
www.hospiz.com

EVENT HORIZON
Anyone visiting the Vorarlberg region between now and April 2012 will also be able to catch UK artists Antony Gormley's latest installation. His cast-iron, life-size human figures - familiar to anyone who saw them standing atop London buildings and landmarks until last year - are now dotted about the mountains, 100 of them in a horizontal line at just over 2,000m, spanning 150 square kilometres. Some are accessible, many are not. Horizon Field is the first such installation in the mountains and the largest ever seen in Austria.

Gormley says of the art project: 'Horizon Field asks: "Where does the human project fit within the evolution of life on this planet?" The works form a field in which living bodies and active minds are involved in measuring the space and distance through the field of these static iron bodies, and of course both skiers and hikers will be part of this. This installation recognises the deep connection between social and geological territory; between landscape and memory.'

Five Reasons to Book a Package Ski Holiday this Winter