Daniel Wildey heads for the French Alps but escapes the crowds and finds a spring powder fix in the backcountry of the Vanoise National Park.

It’s a long drive from Geneva to the Alpine town of Val d’Isère, but I usually get excited watching the snow drifts pile up ever higher on the roadside. Now, in mid-April, we are almost at the turn-off for Tignes and the roads are bare. And it’s raining.

It’s tricky to know how much snow to wish for on a spring ski tour. Too much soft snow is energy-sapping on the climbs, too little can make the descents awful. Rain is definitely the last thing you want.

But as we emerge out of the last tunnel before Val we’re greeted with the full jump-to-lightspeed effect of the rain transforming into a heavy blizzard of white snowflakes – the prospects for next two days suddenly seem a lot better. As we pull up in town the snow is beginning to settle; after a quick check-in and turn-around to head out for dinner there’s a good 15cm of fresh powder on the ground. Just enough to freshen up the terrain ready for tomorrow.

Spring skiing is always a gamble, but a blessing by the snow gods is one of the benefits of heading to a high altitude resort at the tail-end of the season. Now my focus is to seek out the peace and solitude of ski touring from a base in Val D’Isere, one of the busiest mega-resorts in the French Alps, and to see how much of the backcountry I can explore in just two days of touring.

And herein lies the irreplaceable value of hiring a local guide. I’m in the Alps to sample the services of an innovative booking platform for ski instructors and guides; an app called SkiBro (skibro.com), which promises a much more personal experience than you might be used to when seeking out a guide. 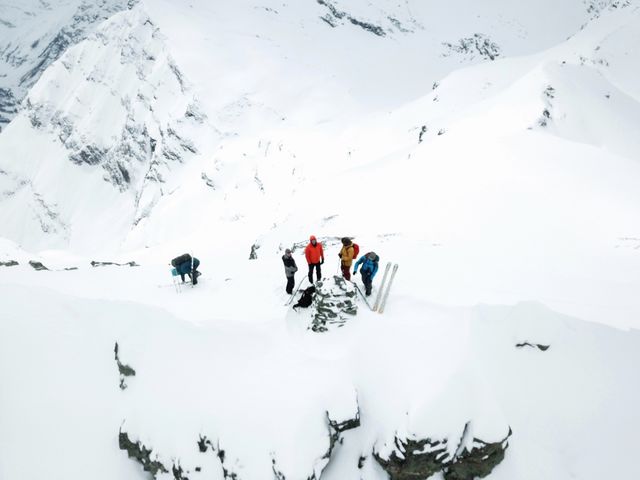 Our locally-based guides, Nico and Matteo, know exactly where to take our group to escape the crowds and hunt down quiet, track-free valleys. We pack up our rucksacks with safety gear and head out, our destination an overnight stay at the remote Refuge de la Femma.

After a warm-up lap in that boot-deep gift from the heavens we use the lift system to access the top of Grand Pré and find even better powder down the first stage of the Tour de Charvet route. The whooping from all concerned signals that our adventure has begun. We wave goodbye to the lifts and blast down a short but cracking descent, none of us giving the resort so much as a backwards glance.

The downhill is necessarily shortlived, and a long, shallow valley meanders up towards the Col of Barmes de l’Ours, ready for our skin tracks. We head over to the south side of the ridge and look down at our destination, a pretty wooden refuge sitting 700 vertical metres below us in the valley.

We skirt around searching for the best line into the remote valley, which couldn’t be further from the busy slopes of this morning. The only marks on the pristine snow have been made by chamois, and the only sound of uplift we encounter is from the rotors of the drone. Here we are directly adjacent to one of the most popular ski resorts in Europe, with a vast, untouched stash of terrain. The only tracks are the five left by our gang.

The snow is… not the best. Bullet-hard, not-yet-sun-softened. But that doesn’t diminish the unexpected remote beauty of the place a bit, and we’re all grinning by the time we reach the comfort of the Refuge de la Femma.

The refuge is similar to any in the French Alps, meaning it is rather extraordinary. It blows my mind that someone has lugged a cast-iron woodburner this deep into the Vanoise National Park. We are miles from civilization, and yet the cooks here can slow-cook beef until it melts, crisp their dauphinoise potatoes to perfection and create a beautiful lemon tiramisu all while living, to all intents and purposes, in a snow drift. 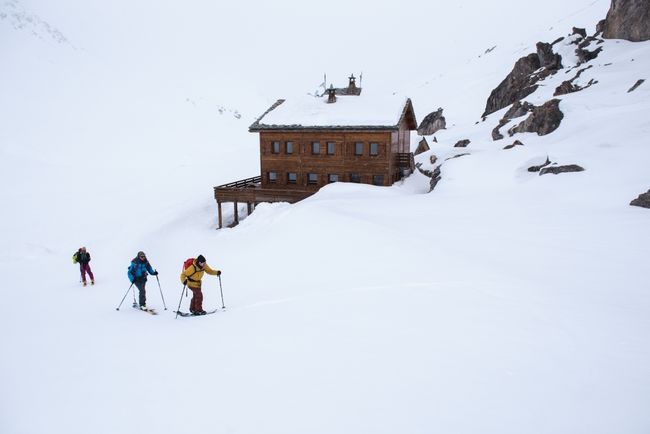 I get possibly the best night’s sleep I’ve ever had above 2,000 metres and wake up raring to go.  Today’s goal, the summit of Mean de Martin – predictably reduced to ‘Mean Martin’ in a prosaic English pronunciation – looks both ominous and miles away.

There are easily half a dozen peaks between us and it that would make perfectly good ski destinations, but having a guide means  that someone with far more local knowledge than me can set our objectives and confidently push our group further.

Matteo and Nico have us up early and skinning hard, but I find a rhythm and it helps my routine when the first sunlight to creep over the mountain is caught on the millions of frozen particles hanging in the air and diffused by wisps of cloud to create soft shadows against every golden ripple in the snow. The beauty of the landscape and the freshness of dawn breathes extra life into the weariest of legs.

From our original scoping point at the refuge at 2,300 metres the long, flat route incorporates two significant ‘steps’ and then a final steep push to reach the summit at 3,330 metres. “It’s a lot of altitude gain but it’s a fairly gentle climb,” says Matteo reassuringly. I’ve come to realise this is not a plus point when starting from high altitude, as walking along the flat is almost as tiring as climbing. But I find technical aspects like kick-turns make the time fly by.

The first half of our climb is by far the hardest – it’s a long, weary slog and there’s more ahead – but by the second half I feel inspired by the views and the imminent descent and exhilarated from the more technical sections we’ve covered. 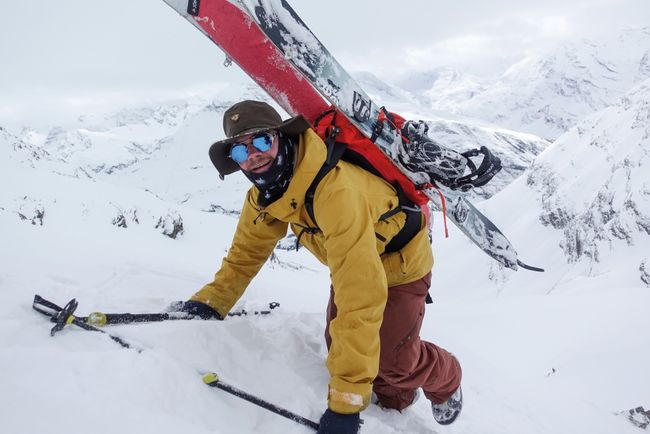 One of the steps we’d seen from the refuge involves two very tricky kick turns on a 40-degree slope that is loaded with heavy snow. This is swiftly followed by a steep boot pack that puts us 30 minutes away from the summit. The final approach up a corniced, knife-edge ridge is simply superb.

Dropping in after summiting is tricky. We have to carefully break through the substantial cornice and then follow a shoulder ridge that sits above an incredible long powder field – the kind of massive untouched slope you see from a distant chairlift and wish you were skiing.

Later in the day it will be ours for the taking. More kudos for the Refuge de la Femma - the packed lunch they’ve provided is fantastic, and even our Italian-born guides comment on how excellent the pasta is, served in cardboard and with wooden utensils to avoid single-use plastic.

Time for another long pitch of powder and another skin up to a peak, its flanks covered in perfect spring snow. A minimal bit of traversing takes us to a steep drop into the valley that leads back into Val d’Isere. The snow this low down has been cooked by the sun and turns into a heavy, slow avalanche - enough to have us hightailing out of the gully; poling and skating our way back into the safety of the lift system. 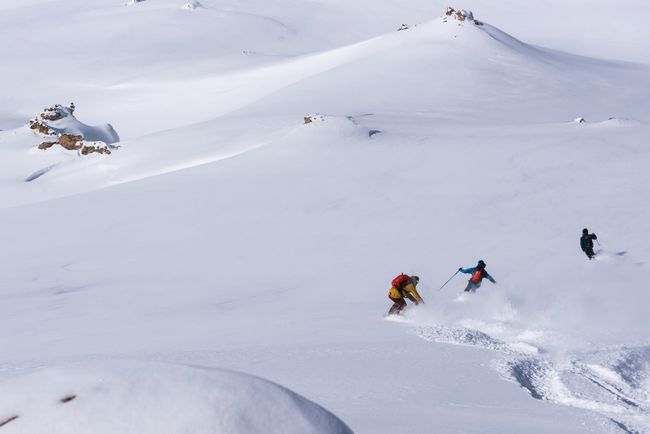 Just before we rejoin the crowds I take a look back towards Mean de Martin and realised just how imposing it looks, dominating the horizon outside of the Espace Killy, and how downright adventurous our route must have seemed to those within the resort boundaries. I realise how accessible that vast wilderness really is, as long as you arm yourself with the right skills, gear and guides. We’ve explored the wild backcountry of the National Park, but have never really been far from the madding crowds.

Daniel travelled with Easyjet, who fly from London, Bristol, Edinburgh, Liverpool and Manchester to Geneva daily throughout the winter.

Daniel stayed at the Refuge de la Femma, a wooden hostel in the heart of the Vanoise national park with private rooms and dormitory accommodation available on a catered or self-catering basis.

We booked our guides through new app SkiBro, which allows you to choose the right person for you and book directly through the app on your phone.

Skiing within the Espace Killy in the Tarentaise Valley is excellent and varied. Off-piste, we recommend you take an experienced guide. 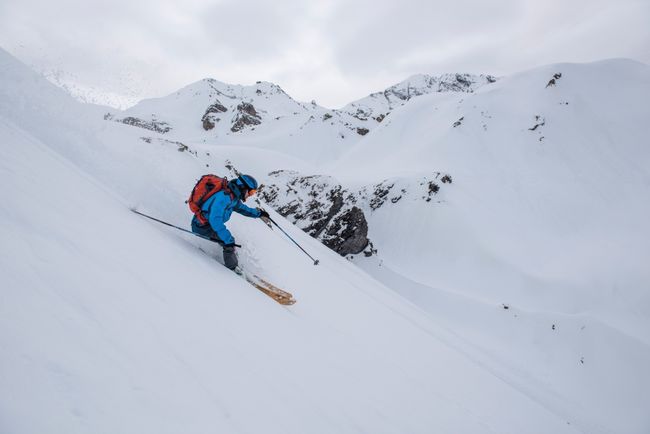 Arguably the queen of French off-piste, Chamonix’s mountains can be steep, deep and dangerous to know, and some chutes are best tackled by pros. Intermediates will love the Vallée Blanche.

Fancy an open powder field or a day of gliding through trees? Alpe D’Huez’s backcountry is varied and often quiet.

A great all-rounder - if you’re new to backcountry and touring this is a good base from which to hire a guide and cut your teeth on La Plagnes’ wide bowls. There are challenges too, such as the steep Glacier col du Nant.