Family skiing in Scotland – swapping the Alps for the Cairngorms

The overnight train to Aviemore makes Scotland an easy, exciting family trip but what’s the skiing like? Susannah Osborne finds out…

Going to sleep in one country and waking up  in another is like magic, especially when you’re five. It’s 8.45pm on a Friday evening and I’m on a noisy platform at Euston Station, in central London, chasing two very excited girls down the train side as they drag their wheelie bags at dangerously high speed.

We’re destined for Aviemore, in the Cairngorms National Park. For me skiing in Scotland is a first. Tales of zero visibility, biting winds and intermittent wet snow have, frankly, put me right off until now.
But after last year’s long drive to the Alps, a trip that involved projectile vomiting, endless hours of Charlie and Lola and left the car looking like a skip, I’m relishing the prospect of arriving by train. 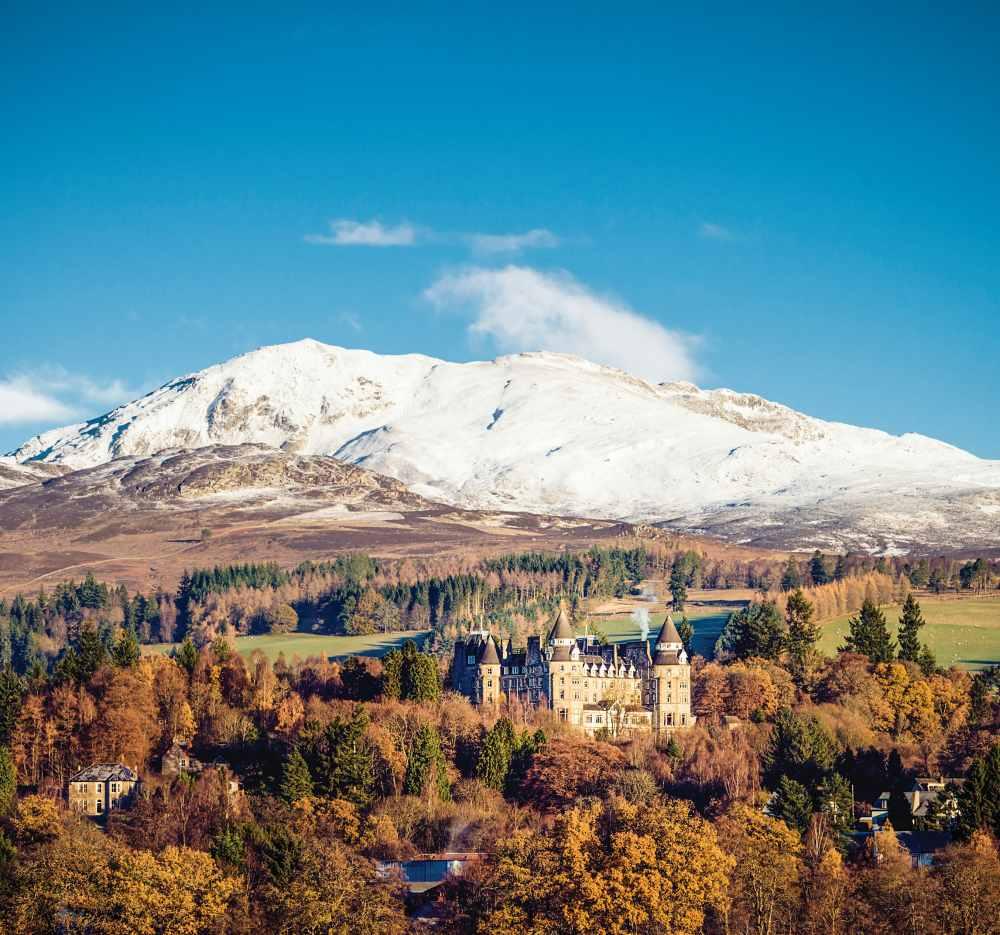 The next morning a firm knock at the door of our cabin from our guard wakes us with a start. The girls yank back the curtains in excitement to see that we’re pulling out of Pitlochry – the gateway to the Cairngorms National Park. It’s raining of course but the views are already stunning – dense swathes of heather and gorse, powerful rushing streams and craggy undulating hillsides.

As we travel north the rain starts to lash down but rain at 118m surely means snow at 1,097m – the highest point of the resort - right?  However, I’m assured by the taxi driver, who pick us up just before 8am from Aviemore station, that of the five ski centres in Scotland the Cairngorm Mountain Resort is the most snowsure and is where the snow lasts longest – it is after all the second week in April. He also adds proudly, that it’s “not glamorous like in France, so don’t be expecting any fancy lifts.” 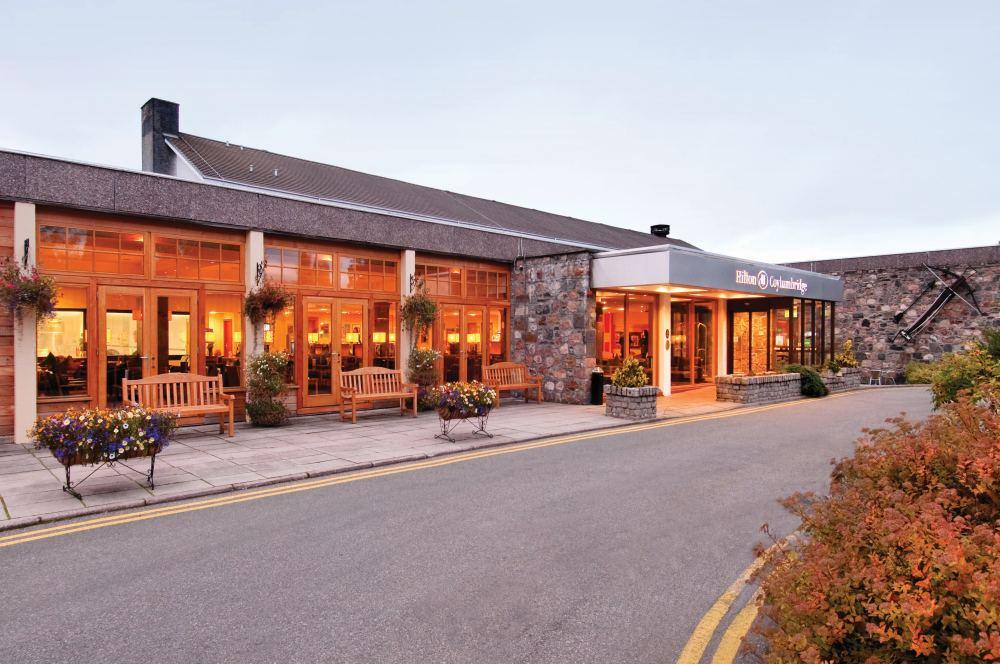 We arrive at the Hilton Coylumbridge, vow to get some rest and within 20 minutes are in the swimming pool, as is the way with small children. By lunchtime we’re ready to head up the mountain. After a 20 minute bus ride Scotland’s only funicular railway takes us from the Cairngorm Mountain Day Lodge, at the base of the resort, to the top station. Mid-season the snow extends all the way down Ptarmigan Bowl and seven runs lead right down to the base but today the mountain is closed below the middle funicular station, snow giving way to a carpet of heather.

Especially well suited to young children the beginner slopes are just a few baby steps from the top of the mountain railway. 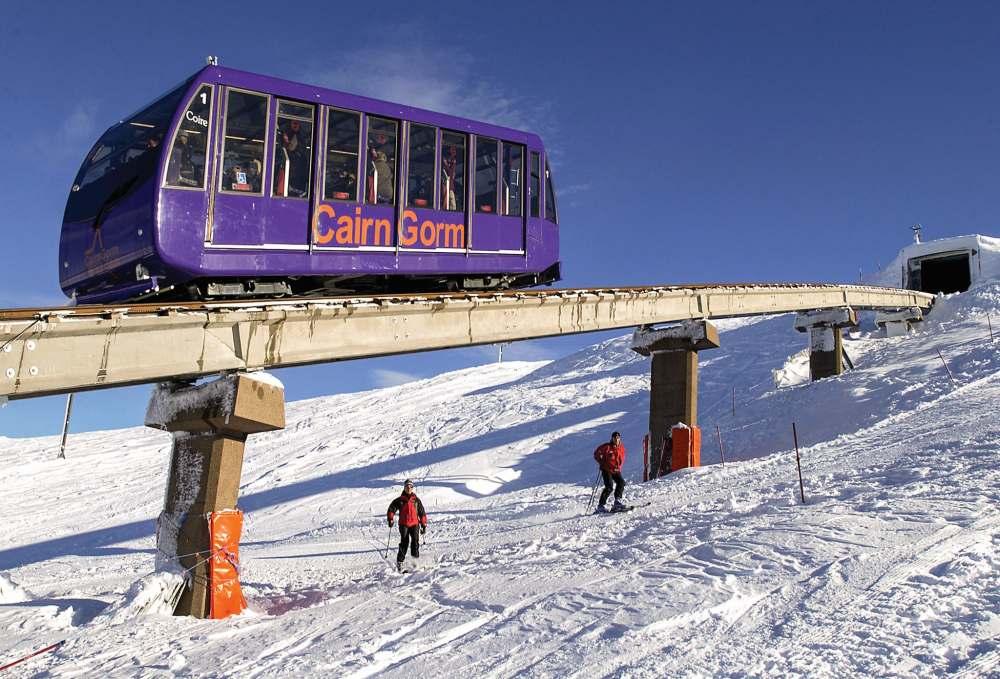 As the kids stumble out of the railway and greet their instructors I peek outside to see that it is indeed snowing at the top; but this is not snow like I’ve seen before – hard, minute crystals of ice are swirling around in a whirlwind that has skiers pinned to the ground. “Welcome to Scotland,” says the jovial funicular driver.

Strangely, the children don’t seem put off and they gladly step out into the blizzard. Our two girls have different temperaments and significantly different attitudes to skiing. Minnie, who is seven, is fearless, gung ho and has perfected the high-speed snowplough, whereas Poppy prefers to take things easy, opting out of our last ski holiday because, “the snow was too slidey.” As she greets her instructor from the Cairngorm Mountain Ski school I brace myself… but there are no tears, so we scarper and head for the eastern side of the resorts. All the lifts on Cairngorm Mountain are either button lifts or T-bars. The taxi driver was right – it’s far from the covered chairlifts and heated seats of Three Valleys. As the M1 Poma hauls me up and past the windswept mounds of snow the storm hits me head on but the instant I throw away the bar, it’s as if someone turned off the tap. 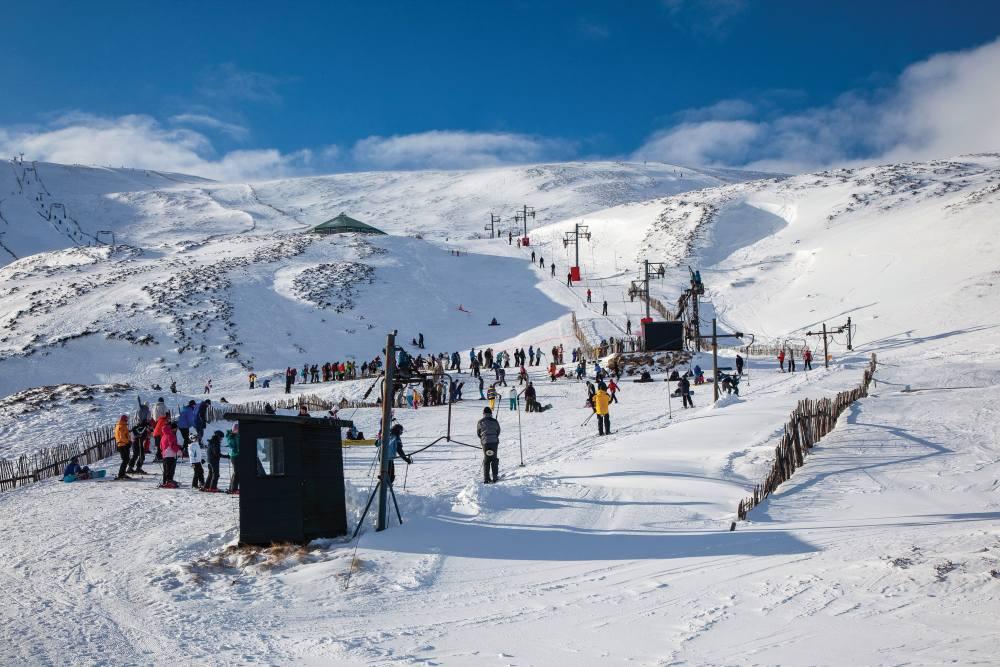 At the top we take the green Traverse to just below Coronation Wall, where we turn to face a stunning scene of blue sky, distant lochs, spinach green forests, and swathes of heather peppered with pools of melting snow. Of the 32 runs on the mountain over half are closed but we session two very satisfying reds – Mt Race Piste and White Lady – not quite believing we’re child free and having such great snow in the UK in April. 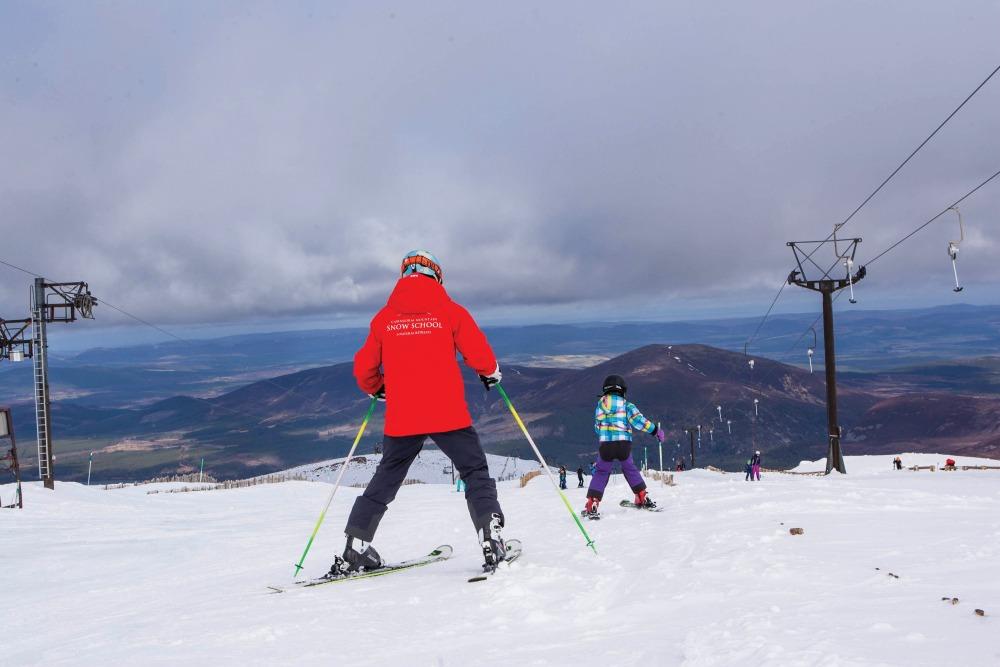 On our second day on the slopes Poppy decides to swap to a Burton Riglet snowboard. This brilliant invention is a mini snowboard on a lead, which allows the instructor to have some degree of control. Poppy takes to this like a duck to water and by the end of the session is getting air on some mini kickers.

Minnie, on the other hand is bombing up and down, following her instructor Tim. In her two-hour lesson she has covered as much ground as she would have on any Alpine mountain. For Poppy, the enormity of the mountains on our last ski holiday scared her but here everything is smaller, friendlier and she is much happier. 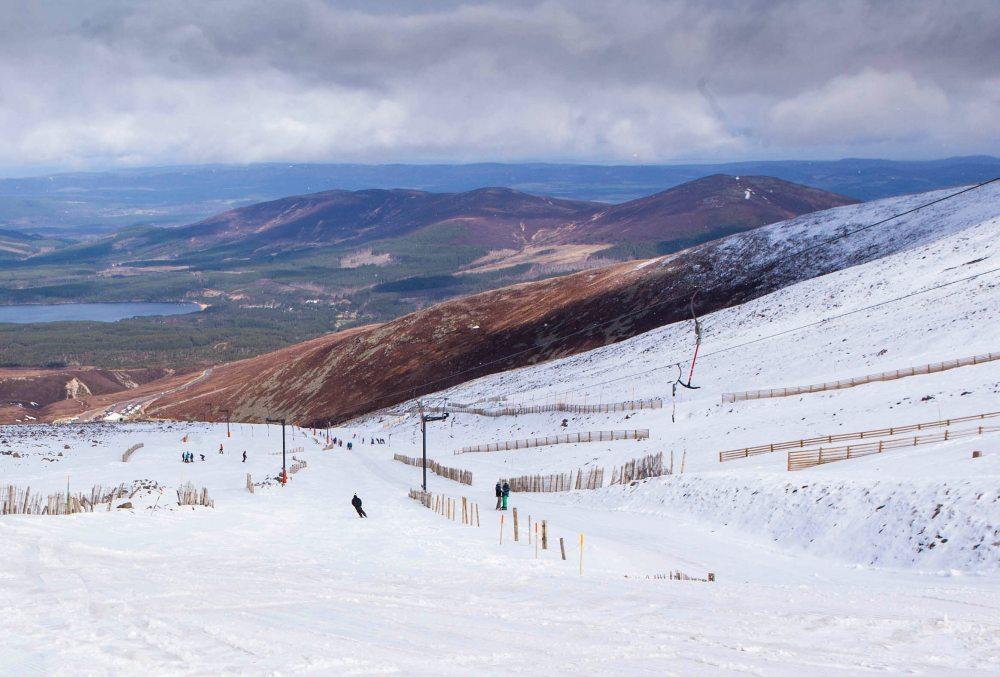 We spend the evening reflecting on the weekend and eating pizzas in the Woodshed Inn – an après ski bar on the hotel grounds. As a family holiday the Cairngorms is a fabulous place to spend a few days away. It isn’t the Alps and it isn’t cheap but there’s a lot to be said for skiing in a true wilderness area. There’s also something deeply satisfying about hopping on a train and skiing somewhere new that’s still on your own island.

Airport Transfers: The mountain shuttle leaves from the base station every hour, costs £9 for our family of four one-way and conveniently stops right outside the Hilton.

Train: Travel was provided by Caledonian. One-way fares from London Euston to Aviemore cost from £40 per person (seated), £150 per person (first class).

Where to stay: We stayed at the Hilton Coylumbridge. At the time of writing a Toddler Package costs from £99 per night (half board) for 2 adults and 2 children under 5. There is a supplement for children over 5. Children under 10 eat free at all time at the hotel.

Where to eat and drink: Food and drink on the mountain is limited to one self-service restaurant serving hot meals, coffee and cakes. However, the Storehouse at the Day Lodge has a more extensive menu serving sandwiches to Mountain Platters and uses local produce wherever it can. A fresh and locally sourced platter of Salmon and Mussels is served here for £14.25
cairngormmountain.org

Make your next family ski trip a real adventure