We tested and rated over 100 pairs of skis from all the major brands to bring you our pick of the 7 best skis in the increasingly competitive freeride category. These are the skis that were made for dreamy days in the backcountry.....

BEST FOR Seasonnaires looking to make the most of the whole mountain.

Dynastar has made some serious tweaks to the range this year and this new model seemed to inspire our female skiers during our 2016 test.

A new blend of rocker and sidecut construction has been added along with a Paulownia wood core to add strength and reduce weight – these skis would easily double up as a touring option.

In short turns they are snappy and playful, in longer radius they are smooth and fl owing, and at higher speeds they are stable. They’re also wide enough to handle powder snow, providing you’re not expecting a big mountain charger, and shaped enough to make powerful carving turns on groomed slopes.

VERDICT - 4.5 OVERALL
One of our standout freeride skis of 2016 that will help you play up on or off piste in any snow conditions.

BEST FOR Advanced all-mountain charging with a hankering for off -piste.

Stablemate to the benchmark Mantra freeride skis, the 90Eights are equally capable of taking your skiing up a level.

In terms of versatility, there are few other skis to match them if you’re looking to ride the whole mountain – they carve on piste, fly over chopped up snow, float through powder and suck up moguls. They genuinely seem to have it all and are also more forgiving than many other freeride skis of similar ilk, so perfect for someone trying to get into the backcountry.

There’s a multi-layer wood core with tip and tail rocker constructed with Völkl’s 3.D ridge, full length sidewalls. They are cambered underfoot too, delivering responsive and lively feel both on and off -piste.

VERDICT - 4.5 OVERALL
A versatile, exciting freeride ski that is capable of taking your off -piste skiing to another level.

Yeehaaa – we could leave the review at that, and it would say it all. Take 1m of powder snow, add one blue bird sky, one hard-charging freeride skier and a pair of Joy’s – result: Big Joy.

At 110mm under foot, they are certainly big but surprisingly they deliver as well on piste as in powder.

One of the elements in the construction of the ski is Graphene – the world’s strongest material. It’s what helps makes the ski so powerful, yet light enough to throw around, meaning that you can twist and turn through the trees as well as opening up on big mountain faces.

Not an obvious all-day piste cruising ski, but at least you know you’ll have fun riding home at the end of the day.

VERDICT - 4.5 OVERALL
One of the stand out women’s freeride skis of the year; solid on piste and simply stunning in powder. 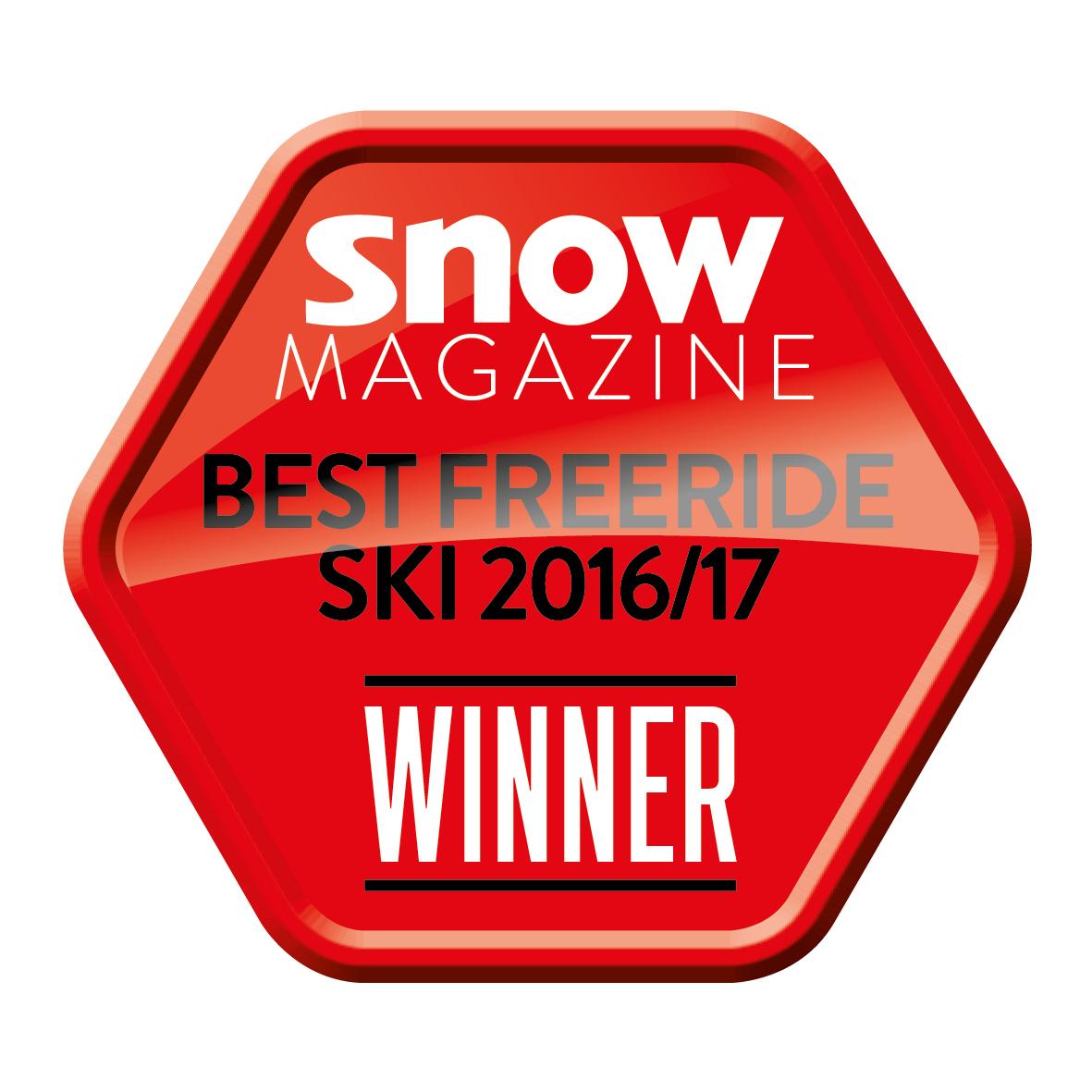 BEST FOR Advanced and expert freeride skiers in search of powder thrills.

Struggling with an answer to your freeride ski options? Then now’s the time to surrender to what became one of our favourite skis of 2016.

The Peacemaker is a complete package – an all-round ski that floats though powder, grips on hard pack, feels stable but responsive in all conditions and is easy to turn.

With a 104mm waist they are more than enough for most skiers, in most conditions off-piste. The bamboo and poplar wood core means the skis remain light despite their large surface area. With a mild rocker at the tip and tail and a camber in the middle, the skis initiate turns with ease but still manage to easily retain control and grip.

VERDICT -  5 OVERALL
A freeride ski that is so versatile it takes on groomers like its warming up for a World Cup Grand Slalom race.

A bit of a handful, this ski is not for pottering about on the nursery slope. In fact, forget about trying to keep it on a groomed run for longer than it has to be – it might still turn pretty well considering its 122mm under foot width, but riding it down the groomers would be a crying waste.

Instead, take it where it belongs; in deep snow, on big wide open steep faces, travelling fast.

But it’s not just a grunt – there’s finesse there too and should you be considering a trip to Japan’s North Island where the snow is light and the trees are tight, then they will still nip around and respond to your wishes, should you be capable of commanding them to do so.

VERDICT - 4.5 OVERALL
A demanding ski that is also fun, surprisingly manoeuvrable and dying to be ridden to its (and your) limits.

BEST FOR Skiers looking to get into variable and off -piste terrain.

A freeride ski for recreational skiers? But why shouldn’t an intermediate skier be able to enjoy the delights of the entire mountain – as long as they are with a guide or instructor?

The Sky 7 HD certainly provides that platform. Built around the hugely successful Soul 7 freeride ski, the Sky is narrower at 98mm underfoot, and more forgiving. In powder or chopped up snow, turn your feet, steer the skis and they just get on with the job, letting you enjoy the experience.

Okay, well they don’t exactly turn themselves, but if you can ski pretty well on groomed slopes and handle a bit of rough terrain, then they certainly make life as easy as any ski could when you venture off piste.

BEST FOR Recreational to advanced off -piste-curious women.

A ski like the Atomic Backland 102W will help you make your first forays into the backcounty. With easy-to-turn feel, lightweight manoeuverability and wide platform under the feet it floats through the powder and powers
through the crust with relative ease.

On-piste, it lacks a little bit of power, especially in the longer radius turns at higher speeds, although the Backland is very easy to steer at lower speeds in both short and long radius turns.

A lightweight wood core and ‘powder’ rocker tip means it would suit a touring set up for shorter tours.

They would suit someone looking to progress from the piste into powder or planning to get away from the marked runs as much as possible.

VERDICT - 4.5 OVERALL
Ideal for any woman looking to progress from the piste to the powder or budding day ski tourers.