Sochi, home of the 2014 winter Olympics

In February 2014 Sochi in Russia will host the Winter Olympics, but you don’t have to wait till it’s all over to try the multi-billion new resort out for yourself. Sochi is already open for business and Snow’s Graeme Gourlay was among the first British ski writers to visit. It was what you call a bit of an eye-opener… 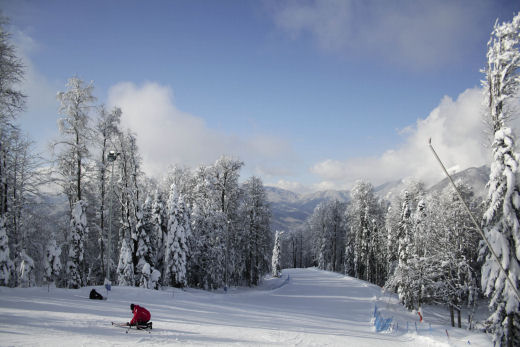 Sitting at the top of the mountain in front of a roaring fire, knocking back Cha Cha (a 46% proof grape vodka) and eating pickled walnuts dipped in honey before starting a seven-course lunch in the flashiest restaurant in an exceedingly flash resort, it dawned on me that this isn’t really the venue of the 2014 Winter Olympics – that is all a front – no, this is the muscular fantasy of the ultimate Bond villain.

Surely no one in their right mind would have spent billions creating a vast ski resort from scratch unless they had a massive ego, a penchant for grandiose architecture – and quite liked skiing.

Enter Vladimir Putin. Much to most people’s amazement back in 2007 he managed to persuade the Olympic committee to stage the 2014 winter games in Sochi on the Black Sea rather than Salzburg or South Korea. It was quite a coup. The sprawling summer holiday resort for Soviet cadres and later Russian new money, was not known as a winter resort. Not only had it never staged a world cup ski event, it barely had a rudimentary ski resort.

Dr Never Say No – or President Putin as some people call him – quickly hired the world’s best consultants and ski resort builders to scour a 400 sq km region of the western Caucasus in search of the ideal location and they picked the tiny village of Krasnaya Polyana and the even smaller hamlet of Rosa Khutor, 30km up in the mountains above Sochi.

Ignoring the inconvenience of a minor regional war just across the border in what was then Georgia and is now the Republic of Abkhazia (only recognised by Russia), the most monumental building project was started. As some sort of guide we spent £11 billion on the London Olympics. At the moment the current estimate for the Sochi Winter Olympics stands at £20 billion and rising…fast.

And out of this ensuing chaos, including a Mafia turf war, environmental angst and allegations of rampant corruption, the area has been transformed.

Gone is the sleepy village where pigs roamed the unpaved streets and the harvesting of honey was the biggest earner. Emerging in its place is a very slick, all-singing, all-Russian dancing clutch of modern ski resorts: Rosa Khuter, which will stage the Alpine events, neighbouring Gasprom (yes, it really is named after the company that owns it) and Gornaya Karusel, with its ski jump and slightly softer runs. Alpika is the home to the bobsleigh.

Armies of builders are working around the clock under arc lamps to finish on time. It is 80 per cent there and early this year I was among the first Brits to sample its delights. Your first impression is one of awe. It is truly impressive – like one of the big North American purpose-built resorts on steroids. Disney does baroque. The resort is run by Compagnie des Alpes, the same firm which runs vast swathes of the Alps including La Plagne, Val d’Isere, Chamonix and Courmayeur. Everything is shiny new. The pistes are big and steep. The Caucasus mountains are beautiful, covered in deciduous forests of beech and birch that shed their leaves, giving the slopes a distinctive grey pattern as if drawn by a fine pencil.

Like Whistler, the previous Canadian Winter Olympic flame holder, it is only 30km from the sea, which results in nearly the same bumper dumps of snow. The week before we visited in February, three metres fell and the Olympic team is prepared to move as much as a metre a night off the slopes. 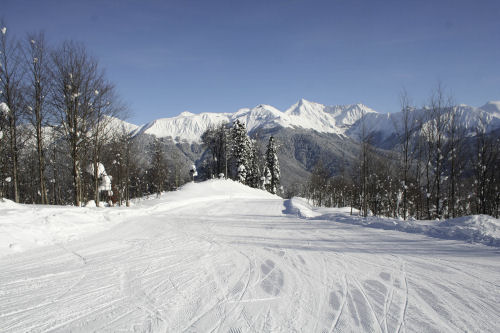 The skiing is impressive. The steep slopes – particularly at the top – produce fast, dramatic runs and the virtually blank canvas has allowed the architects to construct long, wide runs. The precipitous grandeur of the Alps meets the space and scale of the Rockies.

However, the slightly spooky feeling a new resort delivers was amplified by the sheer weirdness of the whole project. It started when we arrived at the brand new (of course) Sochi airport and the bored guards watched us load our bags first through one X-ray security machine (surely you do this when you board a plane, you ask yourself in that dazed stupor air travel induces) only to be led into another room and asked to do it all over again by the Kalashnikov-carrying charmers before you are allowed to leave. No one was actually looking at the security screens.

It is also the only ski resort I know where you go through X-ray security checks at the base stations before being allowed up the mountains. Bemused skiers were clunking through the gates with cameras, poles and who knows what else, setting off a steady stream of bleeps and flashing lights which were duly ignored. And there was a bloody war just a few miles down the road. It was early days. No doubt, come the Olympics, the cigarette-smoking guards will be transformed into the jolly Royal Marine-style security that joked us through the searches in Stratford.

Another bizarre example of it being early days was when the rather splendid hotel we were staying in ran out of vodka – surely a criminal offence in Russia. It was the first week they had ever had paying guests.

They are also going to have to work on that inclusive bit as well. Shutting down whole hotels we were due to visit because the then Russian President Dmitry Medvedev and his cronies want to be alone isn’t quite the spirit, and they have gone one better than the old Soviet-era
Zil-lanes. They have introduced Zil-runs. Whole pistes were shut for the exclusive use of Alexander Lukashenko, the rather scary President of Belarus who was being courted by the Russians.

And that just leaves that other Olympic staple – legacy. After all the hoopla of the games comes the next big question: will anyone want to ski there? The core market is surely going to be the Russians and Putin’s dream of creating a winter playground just a short flight from Moscow will probably work and might even make economic sense in the long (very long) run. But will it lure any Brit skiers? Will you be tempted? Showing a bit of pluck, Crystal are giving it a go and the price is keener than a trip across the Atlantic for your winter fun.

If they could sort out the visa issue (a mind bogglingly complex form, asking you to list every country you have visited in the last 10 years, which has to be filled and paid for in advance) and conjure up some direct flights (you currently have to go via Istanbul – beautiful a city as it is)
Sochi might deliver the legacy of a sustainable winter tourism industry. The skiing is great, the mountains stunning and I’m sure the hotels will not run out of vodka too often.

And if that doesn’t work they can always rent it out as the set for the next few Bond movies complete
with its own cast of power-hungry players bent on carving immortality as well as turns in the snow – Putin might well be looking for a job in a few years time.

The resorts will be linked by a 30-min, fast rail connection direct to the new airport of Sochi. There are currently no direct flights and you have to go via Istanbul. Crystal Ski (0871 231 2256; www.crystalski.co.uk) is offering a variety of packages starting at short breaks from £825, and seven nights from £1,129. The price includes Turkish Airlines (www.turkishairlines.com) flights from Heathrow via Istanbul, transfers and accommodation with breakfast at the four-star Park Inn by Radisson in Rosa Khutor. Sochi can also be reached with Aeroflot (020 7355 2233; www.aeroflot.ru) from Heathrow via Moscow.

If you are staying at Rosa Khuter, then Gasprom and Gornaya Karusel (Mountain Carousel) can easily be reached by taxi. You will need separate ski passes. Lift passes from £27 per day in Rosa Khutor (www.rosaski.com/en) and £29 in Gasprom and Mountain Carousel (www.gornaya-karusel.ru). Three days’ ski hire starts at £39, three days’ boot hire from £23. Group ski lessons start at £25 for two-and-a-half hours. The resort is at 520m and the highest point is 2,320m. More than 100km of runs should be open this season with 19 lifts and two snow parks. The longest run is 4.2km.

MUST DO Ski the men’s downhill at Rosa Khuter – fast and furious. 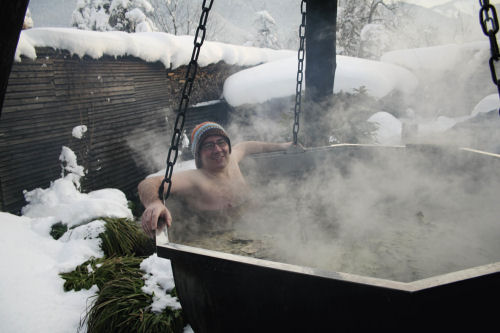 TOP TIP Go to the British Banya in Krasnaya Polyana, run by an eccentric young Brit called James Larkin from Bury St Edmunds, who has created a wonderful and slightly hippy version of a traditional baths in this tiny village in the Caucasus. Get beaten with oak leaves, plunge into freezing water and then gently broil in an outdoor steel tub suspended above a fire.
www.britishbanya.com

BEST FOR Adventurous souls seeking something very different at a reasonable price.