Either the Norwegians truly detest kick turns, or they take masochistic pleasure in hurting themselves. Or perhaps they’re simply superhuman ski-tourers who like to be efficient and direct. I’m none of those things, and feel an embarrassing level of relief when James Thacker – one of our guides for the week – carves out an altogether more forgiving uphill line for our grateful legs to follow.

The flight into Tromsø ought to have primed me for this head-on attitude to Arctic life. If you think the approach into Innsbruck airport is hairy – with the Alps looming large in those tiny windows – try Tromsø. There appeared to be a mountaintop blocking our descent path, and I swear it came close enough to the undercarriage that I could have dropped out on skis and made my own descent.

But beyond the foreground peril was a maze of snow-covered coastline, islands and peninsulas blending into one another making it almost impossible to tell where the mainland ended and the archipelagos began or how far the fjords forged inland. It was a sprawling, disorientating landscape, even looked down on from the sky, all covered with mountains surging out of the dark, glassy sea and draped in a thick layer of snow, with the occasional bubbling mass of cumulus clouds above.

Once on the ground I was met by Alison Culshaw and James, of Chamonix-based Off Piste Performance, and as with any ski trip, snow coverage was the top priority for conversation. Even inside the Arctic Circle it’s a treat to have snow lying right down to sea-level in early May, and Alison and James were infectiously excited about the possibilities ahead of us. We left the city of Tromsø behind – along with the area’s only ski lift – following the coastal road 40 kilometres north-east to Oldervik, noticing that almost every inch of the land was accessible to anyone with ski-touring gear and energy.

Oldervik was deserted; a scattering of simple wooden dwellings stretched along the seafront either side of a harbour. There were more boats than people, and only one road out. Our accommodation for the week was a cosy wooden box behind a huge window filled with the waters of Ullsfjorden and the dramatic peaks of the Lyngen peninsula five kilometres across the water, catching the low sun on their western faces. With a widescreen centrepiece like this there was, naturally, no TV. 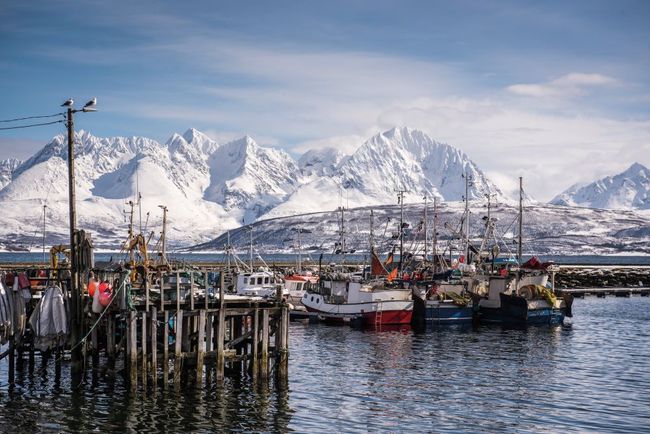 Oldervik is barely visited by tourists, which is partly why Alison and James chose it as a base; it is convenient for Tromsø airport, and the island of Kvaloya is within driving distance. Even the more frequented Lyngen Alps – standing tall across the fjord – are accessible for a day-trip. But more importantly the town delivers the kind of view that I could never grow tired of.

Ski to the sea

Right next to the village is the mountain Ullstinden, standing 1,078 metres proud of Ullsfjorden, and it is here that I have been gazing up at the first of those arrow-straight skin tracks, wondering what baptism of fire lies ahead. Whatever the technical difficulty, it’s not long after setting off before I appreciate one of the real benefits of low-altitude ski touring; it’s so much easier! After a winter spent skiing high mountains, the spring season at sea level will make anyone feel like an athlete. 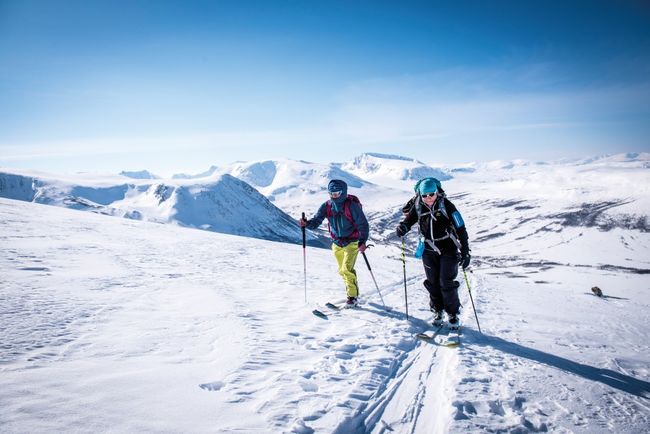 That said, gaining the summit takes an age. The featureless, rounded west face of Ullstinden offers no markers by which to gauge distance, and for a long time it is a slog. Eventually however, we reach a col with an eastward view to Lyngen once again and the sight is an energy booster. It also partially reveals our steep descent line –  seemingly dropping into the sea.

After rediscovering our downhill legs on a wide face off the summit, and tuning into the highly variable snowpack in the process, we drop eastward down a thrilling line with nothing but the Arctic Ocean below us. We pass huge cornices and gaping bowls that remind us we are in a wild place but for all the great skiing, it’s standing in the sea wearing ski boots that will stay with me. A childish novelty, but a memorable one.

The next two days involve driving over to the island of Kvaloya, a beautiful coastal journey to a destination often overlooked by ski tourers, who are much more likely to head to Lyngen or further south to Lofoten. Our first peak is Buren, and while the skiing is similar in character to Ullstinden, the landscape is not. 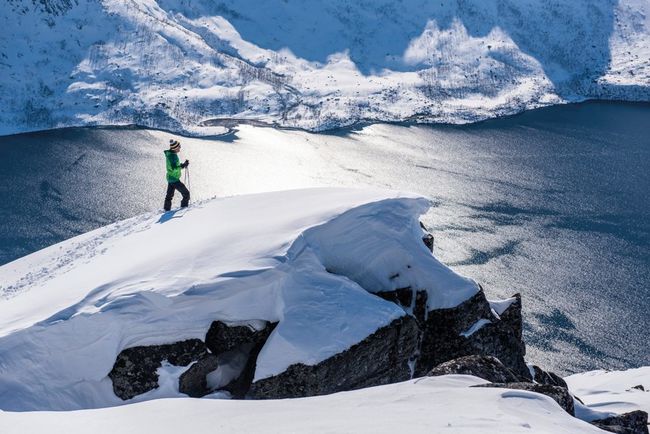 The summit of Buren forms part of a cirque of jagged soaring peaks, as dramatic as anything in the Alps and made more so by the steep-sided channel of Ersfjord around 800 metres below, leading the eye out to sea. The extremities of the landscape serve as a stark reminder that we are inside the Arctic Circle; something that is easy to forget while driving around on a well-maintained road network, or popping into the supermarket. Small details such as ocean waves lapping at snow-covered beaches add to the vaguely odd feeling that really you’re somewhere exotic.

A not-so-small detail is that the sun barely sets, it merely ducks beyond the mountains for a couple of hours and, in some unrecognisable way disrupts your sleep. It also plays havoc with my sense of direction, which makes James and Alison’s guiding all the more remarkable.

Both are adept at ‘working the micro-aspects’ as James calls it – finding the niche lines of good snow among the wind-swept, sun-rotten or temperature-sensitive aspects, where the elements might have combined in a fortuitous way for ski touring. For my part, I struggle to figure out the macro-aspects; given the unkempt geography of the coastlines, which meander around the fjords. With the sun taking a near-360 degree trajectory, I find it difficult even to find north. It’s remarkable how much we rely on the sun – even subconsciously – to get our bearings.

For our second outing on Kvaloya we set out to summit Store Hollendaren – a step up in technicality for both the ascent and descent. It also seems to be more susceptible to the vagaries of the weather, making the snow more varied and our guides’ job more challenging.

We set out on a flat skin – which in less bountiful snow years would be a hike – towards a rearing wall of rock and ice that looks impassable. Icy, undulating terrain takes us through the trees until a weakness in the wall reveals itself, and we follow the line of least resistance past canyons and ice falls. A few steep kick turns brings us to the bowl of a frozen lake, with some stunning lines running into it – one clearly straight-lined for a couple of hundred hair-raising metres. 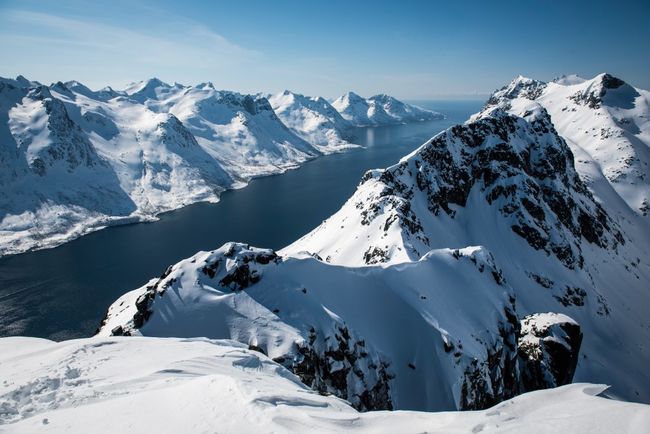 Above the lake, a glacier runs up to the corniced summit-ridge overhanging Ersfjord, and the beautiful rock architecture – plus the sight of a long pitch of perfect powder, judging by the tracks in it – spurs us into a final fast-paced push. The rocky summit turns out to be unclimbable, but nobody really cares as we are all itching to head back down to the powder fields we passed.

Looking back up the slope as my heart-rate calms, I count 50 or 60 turns in each of our lines, and the neatness is a testament to the perfection of the snow. It is a spectacular pitch, wide enough to accommodate a lot of traffic, but seemingly only enjoyed by ourselves and a group from the previous day. 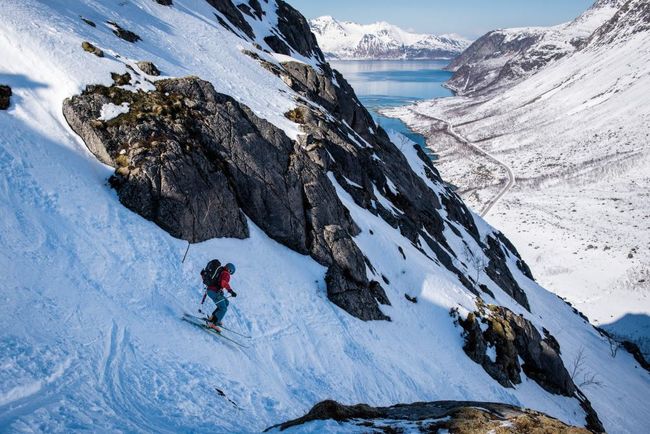 Store Hollendaren continues to prove our most adventurous outing so far, with some technical survival skiing on the steep and icy lower slopes and a section of jump turns to keep our skis free of the hardening crust. I can’t remember such a ‘complete’ ski day.

But there is one more treat for the final day; the renowned Lyngen Alps. We’ve looked longingly across the fjord at their majesty all week, but Alison and James keep their plans fluid and responsive to conditions. So it isn’t until we board the fast ferry to Svensby that I’m sure we are hitting their legendary slopes.

Our objective was Stetinden, 920 metres high and accessed by parking on the beach, then skinning out of someone’s backyard.

The skinning falls into a familiar rhythm but the place seems wilder. We are further down Ullsfjorden and behind us a giant maelstrom is visible where the mouths of two fjords meet, somewhere far below reindeer are being corralled by snowmobiles, and to the south the Lyngen peaks soar upwards.

The summit is our most precipitous yet, and the descent as good as anything so far. In leaving Lyngen for last, Alison and James have shown me huge variety in this small area; on the mainland, the islands and peninsulas. They’ve shown me that Arctic skiing can be accessible as well as aspirational; and that there is a lifetime’s worth of skiing to discover.

Exhausted as I am, when the plane leaves the runway, I am still almost hanging out of the window. The proximity of the mountains to the landing gear is now a blessing, as it helps me scout out new lines for next time... 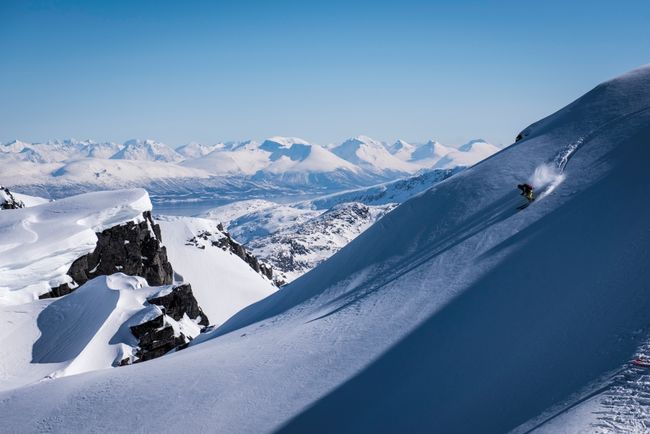 The lightness of being

Ski touring represents freedom for many people. Add in the near-24 hour days of the far north and the seemingly fence-free terrain, and that freedom feels boundless. So it was on one evening with Alison and James, as we decided to sneak in an extra run just up the road from Oldervik.

We’d spotted a couloir from the only road into Oldervik that appeared to be steep and untouched, and setting out around 6pm had all the excitement of a new experience! The couloir was much further away than it appeared, but tangling with trees and stepping carefully over streams is much less concerning when there’s no chance of running out of light; time was no longer a concern, and that level of freedom is a real rarity.

Nevertheless we’d climbed 500 metres up the couloir within an hour, and although the sun wouldn’t disappear for hours, its low trajectory was already creating a wonderful golden light over the sparse forests below and the distant peaks and fjords; a prolonged sunset that made for an unforgettable descent.

Although Oldervik is remote, there is a regular bus service from Tromsø if you want to visit the village independently. However, a rental car makes life infinitely easier for accessing Kvaloya, Lyngen etc..

Daniel went with Off Piste Performance who run several week-long trips in Arctic Norway. Accommodation and meals are included, as well as guiding.