If you're considering skiing off piste this winter then attending a safety course and ensuring you have all the necessary gear is essential, no matter what level of skier or snowboarder you are.

The Snow Magazine team headed to Cervinia to test a range of alalanche equipment under the imposing face of the Matterhorn.

From our tests we put together three avalanche safety packs containing the three essential items - shovel, transceiver and probe to guide you on your way to safe off-piste skiing.

Pack 1 - For the budget conscious

Although this pack is aimed at the budget conscious buyer, it’s still made up of equipment from highly respected and trusted brands. 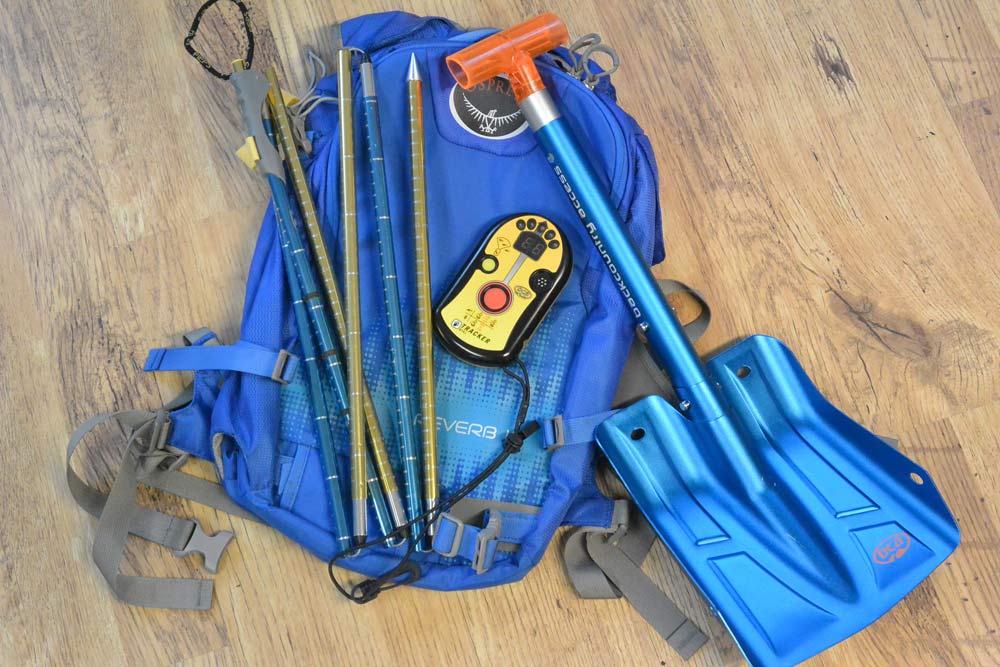 The BCA B-1 shovel is a very basic shovel at a great price. In practice the blade cut fairly well into the snow. Build quality is as you would expect at this price point - some of the connections are a little shaky and the plastic handle doesn’t inspire great confidence. The B-1 comes in two formats, the B-1 and B-1 ext. The B-1 we tested here only comes with a short shaft without any option to extend. Leverage when shovelling isn’t great which ultimately results in more expended energy and slower shovelling.

The Pieps Alu 260 probe has a nice, simple pull cord system which was quick, easy and intuitive to use. The release system was equally easy and effective to use and seemed like it would stand the test of time. One thing we noticed with the Pieps probes is their 12.5mm diameter which is rather on the large side when compared to other probes on the market. Whilst this might aid rigidity when probing it also increases the overall size of the package somewhat and presumably a wider diameter won’t cut into the snow as efficiently as a smaller diameter probe? 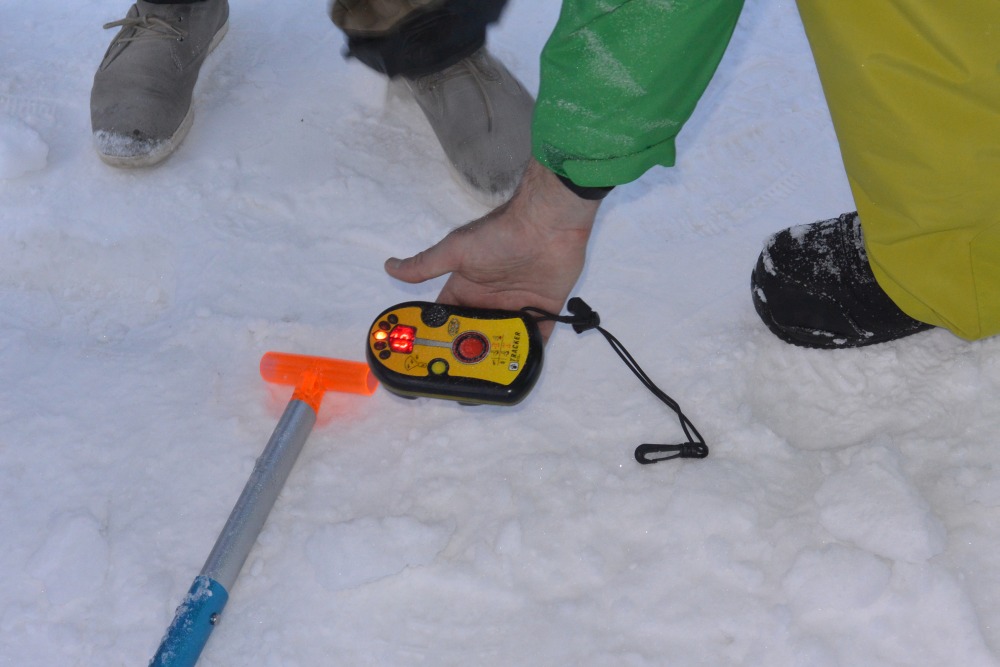 We wanted to include the Pieps Freeride in the budget pack due to it being the most keenly priced avalanche transceiver on the market today at £99. In the end we had to concede that a single antenna transceiver with a relatively slow processor wasn’t a good recommendation for a budget pack especially as those looking to spend less might well be inexperienced off piste or be using this kind of device for the first time. So we plumped for the BCA Tracker DTS due to its relatively low price point coupled with good features and passable performance.

The Tracker DTS is a dual antenna transceiver that revolutionised the market when BCA used it to introduce digital, multi-antennae technology back in the late 1990s. The interface is simple and intuitive, the range falls into the mid-class compared with the competition, as do accuracy and processor speed. If you can afford a little more, then it’s well worth considering an upgrade to the only marginally more expensive Tracker 2 or Pieps DSP Sport.

The Osprey Reverb 18 is a great looking pack that, as ever with Osprey packs, has been thoughtfully designed to work well both for regular skiing/boarding and for short backcountry adventures.

It comes with a convenient and quick diagonal ski carry and horizontal and vertical board carry options and an outer zipped pocket allows quick access to your shovel. This, the handle and probe are stored in external sleeves – and whilst this allows for more internal space it does mean that accessing and assembling your avy gear may take a tad longer than if it was all in one pocket.

There are all the vital features you need in a winter pack (and none you don’t), including a hydration reservoir sleeve which links easily to an insulated shoulder harness sleeve for your drinking tube (the pack is fully compatible with the Osprey Hydraulic Reservoir), a microfleece zipped goggle pocket, an EVA fixed harness with slide adjustable sternum strap and removable waist strap and a compression moulded EVA backpanel with HDPE framesheet which feels reassuringly stable on your back.

Given the price tag and the combination of practicality and good looks, the Reverb 18 is a great option for skiers and boarders looking to enjoy short forays into the backcountry.

Great price vs performance ratio for those with a little more to spend. 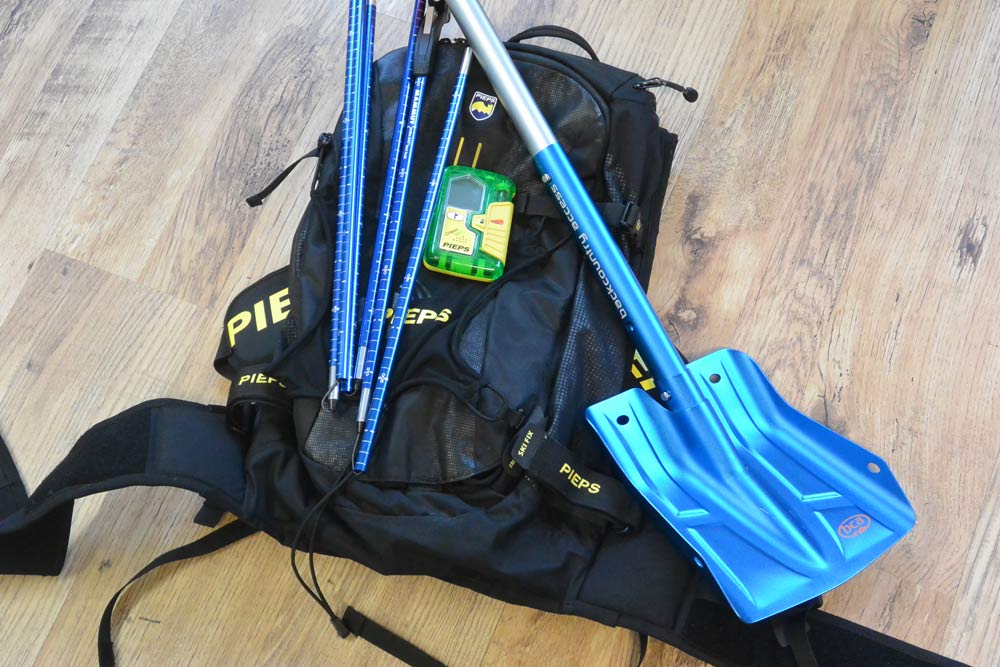 The BCA B-1 extendable shovel is identical to the B-1 but with the addition of an extendable handle. On test this was by far the preferred option over the basic B-1 due to the extra leverage gained from the longer shaft. Although longer than the standard B-1, the shaft still comes up a few inches short of the other shovels on test and there is no option to insert the blade at 90 degrees. Overall then, the B-1 Ext is a fairly basic but reasonably effective option at a great price.

At 225g, the Mammut Probe 240 is nice and light and folds down into a small package thanks to its 11mm diameter tube and 45cm collapsed length. The tensioning system and telescopic lock are quick and intuitive to use and the probe is stable and cuts well through the snow. The bag for the probe also had some very basic illustrations showing the process of the marking and shovelling stage of a rescue as well as some basic safety information. We thought this was a great touch, and one which could potentially help to save lives. 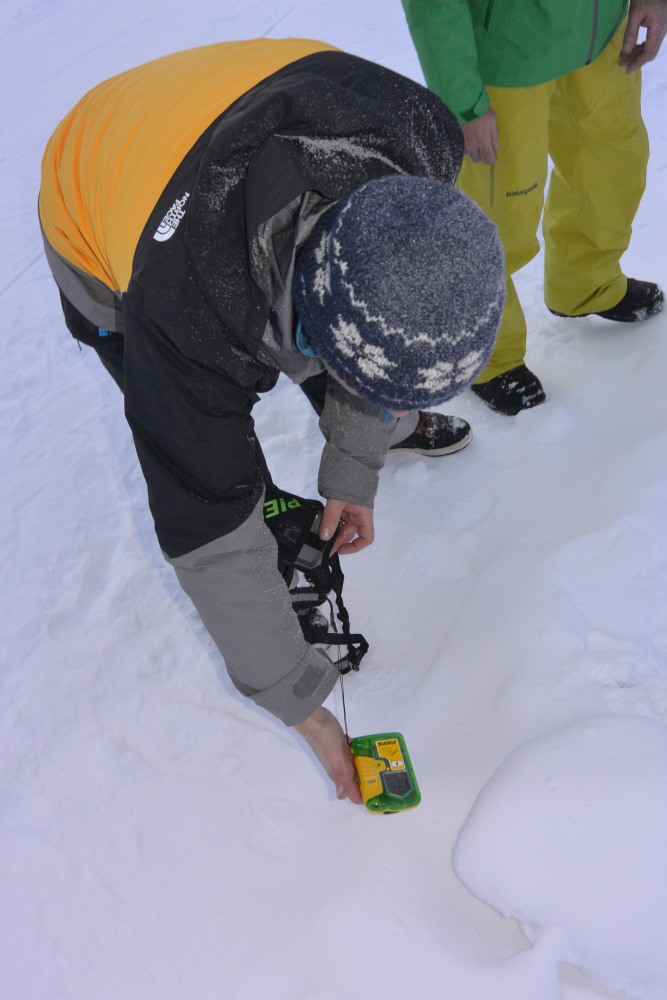 The DSP Sport was one of our favourite transceivers on test due to its speed, accuracy and ease of use. The range on the Sport was up there with more expensive transceivers (although about 8-10 metres off that of the Pieps DSP Pro) and it handled multiple burials well with a very simple mark flag button. The display was quick to sense and update changes in direction and the arrows were intuitive to read. The casing feels very robust and the massive switch on the side is a welcome change from using lots of fiddly switches on transceivers in the past. Our only real gripe with this transceiver was the battery life indicator which is displayed in thirds giving a potential in the lower third of anything between 20 and 120 hours of battery life – not really accurate enough for such an important device. Overall, though, none of the other transceivers could touch the DSP Sport on a price vs performance basis.

The pack holding all this gear is another Pieps product – the Freerider Light. Pieps claim that this pack is very balanced – I’m not entirely sure how that figures when loaded up but the fit against the back and around the waist is very cosseting thanks to the wide Velcro waist belt and ergonomically designed back panel which also provides decent back protection. The back protection isn’t a TUV approved removable piece like that of the Ortovox pack on test but Pieps do claim that it would absorb some force during falls on hard surfaces. The front pocket holds all your avy gear and also has a handy, but small, 100% waterproof compartment. There’s a helmet pouch on the front as well as a microfleece goggle pocket on the top and a fairly cavernous rear stowage compartment. The ski and snowboard carry system gives you the option of classic “A” or diagonal layouts. When hiking with skis everything feels stable and secure. A good mid-range pack.

A considerable step up from the budget and mid-range packs but the quality of the gear is immediately apparent. 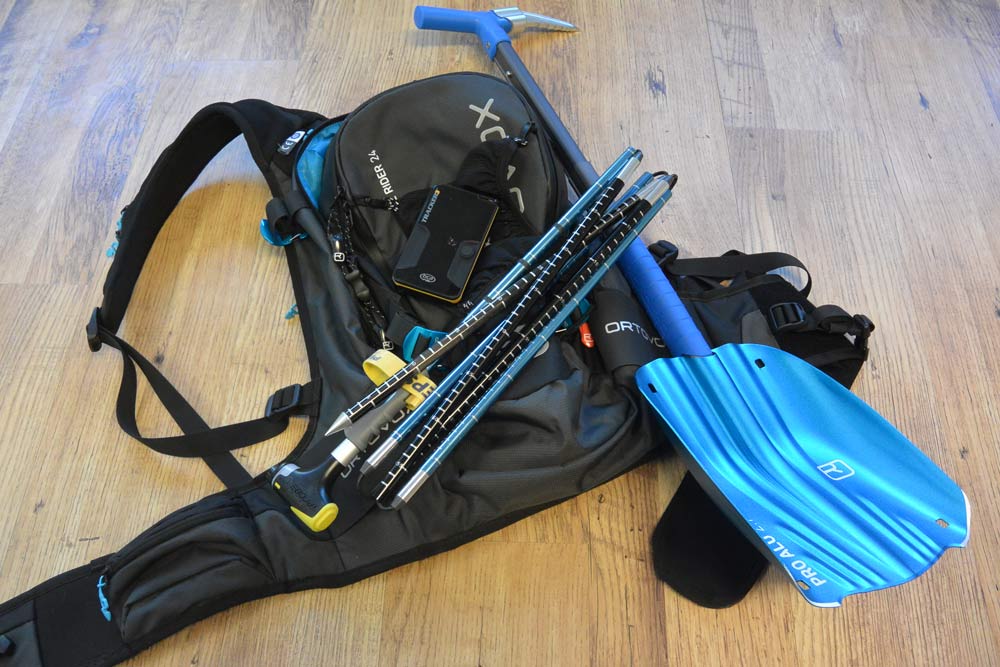 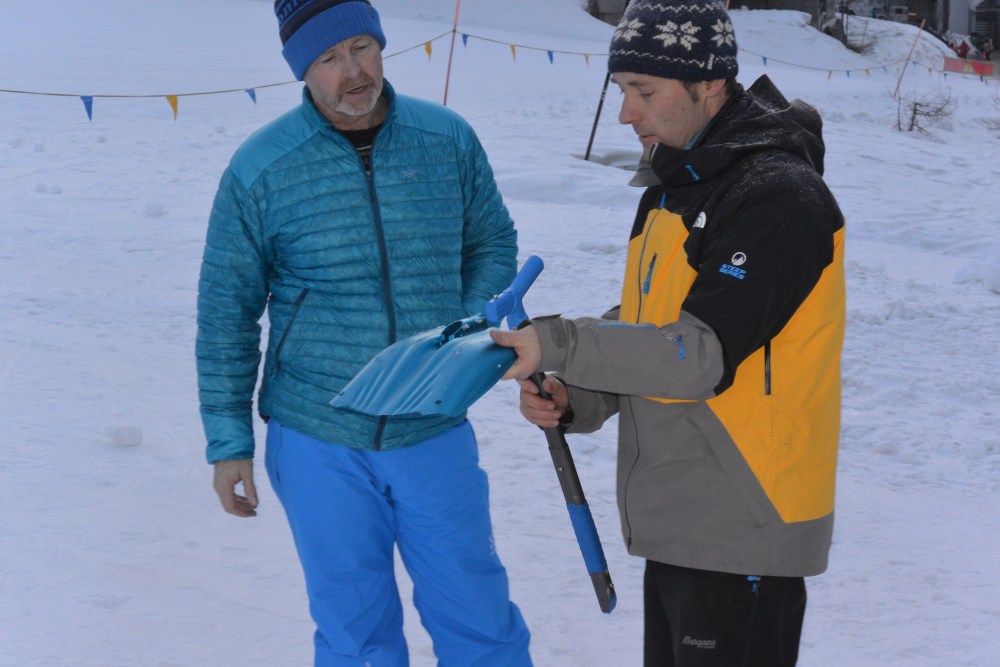 The Ortovox Pro Alu shovel is one of the best that has ever graced our hands and the optional snow spike (which actually comes bundled with the shovel from most retailers) is a great feature for more serious back country riders. Build quality is excellent with all the connections feeling nice and firm rather than loose and rickety. The blade cuts cleanly into the snow thanks to its serrated edge. The top hand grip can be inserted to suit both right and left handers and there’s also a rubber coated ‘grip zone’ towards the base of the shaft. The blade can be inserted at 90 degrees to the shaft for a more aggressive clearing style. In use we found this shovel to be the best of the offerings due to its robustness, versatility and pure snow-shovelling capabilities.

The Pieps iProbe One is an interesting concept that Pieps claim reduces search times by up to 60%. The probe tip has an integrated receiver for pinpoint location of the burial victim. In multiple burial situations it will deactivate the buried victim’s compatible Pieps transceiver once the tip is within 50cm of their transceiver. This allows other rescuers to continue their search without having the potential confusion of multiple signals. There is a weight sacrifice of around 100g against other similar probes, but in reality this is fairly unnoticeable once it’s in your pack and on your back.

The concept of having a receiver in your probe tip is a sound one and the multiple burial functionality is a nice addition but it’s worth reiterating that this only works if the burial victims have compatible Pieps transceivers.

The BCA DTS Tracker 3 performed consistently well in terms of range, speed and accuracy in our burial tests.

At 215g, it’s 20% lighter and smaller than the Tracker 2 and is the thinnest multi-antenna digital transceiver around.

Highlights include a ‘Big Picture’ mode, giving an overview of victims within the search area; a ‘signal suppression mode’ which allows you to suppress the signal of the first victim once found and automatically lock onto next closest victim. It’s also user-upgradeable via the USB port in the battery compartment.

The display can be a little confusing at times as it flashes on and off in search mode rather than simply staying on but the direction indicators were straightforward to follow and the processor was very quick to update any changes in direction sensed by the 3 antennas.

The BCA Tracker3 could easily be used by beginners but more advanced users will get the most out of it.

The Ortovox pack that holds all this gear is the Freerider 24. The Freerider is a premium pack with a built in (but removable) spine protection system which is TÜV-tested and fulfils the strict motorcycle standard. The spine protector can be removed and worn under your top using the strap provided in the event that you’re not taking your pack out.

The Freerider 24 has an excellent, wide neoprene/velcro hip belt complete with handy compartment for storing smaller items. The array of compartments in this bag is both a positive and a negative aspect to the bags practicality. On the plus side, you have somewhere to store everything you could possibly want to take with you into the backcountry. On the other hand, getting stuff in and out becomes rather tedious when you open zip after zip looking for that elusive pair of sunglasses.

The avalanche gear storage compartment holds all the necessary items. It’s the second-in of four compartments which might have made it a little time-consuming to find in an emergency were it not for the red zip pulls exclusive to this compartment.

Overall, everything about this pack sings of quality and durability and when you slip it on your back it just feels ‘right’ but it’s a good idea to keep reminding yourself that the avy gear is in the compartment with the red zips as you head off into the backcountry.