7 of the Scariest Black Runs in the World

Whether you’re looking for a new challenge, racking up as many double-diamonds as possible or wanting an excuse to add a little extra swagger to your après-ski at the end of the day (if you’re still walking by then), any of our top 7 scariest black runs will fit the bill.

Gracing the bucket lists of skiers all over the world, the Streif run at Kitzbühel is well renowned as a must-ski. It’s a racetrack on the World Cup tour, and draws the best of the best to compete every season for the bragging rights of being the Streif champion. Luckily for the rest of us, though, before and after the race, the track is open to the public as part of the Kitzbühel ski area.

With multiple paths down, any competent intermediate skier can tackle the 3,312-metre long run, but if you’re looking for the ultimate challenge, look out for the ‘extreme ski routes’, which are for expert skiers only. These contain notoriously tricky conditions and sections with a maximum gradient of 85% coming up to a jump. This run is definitely not for the faint-hearted.

Delirium Dive is one of those runs that attracts the craziest of the ski world to its snow. It’s known for getting serious amounts of powder, 3 or 4 times more than elsewhere in the resort, because of its placement on the mountain and how the wind blows the snow into the bowl. This one is risky, and our friends ‘across the pond’ keep a close eye on who takes it on.

When you reach the top of the Continental Divide chairlift, you’ll be greeted by a gate that can only be opened by an avalanche transceiver. You’ll also be under the watchful eyes of the Ski Patrol who’ll send you back down the mountain on a much more boring route if you don’t have a shovel, probe and a faithful skiing buddy. Safety first, eh? With frozen waterfalls, 45 degree chutes and loose rocks when you plunge over the blind lip and into the powder, you’ll be glad of all that Canadian preparedness! 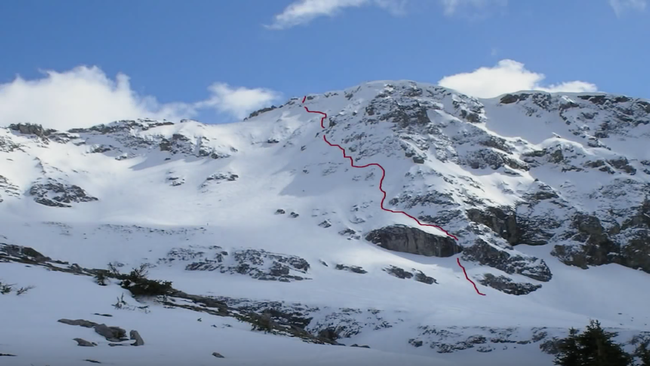 Not only is Alyeska the largest ski area in Alaska with 1,610 skiable acres and 76 official ski runs, this resort is also a mecca for off-piste and extreme double-diamond trails. One such stomach-turning run is Christmas Chute. The entrance to the extremely steep and narrow gully is found at the top of Chair 6, the highest point reachable without a helicopter or snowcat, and is one of the most challenging ways to access the North Face of Mount Alyeska.

For an even more technical challenge, try the adjacent, New Year’s Chute, which is even longer and just as intimidating. You’ll have to time this one right, though, as the conditions in New Year’s Chute are so extreme, that it is rarely open to the public.

Also known as the ‘Swiss Wall’, La Chavanette is a wide but hellishly steep slope right on the French-Swiss boarder in the Portes du Soleil ski region. Another slope that requires a leap of faith, the gradient at the top of the Wall is so severe that you can’t see the snow (or ice) beneath your skis until you’re over the edge.

This slope is extremely tricky in icy conditions, but there’s no respite in powder either. The constant carving at the mouth of the run creates monster moguls that take considerable skill to navigate. The run stays bumpy the entire way down, but at least the moguls start to decrease in size. You’ll be pleased to know that you get past the ones the size of golf carts pretty quick! 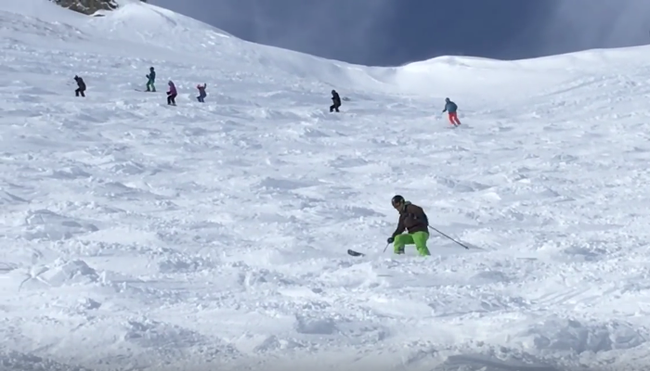 With its 78% gradient in some sections, the Harakiri, or Piste No. 34, is known as the steepest piste in Austria. The way down is such a rollercoaster that you can even buy a commemorative ‘I survived Harakiri’ t-shirt and, if you visit on a Friday afternoon, have a professional photographer capture you doing your thing. Or falling on your face. Either way, you’ll earn some respect for getting down this run.

It’s difficult to artificially keep snow on the piste because it likes to slide down the extremely steep gradient. It’s also only possible to groom Harakiri by winching in a custom, 9 ton piste-basher, so don’t expect corduroy on every visit. 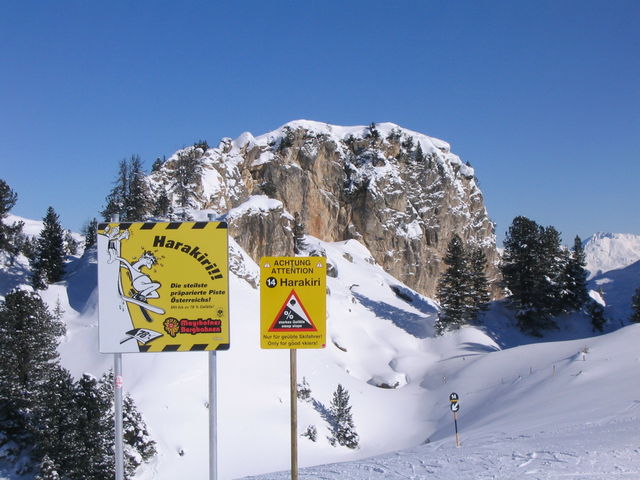 The terror of this run lies at the top. With no other way down that to throw yourself over the precipice and hope you’re edges are up to snuff when you hit the white stuff after the 10-20 foot drop. Oh, and if you chose the route with the least amount of time in free fall, you have to have to possess enough skill to avoid the rock face directly in your path.

Add to this the extra pressure of crowds pressed against the windows of the Jackson Hole Aerial Tram that passes right overhead hoping to see you fail, you’ll have to have nerves of steel to take this one on.

Officially, the piste is called La Sarenne, but is known by the locals as Champagne, because a glass or 6 of bubbly is exactly what you’ve earned if you make it straight down to the bottom without jelly-legs foiling your chances. As the longest black run in Europe at approximately 16km and with a vertical drop of over 2km, the Champagne is the perfect run to test your endurance. The aim of the game is to tackle the marathon-sized stretch without stopping, all the way down from the top of Pic Blanc at 3330 metres.

What earns this trail its place on out list though, is apart from the sheer length of the run, you can give yourself an extra challenge of navigating the daunting ‘Le Tunnel’ section on the way down. Known for being particularly nasty in icy conditions, Le Tunnel starts with an intense mogul field before you ski through the narrow tunnel itself.

Watch out when you emerge back into daylight, as you’ll find yourself on a tiny ledge that you’ll need to traverse in order to drop down into the next set of moguls. The slope gets steep really fast, and a fall could result in tumbling hundreds of metres down the mountain, so beware during busy times.