Skiing in Austria is hugely popular with British visitors. From the Mayrhofen piste map to the best ski schools, ski hire shops and après ski bars, here’s your guide to one of the most popular and lively ski resorts in Austria.

Based around a large yet attractive valley village in the scenic upper Ziller Valley (the Zillertal), Mayrhofen, Austria, has excellent amenities and a great après ski atmosphere, with two local ski areas that offer plenty to entertain skiers and snowboarders of all levels.

It's one of the biggest names in Austrian mountain tourism and is a longstanding favourite with Brits, drawing many repeat visitors who enjoy its great blend of authentic Austrian ambiance, good skiing, and very lively nightlife.

The village has managed to retain much of its traditional character while it's grown into a larger and livelier modern resort; most of the buildings are classically Tyrolean, whatever their size, so Mayrhofen fits with most people's idealised image of a picturesque Austrian mountain town.

As a well-established and sizeable community, it also has excellent amenities and facilities, and good transport communications with neighbouring resorts and other regional towns and cities.

Mayrhofen's extensive local slopes cover two separate ski areas, with direct access lifts based just 200m apart at the southern end of the resort's main street: the minor area is the Ahorn to the south, served by the impressive Ahornbahn cable car; the major area is the Penken to the west, served by the Penkenbahn gondola. A regular free ski bus service runs between the lift terminals and serves the central and outlying accommodation zones of the resort.

Mayrhofen's principal Penken ski area is accessed via a gondola based next the Ziller river, just off the resort's main street; access to the slopes is also possible via two further gondolas at the bus-linked neighbouring villages of Hippach and Finkenberg. 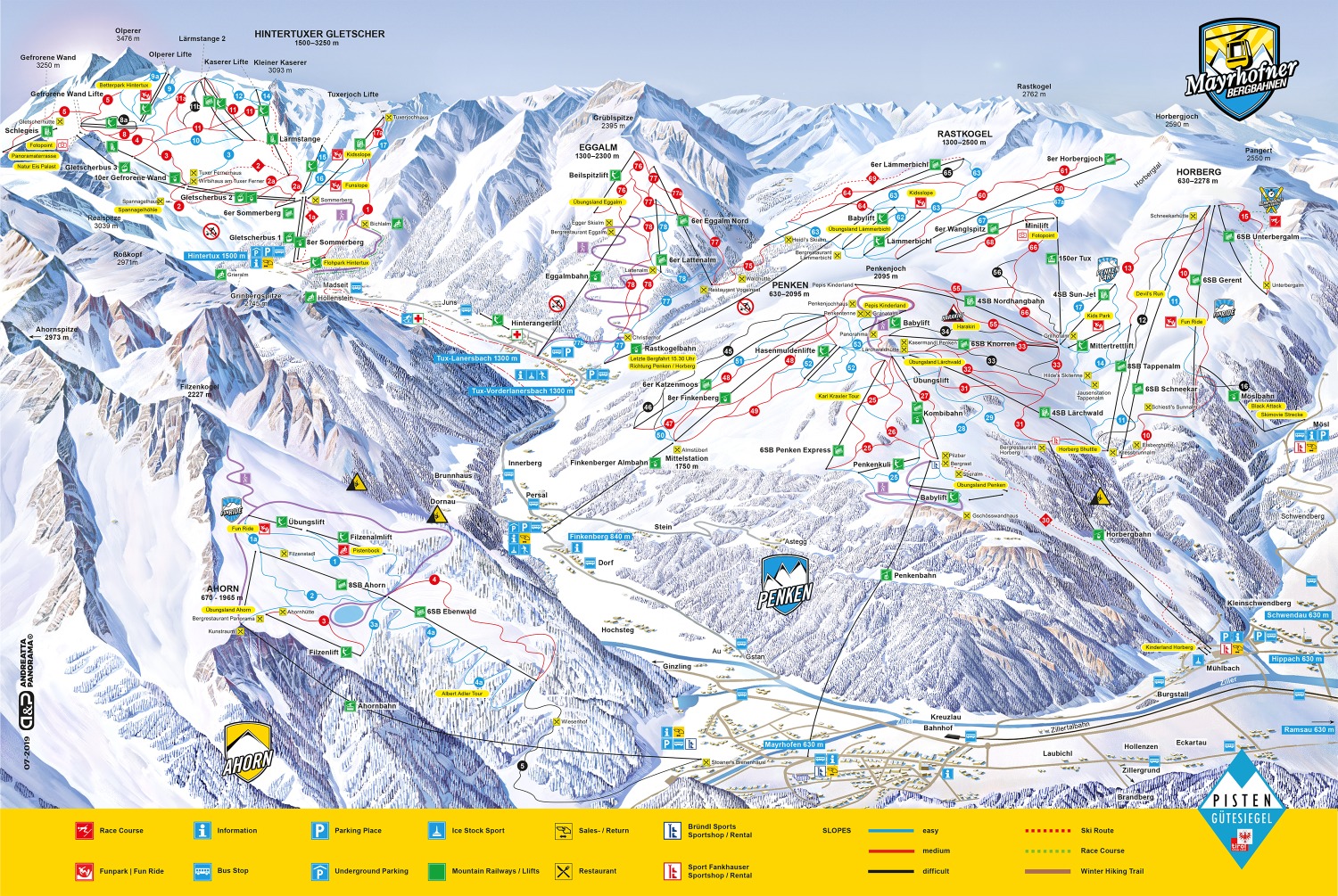 The Penken area covers the linked slopes of the Penken, Horberg, and Rastkogel mountain sectors, shared with the above-mentioned linked villages. It offers a a decent number of good, high-end blues and lots of testing reds, together with a handful of black runs including the infamous 78 percent gradient 'Harakiri' - billed as the steepest piste in Austria. The area's snowpark - the Vans Penken Park - is one of the best in Europe, attracting top pros from across the continent. Originally shaped by a legendary local crew, the Aësthetikers, it continues to improve season after season, and helps create the lively freeskiing and snowboard scene that characterises Mayrhofen.

The Penken area is also lift-linked with the slopes on the Eggalm above Lanersbach, extending the range of the skiable area and again mostly featuring steepish reds, including 1,000m of vertical on piste 77.

One major drawback is that there are no home-run pistes down to Mayrhofen, only un-pisted 'ski routes' to valley level at Finkenberg and Hippach when snow conditions are at their best; this lack of lower runs has an impact on lift queues, which are often long for downloading at the close of the day.

Mayrhofen's second ski area is on the opposite side of the valley, on the separate Ahorn mountain to the south. The Ahorn is great for novices: it is directly accessible from Mayrhofen via a large cable car; it features an extensive beginners area next to some perfect blue-grade progression pistes served by a fast 8-seater chairlift; and has a further couple of T-bar served blues and a short red for building skills. The sole attraction here for more experienced visitors is the 5.5km long red run all the way from the summit down to valley level.

Mayrhofen is also a member of the Zillertal Superski group of resorts, whose full area lift pass also covers three further ski areas in this region, including the year-round slopes on the Hintertux Glacier at the head of the valley.

Mayrhofen does not have the rep of, say, St Anton when it comes to backcountry, but after a big snowfall, the 300km of freeride terrain makes the area around Mayrhofen Hippach one of the largest in the entire Alps. As always, it's best explored an experienced local mountain guide who specialises in freeriding.

Some 80 percent of the descents can be lift-accessed, up to 3,250m, and a short hike will help you access the rest. Freeriders can enjoy up to 2,000m of descent in the remote valleys of Zillertal. Along with its world-class park, the terrain in Mayrhofen makes it a favourite with snowboarders - a lot of the classic off-piste runs here are snowboard-friendly, without annoying traverses or flat spots in or out. Novices wanting a good place to start will find a friendly off-piste drop off the blue run 29, but go with a guide - they'll show you the best stashes, whatever your level.

Mayrhofen village is spread out along the flat-bottomed valley floor, so it's an easy place to stroll around; there are some pleasant walks in the area, particularly along the banks of the Ziller river, and guided snowshoe treks up into the mountains are also available for those who want to strike out a bit higher into the surrounding scenery. Horse riding and horse-drawn sleigh/carriage rides are other more romantic ways of sightseeing.

Other active off-slope attractions include an ice rink; an indoor climbing/bouldering centre; a fitness studio; and a large aqua-leisure centre with indoor and outdoor pools, Jacuzzi, saunas, and steam room.

There's a good number of restaurants in the resort, many of them offering hearty Tyrolean fare but also a fair number of international favourites too, including Italian, Mexican, Chinese and Thai.

Après ski is one of Mayrhofen's big draws: the action starts a couple of hours before the slopes close, in the slope-side venues by the main upper lift terminals, and continues in the bars nearest to the base terminals as everyone starts to download to the town; the Pilzbar and the Elchbar are the prime spots at the top on the Penken side.

Down in the village there are numerous pubs, hotel lounge bars, and places with live music, plus a couple of larger nightclubs: some of the more upmarket lounge bars are perfect for a quiet drink, the vast majority of the other venues are busy and rocking from early evening until the early hours of the morning.

Seasonnaires tend to gravitate towards the Scotland Yard pub (inevitably known as "Scotty's") which is a great place to kick off any evening The Garage and Apropos are regularly the last bars to close.  Mayrhofen is also the home of the hugely successful Snowbombing music festival. There's no chance of your trip accidentally coinciding with it because it takes over town completely for an entire week, with artists as big as Fat Boy Slim, Kasabian, Dizzee Rascal and countless more playing in a variety of venues around town - including the gym. If you're really looking to go hard, book your ticket, just don't necessarily expect to be at your brightest and best for the skiing, as the best acts often don't finish til 6AM.

There are multiple outlets for ski hire in Mayrhofen, including Skiverleih Mietski, four branches of Brundl Sports and Ian Kilgour's Rent For Fun, to namecheck but a few.

There are many options for ski lessons in Mayrhofen, including big outfits such as Ski Pro's Mayrhofen Ski School, Ski School SMT and Mayrhofen 3000 Ski School.  For advanced skiers looking for tuition and guiding, check out Ski Experts.