From the Ellmau piste map to the best ski schools, ski hire shops and après ski bars in Ellmau, here’s the lowdown on a charming, family-friendly ski resort in Austria.

Ellmau is an attractive valley village tucked away at the north-eastern corner of the extensive SkiWelt domain, with stunning views north to the serrated ridges and peaks of the imposing Wilder Kaiser range.

It's particularly well-suited to beginners, but it's a very good choice for intermediate-level skiers and snowboarders too, and great for families. A peaceful resort with a good range of child-friendly facilities and an excellent beginners' zone right next to the village, Ellmau might not be on loads of Brits' radars, but it should be.

The local slopes are benign and are well interlinked with those of the neighbouring village of Going, providing a readily accessible progression route for novices making their first forays out on the mountain. The Hartkaiserbahn funicular is close by too, giving intermediates a quick link into the core SkiWelt system which lies to the south-west.

Ellmau has a good range of accommodation to suit most holiday budgets, from basic guesthouses and B&B pensions through to 3- to 5-star hotels, and a fair selection of local shops, cafés, bars and restaurants, plus good leisure facilities nearby. All of this serves to strengthen the case for Ellmau being arguably the best resort in the SkiWelt for beginners and for mixed-ability groups.

The SkiWelt is a superb area for intermediates, but beginners and novices can find the sheer scale of the area overwhelming and beyond their ability. Ellmau is an exception to this rule, however, because it features its own compact ski hill in the quietest corner of the domain, separated from the core circuit by an often bypassed valley-floor link. 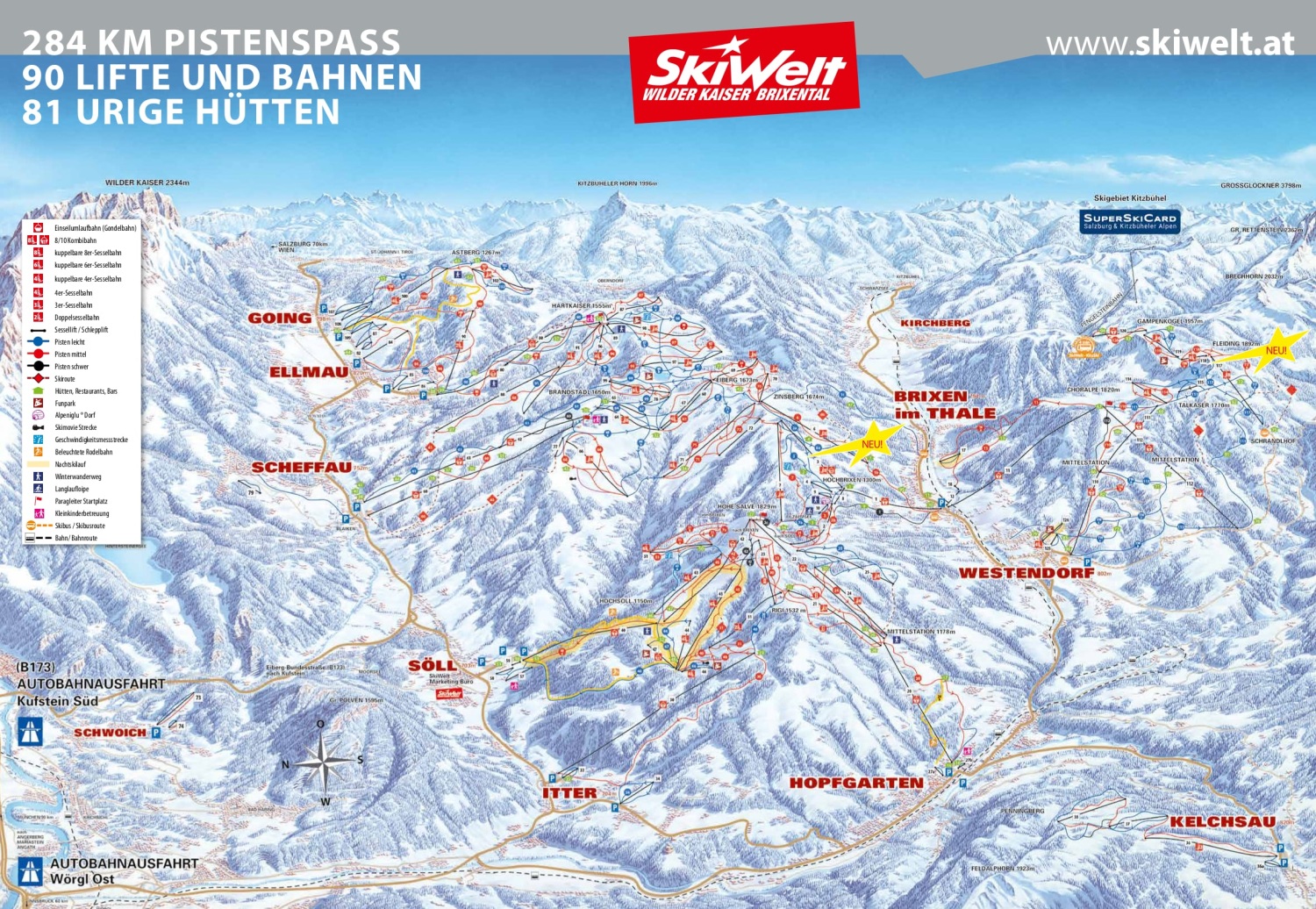 Ellmau's local ski area tops out at a modest 1,267m on the summit of the Astberg, shared with the neighbouring small resort of Going; the area's low altitude is compensated for by its north-facing orientation and by the extensive snowmaking infrastructure. Only periods of very mild temperatures can spoil the otherwise strong combination of features. The gentle lower slopes are served by a series of parallel ski-tows, facilitating easy stop-start traverses between the base areas of these two villages. The tree-lined upper slopes are reached by a chairlift, based midway between the villages, serving a couple of gentle blue runs and a few slightly steeper but shorter red runs.

More experienced visitors can access the main SkiWelt circuit by taking the Hartkaiserbahn funicular, whose base terminal is situated on the western edge of Ellmau village, and can return via a lovely long red cruise back down from the Hartkaiser summit.

The ‘White-Kögel’ is very popular with free-riders – an unprepared descent which runs down from the Köglbahn. But generally, off-piste skiers will find little to excite them around Ellmau, and the SkiWelt is a fairly low domain all round - topping out at around 2,000m, so great powder can be scarce.

The best off-piste in the area is to be found around Söll where the 'Black Pipe': a ski route from the Hohe Salve to Hochsöll with more than 80 percent incline, offers some thrills. Alternatively, Kitzbühel, with its dedicated freeride zones, is just half an hour's drive away.

The Kaiserbad leisure centre in the hamlet of Wimm, just a 15-minute walk or a short bus ride away from Ellmau, has indoor tennis courts, squash courts, and climbing walls, and its 'Aquarena' wet zone features indoor and outdoor heated pools, flumes & water-slides, bubble-jet tubs, steam rooms and saunas.

Après ski is typically Austrian, with animated afternoon drinking sessions to a soundtrack of loud cheesy Europop in a couple of buzzing bars for an hour or two after the lifts close, The Ellmauer Alm and Pub 66 are well-established favourites. But Ellmau's nightlife is generally low-key and focused around the village's handful of cosier traditional stubl-style local bars.

There are multiple outlets for ski hire in Ellmau, including Sport 2000 Fuchs, Intersport Winkler and Ski Paradies Skiverleih.