Every winter a third of Brit skiers fly, drive or take the train across the channel for their annual French ski holiday – we’re easily France’s best tourists! And despite our grumbles about French prices and French service, we adore the French Alps – from the traditional villages to the purpose-built high-mountain resorts. Here we pick ten of the best...

France has everything – from family favourites such as Morzine and Megève to cult destinations like La Grave and Chamonix; from hidden gems such as La Clusaz and St Lary, to high altitude, snowsure paradises like Val Thorens and Val d’Isere. And you can be sure that we Brits will be the ones dancing on the tables of Meribel when it’s après-ski o’clock.

Chamonix is one of the most iconic names in big-mountain skiing and is rightly revered for its epic descents and off-piste terrain. Every skier should come here at least once.

Chamonix isn’t your average ski resort. This historic valley town at the foot of Mont Blanc, is synonymous with huge vertical descents and extreme off-piste. However, you don’t have to be an expert to enjoy Chamonix, as there are other more conventional ski areas in the valley, five in total, mostly spread some distance from the town, but served by bus and/or train links, which can get very crowded! 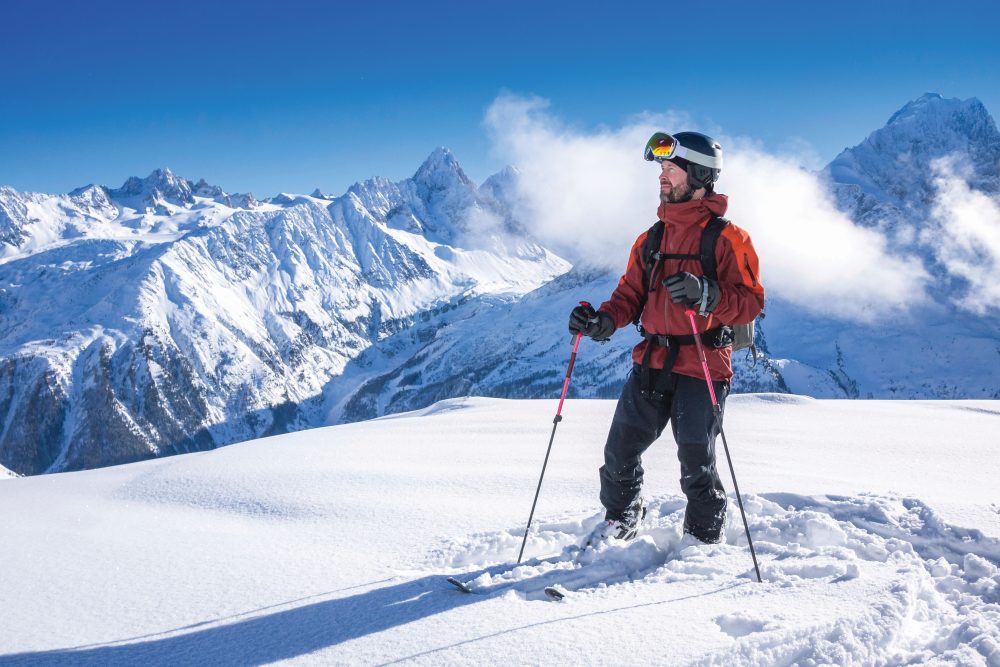 Chamonix’s most famous off-piste terrain is the must-ski Vallée Blanche descent, accessed from the Aiguille du Midi which is reached on the world’s highest vertical-ascent cable car. The ski routes off the summit are accessed via a catwalk along an exposed arête, are totally off-piste, and you shouldn’t attempt them without a guide.

The Grands Montets ski area at Argentiere, 8km up the valley from Chamonix, is the other main freeride playground. Beyond there, at Le Tour, is the La Balme ski area, which offers the best slopes for novices and intermediates.

We also recommend the wooded slopes of nearby Les Houches for days when visibility is poor higher up the mountain.

‘Val’ is the better-looking half of the huge Espace Killy ski area. Superb for experts and mile-hungry intermediates. Loved by us Brits! 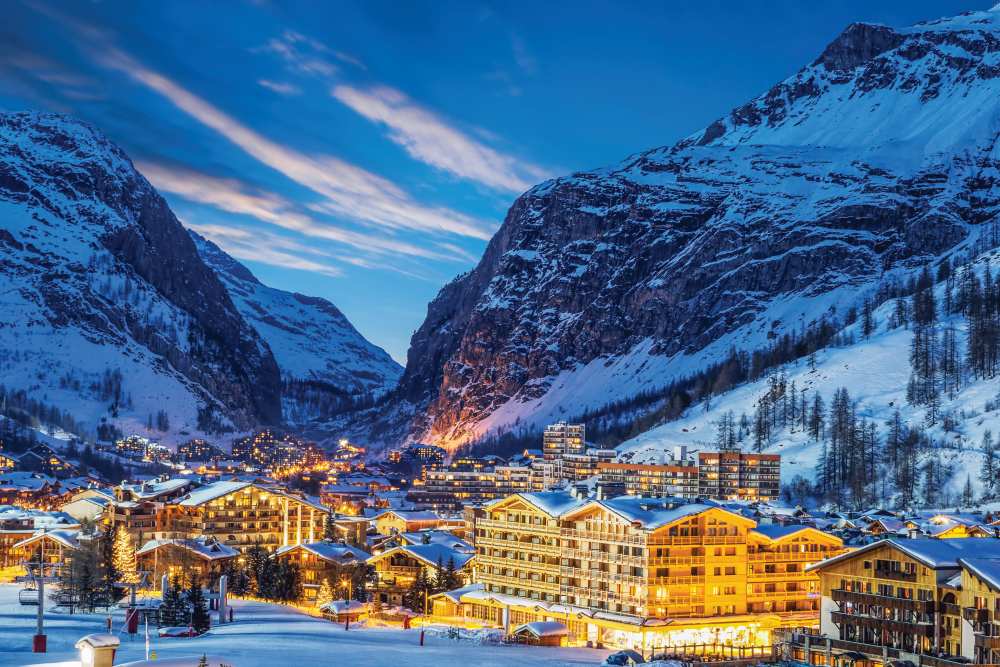 Undeniably world-class; Val d’Isere is a blast for strong skiers and boarders but it has plenty for lesser mortals. The resort’s lively upmarket après-ski, boutiques, top-class hotels and deluxe chalets make a holiday here pricey, but less bankrolled visitors can still find value for their money.

The quantity and quality of lift-accessible off-piste terrain is one of Val d’Isère’s prime attractions, offering high-altitude glacial zones, super-steep couloirs, and powder-filled bowls. The three sectors that form Val d’Isère’s pisted ski area also have their own distinct characteristics. The Pissaillas Glacier/Le Fornet sector, at the highest and easternmost edge of the domain, has the quietest and most snow-sure slopes. The central Solaise sector has motorway blue and red pistes, while the Bellevarde sector is draped over an expansive snowbowl above Val d’Isere and La Daille, and hosts the resort’s iconic La Face black run.

Avoriaz is a true ski-in/ski-out resort – and arguably one of the best-designed – perched atop steep cliffs high in the northern French Alps. 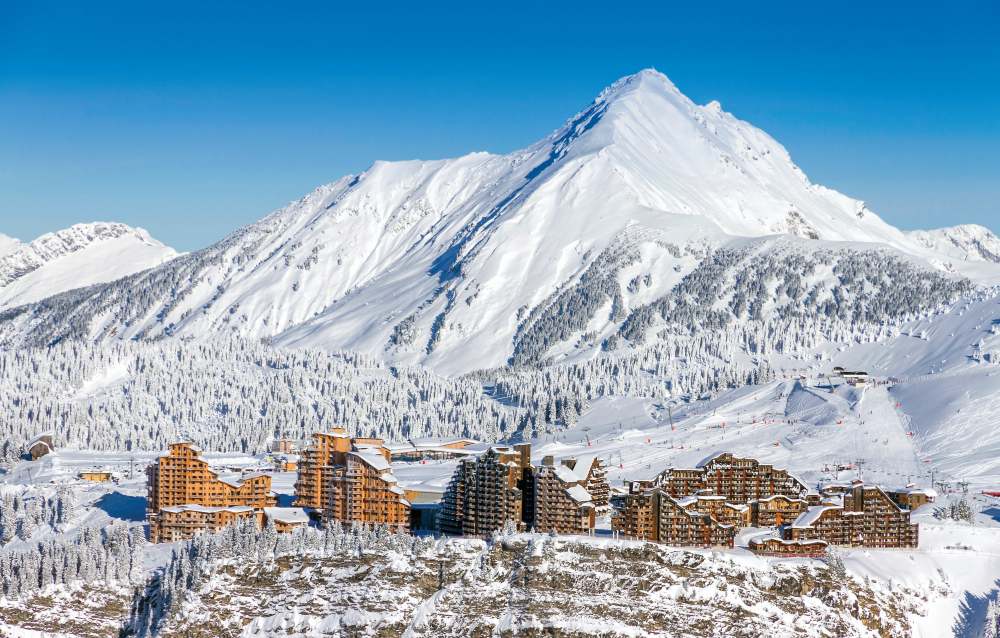 Founded in the mid 1960s, the resort elicits a love-it or hate-it response from visitors. Its massive angular apartment blocks may look austere, yet when viewed from a distance these cedarwood-clad buildings blend into the rocky bands of the cliffs and crags of the mountain.

Many visitors find that the slopes of the four local ‘Grand Avoriaz’ sectors are enough for a week’s holiday, because there’s a good mix of parks, powderfields, and pistes to suit all abilities, all lift-served directly from the village. But as the central resort in the vast Portes du Soleil ski domain, Avoriaz is also an ideal base from which to explore the linked resorts, perfect for keen intermediates and experts. A must-ski is the super-steep ‘Swiss Wall’ descent off the Chavanette ridge, and it’s well worth crossing over to Châtel, especially on a white-out day! We also love the pretty wooded runs down to Lindaret from the ridge above Avoriaz.

One of the Alpine big boys, sunny Alpe-d’Huez may not be a looker, but you’d be hard-pushed to find a resort that caters as well for every ability, from novice to black run fiend.

Blessed with vibrant blue skies, good visibility and snow-sure conditions for much of the winter, Alpe-d’Huez is a big ski domain that is ideal for beginners, yet challenging enough for everyone else. It’s made up of a large modern resort surrounded by five smaller, prettier villages all linked into the core ski area.

For great skiing, this is definitely one of our favourite resorts – and each of its five sectors has its own distinct character. 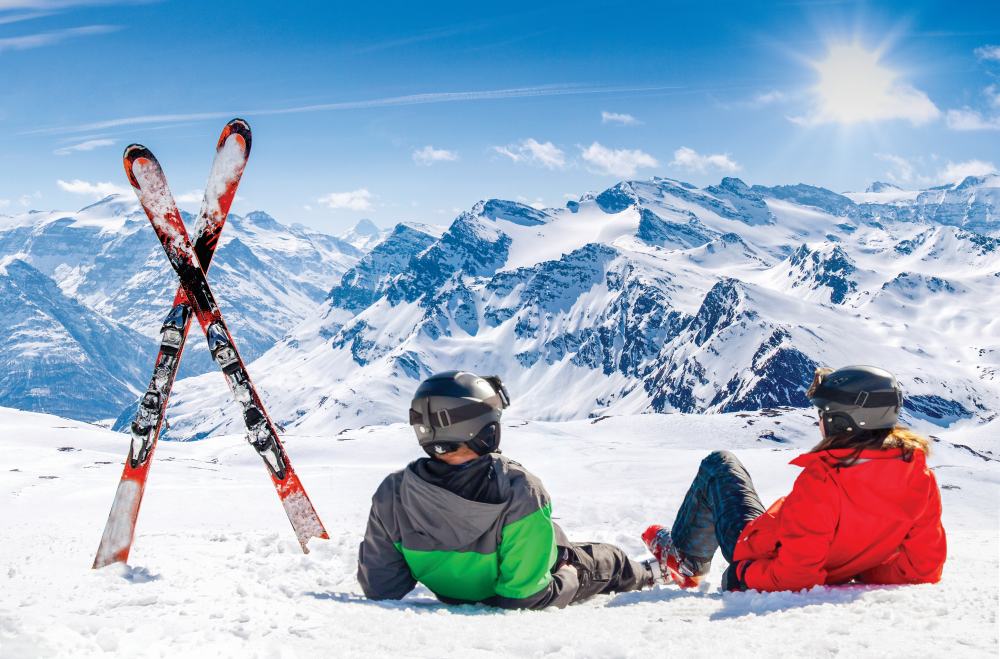 Once we’ve got our ski legs, we love to hop aboard the cable to the challenging glacial realm of the Pic Blanc to ski the epic 16  km summit-to-valley Sarenne run, billed as the world’s longest downhill black.

The core Alpe d’Huez sector is packed with mid-altitude cruisers that flow into the motorway-wide gentle superpistes that are designated as beginners’ zones. If this area gets a bit crowded, we recommend heading for one of the outlying areas.

For example, the Auris sector is a mini-resort in itself, with the full gamut of pistes for all abilities, while Signal, on a hill overlooking the town, has good cruising slopes and includes the resort’s floodlit night-skiing and competition pistes.

Our other favourite runs are the long sheltered trails on the home slopes of the Vaujany/Oz sector running down to the lowest-altitude valley villages.

This ultra-convenient big Alpine ski area is linked with Les Arcs to form the Paradiski, and is brilliant for families and mixed ability groups.

La Plagne’s collection of seven love ‘em or hate ‘em purpose-built high-altitude resort ‘villages’, plus four further outlying villages, is already one of France’s largest linked ski areas. Yet it’s only one half of the Paradiski domain. These two winter giants are linked by the astonishing double-decker Vanoise Express cable car, which spans the 380m-deep Ponturin Gorge.

La Plagne offers a variety of slopes from a glacial peak, through wide open bowls, to sheltered wooded pistes. The largest sectors are the huge bowls around the two biggest bases, Plagne-Centre and Belle-Plagne; slopes here range from motorway blues and fast reds to more testing narrow routes. 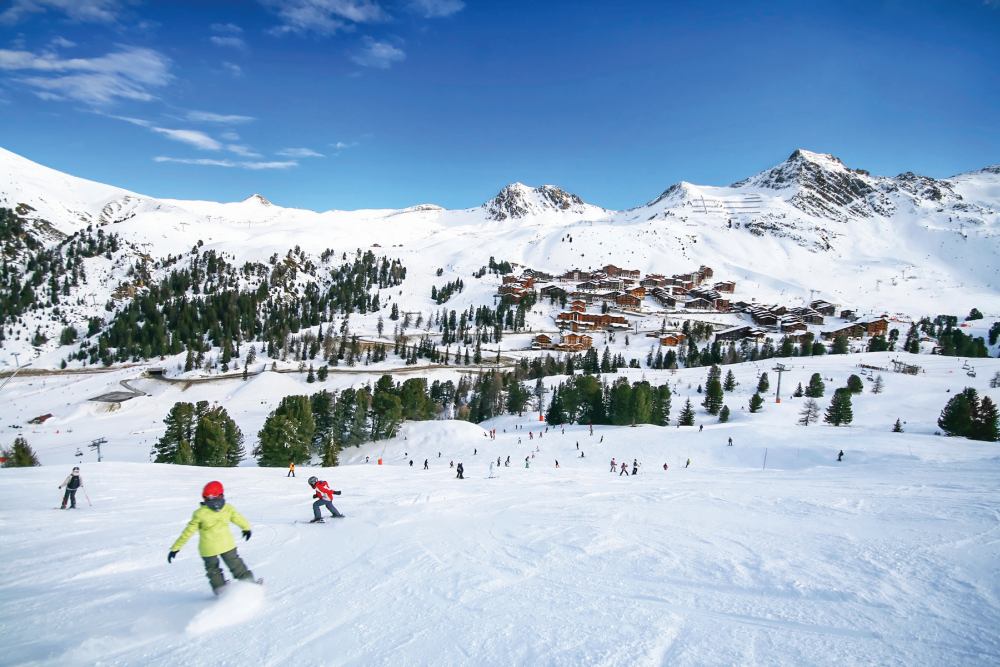 The most challenging runs are to be found in the Le Biolley sector. Off-piste opportunities abound: the routes off the back of Bellecôte feel a long way from civilisation.

Originally founded by British wintersports fan Peter Lindsey back in the 1930s, Méribel is still ‘the one the Brits love’ – as much for its lively, Anglocentric social scene as for the fact that, rarely for a purpose-built resort, it has maintained a dogged insistence on traditional chalet-style architecture. 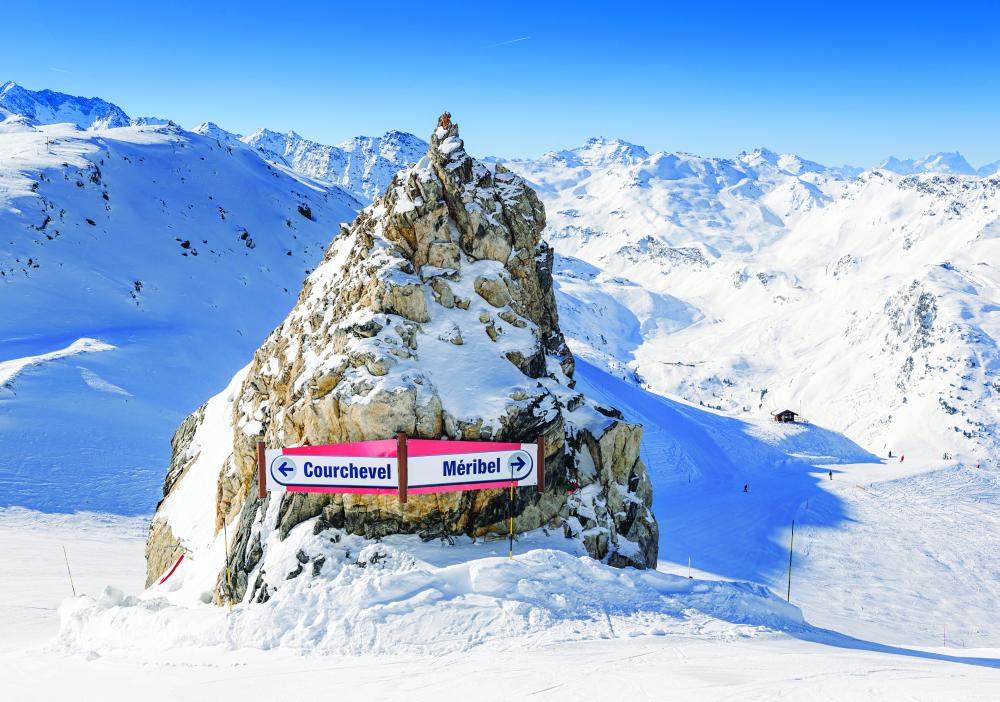 As the middle valley of the three, Méribel is paradise for mile-munching intermediates and the best base for exploring the other valleys. And the trick to skiing Méribel is to follow the sun around the valley and avoid the homecoming ice or slush.

From mid-afternoon onwards, the volume rises and the party starts. The Folie Douce and the Rond Point, perched on the eastern slopes just above town, are the liveliest piste-side venues, whilst The Pub and Jack’s are two of the leading lights down in the village itself. Dick’s Tea Bar is a Méribel legend.

La Clusaz is a picture-postcard pretty Haute-Savoyard village in the heart of the wonderfully scenic Massif des Aravis, less than an hour’s drive from Geneva. 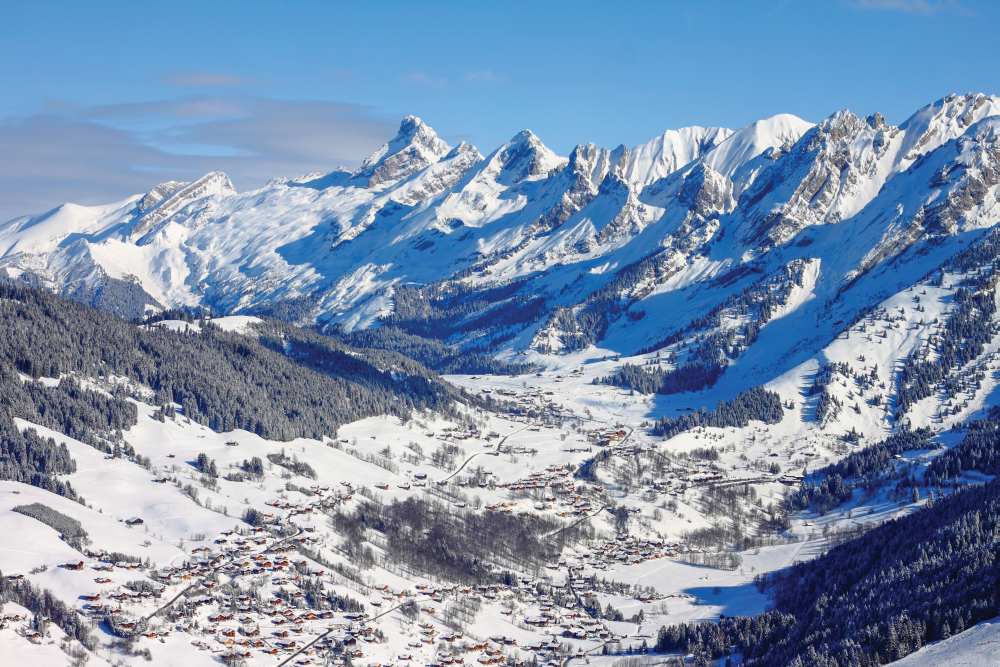 The ski area is linked by free bus to equally charming Grand Bornand and amounts to over 200km of varied terrain, mainly suiting intermediates but with plenty of scope for experts too. The highest Balme sector has good reds plus a couple of steep blacks. It usually has the best snow conditions too. The Balme massif is a magnet for freeriders.

Off the slopes, the après ski is low-key. There are a few livelier bars, though such as the Pressoir, Salto and Club 18.

If you want a cheaper, family-friendly Gallic alternative to the Alps, the French Pyrenees are your peaks. St Lary Soulan is our favourite – it has one of the largest ski areas in the region, attached to an attractive village. It’s also famous for its thermal baths. 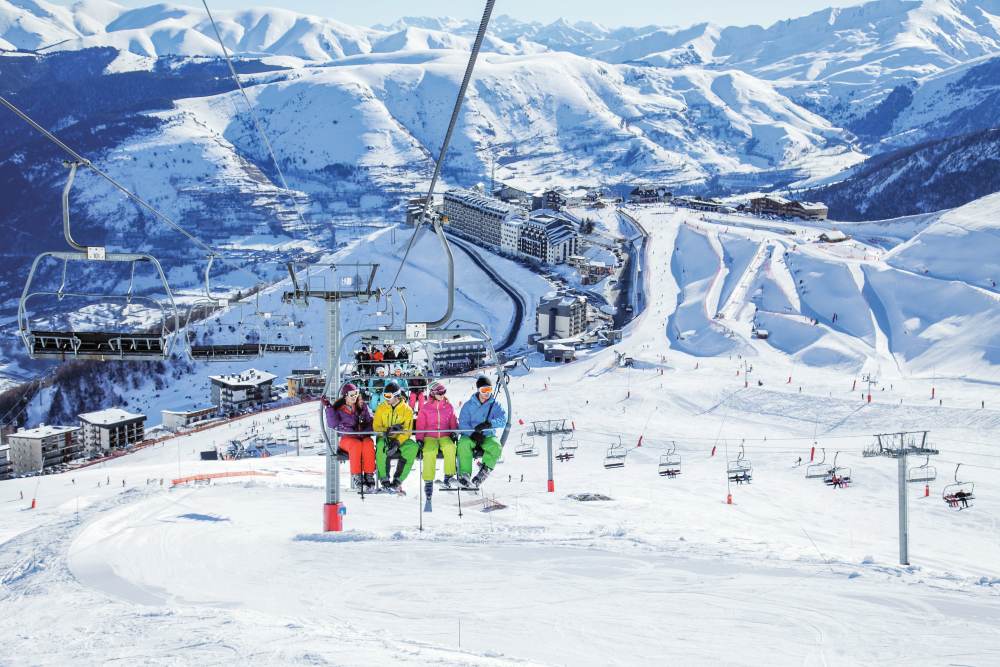 The skiing is over three areas: 1700 is for families and beginners. You’ll find longer and tougher runs at 1900, including the Mirabelle, which, at 3.6km, is one of the longest runs in the Pyrenees. The highest skiing is at 2400 where freestylers will also love the mogul and slalom stadiums, a snowpark and a halfpipe.

For your après, head to the bars around the base of the cable car, including the Bar du Telepherique and nearby Carre Blanc.

La Grave is no ordinary ski resort. In fact, it’s not a ski resort at all, it’s a serious mountain station that just happens to facilitate snowsports. There are no avalanche protection systems, no slope signs and no boundary ropes. In fact, other than a couple of routes on the Glacier de la Girose on the summit sector, there are no pistes; the entire area is off-piste and is only suitable for advanced skiers and riders. 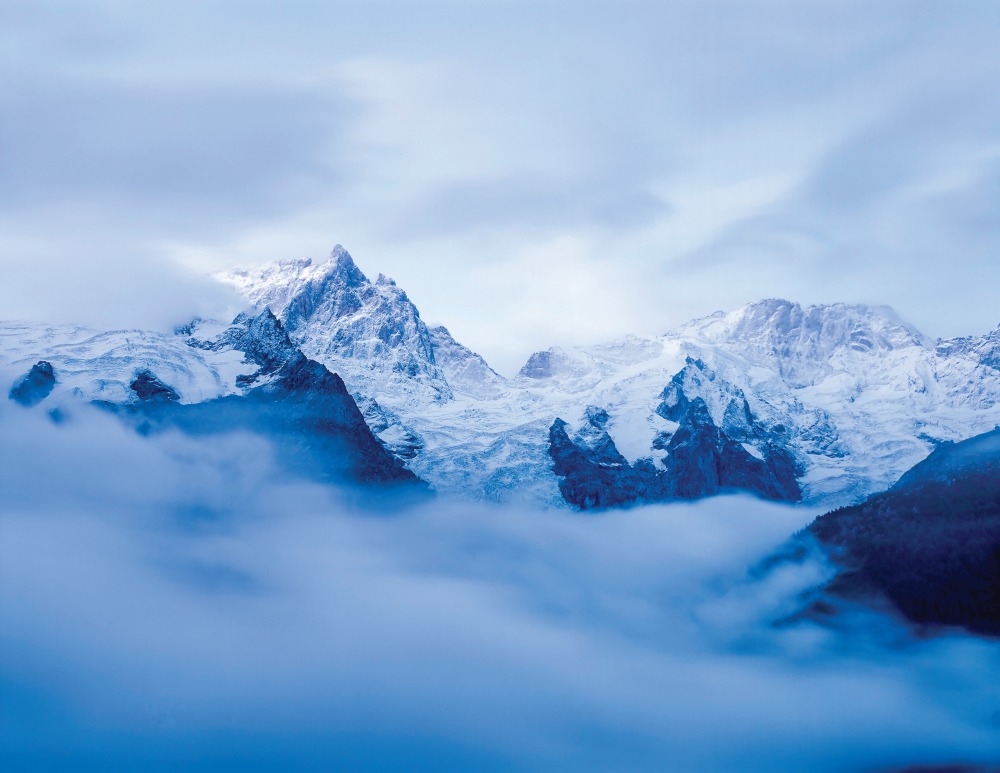 There are two classic descents: the Vallons de la Meije and the Vallons de Chancel. Although access to both is straightforward, either via a two-stage gondola from La Grave or by crossing over from Les Deux Alpes, once you begin your descent here you have entered into a serious environment that has claimed many lives.

A beer or two on the terrace of the bar at the Hotel Castillan is the après-ski scene of choice. Later on, it’s more of the same over dinner, though more hedonistic visitors and seasonnaires party on at the K2 Bar and Pub Le Bois des Fees.

Serre Chevalier is the collective name for a string of villages and the extensive linked ski area that connects them. It’s best suited to keen intermediates, but works well for all abilities, and non-skiers too. 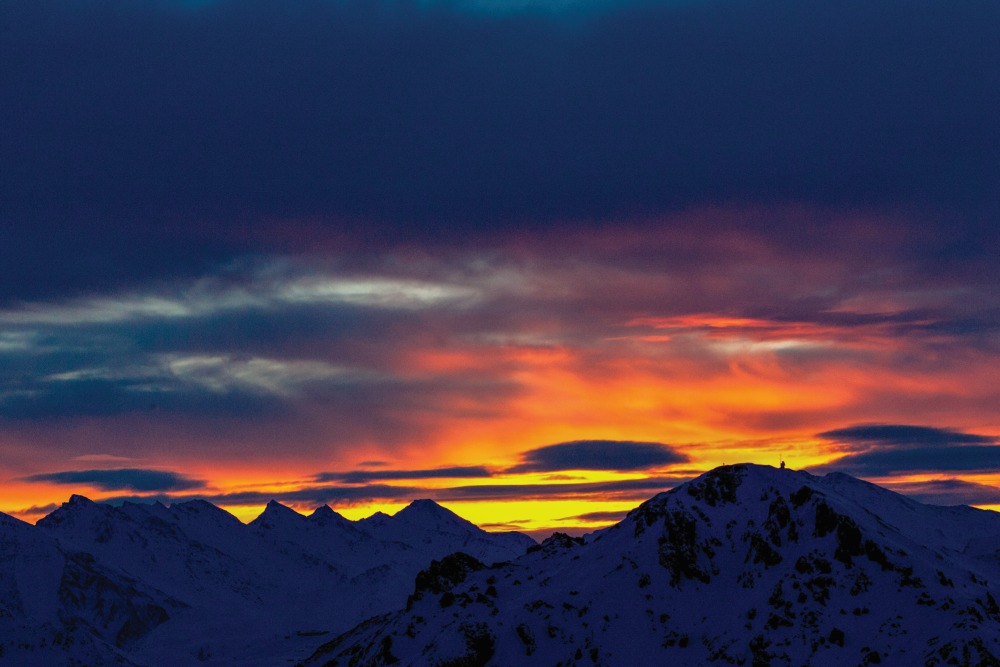 The ski area stretches across six peaks from the beautiful 17th century fortified town of Briancon to Monetier-les-Bains; the middle twin villages of Chantemerle and Villeneuve share the bulk of the core ski area. The top slopes are within open bowls, crisscrossed with intermediate runs, although most of the highest peaks are served only by ski tows.

Away from the slopes, Briancon is worth exploring. The quaint cobbled streets are filled with little shops, cafes, and restaurants. Monetier-les-Bains has a fabulous thermal spa complex – Les Grands Bainshes.

Independently researched and written by the Snow Magazine team, sponsored by the experts at Crystal Ski Holidays.