From the Saalbach piste map to the best ski schools, ski hire shops and après ski bars in Saalbach, here’s essential guide to this lively ringmaster in Austria's Ski Circus.

Saalbach ski resort is one of Austria's most popular and liveliest winter-sports holiday destinations, centred around an attractive old Tyrolean village and renowned for full-on après ski and rocking nightlife, with an extensive ski area, linked with the slopes of neighbouring Hinterglemm and Leogang.

With 270km of runs, the Saalbach Hinterglemm Leogang Fieberbrunn ski area fills and overspills the upper end of the Glemmer Valley (the Glemmtal) in the Zell am See district of Austria’s Salzburgerland.

The more manageable 'Ski Circus' sobriquet refers to the layout of the lift-linked ski area, which forms a circuit on the mountains around the two main resort villages; the well-planned network of slopes and ski lifts means that the circuit can be ridden either clockwise or anticlockwise, the latter being the easiest. While there are a few testing black runs, particularly above Hinterglemm, the vast majority of this excellent ski area is heaven for intermediates.

The charming central part of Saalbach is gathered around a handsome village square and a classic style onion-domed church, surrounded by an attractive blend of old and new buildings.

Delightfully peaceful during the morning, this cosy community changes character during the après ski hours and is filled with packed venues pulsating with a party atmosphere late into the night. Anyone who requires a full eight hours sleep every night would be best advised to book accommodation in the quieter suburbs which extend along the valley.

The ski area surrounding Saalbach is laced with well-groomed motorway blue and red pistes, a lot of them long and perfect for cruising yet with a high proportion of unrelenting high-end intermediate challenges too. A few of the runs on the lowest flanks of the valley cut through attractively wooded areas, but the majority of the slopes are open and above the tree line and the pistes are nicely inter-spaced with plenty of powder fields in the periods following fresh snowfalls; all sectors are well-served with lively mountain bars and good restaurants. 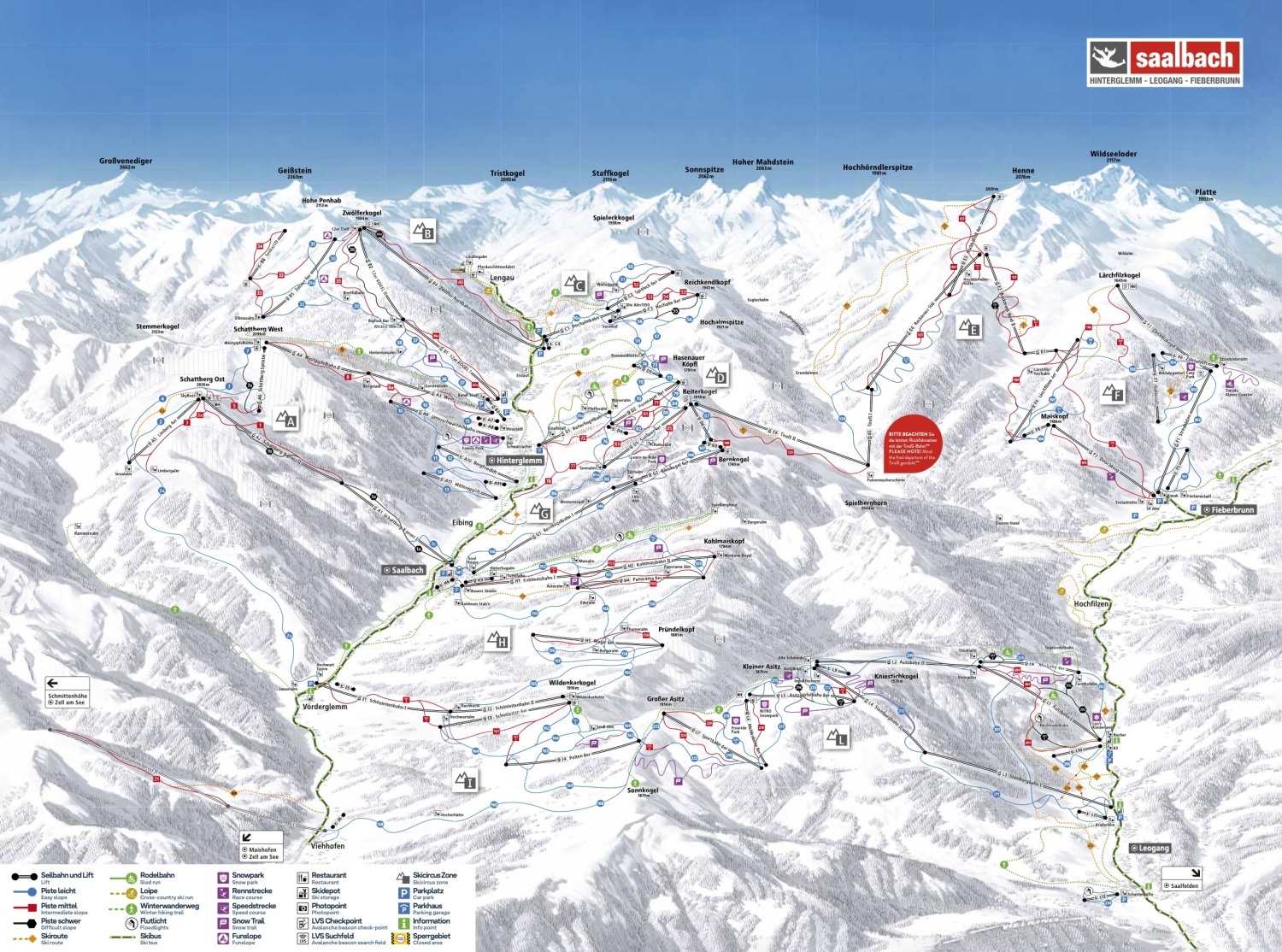 Saalbach's slopes are linked in a circuit (the 'Ski Circus') with those of nearby Hinterglemm, via the Bernkogel and Reiterkogel peaks above the northern side of the valley and the higher Schattberg peaks on the southern side; the links work well both clockwise and anticlockwise around the circuit, with just a couple of short strolls into lift terminals required at some points.

The clockwise route takes in the most challenging runs, but the anticlockwise route offers the greater mileage, thanks to a lovely long solitary blue run round the rear of the Schattberg Ost [East] and all the way down to the satellite valley station of Vorderglemm. From Vorderglemm, the two-stage Schonleiten gondola provides uplift to the summit of the Wildenkarkogel, from where this extension of the circuit then sweeps back towards Saalbach; there is however another spur from this sector that links to the slopes of Leogang in the neighbouring valley to the north, offering an enjoyable additional there-and-back excursion away from the busy core ski area.

A high percentage of Saalbach's slopes are covered by snowmaking cannons, but many of the south-facing and lower slopes do still suffer from periods of patchiness and are prone to be slushy in the afternoons.

The nearest snowpark is at Hinterglemm, on floodlit slopes next to the village.

The Ski Alpin lift pass covers all this plus the neighbouring Zell am See/Kaprun area, creating a truly mammoth ski domain. Are these areas lift-linked? Well, yes and no. A new one-way lift link, the ZellamseeXpress takes skiers from Saalbach to Zell am See, but the return trip back into the Ski Circus does involve a short bus ride.

The backcountry is one of the best things about Saalbach skiing - or, at least skiing in the wider Saalbach Hinterglemm Leogan Fieberbrunn area. There is plenty of sidecountry off-piste terrain between the runs, making it a great place for adventurous intermediates. For the best freeride skiing in Saalbach, however, head to the Fieberbrunn sector. With numerous off-piste possibilities combined with a breath-taking backdrop of the Kitzbüheler Alps, it's something of a backcountry paradise. No wonder the Freeride World Tour comes here.

The Skicircus Saalbach Hinterglemm Leogang Fieberbrunn also has its own Freeride Park, countless ski routes of varying grades of difficulty, info-points, LVS search fields & checkpoints powered by Ortovox, along with a specially tailored avalanche warning reports for the region. There are also dedicated freeride schools and camps. This is an area that takes its off-piste seriously!

Saalbach village is a pleasant place for a stroll and café hopping, but it doesn't really have the scale or a wide enough range of shops to be entertaining for more than an afternoon or two. The lovely lakeside resort of Zell am See isn’t far away though and offers much better opportunities for shopping and sightseeing. It's accessible by regular local busses from Saalbach.

Other daytime attractions away from the ski area in Saalbach itself are limited to scenic walks and the swimming pools and spa facilities of the leading hotels; all of the gondolas are accessible to walkers though, so non-skiers are also able to meet up with skiing companions at a number of high-altitude mountain bars and restaurants.

By mid-afternoon Saalbach turns into a hedonistic hive of après ski bars and 'tea dance' saloons packed with singing and dancing ski-booted revellers, many of whom already started partying earlier in any of the number of fun mountain bars scattered around the slopes. The Wildenkarkogel Hutte, Berger Hochalm, Backstattstall and Hinterhag Alm all feature DJs and/or live bands on their snow patios. Down in the village, the Bauer's Schi-Alm and the bar at Berger’s Sporthotel are the go-to hotspots.

The distinction between Saalbach's après ski happy hours and later nightlife is blurred and there are often groups of people still wearing their ski boots around town long after dark. There are a couple of proper nightclubs, the centrally located Castello being the largest, but many of the bars and pubs also have dance floors, including some hotel bars too.

There are multiple ski hire shops in Saalbach, including Miet Ski, Sport2000 and Hansis Skiverleih.

As well as the main Skischule Saalbach - Fürstauer GmbH, there are numerous other ski schools such as the highly-rated Snow Academy and the small but again well-regarded easySki Saalbach Skischule.  For advanced skiers, the Freeride SkiSchool Saalbach is the first dedicated solely to off-piste instruction.