From the Kitzbühel piste map to the best ski schools, ski hire shops and après ski bars in Kitzbühel, here’s your essential guide to one of the world's leading Alpine resorts.

Kitzbühel ski resort in Austria's Tyrol region is not only one of the world's most famous, it's also one of the most stylish, centred on a charming medieval quarter and filled with swanky boutiques, swish hotels, and sophisticated patrons.

The home of the historic Hahnenkamm downhill ski races, Kitzbühel also offers top-class amenities both on and off the slopes and some rocking après ski. You can also indulge in all manner of culinary delights, surrounded by stunning panoramic views at one of the 60 huts and mountain restaurants.

Kitzbühel caters for a broad demographic of guests and offers a wide choice of accommodation and services to match most pockets. Likewise, its ski areas are linked by a good system of lifts and have enough variety of terrain to please most skiers and snowboarders. Intermediates are particularly well served. 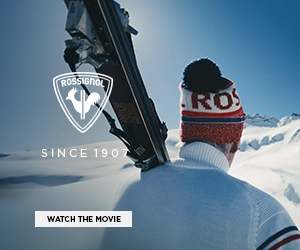 The resort's low base altitude is a concern in respect of the reliability of snow conditions, but snowmaking equipment covers the key problem areas on the lower to mid-altitude slopes. The lowest pistes are situated on grass-based slopes, which don't require much depth of snow to be viable.

Kitzbühel is most famous in the winter-sports world for being the venue for the spectacular Hahnenkamm race, first staged in 1931 and now a classic fixture on the annual Alpine World Cup competitions circuit. Race weekend in Kitzbühel is a world-class party.

Skiing in Kitzbühel is hugely varied. Because of the fame and reputation of its fearsome Streif course on the Hahnenkamm, Kitzbühel attracts many expert skiers. Its ski areas do contain a number of good black runs, plus several 'ski routes' - unpisted but way-marked descents away from the main pistes. But actually, the majority of the slopes are very well-suited to intermediates. 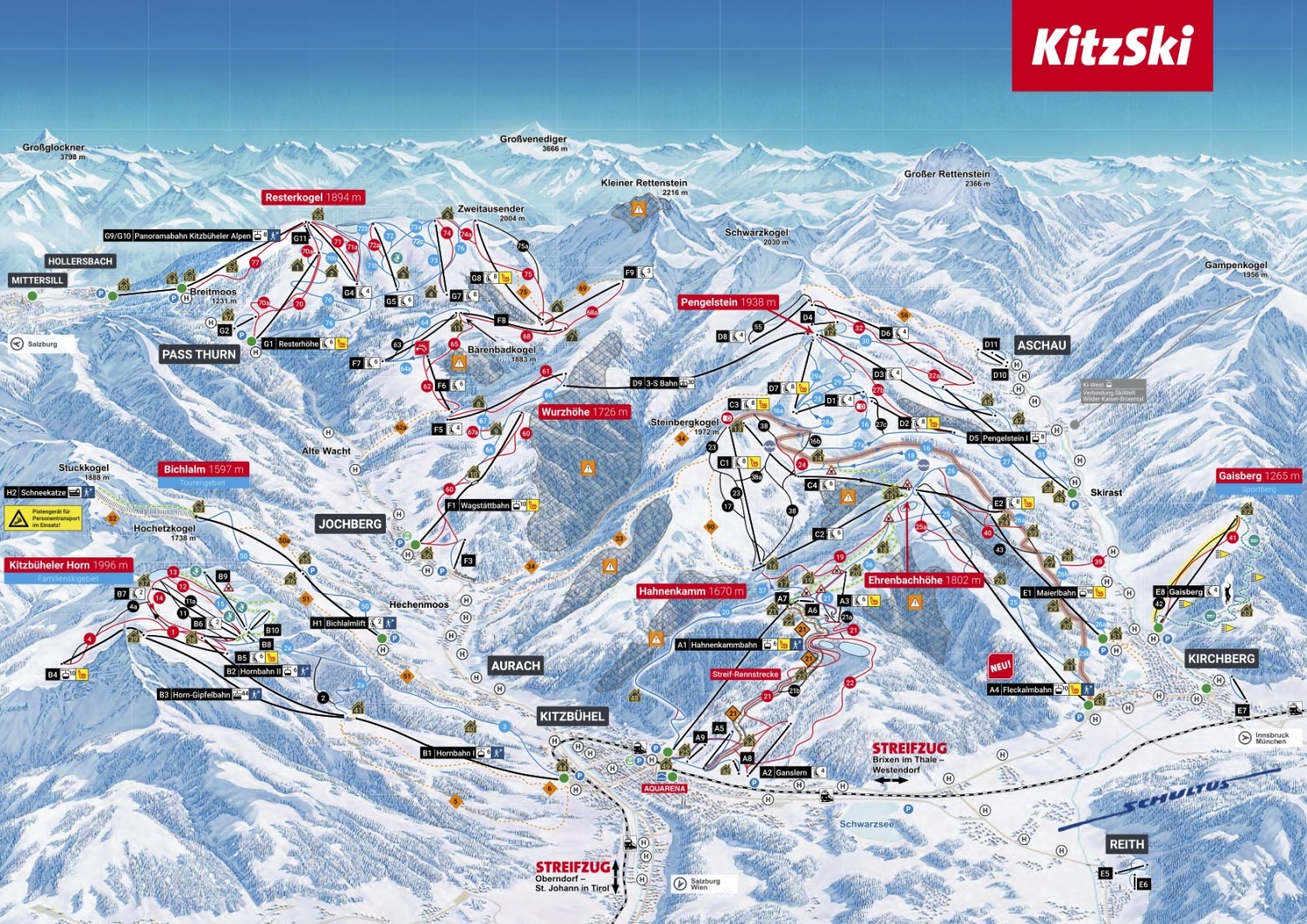 There are two separate local ski areas: the Kitzbüheler Horn to the north-east, and the main Hahnenkamm-Pengelstein-Resterhohe linked ski domain to the south-west.

The Kitzbüheler Horn area is by far the smaller, but offers a respectable selection of good cruising pistes on relatively high-altitude slopes, and is promoted as Kitzbühel's local freestyle & snowboard area: featuring a snow park, halfpipe, and skier/boardercross course.

Kitzbühel's main ski area is accessed via the Hahnenkamm gondola just up the street from the centre of town. The core Hahnenkamm-Pengelstein sectors are shared with the neighbouring linked resort of Kirchberg, and offer a nice mix of fair black runs, good reds, and far-ranging blues. The long blue cruises down to the hamlet of Skirast connect with a short ski-bus link for the Ki-West gondola on the slopes of the Gampenkogel, an access point into the vast SkiWelt domain via Westendorf (Kitzbuheler Alpen Top Ski area pass required).

In the opposite direction, the impressive peak-to-peak 3S gondola connects the Pengelstein to the Wurzhohe above Jochberg, providing the link with Kitzbühel's highest and most snow-sure sector - the Resterhohe above Pass Thurn. This Jochberg-Pass Thurn area houses some of the region's best intermediate terrain, plus a big snow park that features advanced-level modules. 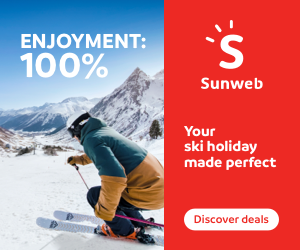 Kitzbühel's first freerider, Franz Reisch, skied down the Kitzbüheler Horn back in 1893, and the resort continues to attract lovers of deep powder descents. Away from the prepared pistes, Kitzbühel offers access to an expansive area of backcountry stretching out over 200 square kilometres - more than enough terrain to satisfy even the most dedicated of powder-hounds.

For ski tourers, the Bichlalm ski touring area is a slice of heaven. A chairlift runs up to the Bichlalm mountain hotel and restaurant but the peak itself can only be accessed on touring skis.

During winter, the Asten piste is open to ski tourers until 10pm every day, allowing you to tackle the Hahnenkamm in the evening too. Ski tourers can walk up the Asten Run (no. 20) on Kitzbühel’s local mountain every evening. At this time, the snow groomers are normally already working hard to prepare the slopes for the next day, but they are used to keeping an eye out for ski tourers. This gives tourers a unique opportunity for risk-free ski touring close to the town centre.

Kitzbühel  old town is a real charmer and the resort is truly blessed when it comes to après - it has a host of bars catering for every taste from a quiet beer to a full-on party. Kick off at the Streifalm at the bottom of the slopes. When you've drunk enough to work up an appetite, dive into one of the vast range of restaurants which cover the full spectrum from fine dining (with the Neuwirt at the top of the tree) to cheap and cheerful.
There's plenty to do once the slopes shut: the Aquarena pools will keep families happy and you can try curling, tobogganing, even watch some snow polo. Good rail links mean a day trip to Salzburg or Innsbruck might appeal to the culture-seekers or non-skiers.

There are multiple outlets ski hire in Kitzbühel , including Schiladl, Sport 2000, Etz, Element 3, Ski Rent Michael, as well as branches of Intersport.