From the Innsbruck piste map to the best ski schools, ski hire shops and après ski bars, here’s essential guide to a city resort that's more than just a gateway to skiing in Austria.

Innsbruck's location, nestled into a narrow valley right beneath rugged mountain peaks, together with its old town, historic churches and buildings, interesting monuments, rich museums and galleries, and active commerce, all combine into an interesting sports-plus-culture attraction. It all makes an excellent destination for those who seek a broader European experience than simply skiing, or for families where some members are less assiduous skiers.

In addition, the city has one of Europe's liveliest freeskiing and snowboard scenes, with many brands and pro-riders choosing to base themselves here. Its the original home of the Air & Style, the best-attended live snowboard event outside of the Olympics, and the surrounding mountains are home to some of Europe's best snowparks.

With its airport and train station, this beautiful city, twice an Olympic host venue and capital of the Tyrol, is frequently the entry and exit point for skiers fanning out to other ski resorts in Austria and northern Italy. On top of the excellent guest facilities you get a remarkably generous ski lift pass structure taking in local and famous ski centres nearby and year-round skiing on the Stubai glacier, all with hotel pick up by bus.

OK, so this is not ski-in, ski-out. But it rewards energetic skiers who are prepared to travel . In all, nine ski resorts around the city make up the Olympia SkiWorld Innsbruck, including the freeride paradise Axamer Lizum, the family-friendly Rangger Köpfl, the freestyle favourite Nordkette and the 3,210m Stubai Glacier. The areas are scattered at distances varying from 15 to 45 minutes travel time from the city centre. 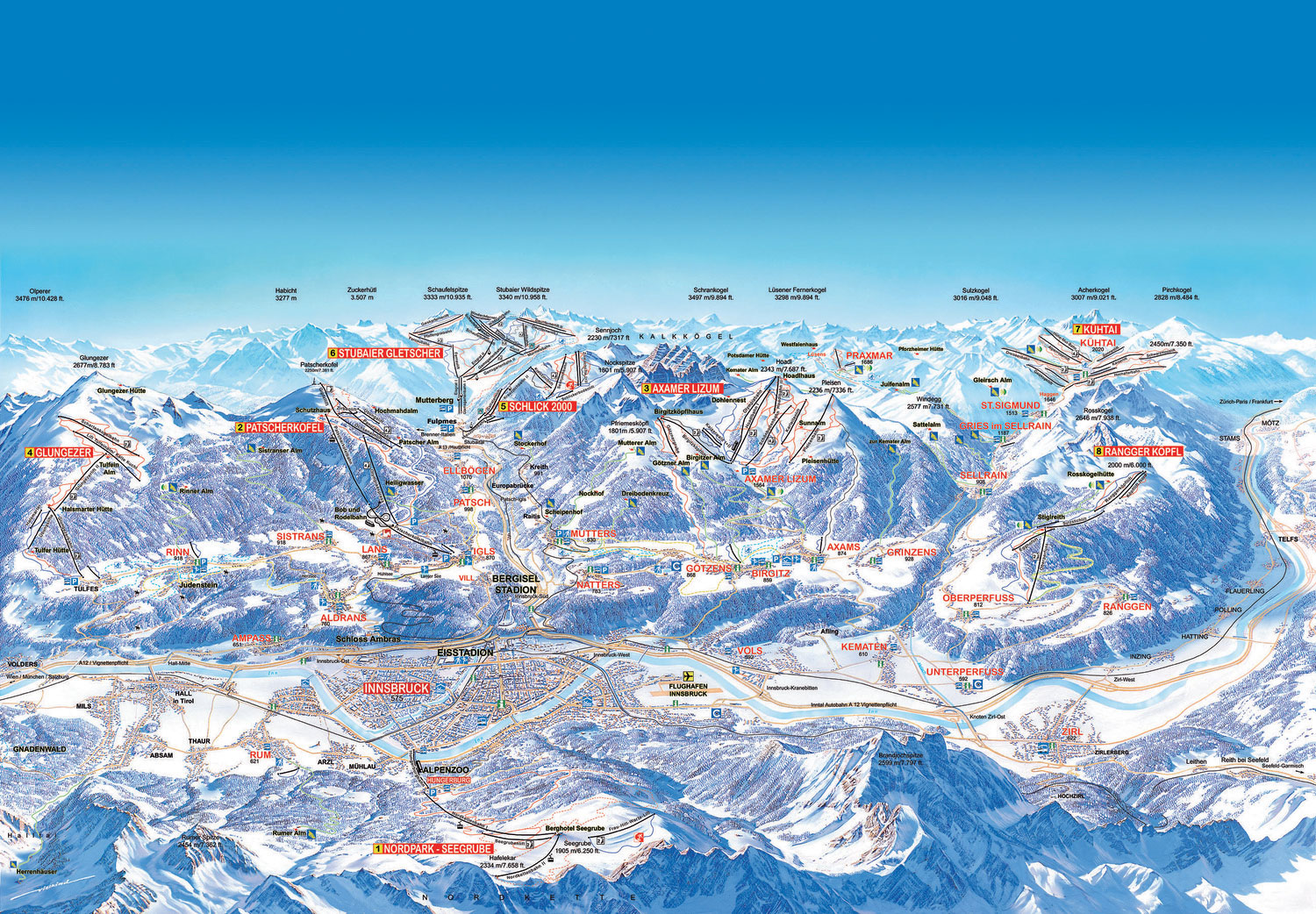 Innsbruck has been unfairly branded a wimpy destination for skiing. Although it is true that the mountains offer predominantly intermediate runs, there is some seriously challenging terrain close to town here. A funicular from the city centre runs to the Hungerberg plateau and a two-stage gondola carries on to the Seegrube-Hafelkar area on the Nordkette mountain range. Midway, the Seegrube is good beginner and intermediate terrain, favoured by Innsbruckers on their lunch-break. The steeps of Nordkette's upper flanks offer challenging off-piste runs and spectacular views of the city.

The Patscherkofl is one of two Olympic ski sites extending above the plateau village of Igls, and is the location of Franz Klammer's famous victory in the 1976 Olympic Men's Downhill. The main Olympic ski site, Axamer Lizum - 20km from the city centre - is the city's closest large resort. There is a variety of terrain, mainly intermediate, although there's some challenge in skiing the championship courses. There are two much longer runs to be reserved for day's end (not served by lifts) which end in the neighbouring villages.

With 1,367m of vertical, the Glungezer area at Tulfes is best for long cruising runs, including one of the longest runs in Tirol: more than 15 km from the top of the Schartenkogel down to Tulfes. The Stubai glacier area is literally and figuratively the highlight of an Innsbruck ski trip. In bad weather, conditions can be severe, but Stubai offers trails for all skill levels and some challenging off-piste runs.

The Schlick 2000 ski region above Fulpmes offers a modest range of varied and interesting skiing opportunities., while Kuhtai, 40 mins from the city, is the highest ski village in Austria, with 40-odd kilometres of snowsure slopes.

Most of the terrain in and around the Nordkette resort is steep and challenging, so it is hardly surprising that it has established a reputation as a paradise for experts and freeriders. Only the bravest are up to the narrow steep crétes and couloirs atop the Hafelekar, including the famous 'Karrinne' couloir with gradients of up to 70 percent – one of the steepest ski routes in Europe.

When new snow falls, Innsbruck locals also head up to Axamer Lizum, or the slopes of the Stubai. The backcountry terrain of the Birgitzköpfle Area at Axamer Lizum is well-worth getting to early. If you're on the first lifts you'll reap the rewards of a long, off-piste descents all the way back to the base. An especially long top-to-bottom run takes in Mutterer Alm ski resort en route to the village of Götzens.

With its 800 years of history, Innsbruck punches well above its weight for a small city. There are so many bars, restaurants, cafés and different things to do in Innsbruck that it would be impossible to list them all here. Suffice to say that exploring museums and monuments to the area's Hapsburg heritage adds an extra dimension to any ski trip here.

You can dine in everything from five-star gourmet restaurants down to fast-food, but don't miss the chance to stroll along Maria Theresien Street and grab a delicate fork and get stuck into Innsbruck's coffee-and-cake scene, a long-standing staple of Innsbruck afternoons.

Other sightseeing highlights include the famous 'golden roof', the Bergisel ski jump (home to the Air & Style), Swarovski Crystal Worlds and the Schloss Ambras, or Ambras Castle.

You can hire equipment both in Innsbruck itself and at the main ski centres. In town try Die Borse and at Axamer Lizum, the familiar Intersport is reassuringly present.

Navigating the different characters of the individual Innsbruck resorts adds another dimension to the ski school experience. The Ski and Snowboard School Innsbruck in the city centre is a great place to start!