The party capital of the winter, Ischgl ski resort, in Paznaun, in the Tyrol region of Austria's Eastern Alps is the place for an all-action experience, both on and off the slopes. Yes, it's famously got some of the liveliest après ski bars in the world, but when it comes to skiing, Ischgl more than holds its own too. Much of the ski area is high altitude, making it snow sure, and the north-facing aspect of many of the runs means they'll stay in shape late into the afternoon. More than enough time to sleep off your hangover. The slopes stretch all way to Samnaun in Switzerland - a 239km ski area best-suited for mile-hungry intermediates..

If the skiing in Ischgl is excellent from December to April, the après ski is loud and lairy, with some of the wildest dancing anywhere in the Alps. That's not to say you can't find some quieter corners, but really this is a resort for a full-on party experience.

Ischgl's huge high ski area – the Silvretta arena – is the largest in the Eastern Alps, and provides world-class skiing throughout the season thanks to a mix of altitude and lots of north-facing slopes. Even the nursery slopes are at altitude, ensuring you're learning on good quality snow. 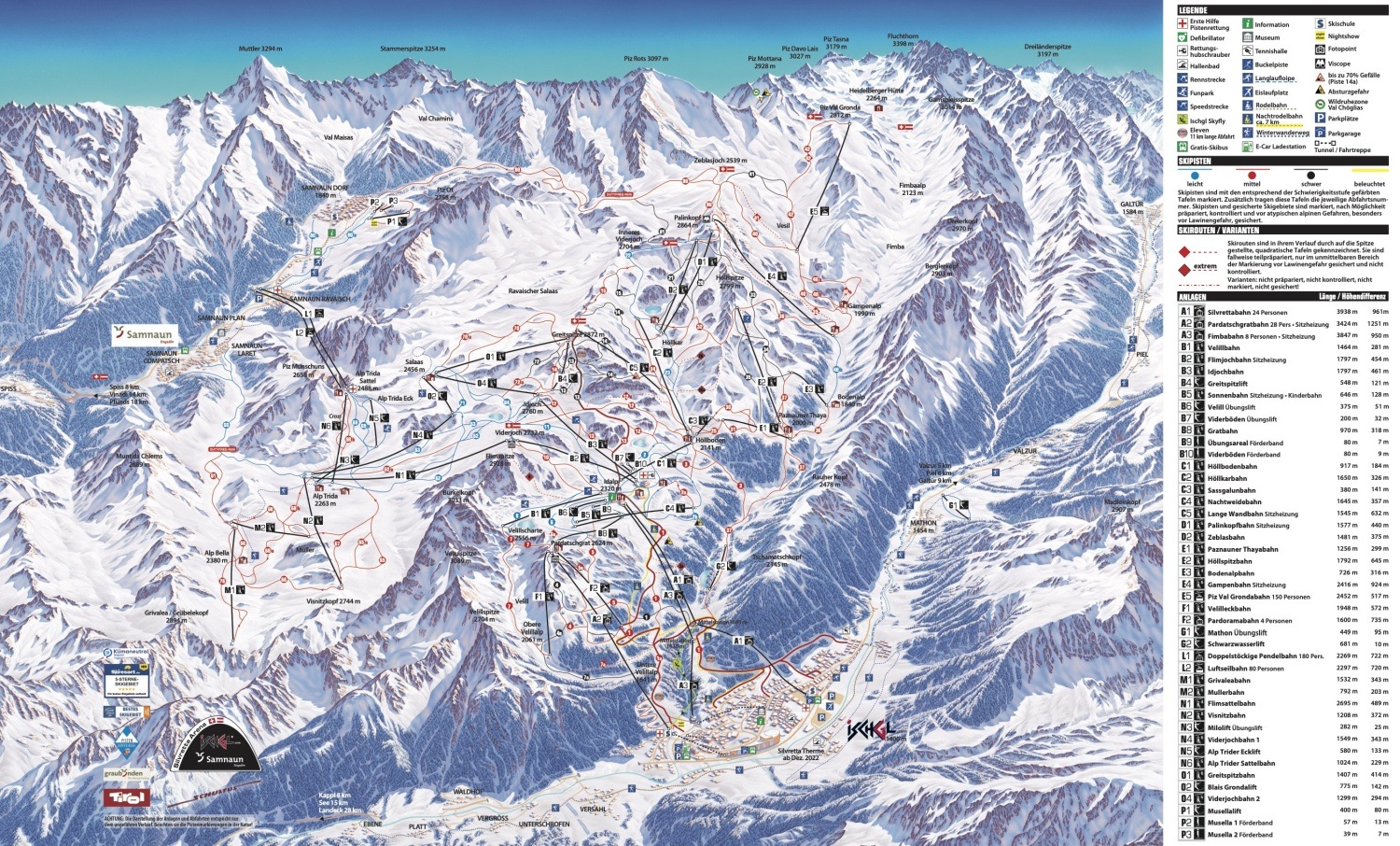 Access to the pistes is via three large gondolas. The ones at either end of the resort, the Silvrettabahn and the Skyfly, climb up to the main mid-mountain hub of Idalp at 2,320m, while a third goes up to Pardatschgrat at 2,624m.

Intermediates have six valleys to explore and the option to ski over the border to Samnaun in Switzerland. The runs include long wide open cruisers of up to 7km in length. There are high alpine bowls and fun runs down through the trees. If you love long descents, Slopes 4 and 5 down from Pardatschgrat are local favourites and the snow stays good deep into the afternoon.

Experts have several black runs and some excellent off-piste options, and the Silvretta Ski Pass also includes neighbouring (but not lift-linked) Galtür, Kappl and See. The lift system for the entire area fast, modern, and up there with the best in Europe.

For snowboarders this is a world class destination, with the brilliant Playstation Vita terrain park providing five kickers, 15 elements on a row and an airbag jump, whilst the groomed and off-piste terrain is also extremely welcoming.

Ischgl has one of Austria's largest freeride areas, with bowls, steep descents and cliff drops providing plenty for powder hounds to get their teeth stuck into. It's also one of the best areas for powder puppies to take their first runs into the soft stuff - the inter-piste snow stays untracked longer than in many resorts and offers everything from gentle introductions to more extreme gullies and drops.

One of the best spots to head for is the Piz Val Gronda lift - which has opened up a freeride playground previously accessible only via a long, steep hike. As always, get a guide - not only will they keep you safe, they'll introduce you to all sorts of spots that the piste map can't.

Ischgl's village is traditional Tyrolean in style, with accommodation from budget up to luxury. Contemporary features include an huge travelator through a  rock tunnel connecting the two ends of Ischgl. But it's as a party town that Ischgl really excels. the Hotel Elisabeth, Niki's Stadl and the booming Trofana Alm are the classic venues for wild après ski action, whilst the resort starts and ends the season with huge free parties which have featured artists such as The Killers, Elton John and Kylie Minogue. The season opener is in town, the closing 'Top of the Mountain' party is, as the name suggests, on the mountain.

Ischgl has extensive cross country skiing with 48km (30 miles) of prepared trails including loops for all abilities. There's also a 7km toboggan run - but sledders are not always sober!

There are around 20 outlets for ski hire in Ischgl, including Ischgl Ren, and Skiverleih Mietski.com.