A good-value gateway resort in Italy's Milky Way ski area. From the Claviere piste map to the best ski hire and après ski bars, here is the lowdown on skiing in Claviere.

Claviere ski resort sits on the Italian-French border at the southern end of the cross-border Milky Way (Via Lattea) ski domain. Its excellent intermediate slopes are shared with the neighbouring French resort Montgenèvre. A small quiet village, with limited facilities, Claviere is best suited to beginners, families and intermediates on a budget.

'Ski Resort' sometimes feels like too grand a term for such a small place, but it does offer a viable low-cost gateway into the Milky Way's 400km of slopes. Claviere usually features as the lead-in price option for ski package holidays to this region, and is therefore a popular destination for UK school groups and first-time ski holidaymakers.

Claviere's local Monti della Luna ski area offers a limited but interesting mix of mostly intermediate terrain that forms the link between the French ski resort of Montgenèvre to the west, and the other linked Italian resorts of the core Milky Way circuit to the north east.

The Claviere and Montgenèvre sectors are fairly seamlessly linked, between them offering sufficient variety and mileage for a week's holiday. This high pass in the Cottian Alps has a fairly good snowfall record, and the Claviere-Montgenèvre ski area usually opens a week or two earlier, and remains open a week or two longer, than the neighbouring Italian ski resorts.

The small size of Claviere means that access to the slopes is fairly convenient, just a short stroll down from the main road to the compact central base area. This area houses the resort's beginners' zone, equipped with an easy-to-use conveyor-belt surface lift, and serves as the finish area for all of the main home-run pistes. 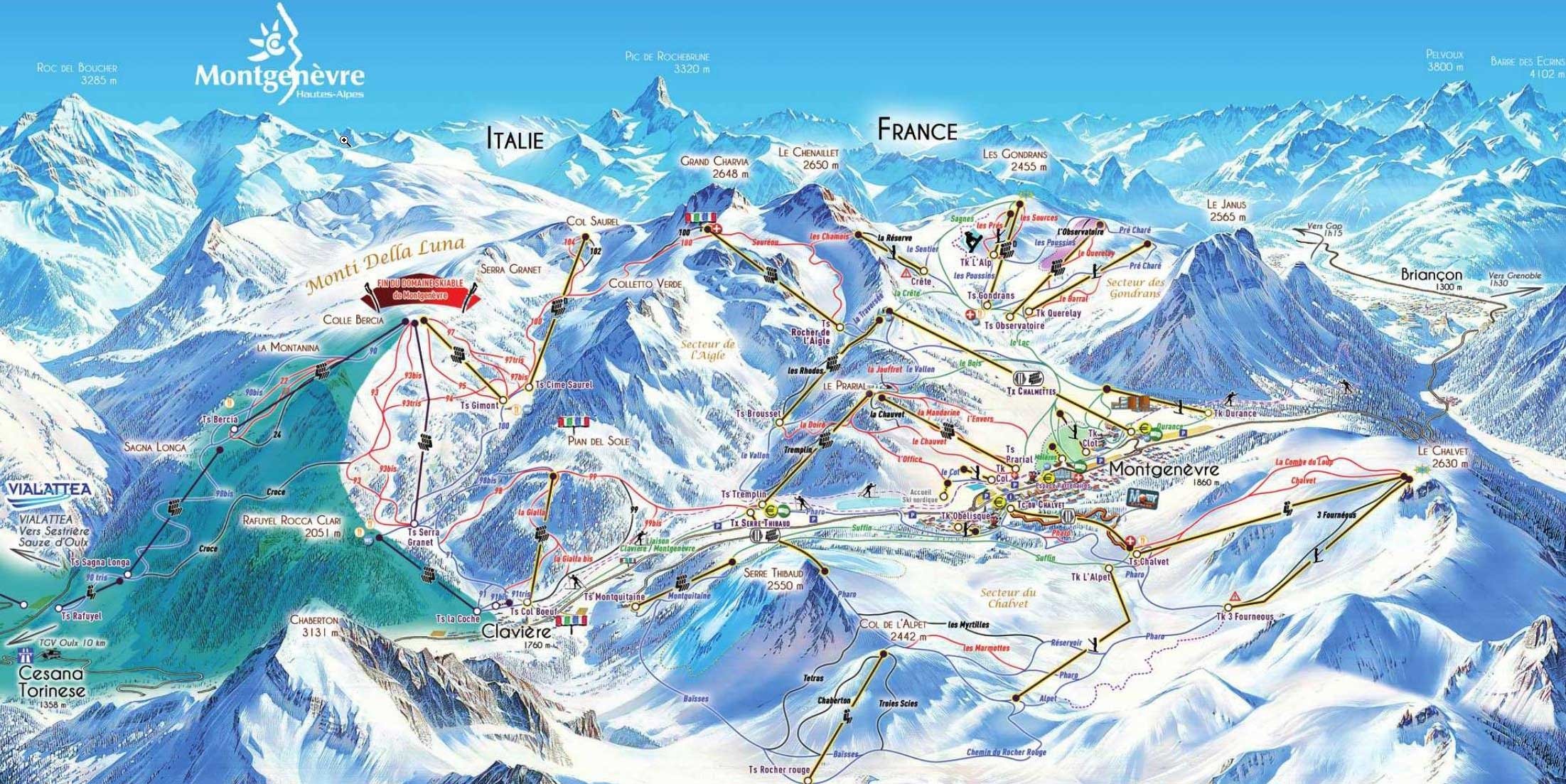 Two chairlifts based at either end of this area link up with a further chairlift that carries skiers into the upper sectors of the resort. Only the runs from these lower two chairs are suitable for novices - all other upper-sector link pistes are classified as red. Nevertheless, the tree-lined, blue-grade, runs back to the base area are great excursions for novices making their first forays away from the beginners' slopes.

The westernmost base-area chairlift also serves a couple of short but good red and black pistes on the forested slopes directly in front of Claviere, as well as a straightforward red-classified link to the nearest chairlift on French territory in the neighbouring Montgenèvre ski area. There's an easier link to Montgenèvre via a separate chairlift based over on the opposite side of the road at the upper western end of Claviere village.

Claviere's own Monti della Luna ski area offers around 33km of mostly short & wide intermediate pistes. Highlights include the pair of longer descents from the Col Saurel, and the runs down to the mid-altitude slopeside hamlet of Sagnalonga. This latter sector is also the starting point for an onward blue-classified cruise down into the valley towards Cesana, for the lift-link to Sansicario and the other Italian resorts of the core Via Lattea domain.

In terms of backcountry terrain, the offering might be modest, but there's some very nice tree skiing on the lower slopes in Claviere itself. There is also plenty of scope for fun sidecountry playing, but serious powder lovers should head deeper into the Milky Way area, exploring Sagnalonga and La Montanina on the Italian side, or heading higher up into the peaks between Claviere and Montgenèvre.

If you've got a guide however, and the snow's good, there's plenty of fun to be had here, despite the fact that the mountains, which top out at 2,800m, aren't hugely high. For a good challenge, head to Montgenèvre and up the opposite Chalvet side - beyond the Col de l’Alpet is the spot to aim for.

Claviere village is no more than a short ribbon of houses, a few hotels, and a handful of shops. All tourist facilities away from the slopes are based in the hotels, with only a couple of basic bars offering anything in the way of life in the evenings.

There is a tiny basement bar at the central Passero Pellegrino hotel, but otherwise nightlife in Claviere revolves around a few sociable drinks in a hotel lounge bar after a leisurely dinner.

For something a bit more exciting, a couple of the mountain restaurants host occasional evening snowmobile excursions for dinner followed by a torchlit ski descents. There’s also a small outdoor natural ice skating rink, but it's usually only open during the coldest mid-season weeks.

The bigger and livelier French resort of Montgenèvre is only two kilometres up the road, although the taxi fare is disproportionately expensive per kilometre. There is a pisted walking route between Claviere and Montgenèvre, safely off the main road, but this high pass is not really the place for a midwinter midnight stroll, unless you've got a good, thick beer jacket on.

There are a couple of decent options for ski and snowboard hire in Claviere, including the resorts's Ski Lodge, also home to a ski museum, and a Skiset, but most of the ski rental options are found in Montgenèvre.

If you want to learn to ski in Claviere, you're pretty much tied in to the local branch of the Italian Ski School.