Dolomiti Superski is ready to go

The Dolomiti Superski is due to kick off its 44th season on 25 November, following a €70 million investment in new facilities, piste upgrades and improved snowmaking, meaning that nature now gets a helping hand on 97% of the area’s pistes.

The famous Sellaronda ski circuit will open on 6 December and close on 8 April 2018, but if there is enough snow, the region’s lifts will keep spinning until 1 May.

With 8 out of 10 sunny days being the norm, the Dolomites are known as the sunny side of the Alps, ensuring that you hardly ever have a holiday here blighted by bad-weather.

But it’s not just the weather that’s a bit special in the region’s 12 valleys. The Dolomites can count five distinct gastronomic cuisine cultures: Trentin, Tyrolean, Ladin, Veneto, and Mediterranean, with 400 mountain huts to tempt hungry skiers. It’s Italy, so what could be better than to linger on the sunny terraces, soak up the sun and the scenery and enjoy a leisurely couple of courses. In addition, the Dolomiti Superski area has one of the highest densities of Michelin-starred restaurants in Italy, with 14 proudly boasting one or two of the coveted gourmet stars. 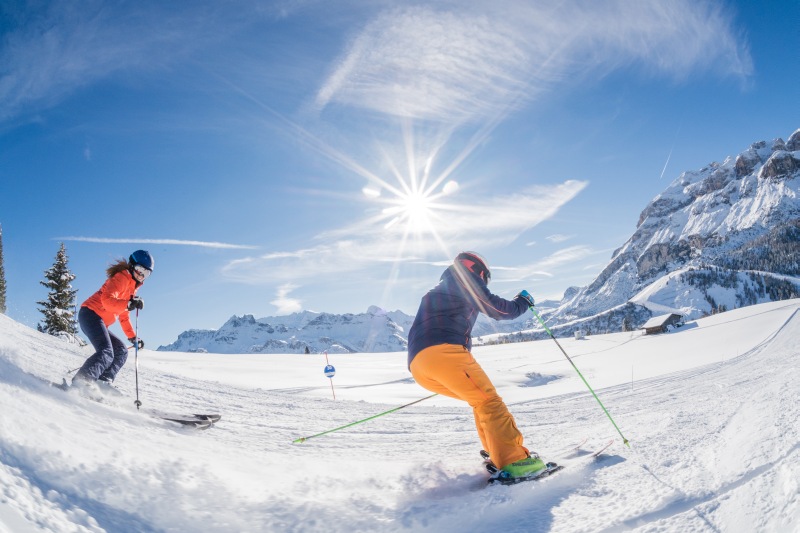 My Dolomiti is your Dolomiti!

More and more skiers these days are going online to monitor and record their ski experience. And these stat lovers will doubtless want to log on to My Dolomiti, a new section on the Dolomiti Superski website, where guests can customise their Dolomites ski holiday.

Using high-tech graphics, you can map your own ski performance, such as slopes covered, vertical drop, how many lifts used and even ‘feelgood factor’, to create a unique personal record of your Dolomites stay.

You can even link your profile to other users, such as other family members, friends or acquaintances, creating a universe of Dolomiti ski fans, and competing to be crowned family champion!

The online fun continues throughout the coming winter season, as Dolomiti Superski will award prizes to the most active skiers in the My Dolomiti community in four categories: biggest vertical drop, most kilometres skied, highest number of different lifts taken, and one grand prize combining all three!

Holders of the MyDolomitiSkicard rechargeable ski pass can also top up online and buy discounted ski passes for juniors, seniors and superseniors. The skicards are available at ski pass offices throughout the Dolomites. Just register on My Dolomiti and you’ll be all set.

Best of the Dolomites

A UNESCO World Heritage Site, the Dolomites’ resorts are among the best in Europe 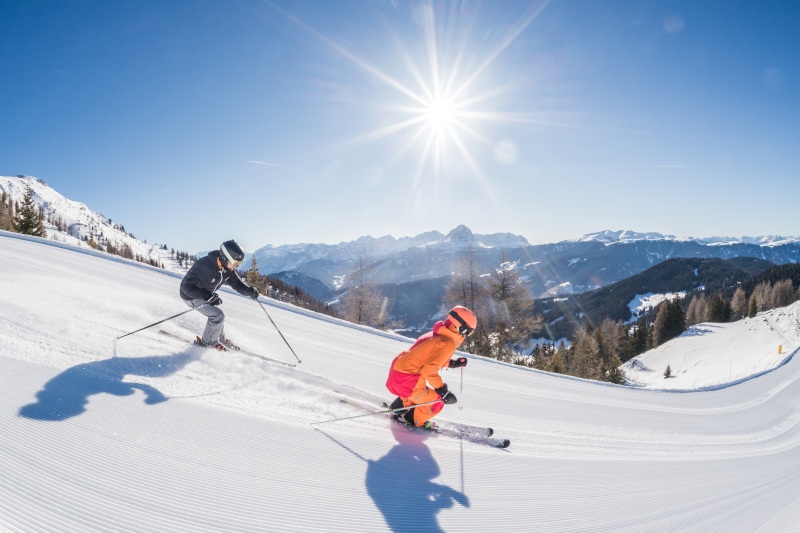 The ‘skier’s mountain’, this South Tyrol resort with 119km of slopes, is one of the few to offer five epic black descents – collectively, the Black Five. The Snowpark is one of the best in the Dolomites, and Reinhold Messner’s Mountain Museum is a must for lovers of all things Alpine. Kronplatz also has short bus and cable links to the Sellaronda and the Tre Cime. 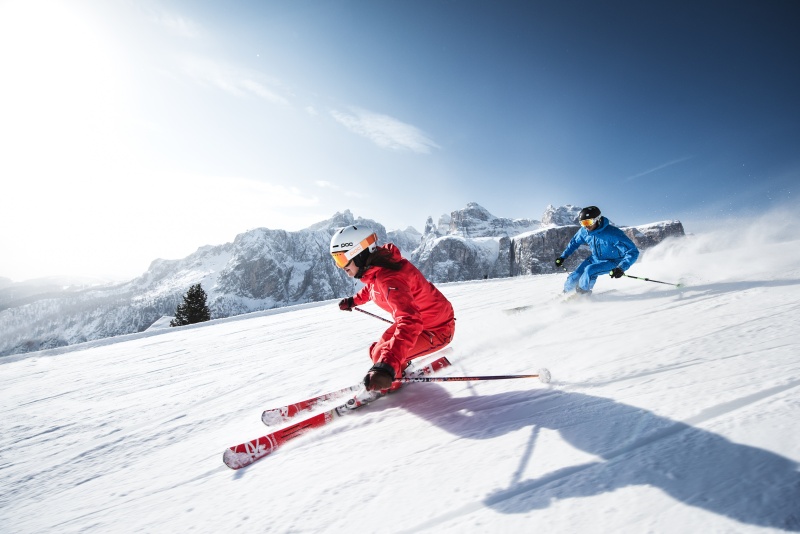 Famous for its gourmet mountain food, Alta Badia lies in the heart of the Dolomites, and is the ideal base for exploring the region. Close to the famous ‘hidden valley’ at Lagazuoi, and with direct links to 500km of carefully groomed slopes – including the Sellaronda ski circuit – as well as modern and safe lift facilities, Alta Badia has everything a skier could wish for. 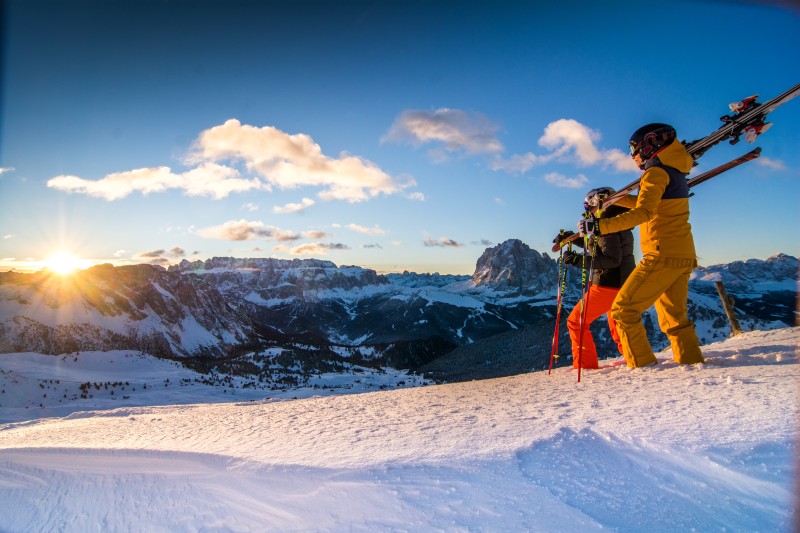 The imposing scenery of the Dolomites take the breath away and sunny Val Gardena has some of the best views in the area. The imposing Passo Sella and the symbol of the valley, the Sassolungo, majestically overlook over the Ladin winter sports location. What’s more, this traditional resort sits firmly astride the Sellaronda.

Arabba is one of the highest villages in the region and, as such, offers one of the most assured chances of snow at any time during the season. This elevated position also affords amazing views of the Gruppo del Sella to the West and the glacial Marmolada massif to the South. Arabba also enjoys some of the most challenging, steep pistes anywhere in Italy, making it ideal for skiers and snowboarders who really want to test their riding. 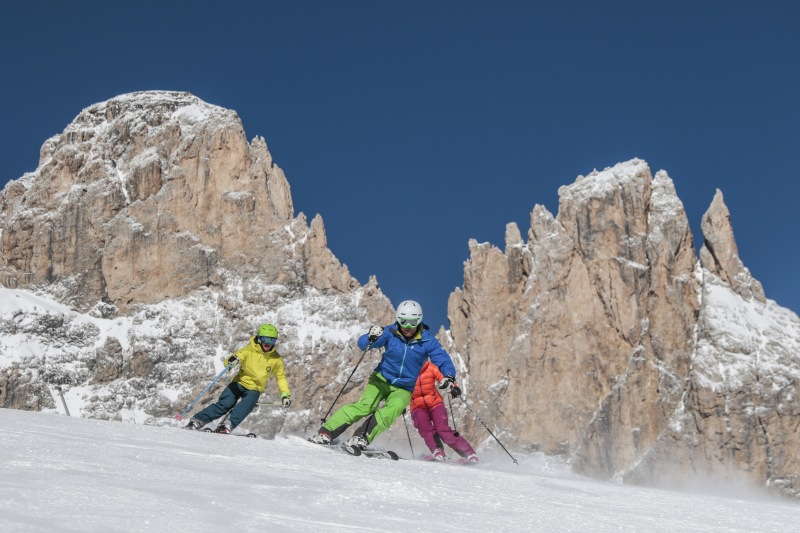 With 210km of slopes catering for all tastes and abilities, 7 different skiing areas, a coveted spot on the Sellaronda, 6 Snowparks, 83 cutting-edge lifts and the technological advances of one of the most important artificial snow systems, Val di Fassa ensures every skier and snowboarder can have a real feast of a time during winter!

In association with Dolomiti Superski