Getting Rad in Gstaad with Jenny Jones

Olympic medallist and multiple X Games champion Jenny Jones takes a sideways look at one of Switzerland’s most famous resorts.

There’s no two ways about it, Gstaad has a reputation. It’s one of those places, like Monaco, whose name alone is enough to conjure up images of fabulous wealth and luxurious excess - with perhaps a dash of high-class decadence thrown in; the kind of ski resort you can imagine James Bond spending time in during the Roger Moore years. (And indeed, as I later learn, the actor visited several times).

But I’d heard that there was more to it than the lazy stereotypes suggest - in particular, that it was home to some amazing freeride terrain. So as I boarded my train in Geneva, I was intrigued and excited.

I meet Rob Grew, the photographer on this trip, at Montreux station. Swiss trains are one of the great pleasures of travelling in the Alps. They’re comfortable and reliable, with luggage racks big enough to fit even my enormous snowboard bag, and the views out of the window are never anything short of jaw-dropping. Perhaps unsurprisingly, given the country’s long history of horlogerie, the system runs like clockwork. In fact, all seems to be going well, until, about an hour in, Rob turns to me and says “can you smell burning?”

Throwing open the door to the luggage compartment, we realise our snowboard bags are on fire - or at least, smouldering away in an alarming fashion. Both mine and Rob’s boots are melting, and plastic smoke is rapidly filling the vestibule. It turns out the brilliantly-designed ski rack in this particular carriage has a less brilliantly-designed heater underneath it. 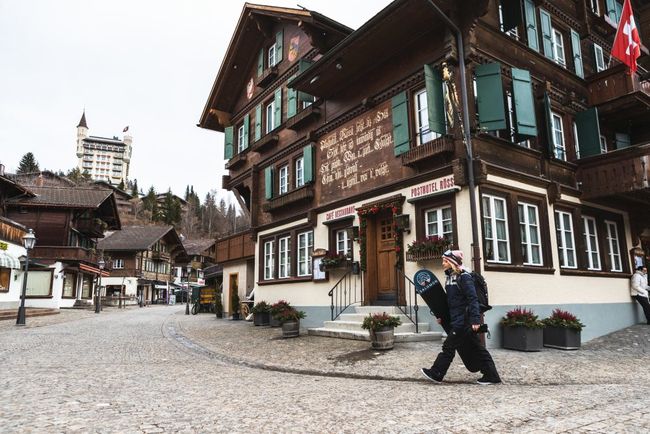 Our bad luck continues as we arrive into Gstaad to find the precipitation we’d been watching on our weather apps is falling as rain. The golf cart that’s arrived to carry us up the hill to our accommodation has impressive looking caterpillar tracks, but only one covered seat. Rob, gallantly, agrees to sit in the back with the luggage, getting gently sleeted on as we drive. Not the most auspicious - or luxurious - start.

The following morning however, things look considerably brighter - even if the weather doesn’t. The Rinderberg Hotel, which we arrived at in the dark, is a charming traditional Swiss alpine chalet with a modern, but cosy interior, and an excellent breakfast. Then we met our guide. Simon Kunz, it turns out, is not only an excellent snowboarder, but also arguably the best person to know in Gstaad. 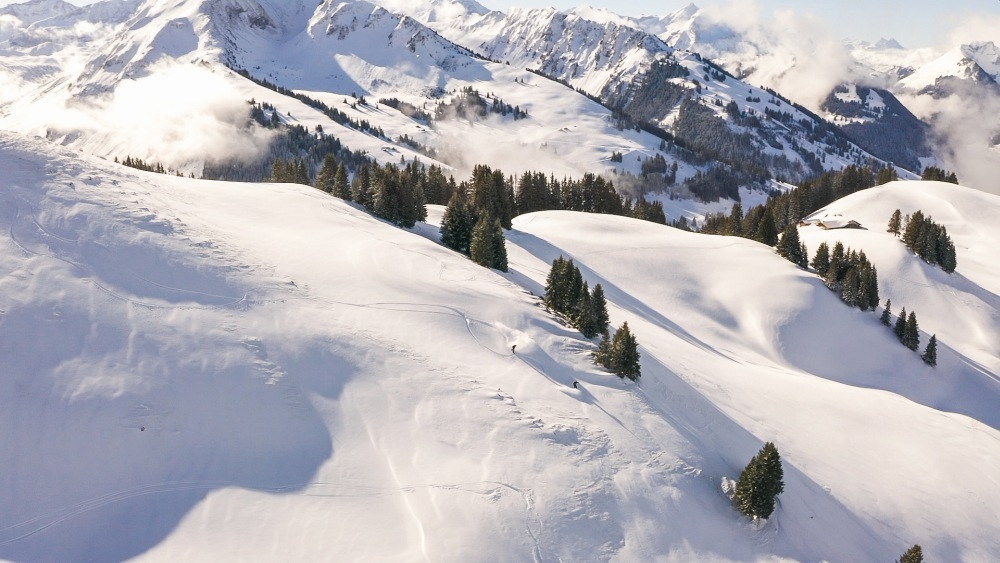 In any town this size, there’s always that one dude who knows everyone and everything - a fixer type, who can sort anything out. Simon, we soon find out, is that one dude. He’s the man about town, saying “hi” to people on the street and shaking hands with people in every café we enter. Unbelievably, he also happens to be an expert ski and snowboard boot fitter - like a modern day Swiss shoemaker, with a workshop full of gear. What are the chances?

With our boots sorted, we head up the hill to explore. The ski resort people call Gstaad is actually seven separate ski areas, linked to the main town by a railway, as well as the winding road. A network of 61 lifts spreads upwards from these seven bases like a spider’s web, covering the gently sloping hills.

"Our guide, who knows everyone in town, also knows the best places to go up the hill"

There are 250km of pistes here, with an elevation ranging from the Zweisimmen base, at 948m, all the way up to the Dôme des Diablerets at 3,016 metres. Almost as far as the eye can see, there are potential lines linking distant cable cars, and Simon, who’s on-hill knowledge is as extensive as his black book of contacts, seems to know them all.

Unfortunately, the weather is against us, but we do start to get a sense of the vastness of the place before Simon decides it’s time to cut our losses, and leads us to his favourite lunch spot. Inevitably, he knows the guy who runs the restaurant, and we’re treated to a wonderfully warming Swiss soup, and a plate of käsespätzle - a kind of gnocchi, smothered in cheese. 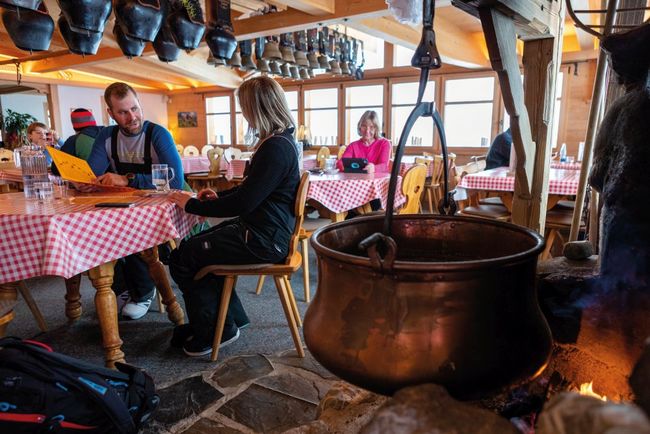 Enormous cow bells hang in rows from the ceiling, while in the corner, a cauldron that looks as if it’s been lifted straight out of the Asterix books dangles over an open fire. It’s cosy, and comforting, and while the food is delicious, the vibe is the opposite to the kind of Michelin-starred pretension you might expect to find in such a famous ski resort.

Down in town, the welcome is no less warm, or genuine. After a second night at The Rinderberg, we transfer to the HUUS Hotel in the centre of town. This is proper Gstaad luxury, but with a modern twist. It’s the kind of place where you find freshly made, mini-macaroons on your pillow as you check in, but downstairs there are decks set up in the middle of the lobby bar, with DJs spinning mellow après tunes every afternoon.

The bar itself is a thing of beauty - a pyramid-style stack of wooden cubby holes containing every kind of alcohol you could ever imagine, and quite a few you probably can’t. Their gin selection alone is enough to make any big city establishment blush. The HUUS is run by a father and daughter team, who make a point of wandering round the bar greeting all their guests with an enthusiasm that’s totally unaffected. For all its luxury trappings, the place feels a little like staying in someone’s house - albeit a very swanky one. 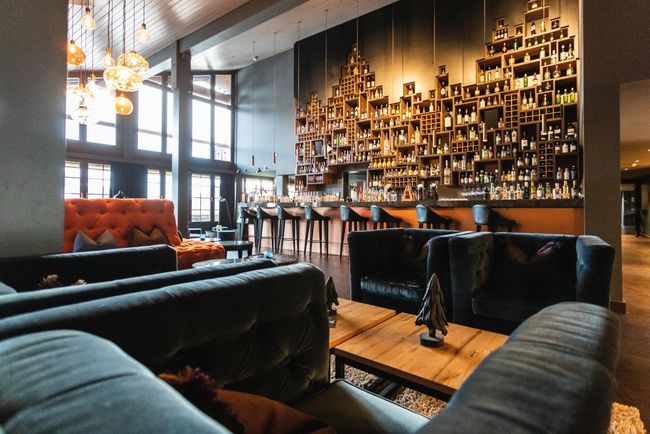 One evening, we venture out on a horse drawn sleigh - Gstaad is entirely car free - to take in the sights of the town. There’s no doubt they are impressive. From the huge white castle of the Gstaad Palace Hotel, famed for its gala dinners in the 1950s featuring Louis Armstrong, to the Louis Vuitton shop on the high street, the place oozes class.

“That’s Bernie Ecclestone’s chalet,” our guide says at one point (the former-Formula One impresario married his third wife in the £23 million pile, apparently), “and that one belongs to Julie Andrews”. The star of Mary Poppins and The Sound of Music bought the Chalet Fleur de Lys in 1971. She’s spent half the year in Gstaad ever since, becoming something of an unofficial ambassador for the town. Alongside all this obvious wealth however, there’s a pretty old town, with the kind of winding, narrow streets you’d find in any ski resort, and a dedicated snowboard shop called - appropriately - Pure.

The fact that this is a playground for the rich and famous has its advantages when it comes to riding. High winds mean we never make it all the way up to the glacier at Les Diablerets, but we spend the next two days lapping the lift from the Saanenmöser base, and riding the freshly fallen powder beneath a picturesque peak called the Horntube (no sniggering at the back!) 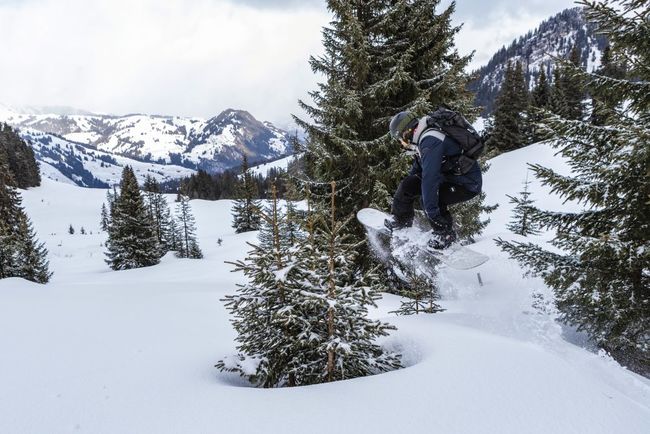 These are easily accessible lines, and like everywhere in Gstaad, the mellow gradient would make it perfect for mixed-ability freeride groups, or snowboarders who want to throw tricks into their runs. But because a lot of the clientele are confirmed blue run cruisers, we seem to have the backcountry almost entirely to ourselves.

Near the end of our trip, Simon takes us across to Eggli, where a new cable car designed by Porsche whisks us up the mountain. It’s the height of sophistication, with heated leather seats, Bose surround sound, and huge panoramic windows in each bubble. When we reach the top, if anything, the view is even better. This is a whole new zone, and again, we can see lines everywhere. As with Saanenmöser, the gradients are mellow - sort of like the slopes in Japan - but there are gullies, rock drops and tree-runs everywhere. The potential is enormous. 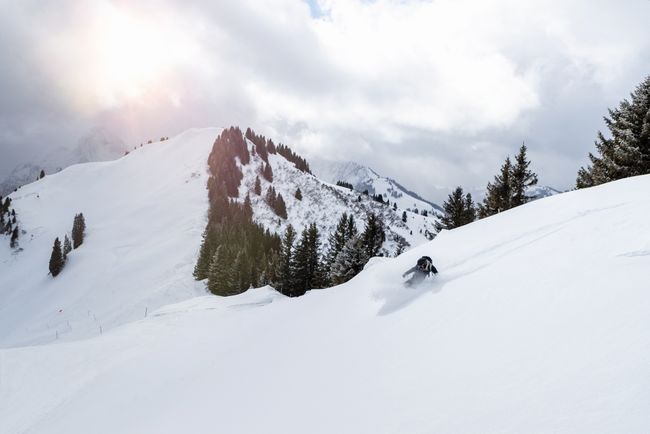 There’s no doubt this famous ski resort has its reputation for a reason. But Gstaad, it turns out, is also rad, with enough fun, backcountry freeride terrain to make even the unflappable Roger Moore raise an eyebrow.

Rock Around the Clock

It might be synonymous with old money, but there’s nothing staid about the parties in Gstaad. Here are four celebrated hellraisers who’ve combined winter seasons with serious sessions here.

The famously hard-drinking author made multiple trips to Switzerland in the 1920s, and became a proficient skier on the slopes of Gstaad. He and his friend F. Scott Fitzgerald were known to frequent the bar at the Gstaad Palace, and Fitzgerald set a scene in Tender is the Night in the town.

The sonorously-baritoned Welshman became a fan of the Swiss village as a place to retreat to when public interest in his long and tumultuous relationship with Elizabeth Taylor became too much. The pair owned a chalet here in the 1970s, and while they spent a lot of time with their kids, that didn’t mean the partying stopped.

Her Madge-sty has made several trips to Gstaad, and while the Swiss resort has mostly seen the more mature side of the superstar - rather than the provocative party-animal of the early 90s - she and her entourage are more than capable of causing a stir. In 2014, her daughter Lourdes was photographed snowboarding, and flipping the bird at the paparazzi following her.

France’s answer to Elvis was famous for his hedonistic lifestyle, his five marriages, and the smouldering gitane which never left the corner of his mouth. A regular at the Gstaad Palace bar, he went on to buy a chalet in town. 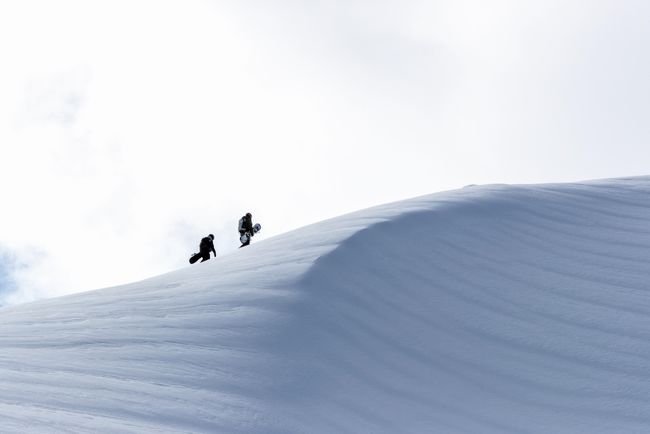 Jenny and Rob’s trip was hosted by Destination Gstaad and the Swiss Tourist Board.

SWISS fly London to Geneva from £76 one way with free ski carriage. Hop on the excellent Swiss train network, the Schweizerische Bundesbahnen or SBB, straight from the airport. Trains via Montreux take around 2.5 hours.

There’s good food everywhere in Gstaad, but the incredible restaurant at the HUUS Hotel should be high on your list of dinner destinations. And make sure your budget stretches to at least one drink in the Gstaad Palace - it’s a must-visit.

Jenny and Rob stayed at The Rinderberg Hotel, a ski-in, ski-out mountain hut at the top of the lift of the same name. They then moved to the HUUS Hotel in Gstaad itself. One of the town’s best modern hotels.