We challenge Olympic skier and presenter Graham Bell to squeeze in five resorts in six days on the ultimate Swiss ski adventure.

When Snow Magazine calls and asks me to plan a whistle-stop tour of Switzerland, jetting in and out of five resorts in just six days, I immediately get planning. The obvious starting point is the birthplace of winter sports, St Moritz, which sits at the heart of Switzerland’s largest and most easterly canton, Graubünden. My journey will take me westwards to Engelberg in Obwalden, through Interlaken, to Wengen in the Bernese Oberland, and finish in the French-speaking resorts of Nendaz and Morgins in Valais. St Moritz was a popular summer destination in Victorian times - until 1864, that is, when local hotelier Caspar Badrutt wagered some British guests their travel costs that they could have as much fun, if not more, in the winter. By 1948, the resort had already hosted the winter Olympic Games twice. Seems like the perfect place to start my Swiss skiing adventure. 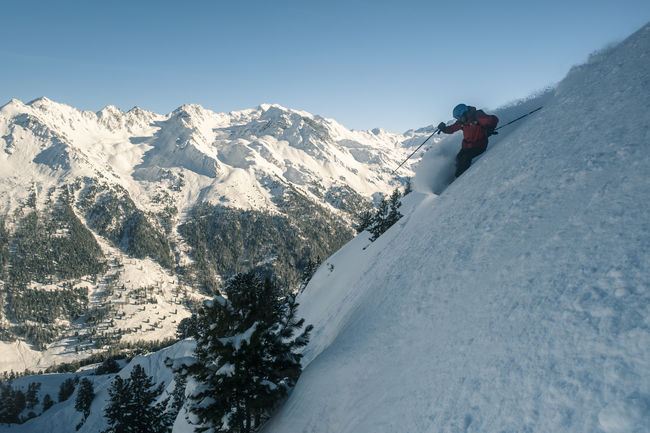 Arriving in St Moritz, it appears that not much has changed since winter sports first took off here. Grand Victorian hotels still tower over the frozen lake, where marquees are laid out for the White Turf horse racing competition, a ski-joering race in which skiers are towed behind their steeds. Our hotel, the Steffani, has belonged to the same family for four generations and has been welcoming guests since 1869, proprietor Francesca Märky explains. It turns out the hotel is also a favourite with the British forces, who have just taken part in the inter-services Cresta Run competition. Celebrations in the bar are picking up a head of steam, but I cite an early start on the mountain and retire to bed.

St Moritz has a number of ski areas covered by the same lift ticket, but with just one day to explore I decide to stick to Corviglia and Corvatsch.  Although it has hosted the World Alpine Ski Championships five times, the Corviglia mountain consists of mainly cruisey, wide-open red runs that allow you to blast around at serious speeds. We catch a ride up the Piz Nair gondola and look down at the new start hut for the men’s downhill race, known as the Free Fall, in which racers launch themselves down the 45-degree slope and reach 85mph in just a matter of seconds. You cannot ski in swanky St Moritz without stopping for a posh lunch, and we have ours planned at the CheCha Club, run by renowned chef Reto Mathis, where black truffle pizza followed by a seafood linguini set us up for the rest of the day. A short bus ride from St Moritz Bad takes us to the Corvatsch mountain, which has a very different personality to Corviglia and was once a host of the Freeride World Tour. The off-piste is plentiful and challenging, and even the home run to St Moritz town, the Hanhensee, is a fun but steep black run that we finish up by blitzing down.

Next stop Engelberg, another Swiss town with a rich history. The town also has an even richer ski racing heritage, with World and Olympic Champions Erica Hess and Dominque Gisin both born here. In recent times Engelberg has become famous for freeriding - as much, perhaps, as Hawaii is for surfing. So where better to stay than the Ski Lodge, a hotel dedicated to freeride skiing? Fresh snow is falling as we scoff down dinner and plan our assault for tomorrow on the Engelberg Big Five – the region’s five most iconic descents.

Our mountain guide, Thomas, and Andre from the Engelberg tourist office, meet us at the crack of dawn. Thomas carries all the gear you would expect for a guide, but Andre is sporting a pair of 130 flex race boots – interesting. We make our way up to the top of the world’s first revolving gondola, the Titlis Rotair, which tops out at 3,028 metres. Our first descent is Steinberg, a huge bowl under the gondola flanked on either side by cliffs lined with beautiful rock strata. Thomas leads the way and Andre shows his hand as a former ski racer-turned-freerider by blasting down at the back. We then make our way to the secluded snow-trap gulley known as Steintali, heading towards the couloirs on the Sulzli. Finally, to wrap up the day, we tackle the long Galtiberg descent, 2,000 metres of vertical magic leading right down to the valley floor. To say I am impressed would be an understatement. I can see why Swedish slalom ace Mathias Hargin spends so much of his time up here.

After a long day of freeriding we finally get a chance to rest our ski legs in the valley town of Interlaken. It’s our third day in Switzerland but we’ve somehow not eaten any traditional dishes, so there’s only one thing for it to rectify the situation - fondue. Swiss fondue recipes are a closely guarded secret, but our chef does divulge the key ingredients of his recipe: a mix of Gruyere, Emmental and Appenzeller cheese, with plenty of wine and kirsch. 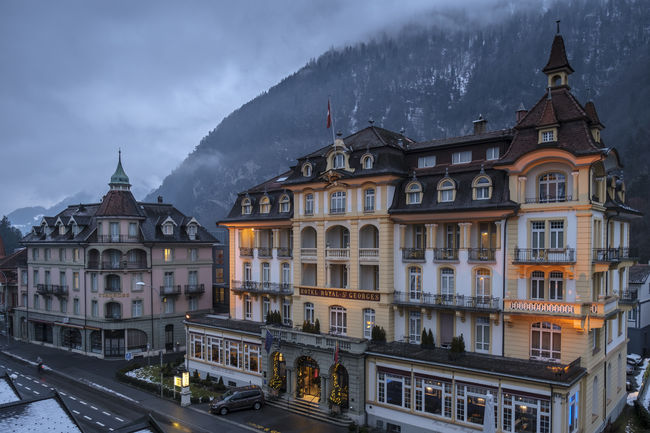 Next morning I catch the train up to the picturesque and car-free town of Wengen. I’ve been here often, but normally during the Lauberhorn World Cup weekend, when it is far from peaceful. Our goal for today is to ski the longest downhill race piste in the world, but luckily without the thousands of spectators lining the track. The impressive mountain panorama in Wengen is, I think, one of the most beautiful in the world, with the Eiger, Monch, and Jungfrau mountains towering over the ski area spread out below them.

The rack and pinion railway up to Kleine Scheidegg was built in 1891, and from here it’s possible to catch the Jungfraujoch railway up to the highest train station in Europe at 3,454 metres. The snow begins to fall and we’re treated to a foot of fresh powder on the Lauberhorn piste. It takes us considerably longer to ski the 4.5km piste than the two minutes and 24 seconds that is the course record, set by Kristian Ghedina in 1997, but we have a lot of fun along the way. 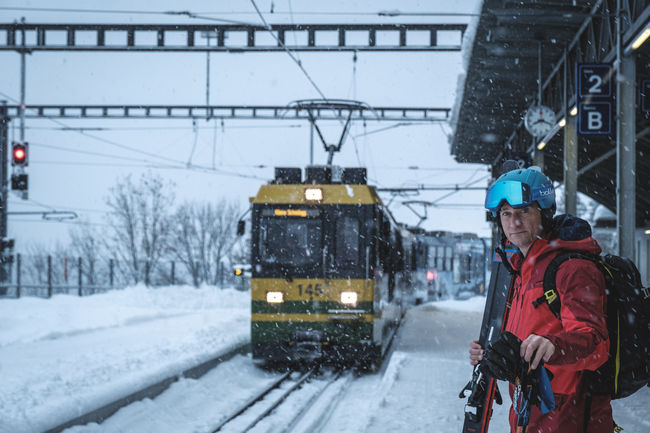 We arrive at our next destination, Nendaz, in time to enjoy the Spa des Bisses at the Nendaz 4 Vallées hotel. Bisses are wooded irrigation channels that were traditionally built across the mountainsides of the Valais - in the hotel’s spa area they traverse through the complex, giving off the relaxing sound of a babbling brook. It’s a very peaceful introduction to Nendaz, which sits in the middle of the 4 Vallées, the iconic ski area that stretches from Verbier to Veysonnaz and Thyon. We are here with a purpose - to ski the patrolled itineraries that make the region so famous. Marked as yellow lines on the piste map, these runs are not pisted but are avalanche controlled, and are checked at the end of the day by the ski patrol. I’m familiar with the routes from the top of Mont Gelé and the route from Mont Fort to Tortin, but I’ve not yet skied L’Éteygeon, on the far eastern side of the area. We’re greeted with a bluebird morning as we make our way over to the Greppon Blanc and hike up over the ridge, going a little further than the others before us to ensure fresh tracks on L’Éteygeon, which is, as promised, a wonderfully long and scenic route, looking down onto the town of Sion and the flat valley stretching out below.

Our final destination is Morgins, in the Dents du Midi region. This is the Swiss part of the Portes du Soleil, the second largest international ski area in the world linking 12 resorts in France and Switzerland. Morgins is a beautiful and unspoilt mountain village famous in the summer for its herd of Hérens fighting cows, and in the winter for its epic tree-lined descents. In 2016 Morgins also created its own area dedicated to skiing uphill rather than down. Known as the Rando-Parc after the French term for ski touring, randonnée, it’s the brain-child of former Patrouille des Glaciers mountaineering race winner Yannick Ecoeur.

The seven ski touring tracks are graded by difficulty and length and vary between 35 minutes to 2.5 hours in duration. We meet up with Yannick to climb a red-graded route that will bring us out at the top of the Foilleuse chairlift. For me, the pleasure of ski touring is the ability to get away from the masses, and in some resorts that can be particularly difficult on the lower slopes, where you have to hug the edge of a busy piste, watching constantly for out-of-control skiers.  These ski routes solve that problem, and I’m pleasantly surprised to hear that they stay open into the evening. I can imagine happily skinning  up with a head torch, getting a bite to eat at the top station restaurant, then skiing back down on the piste, which stays open until 10pm. Sounds like a pretty epic day in the mountains. As we ski down the valley, it seems fitting that our whistlestop tour of Switzerland has finished with a desire to stay and explore more of these peaks. I’ve been coming here for years, but still feel I’ve only scratched the surface of what the Swiss Alps have to offer.

Fly from London to Zurich with Swiss Air from £84 return.

Graham travelled with a Swiss Travel Pass, which allows the holder to use trains and public transport across the country. From £193 for a three day pass.

This friendly, family-owned hotel in the heart of town has cosy rooms and a smart spa. Doubles from £224.

Designed to be a hub for mountain lovers, the Ski Lodge’s comfy beds and hearty breakfasts will definitely set you up for a day on the pistes. Doubles from £164.

This hotel in the city centre may date back to the 14th century but it still boasts all the mod cons. Doubles from £192.

Five minutes from the cable car and with an excellent restaurant and wine cellar, Wengenerhof is great for skiers and foodies alike. Doubles from £174.

A sprawling chalet-style hotel with a great spa, Hotel Nendaz is the perfect place to relax tired ski legs. Doubles from £162.

A luxurious boutique hotel run since 1880 that makes a great base for exploring the Portes du Soleil ski area.