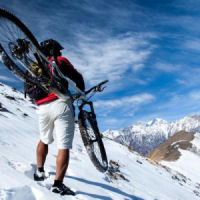 Whitechapel in London’s East End is not the first place I think of going for adventure, other than maybe the kind of adventure I don’t like, such as running from a crazed drunk or a gang of hoodies. But last week Whitechapel was full of Gortex coats and Merrell shoes as the 2012 Adventure Film Festival hit London.

The AFF has been touring the country, and continues to do so, with a series of nights broken down into three themes: ‘High altitude’, ‘Adrenaline’ and ‘Endurance’. I went to see ‘Adrenaline’, which opened with by far the best film of the night, Dark Side of the Lens by Mickey Smith, a moody yet inspirational short on surf photography/film making featuring the lines: 'If there’s no future in it, at least it’s  a present worth remembering.'

This was followed up by a snippet of Charley Boorman’s latest offering, in which he cage dives with sharks off the South African coast. Now call me a killjoy, but Charley Boorman driving on his bike with a massive support network in 4x4’s following along, is not what I call adventure. I always say to my son, 'If you don’t like something never boo, just keep quiet', but I found myself biting my tongue a little while watching Boorman and wondered if his inclusion was something to do with cash, or getting a face for the London gala night (1st Nov at the Vue West End). On the other hand, I guess swimming with a great white shark, all be it from a cage, would get the adrenaline going.

We were soon back with the real action with Strength in Numbers from Anthill films, which was a collection of footage through grass root mountain bike events, to sponsored riders in some of the world’s best spots. Tempting Fear was up next, featuring Andreas Fransson, known as the boldest extreme skier in a generation - absolutely nuts is what I’d call him. His voice over gave a real insight into the mind of a true adventurer, and was truly gripping.

The night finished with a couple of short bike films and an interesting take on kayaking rivers in The Shapeshifters. It was a great night, and a real bonus - and far more engaging - to see these films on a big screen, rather than watching them on YouTube, and I’m looking forward to ‘Endurance Adventure’ which is next up for me.