A new charity aimed at introducing wounded, ex-soldiers to skiing is to hold its inaugural ski week in the Swiss resort of Klosters, at the beginning of March. 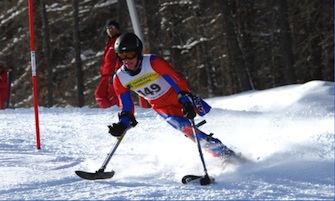 Twelve ex-servicemen and women, chosen from over one hundred applicants, will use a variety of adaptive skiing techniques, including sit skis and outriggers, to experience skiing for the first time. They will be accompanied by volunteer 'Buddies' as they learn to ski.

The charity's founder, Gilly Norton, was inspired to set up the Skiing with Heroes after watching the BBC documentary Waking With The Wounded, in July last year. She said: "Skiing offers unique rehabilitation: it can have a transformative effect on a [wounded serviceman's] outlook on life".

Martin Hewitt, a former Captain in the Parachute Regiment who was shot in during service Afghanistan and has competed as a GB Paralympic ski racer, is a spokesperson for the charity. He said: "After months in re-hab', learning to ski will be the first time that some of these soldiers will have been able to do something that is fun, since sustaining their injuries".

He went on to say that the charity, which has strong support from many UK businesses, will also be developing a programme to get ex-servicemen back in work.

The inaugural Skiing with Heroes ski week takes place between March 2nd and March 9th, and is supported by the resort of Klosters.

To donate to the charity or for more details go to: skiingwithheroes.com