A great choice for mixed ability groups and beginners, Chamrousse has a gilded history. As well as being the birthplace of French skiing, courtesy of Henri Duhamel, an alpinist from Grenoble, who made the first descent on skis here in 1878, it’s also where French ski legend Jean-Claude Killy made his name winning three gold medals at the 1968 Grenoble Winter Olympics.

Chamrousse is the closest ski resort to the city, a favourite with locals, and an excellent place to take the family for a ski holiday. There are two main lift bases offering sheltered slopes and ski-in ski out accommodation, but it's close enough to town that you could easily rent a car and drive up from Grenoble each day - a roughly 40 minute drive - should you wish to combine skiing in Chamrousse with a city break.

As well an dedicated beginners’ area, Chamrousse's proximity to Grenoble means it's become something of a favoured hangout for the city's sizeable snowboard and freestyle skiing population, and the Sunset Park has developed into one of the best for a small resort anywhere in the Alps.

There's also a Nordic Skiing Centre with 40km of tracks, and bags to do for the kids, with sledging areas and ventures such as dog sledding and teen snowmobiling.

Chamrousse is a ski resort is of two halves: Beginners and intermediates will enjoy the many green and blue runs reached from the chairlifts at Chamrousse 1750, whilst the terrain above Chamrousse 1650, being steep and varied, offers more choice for better skiers. There are seven black and seven red runs here, and it's in this latter area that the famous men's downhill lies - at four kilometres, it's the longest run in the resort, and a must for wannabe Jean-Claude Killy's of any age. 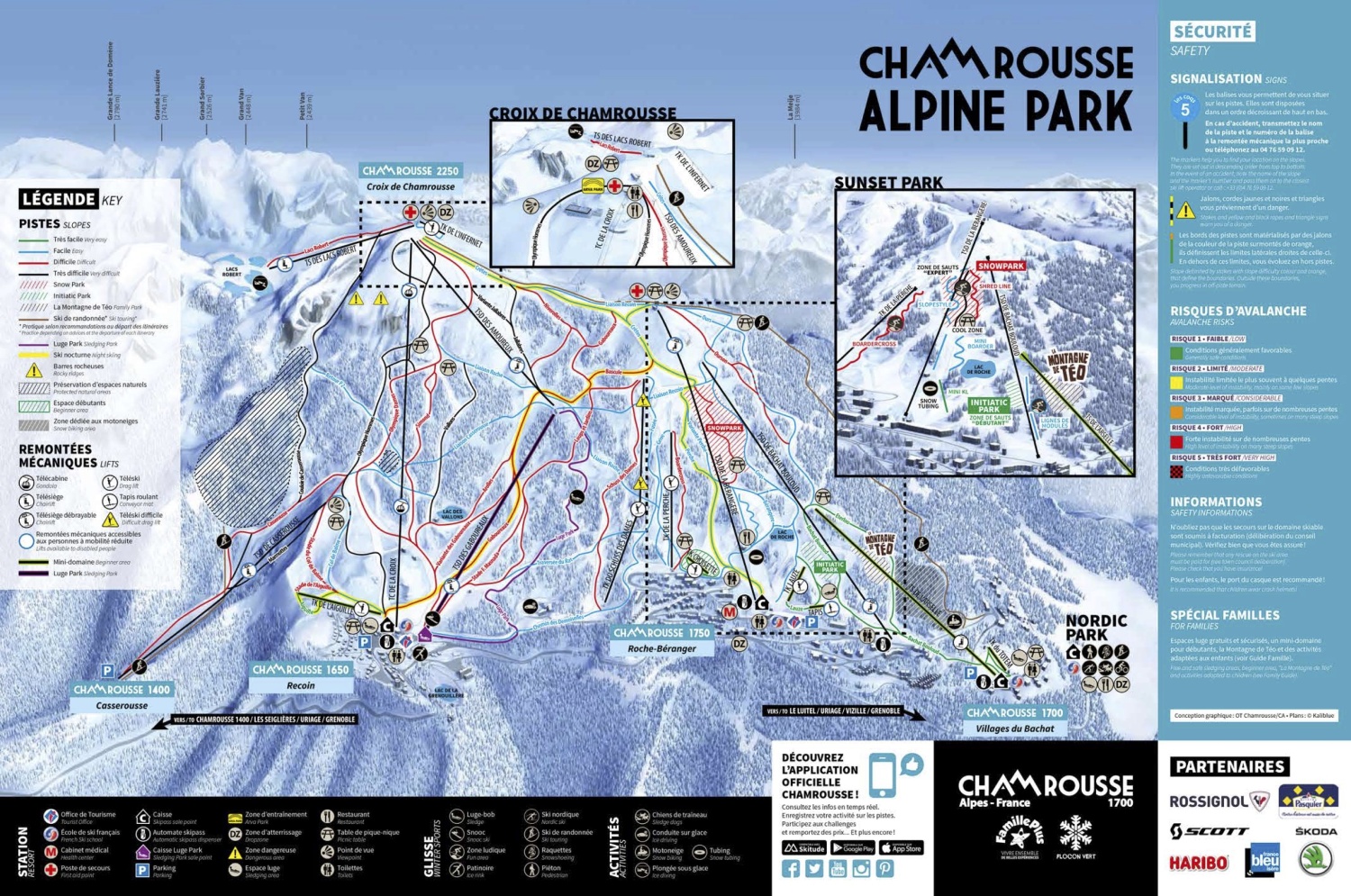 The resort is not hugely high - the top lift rises to just 2,250m above sea-level - so much of the 90km of piste is below the treeline. The wide, well-groomed pistes which sweep through the pines make Chamrousse an excellent place to come if the visibility is poor, and the trees help keep the slopes sheltered from winds that batter higher alpine terrain. It's great for intermediates, while novices should head to Bachat Bouloud, the special "beginner" area, with a sled run dedicated for children.

With its west to south westerly aspect, Chamrousse does get a lot of sun, which can mean that the skiing is icy in the morning and a bit slushy in the afternoons, particularly as the season progresses.

Things can get somewhat crowded at school holiday times and weekends because of its proximity to the city, but with 20 lifts providing an uplift capacity of 30,000 skiers per hour, the queues usually clear pretty quickly. At the top of the ski area, at Croix de Chamrousse, you get exceptional 360 ° views.

Given the lack of height or high alpine terrain, the off-piste here isn't world-class, but it's pretty good for a small ski area. There are a ton of fun features to pop off between the pistes, and the sheer number of tree runs makes it a great place to come when it's dumping.

When the weather's better, drop off the back of the top lift towards the Lacs Robert and you can get some decent powder turns if the snow's good. If you're prepared to stick your skins on and book a guide, there are some epic routes you can tour to from here. The local ESF runs off-piste skiing days or half-days.

Between the two villages there are 25 restaurants ranging in price and style, most of them serving variants of French cuisine although there are one or two pizzerias.

The nightlife is centred around the 25 bars and restaurants in the resort and is fairly low key. L'Embuscade Pub is one to check out, while the K-Dox pub at the foot of the slopes next to the Arselle chairlift is a popular spot for a post-slope drink.

For ski schools in Chamrousse, the obvious first choice is the local ESF ski school.