Kicking Back in Klosters

The Swiss ski resort of Klosters has a reputation for meeting the skiing needs of the Monarchy and the super-rich but dig a little deeper and you'll find that the twin-centred ski resort, in the Graubunden region, has everyone in mind.

The toilets at the Züggenhüttlibar a cosy, cool little restaurant on the sun-terrace that is Madrisa mountain, are on the ground floor (unlike in most mountain eateries where going to the loo involves a precarious traipse in ski boots down slippery stairs). And whilst rest room satisfaction may not necessarily be the best way to judge a ski resort, the location of the lavs shows that, rather than being an exclusive outpost, Klosters actually welcomes every type of skier: the restaurant was purposefully built with wheelchair access. 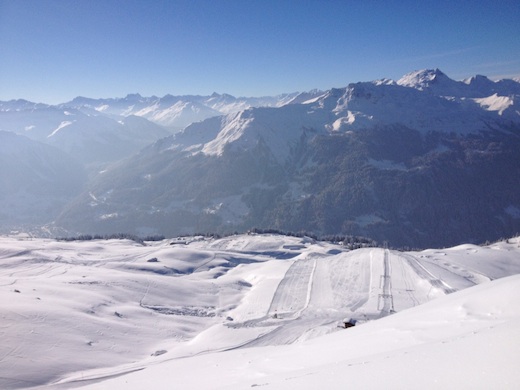 Madrisa is the sunny side of Klosters, a five-minute, free bus ride from the centre of the main village, it's a dream of a mountain for families, sun-lovers, intermediate skiers and, with a fresh blanket of snow covering the entire mountain, has huge potential for gentle off-piste. What's more, if Klosters' neighbour, Davos, is successful in bidding for the 2022 Winter Olympic Games, it may well be the host of the Winter Paralympics. In March this year its inclusive facilities will be put to the test as 12 wounded ex-servicemen travel to Klosters for a learn to ski week, organised by the charity Skiing With Heroes, and sponsored by hoteliers and the resort.

Our guide Jurg takes us to the top of the Madrisa lift, where he pauses to point out Austria, which lies just over the ridge from the 2806-metre high Madrisahorn. A bluebird morning spent fooling around in the powder follows: I'm creating lines that look like they've been left by Scooby Doo but thankfully, despite the perfect conditions, there are few people competing for space in the fresh stuff, and more importantly, only a handful of fellow skiers to witness my off-piste mishaps and antics.

Back on the pistes and, although it seems like things can't get any better, they do. A cruisey red, Schafcalanda, skirts around the Bärnet peak and then drops down into dense forest delivering us to Berhaus Erika, in Schlappin, a snow-bound hamlet on the valley floor. 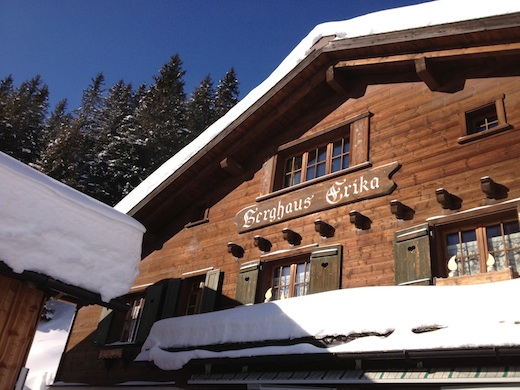 Erika's has been around almost as long as they have been skiing around here - the guest book dates from the 1920s, and it's a picture postcard location where it would be easy to hole up for the rest of the day. Topped up with hot chocolate we ski on, though, tracing a gurgling stream, peppered with huge pillows of snow, which leads us back to the base and from where we head back up to Züggenhüttlibar for well-earned lunch of raclette CHF22.50 (around £15.50). With my backside parked on a sheepskin rug and a panoramic view of the valley it's a perfect pause in what's turning out to be a perfect day.

Klosters is the last village at the end of the Prättigau Valley. It's a two-hour train journey from Zurich, or around a 90-minute drive by road. It's an old-money kind of place with a strong sense of local community - you'll find lovely family run, four-star hotels here, rather than the big five-star hotel chains. I stayed at the welcoming and cosy Hotel Alpina, a 50-metre stroll from the main lift and so close to the train station that you could could be installed at the bar in less than 60 seconds of stepping down from your carriage. And although there are super high-end chalets here like the sumptuous Chalet Bear, there are budget options that are surprisingly great value for money - the Soldanella Youth Hostel costs from €48.40 per night.

On the other side of the valley is the more extensive Parsenn ski area, which links to the pistes at Davos (together the two resorts have around 300 kilmetres of pistes). The Gotschan cable car, which at 9.15am resembles London Underground's Northern Line, takes you from the villlage (1,124m) to the peak of Gotschnagrat (2,285m). A much larger, more varied ski area with less of the family vibe and more for the serious skier, Parsenn provides tree-skiing, challenging off-piste and the chance to go further afield, all of which means that the crowds quickly disappear. 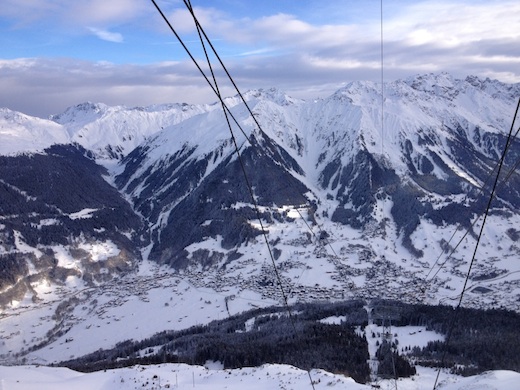 For the more adventurous and those with thighs of steel, Jurg suggests skiing a 12 kilometre route from Weissflujoch (2,662m) through the trees, on and off-piste, to the distant village of Küblis (810m), and then taking the train back to Klosters.

The last run of the day and we ski down to the base past Berghaus Schewendi where we'd lunched piglet ragout - think melt-in-the-mouth pork in a thick red wine sauce - two days before.

Klosters is everything that the big, brash, McDonald's-style resorts of Europe are not: it's a friendly, welcoming place with great skiing and, in reality, only has a little bit of posh.