Ski writer Brian Robinson knows what he likes. And as a sports and leisure consultant by day, it’s his job to know what ‘ticks our boxes’ too. He’s pretty sure we’d like the idea of combining some hot nights in the entertainment capital of America, Las Vegas, with some chilled out time on the slopes of Southern Utah

I like nightlife, but somehow skiing all day and playing long into the night just isn’t enjoyable any more. I find myself back home totally exhausted. One solution is to separate the hot nights from the revitalising cool days.
For all that Las Vegas can offer, snowsports are not on The Strip’s menu. There is a small Las Vegas Ski and Snowboard Resort west of the City, but averaging only 120 inches of snowfall annually, it is hardly worth travelling 5,000 miles for.
Fortunately, winter in nearby south west Utah offers two resorts, Eagle Point, which opened last season, and Brian Head. Both average around 350-450 inches of Utah powder annually, totals which equal big hitters such as Tignes, Whistler and Lech- Zurs. Unlike these mega-resorts, Brian Head and Eagle Point have genuinely dry Utah powder because they are sited more than 500 miles inland. This distance gives ample time for clouds to leave their snowfall with higher water Every Friday from late November to April, the tide of regional skiers and snowboarders sweep up Interstate 15.
That tide recedes again every Sunday content at locations nearer the coast. Moreover, these two Utah resorts are on latitudes similar to Sicily, so when it’s not snowing, there’s usually sun. What happens in Vegas, stays in Vegas®. I wouldn’t presume to suggest to Snow’s readers how they should make the most of a hedonistic stay in the Entertainment Capital of the World. But every hot, wild weekend needs a cool counterbalance. Here’s how you can combine a sandwich of scintillating Las Vegas with four or five winter weekdays in Utah, Sunday through to Thursday or Friday.

Travelling out from Britain on a Thursday or Friday gives a chance for two or three nights in Vegas at its liveliest. Hit the casinos, see a show, gawp at the winners and losers – I did the lot. By late Sunday morning it was time to hire a car and head north east, an easy drive along Interstate 15. Brian Head is just over three hours away and Eagle Point 40 minutes further north. For both resorts, the last few miles on the access road from the Interstate can be tricky. A four-wheel drive is an advantage and it’s a good idea to arrive before dark. Bear in mind that Utah is an hour ahead of Las Vegas, so an hour is lost going out but regained coming back when dashing for a flight or a Vegas show.

Leaving the Interstate at Parowan, the 12-mile drive up has spectacular red and white cliffs characteristic of southern Utah scenery. The resort has 65 runs spread across two mountains, Navajo and Brian Head Peaks. A lift and trail connection was established between the two five years ago. Jon, who gave me a tour, explained that almost half of their visitors come from Las Vegas with a similar wave from southern California. Every Friday from late November to April, the tide of regional skiers and snowboarders sweep up Interstate 15. That tide recedes again every Sunday.
The Navajo side is predominantly green and moderate blue runs. For a mixed party which includes fi rst timers, this is a great place to start out. The larger Giant Steps side under Brian Head Peak has a mixture of blue and single black pistes. The only double black terrain is back country, accessible when the gates are open. The premier hotel is the full service Grand Lodge which is not quite ski in ski out. Cheaper alternatives, at lower altitudes, can be found in Cedar City, 35 miles away, on the drive from Vegas. Near the Grand Lodge, Thunder Mountain Motorsports offer 90-minute and three-hour snowmobiling tours. The longer tour can be to viewpoints over the glorious natural amphitheatre of Cedar Breaks National Monument with its spectacular snow-tipped rock spires. 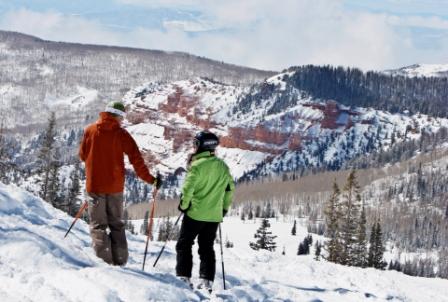 In terms of Utah’s lift-assisted skiing, Eagle Point is as remote as it gets. Midweek, this resort can be so quiet it makes Montana’s multi-millionaires’ Yellowstone Club look overcrowded. As soon as I arrived last January, I was invited to join the Chief Executive for dinner, not something which has ever happened to me on other assignments. Greg, who showed me round, leads the grooming team and also does some instructing. At one point we stood at the foot of the Monarch Triple chair looking up at six blue runs with no-one on them at all. Other than scooping the Euromillions lottery jackpot, this is the nearest you will ever come to owning your own private ski mountain.
The trails are graded into sectors so that all the runs, bar one off the Little Eagle and Skyline Chairs, are graded green. Monarch Triple Chair is blue territory with a blue connector down to the Lookout Quad Chair which serves ten single blacks and a couple of blues. Early in the afternoon, the liftie told me there were 12 of us on these 12 runs, a perfect ratio of perfect terrain. For explorations into powder, Greg’s team groom several of the blacks half-width.
Resort reservations offer midweek deals. In 2011 these included a one-bedroom condo with two lift tickets for $150 per night. Checking into mine I met a chatty long-time local who owns the condo further along the deck. My neighbour was completely relaxed about the resort re-opening and told me that the condo building was a hotel about 30 years ago. The resort originally opened as Mount Holly in 1972, changed its name to Elk Meadows and ran somewhat sporadically until 2002 before slumbering until its reincarnation as Eagle Point in December 2010.
Chief Executive Shane Gadbaw is a New York financier. I arrived promptly for dinner at the Outpost Grill, expecting to be businesslike, notebook at the ready. I was stunned to be shown to a table for 12. Shane had gathered together his family from all over the country for a long weekend and invited me to join them. This was a relaxed and delightful meal with a genuinely warm family. I managed to slip in several questions about the resort. Far from wanting to turn the place into a building site, he and his partners are planning to develop slowly and sensitively, creating a resort accessible to Utah locals and a Vegas-based market. They don’t see a hotel being feasible for four years. Visit whilst Eagle Point is still in this idyllic state. It is worth staying on the mountain in case of fresh snow overnight, but for those who prefer valley accommodation, Beaver on Interstate 15 has several motels. 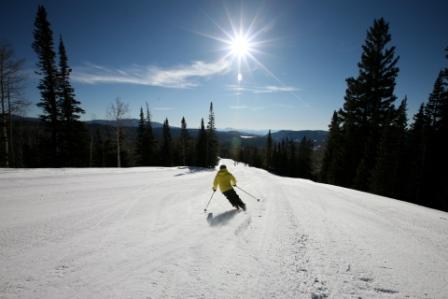 The Red Rock Golf Trail is another great year-round option for anyone in a group less enthusiastic about snowsports. This offers ten courses near the City of St George which is en route to and from Las Vegas. Times can be pre-booked and equipment hired locally. The lower elevations of Zion National Park are also accessible in winter.
Then it’s back to Vegas for a second hot weekend or flight home. And if you strike really lucky on the slots or tables (I didn’t), I guarantee that it’s the Utah part of your trip you’ll want to extend.

Las Vegas & Utah, USA
Getting to Las Vegas
Virgin Atlantic daily from Gatwick, plus Thursdays and Sundays from Manchester.
British Airways daily from Heathrow
Outbound 10 hrs 45 mins
Return 10 hours
Tour Operators
Lots of operators will offer packages of flights, nights in Vegas and car hire. The Utah accommodation can be booked independently. Ski Safari does longer trips combining skiing with Utah’s National Parks and may be able to help with part of the itinerary
www.skisafari.com
For car hire online bookings, be wary as some intermediate SUVs are not four-wheel drive.
Accommodation
Brian Head (higher end)
www.grandlodgebrianhead.com/
Eagle Point
on-mountain rentals are done via VRBO. See www. skieaglepoint.com website for midweek lodging special offers.
Motels in the Valley – mid range to economy: Cedar City – Abbey Inn, and Best Western Town & Country are good among 15 in town. Beaver has two Best Westerns and three other chain motels.
Acreage
Brian Head 640 acres,
Eagle Point 400 acres.
Vertical: Brian Head 1,320 feet, Eagle Point 1,400 feet.
Lifts: Brian Head 9, Eagle Point 5
Snowmaking
Not much call for it with this much snow and so few people. Brian Head has 34 per cent coverage.
Downtown
There isn’t one. Brian Head is the highest town in Utah at 9,600 feet. A few drinks in the bar is the extent of midweek nightlife at either resort. Brian Head’s Grand Lodge livens up at weekends often with a live band, but then prices and visitor numbers increase. These really are chill out resorts.
Mountain Munchies
The Skyline Lodge at Eagle Point is actually near the top of the mountain. It has the ticket office and car parking and also offers ski-in ski-out for a basic cafeteria lunch.
New for 2011-12
Brian Head is redesigning and renovating the base lodges which serve both mountains. Eagle Point is thinning out trees between the pistes in the black run sector to offer more powder skiing. They are also creating two new blue trails in this area.
Highlight
Almost your own private mountains midweek.
Bummer
Sleeping at altitude. If you find this difficult, stay in Cedar City for Brian Head and Beaver for Eagle Point.
Websites
www.brianhead.com
www.skieaglepoint.com