Italy’s most famous ski circuit is a must-ski of any trip to the Dolomites. But skiing A to A is just the beginning of a deeper exploration, discovers Roger Fulton.

Every winter around 674,000 skiers come to Italy’s Dolomites to do one thing – ski the Sellaronda.

At peak times (that’s Christmas and the February half-term weeks) up to 7,000 skiers a day jostle onto the 40km circuit from the various resorts that fringe it to ski round the spectacularly beautiful Sella massif in either direction, a rite of Italian passage that combines 26km of red and blue slopes and the rest on lifts.

But this is a Tuesday morning in mid-January and it’s a bit quieter. Our group is about to shuffle onto the Piz Boe lift in Corvara in Alta Badia at the north-east corner of the Sella and after the obligatory group photo, we’re off and running on the clockwise circuit, following the orange signage to ensure we make it onto the right combination of lifts and pistes to get us back over the Gardena pass by 3.30pm.

By the time we do, hopefully, catch the last lift back down to Corvara at the end of our journey – and avoid a pricey taxi ride - we will have skied through the four famous Ladin valleys - Alta Badia, Arabba, Val di Fassa and Val Gardena - and crossed over four mighty passes – Campolongo, Pordoi, Sella and Gardena. And always at the heart of our travels the rosy-tinged rock faces of this UNESCO World Heritage Site rise and fall before us.

A ski journey of discovery

On the surface, its appeal is obvious – racing from A back to A via a mix of motorway blues and whizzy reds in around three hours. One satisfying achievement. One more challenge ticked off. But as you go round, it’s clear that the real joy of the Sella is the sense of discovery as you climb up from one valley and descend into another, savouring the beautiful, changing scenery, and stopping at mountain restaurants where you could easily pass a few hours in a blur of good food, wine and the best coffee in the world.

You don’t need to pore over a piste map. Just follow the meticulously laid out signs – orange for clockwise, green for anti-clockwise - and let the circuit take care of the rest. The clockwise route is more popular – sportier and following the sun, it was skied by 351,000 skiers last winter while the green route was the choice of 323,000 (yes, inevitably, some of those were the same skiers doing the circuit in both directions, because that’s a thing, too).

It’s been attracting skiers for around six decades, but its very existence is a tribute to both nature – the Sella massif is a perfect hub for the circuit - and nurture. 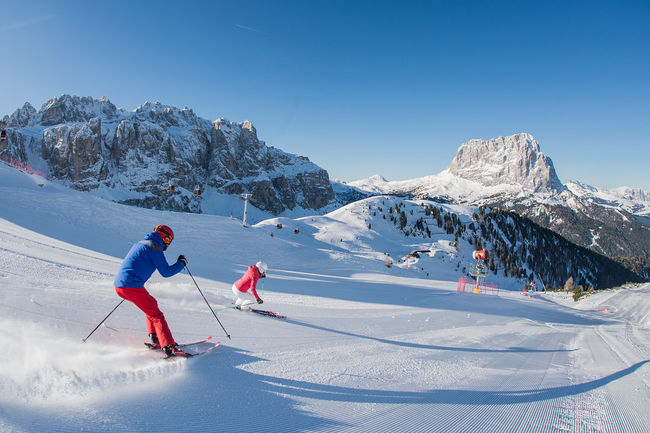 The Sellaronda is a triumph of individual will, political co-operation and technical expertise. It spans two Italian Regions (Trentino/Alto Adige and Veneto) and three provinces (Südtirol, Trentino, Belluno) and all of them have different laws, rules and ways of doing things – coordinating all of those wasn’t and isn’t easy to deal with, if you want to set up a single lift and ski-pass system.

Pioneers of the Sellaronda

Much of the political and technical graft was done by a handful of visionaries. In all four valleys there were private lift companies (some small, some bigger) who ran their own lifts. The growth of ski tourism led them to grow together, to form the Sellaronda system. There were pioneers in all the valleys who believed in the ski business and invested money, time and reputation – with huge success. Men such as Erich Kostner, a ski tourism trailblazer in Alta Badia, the son of a mountaineer and the man who installed the first chairlift in Italy, the Col Alto chair in Corvara, back in 1947; Gianni Marzola, a lawyer and famously generous ski lift impresario from Val Gardena, who owned the Comici rifugio, a popular meeting place for ski lovers who would enjoy the fresh fish he brought in from his Adriatic fish farm; Ugo de Battista, an engineer and innovator in winter tourism in Arabba; and Fiorenzo Perathoner, ski instructor and leading light of the ski industry in Val di Fassa. All these men were founders of Dolomiti Superski in 1974.

But the Sellaronda story is really one of evolution rather than a ‘big bang’ of creation. Back in the 1960s, long before it became ‘a thing’, people did cross from valley to valley. There were already lifts around the Sella massif, but in their original form they served just the customers of the single valley. It wasn’t necessary to reach the top of the passes with the lifts – most of which were draglifts. People could and did carry their skis, walk over the pass and ski down to the neighbouring valley. 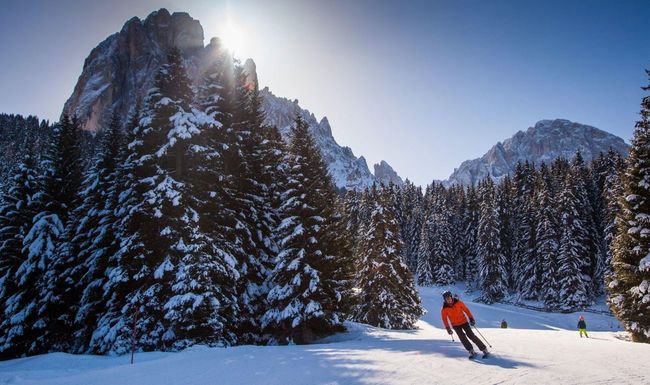 Diego Clara, PR chief at Dolomiti Superski explains: ‘The parts between Val di Fassa and Passo Sella, or around Arabba were not so developed, so people still had to take the public bus. And, as there wasn’t yet any common ski pass system, skiers had to pull out their wallet at every lift and pay cash – not very convenient. Gradually, as the demands of tourism grew and as the elder lifts were replaced with new and more powerful ones, the top stations were moved to the top of the passes, and so, step-by-step, it became possible to ski around the Sella massif without interruptions, except, that is, for the bits that were still filled in by public buses.

‘When the Dolomiti Superski ski pass system was founded in 1974, skiing around Sella became much easier and more convenient, and from the beginning of the 80s, the Sella Ronda was skiable in both directions. Since then, all the systems have been improved and developed each year.’

Indeed, evidence of this constant tweaking is not hard to find. Our first runs, down to Arabba, now bypass the restaurant where we grabbed a cup of coffee the last time I was here, a few years ago. And at the Pordoi pass the clockwise route now misses out the very top of the run down from the top station as that piste was considered too dangerous. There are still pinch points though – crossing town in Selva still means clumping over a footbridge, for example – but the route does include several less crowded ‘variations’ for different stretches.

By the time we had a late lunch on the approach to Selva, the clock was ticking. With the January sun setting early and the light fading, we needed to get our skates on to cross from Gardena back into Alta Badia. Luckily, we had a Plan B. Reach Colfosco by 3.30pm and we could catch a bus back to our hotel in Badia, skipping the last lift leg back to Corvara from where we’d never ski across the Badia plateau to our hotel base before the lifts closed. So it proved. Completists might recoil from this plan, but, hey, we’d skied it before anyway.

One last thing: the Sellaronda is the undoubted centrepiece of a visit to the Dolomites. But ticking off the circuit itself is not necessarily the highlight. The often-overlooked joy of the Sella is that it opens up deeper exploration into all the valleys it passes through. You might ski the circuit one day, but the rest of the time you’re here you can use parts of the Sella route to explore the areas it borders.

Five Reasons to Book a Package Ski Holiday this Winter