Sarah Coad discovers that it takes more than a whiteout to put a dampener on the joy of skiing in snow-blessed Tignes.

The sky is turning opaque with snow as the Palafour chairlift climbs gradually upwards. I soak in the steady silence and take a breath of the freezing air. It feels like it’s just me and the mountain.

I’m in Tignes with a mixed group ranging from Ed, a complete beginner experiencing a ski resort for the first time, to seasoned snowboarder Pete, who is eyeing up a bit of backcountry splitboarding. It’s the first week of the season when we arrive in the mountains, but instead of just a sprinkling of early snow, Tignes is dealing with an insane snow storm. Lifts are closed. Cars are totally buried in snow in the car parks, perplexed owners wandering around pressing their keys in a vain hope of finding their vehicles. Snowfall is relentless, vision is basically nil. Between us we’ve worked 15 winter seasons, and none of us have ever seen anything like this – we estimate that two metres of the white stuff has fallen in the last few days.

Ed asks, to roaring laughter: “Are ski resorts always like this?”

Luckily one thing goes right on our first day - we pitch up at the new and beautifully situated Hotel Tignes 2100, smack bang in the middle of Tignes Le Lac. The hotel is modern and spacious, with a couple of welcoming bar and lounge areas where log fires crackle, a large restaurant famed for its pizzas and cosy bedrooms with futuristic glass-walled bathrooms. The perfect port in a storm.The next day we sit at breakfast straining to see the mountains through a steadily shrinking gap in the clouds. For now, the lifts are still running, so we suit up and head out. 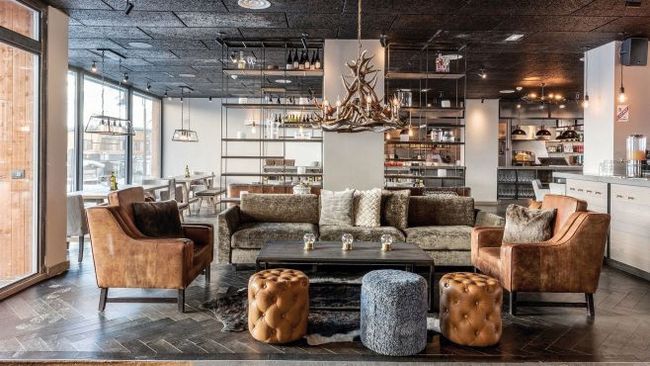 Jim, my ski (in his case, board) companion for the day and I get off the chair and head in the direction we think leads to the piste. Before I know it, I’m barrelling down the mountain at an unknown speed, unable to see more than two feet in front of my skis, never mind make out the markers lining the pistes.

I’ve lost Jim somewhere in the whiteout, and even the sound of his board scraping across the snow has faded, so I just point my skis downhill and hope for the best. Time, we decide, to go to the pub.

That evening, after a quick dinner in the hotel, we hop on a bus and head through the blizzard to the village of Val Claret, just across the lake from Le Lac. We spend the evening chatting to our fellow skiers about the weather, regularly standing in the doorway shaking our heads at the sheer volume that’s fallen since we holed up in the bar, and hoping for good conditions in the morning.

And boy, does Tignes deliver. The morning dawns bluebird clear, letting us see the panoramic views of the surrounding mountain peaks for the first time. The conditions are what snow dreams are made of. The huge dump has made the resort a paradise for powder hounds – pristine snow metres deep lies waiting under bright blue skies. Plus, as it’s still early in the season, Tignes is wonderfully quiet. The avalanche risk today is at its maximum rating of five so, sensibly, we decide to pick our lines carefully and stay fairly close to lifts and pistes where there are more than enough tracks to go round. Despite this, we see five avalanches exploding down the mountains near to the slopes during the course of the day. 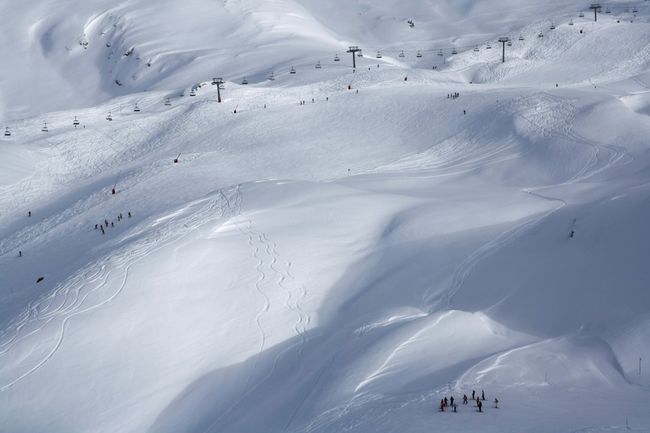 Mike and Pete head off into the backcountry on a guided trip with Action Outdoors to test out their splitboards in the relative safety of the forest, while Ed is off to find his ski legs in ski school. I jump straight on the Toviere gondola and sit back to enjoy the view of skiers on the snow below me zipping through the powder in graceful arcs.

Breathtaking scenery, sunshine bouncing off the perfect snow and a pair of skis on my feet. The perfect morning. Mother nature isn’t finished with us yet, though - the sky starts to churn with cloud and the heavens open, blanketing everything in sight once more.

Ed doesn’t care what the weather does - he turns out to love skiing so much he gets spotted on the tourist board webcam come nightfall, still walking up the slopes next to the now-silent lift so he can practise his skills.

That evening we reconvene with the group (once Ed has been prised away from the pistes) and find out that the day wasn’t quite such smooth sailing for everyone. Pete and Mike’s splitboarding adventure ended up with them stranded in next door Val d’Isère with their guide, Pascal, for several hours after the lifts and roads were forced to close under the deluge of snow. 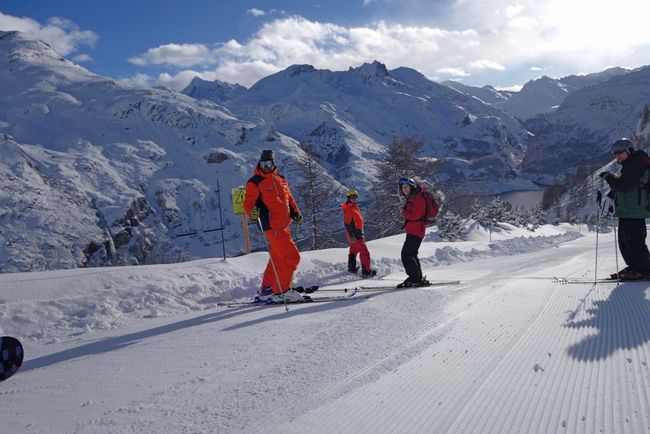 We experience some truly epic weather in our final few days; an unbroken snowfall which adds to the wonderful Christmassy atmosphere pervading Tignes, and reminds me of why I love winter so much. On the journey home we look out of the window of the bus at the inviting, ever deepening drifts of powder, wishing we had just a little more time in Tignes.

We stayed at the Hotel Tignes 2100, a smart, modern hotel just a couple of minutes walk from the bottom of the Palafour chairlift.

Crystal offer a week-long holiday there on a half-board basis from £639 per person.

Ski pass - A week-long lift pass for Espace Killy (including access to Tignes and Val d’Isère) costs £303 for adults.