The French ski resort of La Rosière is ideal for those who enjoy the frisson of cross-border skiing. So from the La Rosière ski map to the best ski schools, ski hire shops and après ski bars, here’s the lowdown on this popular family destination.

Sponsored by the family ski experts at Esprit Ski

La Rosiere ski resort forms the French half of the cross-border Espace San Bernardo ski area, linked with the Italian ski resort of La Thuile. Quieter and generally less expensive than the nearby super-resorts of France's Tarentaise Valley, La Rosiere is ideal for families and improving intermediates.

Dubbed 'The Balcony Of The Tarentaise', La Rosiere occupies a commanding high-altitude position on the sunny south-facing northern flank of the upper Tarentaise Valley, looking directly across to the resorts of Les Arcs and Villaroger that lie in the Paradiski area on the opposite far side of this famous snowsports-rich valley.

La Rosiere village sits close to the Petit St Bernard pass, a high road link between France and Italy, just 23km from the main valley town and transport hub of Bourg-Saint-Maurice, and is just about the highest point reachable by road in winter when the pass is closed because of the heavy snowfalls that this area regularly receives thanks in part to its proximity to Mont Blanc.

The combined area of trans-national Espace San Bernardo ski domain offers a great mix of prime novice and intermediate terrain and the novelty of cross-border pistes, with the complementary charms of French and Italian characteristics.

La Rosiere has the benefit of being sited on the sunnier yet still snow-sure southern side of the domain, and is a warmly welcoming, family-friendly, good-value alternative to the bigger, brasher, more crowded and more expensive nearby mega-resorts of the Tarentaise.

La Rosiere's primary Front de Neige base area and main access ski lifts are located at the upper western end of the village; a secondary base area with access lifts is sited at Les Eucherts. There are good beginners' zones in both sectors, whilst the interlinked slopes directly above offer almost perfect blue-grade progression routes for novices and straightforward cruise-able home runs for everyone. 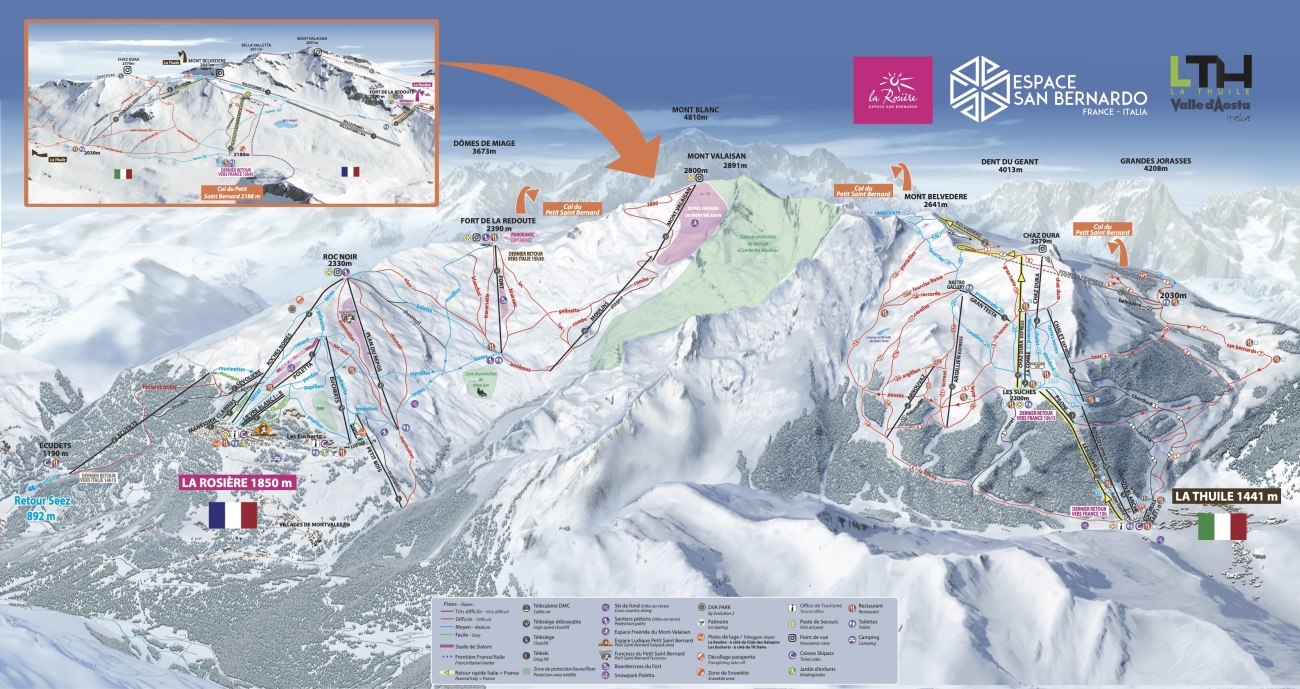 There are tougher intermediate-level descents deeper into the valley from both home sectors, the runs cutting through the forest towards Seez from above the western end of the resort are particularly inviting and offer the only substantial tree-lined slopes in the area.

The majority of the ski area lies above the tree line, on the wide and open slopes directly above the village, stretching up to the north along the lengthy spine of a ridge that runs down from the border with Italy. The eastern flank of this ridge is the core of La Rosiere's ski area, with a series of parallel-running lifts serving good fall-line reds down into the Combe des Moulins, with plenty of inter-piste powder possibilities too, great for improving intermediates.

Blue traverses across these slopes also provide links to and from the sole cross-domain link via the Col de la Traversette, site of a historic ruined fort (La Redoute Ruinée), at the northern mid-point of the ridge, beyond which lies the high-altitude and often windswept Petit St Bernard pass that marks the French-Italian border, crossed by lengthy blue-equivalent stretches that offer spectacular views of Mont Blanc.

As well as its gentle pistes on the La Rosière side, since December 2018 more confident intermediates have been enjoying one new black and six new red pistes in the Mont Valaisan sector, served by two new 6-seater detachable chairlifts:  The Moulins and  The Mont Valaisan, with access to the ski area’s new highest peak of 2,800m. This recent expansion completed the choice on offer for the more athletic skiers, on the north-facing Aoste Valley side, creating a more technical ski area with more freeride possibilities.

A good slopestyle snowpark sits directly above La Rosiere village; another is available over in the neighbouring La Thuile ski area.

Attractions for advanced visitors include heli-skiing/boarding, which although prohibited on French territory is possible here because drop-offs can be made on the peaks on the Italian side of the border; The Zittieux snow cross is a non-groomed but secured off-piste area which offers competent skiers an in-bounds introduction to the feeling of freedom that you get when heading off-piste; plus a designated kite-skiing zone on the Petit St Bernard pass. Fresh snowfall also means plenty of inter-piste powder terrain to play in.

Every Tuesday during the winter season, a ski touring taster session is organised and the resort has created three new  ski touring trails (Stoat’s Trail, Serge’s Trail, Roc Trail) to give people somewhere to try out the discipline or train, with the aim of making users aware of the safety advice and risks involved in ski touring.

La Rosiere is an attractive small Savoyard village with two distinct residential zones, around one kilometre apart: the original main village straddles the road that leads to the Petit St Bernard pass, whilst the newer Les Eucherts suburb is tucked away beyond the woods to the east. A shuttle-bus service runs between them, there's also a romantic lamplit path connecting them through the woods.

The main commercial heart of the resort remains in the old village centre of La Rosiere, offering a fair selection of small shops and an adequate choice of unpretentious good-value restaurants; there are also a couple of shops and a restaurant at Les Eucherts, together with an ice rink and a tenpin bowling alley. La Rosiere's other facilities include a cinema, a fitness centre, plus a couple of spas, one of which offers a Japanese-style onsen bath experience.

There are also loads of off-slope activities to try here, such as Yooner (sledging on a mono-ski), Paret (traditional sledging) and Snake Gliss (sledging convoy), rail sledding, ice skating, and paintball, so you'll never be bored!

Apres ski and nightlife are generally quite low key, with just a handful of bars in the central part of the village plus a couple out in the suburb of Les Eucherts, but there are a couple of fairly lively venues amongst these, including La Roz.

There are multiple outlets for ski hire in La Rosiere, including Skiset, Ski Republic, and La Trace.

As with most ski resorts in France, learning to ski is dominated by the ESF, but other ski schools include Evolution 2 and, for the especially adventurous, Origin Alps. there are also many freelance ski instructors who can help you with everything from first turns to exploring off-piste.