An enigmatic Italian resort with a French-sounding name, La Thuile shares a cross-border ski area with La Rosière. From the La Thuile piste map to the best ski hire and après ski bars, here is the lowdown on skiing in La Thuile.

La Thuile ski resort is located in a quiet side valley off the major Aosta Valley in northwest Italy. Its ski area - the Espace San Bernardo - is shared with the French Tarentaise resort of La Rosière, offering the novelty of cross-border slopes, and heli-skiing from the Italian side, with routes into France.

La Thuile doesn't have the high international profile of its near neighbour Courmayeur, but that cuts both ways - it might not have the same off-slope attractions, but it rustic, traditional ex-mining community has a certain charm that more famous resorts can't match.

There's been some serious development in recent years, but this hasn't affected the authentic character of the place, and it makes an interesting destination for skiers and snowboarders looking for something a little bit different, yet within easy reach of the principal gateway airports and motorway links of the Western European Alps.

Since La Thuile is also a member of the Aosta Valley resorts association, its full area lift pass also grants access to the slopes of Courmayeur. Just 15km to the north, its connected to La Thuile by a free bus service.

The 152km of the Espace San Bernardo offer something for all abilities - though the shares are not exactly equal, as the slopes on the Italian side of the Espace are generally steeper than those on the French side.

La Thuile's ski area lies to the south-west of the village, on a high snow-sure expanse of ridges, cols, and plateaux. The densely forested slopes directly above the compact base area, are among the steepest in the whole lift-linked area, but they always hold snow well, and you don't have too worry as much about icy moguls or chopped up snow conditions as you do in other resorts with similar layouts.

The main uplift is via gondola and a fast chairlift. The gondola also provides the download route for novices and early intermediates for whom the lowest sector slopes are too challenging. The main home-runs here are fall-line black runs, which deserve their classification. There are however two red home runs too, which are manageable by most average intermediates when conditions are favourable.

Beginners are well catered for in the base area itself, with separate nursery slopes off to the side of the main pistes. There's also a beginners' zone in the area at the top of the gondola, at Les Sucres. Immediately above Les Sucres there's a range of open blue pistes, ideal for progressing novices. As a rule, however, La Thuile is a bit short on cruisey blues; above these the terrain becomes more testing and more exposed, particularly on the flanks of the peaks of Chaz Dura, Touriasse, and Belvedere. For intermediates upwards however, this sector is fantastic.

On the French side, the majority of the slopes in La Rosière are gentler and sunnier. Long drag lifts are unavoidable as you make your way up to the Col de la Traversette and the link across the border, but the jaunt is worth it. La Rosière adds variety and scale the La Thuile ski area, plus you can enjoy the novelty of transnational skiing.

The principal return route to La Thuile involves a lengthy traverse over wide open ground, which is particularly tedious for snowboarders. If the gentle gradient isn't off-putting though, then the 11km-long red piste number 7 is good fun. It runs all the way back to La Thuile village, along a piste which covers the road over the Piccolo San Bernardo (Petit St Bernard) pass in the summer- complete with piste-side road signs.

Advanced skiers and snowboarders should note that La Thuile is a popular heli-skiing destination: key drop-off points are Mont Miravidi (3,058m), which gives phenomenal views of Mont Blanc, and the Rutor Glacier, that offers routes into France. If you've not got the money for a heli-day, there are some good touring itineraries too, but this doesn't have the same gnarly high-alpine terrain you'd find in Courmayeur, for example. 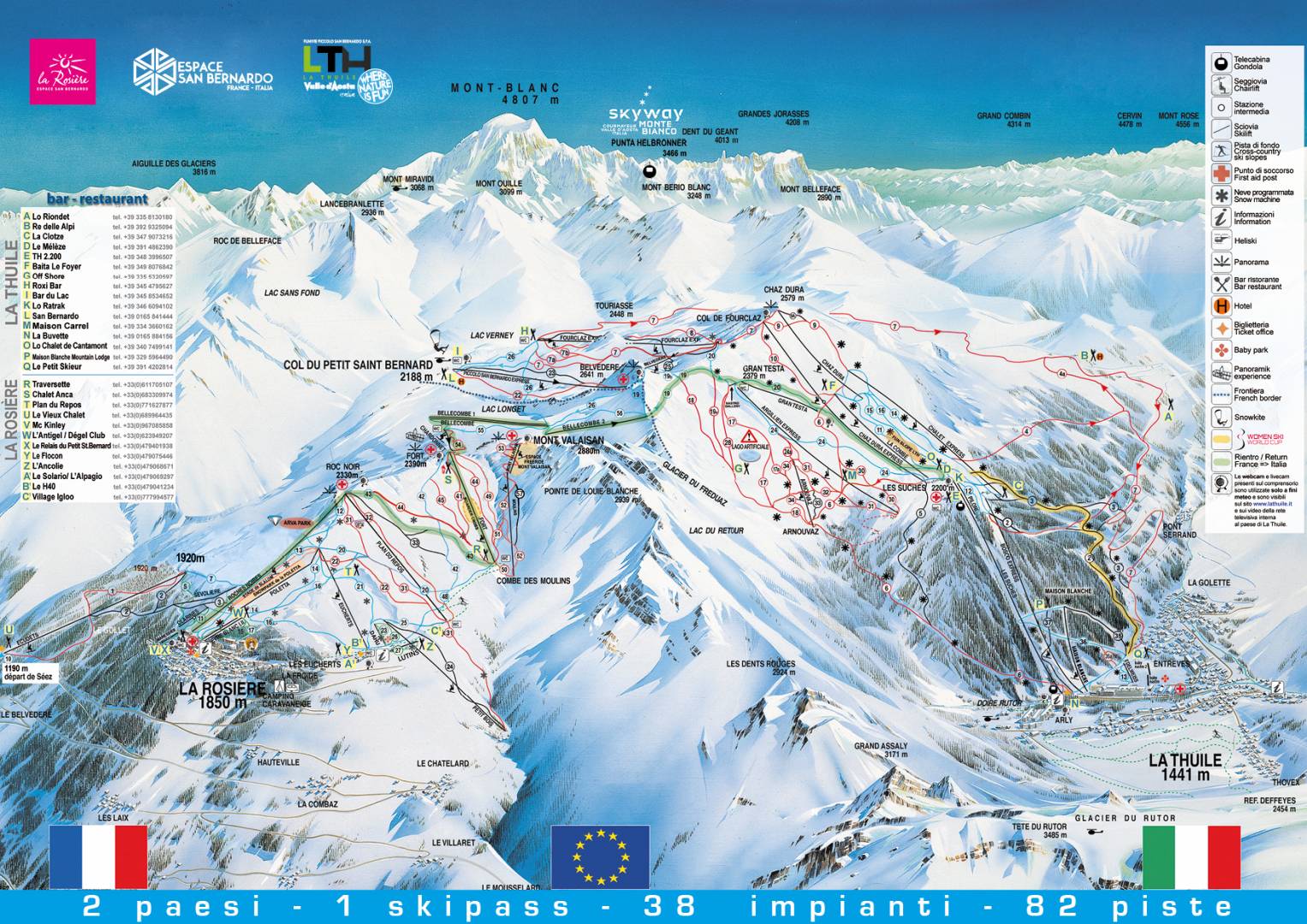 In 2018-19, two new fast six-man chairlifts were opened up on Mont Valaisan in La Rosiere to create a new area of off-piste, as well as five new red runs.

In La Thuile, there is also a snowkiting zone at Colle del Piccolo San Bernardo (2,188 m). It covers a wide area and is lift-accessed. You get stunning views of the Mont Blanc range, and plenty of uplift.

The heart of La Thuile village, in the streets around the mayor's office at the riverside junction between the Bathieu and Entreves quarters, has a pleasantly quiet and traditional ambiance and contains a decent selection of local shops, cafés, and restaurants.

The big Planibel complex at the base of the slopes is a main focal point of the resort. The sports centre at the Planibel has a swimming pool, sauna, fitness suite, squash courts, and a climbing wall. La Thuile's other activity facilities include a small sledging hill and an ice skating rink. There are also a number of way-marked walks, and guided snowshoe treks are available. Dog-sled tours and mushing lessons are a popular local excursion.

Après ski isn't really a feature of La Thuile - there is a lively base-area bar (the Roxy) at the Planibel complex, but many visitors seem content to catch the ski bus back to their accommodation to relax and freshen up before dinner. There are about two dozen restaurants and bars dotted around the resort: the traditional Italian staples of pasta and pizza predominate on their menus, although there are a handful of more refined establishments.

Most of the bars are quite laid-back and quiet, but the Cage Aux Folles is popular with a livelier crowd.

The La Thuile ski school, which, in January 2014 celebrated its 50th birthday, has one branch in the town, and one further up the slopes at Les Suches.