Known as 'Little Tibet', Livigno is a high-altitude, remote ski resort in Italy's Lombardy region. From the Livigno piste map to the best ski hire and apres-ski bars, here is the lowdown on skiing in Livigno.

Livigno ski resort is located in a duty-free enclave, close to the Swiss border. Generally promoted as an ideal destination for beginners, Livigno is also a good choice for intermediate skiers and snowboarders, particularly for those on a budget and those who enjoy lively apres ski.

Livigno is colloquially known as 'Picccolo Tibet' (Little Tibet) because it's tucked away in such a high and remote area between the Engadine and the Upper Valtellina,

The mostly treeless and often cloud-shrouded mountainous surroundings here do indeed create the impression that this is a world apart, an impression reinforced by the fact that this once isolated region still retains its own tax and customs regulations, separate from the rest of Italy; the upper Spol Valley in which Livigno is located, has duty-free status, and the great value shopping here is as big an attraction as the skiing is for many visitors. One notable downside, however, is the long transfer time from the nearest regional transport links and airports.

The village of Livigno is actually a community of three original hamlets: Santa Maria, San Antonio, and San Rocco; these have now merged to form a linear-shaped resort village that stretches for around 4km along the flat valley floor, with ski areas on either side.

This layout does mean that it's a long walk from one end of the resort to the other, so it's important to choose your accommodation carefully in order not to be too far from the ski lifts or amenities; the village is served by a free ski bus service, but it's not very regular and finishes early in the evening.

The main ski school meeting points and beginners' slopes are on the western side, mostly around the central San Antonio quarter; further novice slopes are located in the southernmost San Rocco quarter, close to the base terminal of the access gondola for the Carosello 3000 ski sector; the Santa Maria quarter at the northern end of the resort also has a cluster of easy slopes and ski lifts, including gondola access to the linked Costaccia ski sector.

On the eastern side of the valley lies the Mottolino ski area, accessed by ski lifts based in the separate suburb of Teola. Day trips away to ski at Bormio, also in Italy, or even St Moritz, over in Switzerland, are also possible.

There are two separate ski areas at Livigno, one on either side of the valley: the bigger of the two is Costaccia-Carosello 3000, whose gentle base-area slopes spread out along almost the entire western edge of the resort. The other is the Mottolino area to the east, but it's a ski-bus journey - or a tedious walk - away from the slopes of the former area. 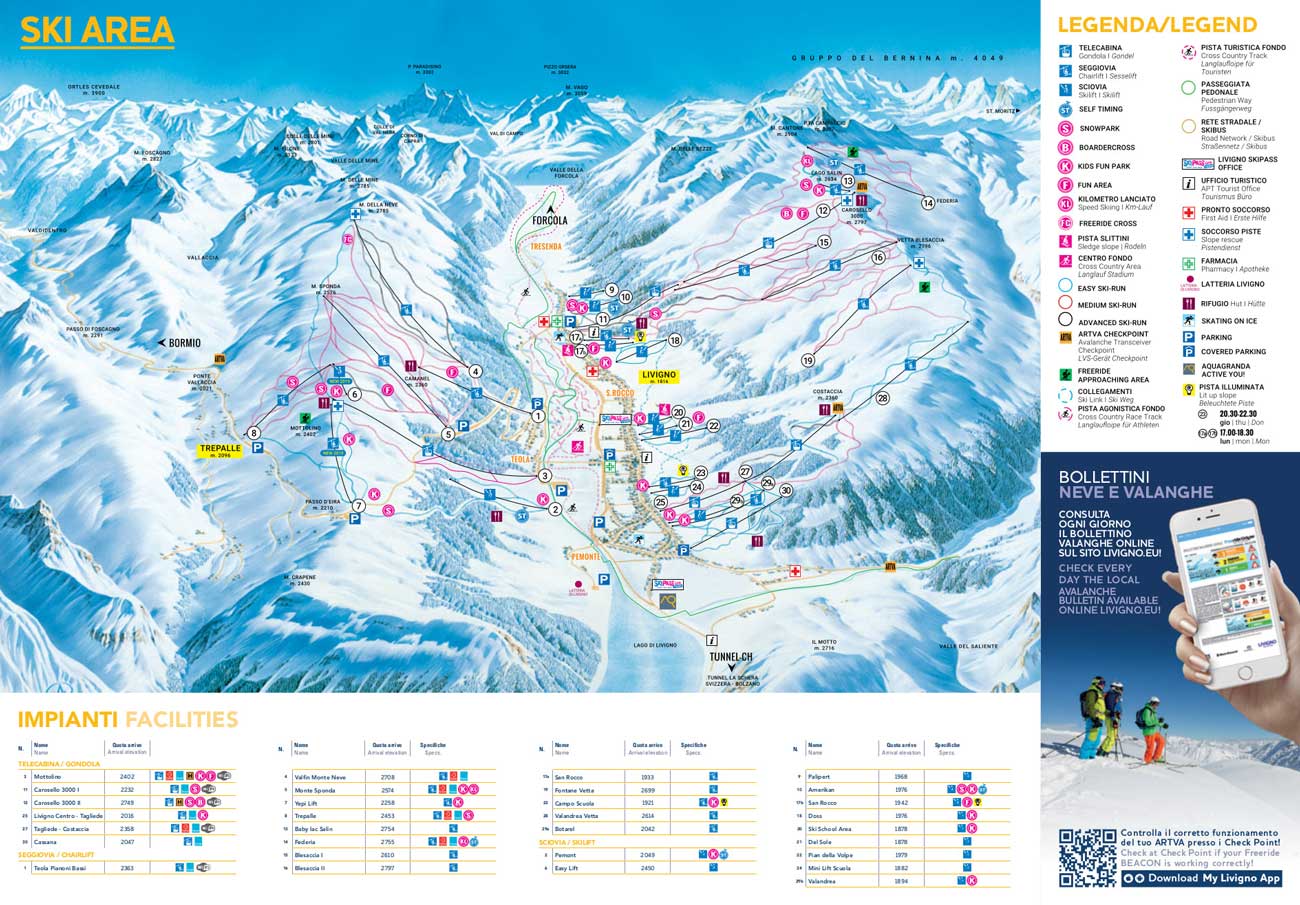 The Costaccia and Carorsello 3000 sectors are linked at altitude along the ridge that separates Livigno from the neighbouring Federia Valley. Mirroring the linear nature of the village the layout of the link also follows a narrow arrangement, with a long blue piste that cruises counter to the line of the fast chairlift that provides the key uplift connection.

Skiing Livigno works for all levels. The majority of the pistes are mid-range reds, with a couple of short black runs providing a slightly more testing workout for progressing intermediates; the pick of the runs are the long descents from the Carosello sector down to the base area at San Rocco.

On the opposite side of the valley, the Mottolino ski area again covers a ridge which mirrors the linear layout of the resort below, but with the added dimension of slopes down to the linked hamlet of Trepalle in the next valley. From the highest point, on Monte Della Neve, there's a continuous route that runs north all the way to the opposite end of the ridge and then down to the base area at Teola, a long and scenic excursion manageable by competent novices.

The toughest slopes are the cluster of fair black runs off Monte Della Neve that take the fall line down the side of the valley towards Teola. All other slopes are enjoyable mid-range reds. The snowpark at Mottolino, on the slopes above Trepalle, is the biggest of three at Livigno, and offers two halfpipes, a good range of rails and boxes, plus some monstrous kickers and jumps.

This main terrain park has hosted many international competitions, and provides the winter training base for the GB Park & Pipe Freestyle team - it was here that Billy Morgan and Izzy Atkin perfected their tricks before winning Bronze medals in snowboarding and freestyle skiing, respectively, at the 2018 Winter Olympics. Livigno is also set to host the freestyle and snowboarding events when the Winter Olympics come to Cortina in 2026.

The area around Livigno and the Alta Valtellina valley offers some superb freeride opportunities. However, although there are plenty of open powder slopes and freeriding possibilities within and surrounding both ski areas, off-piste riding is only permitted in certain areas on the Mottolino side, and only when accompanied by a local guide.

This is an especially popular area for heliskiing however, and backcountry tours are organised for everything from one day tasters at €295 per person (based on four people going) to six-day excursions.

Every Sunday from 6-7.30pm Livigno organises safety talks at the Birrificio (brewery), where freeride experts go through rules, and talk about how to use essential backcountry equipment, including transceiver, probe and shovel.

The most obvious non-ski attraction of Livigno is the duty-free shopping: with great bargains to be had on cameras and clothing as well as the obvious things like alcohol and tobacco.

For a bit of pampering and relaxation away from the shops and the slopes, try the Aquagranda spa up near the lake beyond the northern end of Livigno. This stylish complex houses various pools, aqua-leisure and hydro-massage features, a fitness suite, and a beauty spa.

More active alternatives include an ice skating rink in the San Rocco quarter of Livigno, snowmobiling, or driving / skidding around an ice-circuit in cars, go-karts, or on quad bikes.

Livigno is renowned for having a lively après ski scene, although it's really the later nightlife that's liveliest. The actual close-of-lifts après ski is mostly confined to a handful of animated bars by the base terminals of the main lifts. Amongst the liveliest of these are is the Stalet on the Carosello side. The Ice [umbrella] Bar at the Hotel Concordia, on the central base-area slopes, is also popular for its Austrian-style après ski party atmosphere.

Because the resort is strung out along the valley it lacks central focus, many of the best venues are dotted around the village and are some distance apart, so the overall ambiance is therefore muted, but there are indeed numerous good pubs, lively bars, and some decent clubs.

Daphne's Pub is the key venue at the southern end of the village. The Helvetia and the Kuhstall are two good lively bars just a few steps apart in the central quarter, the latter particularly popular for its live music sessions. Quite a few bars also feature small dancefloor areas, but the fair-sized Kokod nightclub is the resort's only real late-night club.

Despite the resort's duty-free status, prices in the local bars and restaurants are not noticeably cheaper than in any other Italian resorts - but that still makes them considerably cheaper than France or Switzerland.

There are plenty of options for ski and snowboard hire in Livigno, including Skialo, David's Rental Ski and Bike, Ski Rent Zini and Arcobaleno.