Sestriere in Italy is the highest ski resort in the extensive Milky Way ski area. From the Sestriere piste map to the best ski hire and après ski bars, here is your guide to skiing in Sestriere.

Part of the Via Lattea (Milky Way), which straddles the Italian-French border, and stretches across 400km of lift-linked pistes, Sestriere, Italy, was one of the world's very first purpose-designed ski resorts. Founded in 1930, and largely financed by Giovanni Agnelli, the then-head of the Fiat industrial empire, its the embodiment of his vision to build a world-class ski resort within easy reach of his home city of Turin.

In its heyday, prior to WW2, it became one of Europe's most fashionable resorts, welcoming royalty, Hollywood movie stars, and other celebrities of that era. It also hosted historically significant ski races, including the famous Kandahar Trophy races, founded by the winter-sports pioneers Sir Arnold Lunn and Hannes Schneider. It's still features one of the classic fixtures on the annual FIS Alpine World Cup tour.

When Turin was selected as the host city for the 2006 Winter Olympics, Sestriere was chosen to stage the blue-ribband downhill events: the resort's ski lifts network was upgraded, snowmaking capacity was increased, new accommodation was constructed, and existing facilities were given a makeover. This heralded something of a renaissance for Sestriere, placed it once again under the spotlight on the world stage.

Sestriere is still arguably this region's most upmarket resort. It is also the most reliably snow-sure of all the resorts in the Milky Way, and it presents the strongest all-round choice for beginners and keen intermediates planning to visit this easily accessible and interesting corner of Italy.

Sestriere's local ski area has two distinct linked sectors: Monte Sises, directly overlooking the town, and Monte Motta above the linked village of Borgata to the east. The spacious snowfields at the foot of Monte Sises, closest to the resort centre, are mostly designated as beginners' zones and are served by a number of short drag lifts, which facilitate cross-slope traverses from one end of the town to the other. 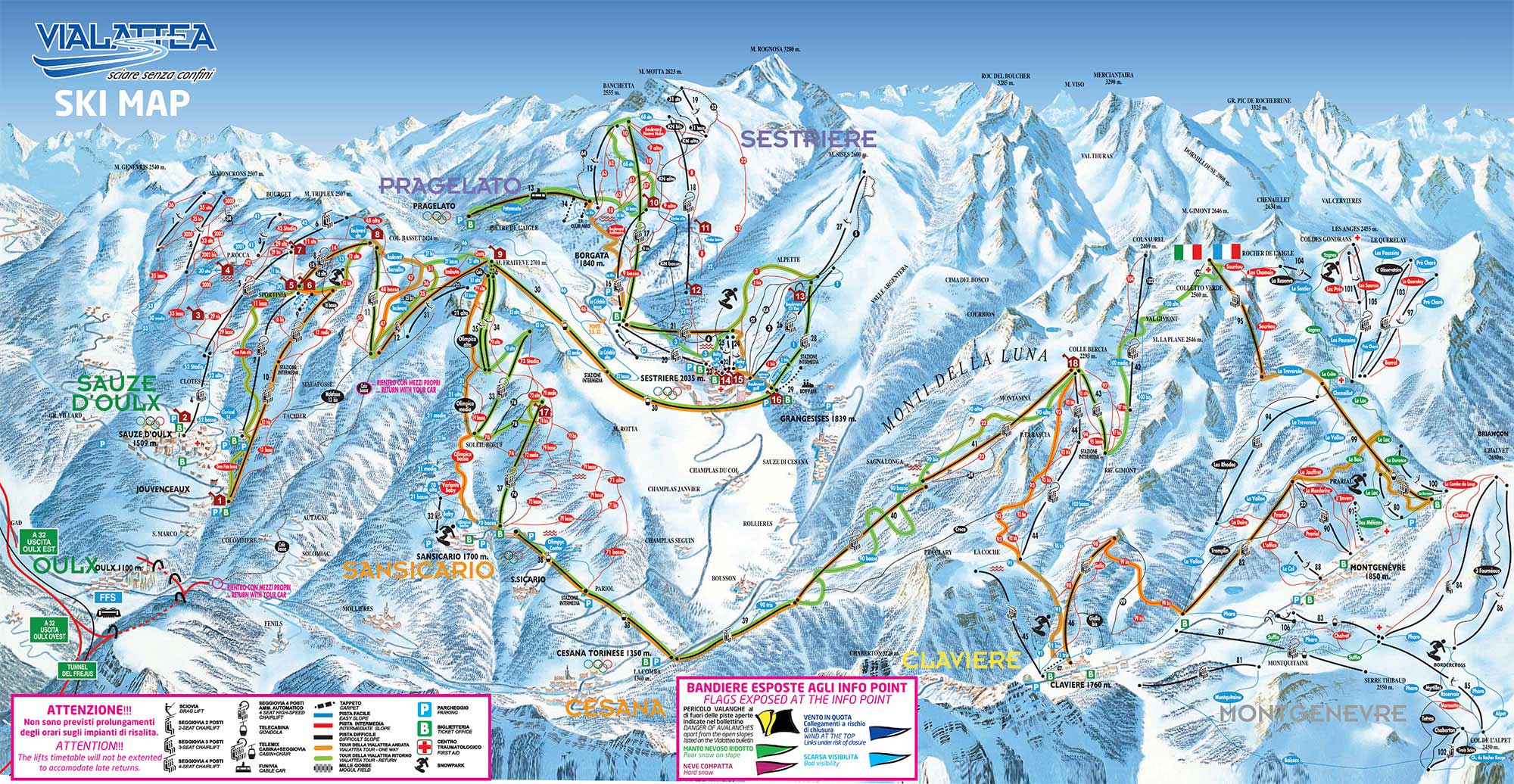 The upper slopes of Monte Sises house a small snowpark and a selection of wide red and black runs, including the floodlit World Cup & Olympic Slalom piste, sweeping down to the edge of the town. At the western end of this area is the base terminal for a principal link gondola, which runs high above the rooftops of Sestriere to the summit of Monte Fraiteve on the opposite side of the col. This links the ski areas of Sansicario and Sauze d'Oulx, and takes you towards links towards Claviere and Montgenevre.

Borgata and the Monte Motta sector can be reached from Sestriere by a choice of blue or red pistes, with chairlifts providing the links in the opposite direction. The upper reaches of Monte Motta houses Sestriere's most extensive ski area, predominately red-graded; this sector also has a number of long red and black summit-to-valley descents, among them the historic 'Kandahar Banchetta' World Cup & Olympic Downhill course.

Both sectors are served by a fair selection of reasonably atmospheric on-mountain restaurants, but the town is close enough to make finding a lunch spot quite easy.

Deep powder is not a staple of Sestriere skiing, but there's plenty of sidecountry, inter-piste terrain to play in. There are some runs through the trees from both Monte Sises and Monte Motta, and the trees are generally less dense than in many resorts. Other parts of the Milky Way, accessible on the wider area liftpass, offer more tempting terrain however. If you're a dedicated powder hound, you're probably better off heading for the area around Claviere and Montgenevre.

As you might expect of a resort that has hosted a relatively recent Winter Olympic Games, Sestriere's sports facilities are rather good. There's an open-air ice rink, heated outdoor swimming pools and a well-equipped fitness club, plus indoor tennis & squash courts at a big municipal multi-sports centre. Nevertheless, Sestriere's off-slope attractions are really still rather limited - its slopes and its proximity to Turin are its principal assets.

The village does a fair selection of shops and cafés, and several nice restaurants, however. There are also a handful of pleasant bars, and even two small nightclubs, but weekday evenings are normally very low-key. When Friday comes, everything steps up a gear: day-trippers and weekenders from Turin pour into the resort, livening up the bars and the clubs on Friday and Saturday night and thronging the slopes, the streets and  cafés on Saturday through until late Sunday afternoon.

The most popular early après ski bars are Pinky's and Du Col.  The former is also a great pizzeria, so it's no surprise that many people stay put here for the evening once they're comfortable. Later on, the Irish Igloo and Al Kovo are the hotspots, followed by the Tabata nightclub, particularly at the weekends.

When it comes to ski schools in Sestriere, Sestriere Online offer ski lessons, or you can opt for the excellent Scuola Sci Vialattea.