With 7 ski areas, 78 ski lifts, about 200km of runs and 151 slopes for skiers of all abilities, the Val di Fassa in the Italian Dolomites is a superb resort area in its own right, as well as being one of the spokes on the wheel that is the Sella Ronda circuit - the centrepiece of the Dolomiti Superski region. As such the Val di Fassa has brilliant access to all the other spokes, such as Val Gardena and Arabba, making it a marvellous base for an Italian ski holiday.

The Fassa valley, flanked by steeply wooded slopes, fans out from the Sella Massif, through a string of pretty villages, from Penia and Alba at one end through Canazei, Campitello di Fassa, Pozza di Fassa, Vigo di Fassa and Moena and Carezza at the far end, plus the offshoot Passo San Pellegrino. Val di Fassa is also the home of the Ladin community in Trentino, which make up the majority of the population.

The Fassa Valley's skiing truly does have something for everyone with a wide choice of friendly, intimate ski areas for all standards. All have excellent snowmaking cover and most have modern lifts. For example, the Catinaccio ski area above Vigo di Fassa had a new quad chair with bubble cover installed on the Pian Pecei-Pra Martin. It does not always follow that the larger ski areas have access to the tougher skiing, as one of the smaller sections above Alba has a third of its 15 km graded black and includes one of the region's toughest runs, the 3 km long Pista Ciampac with a 658m vertical. 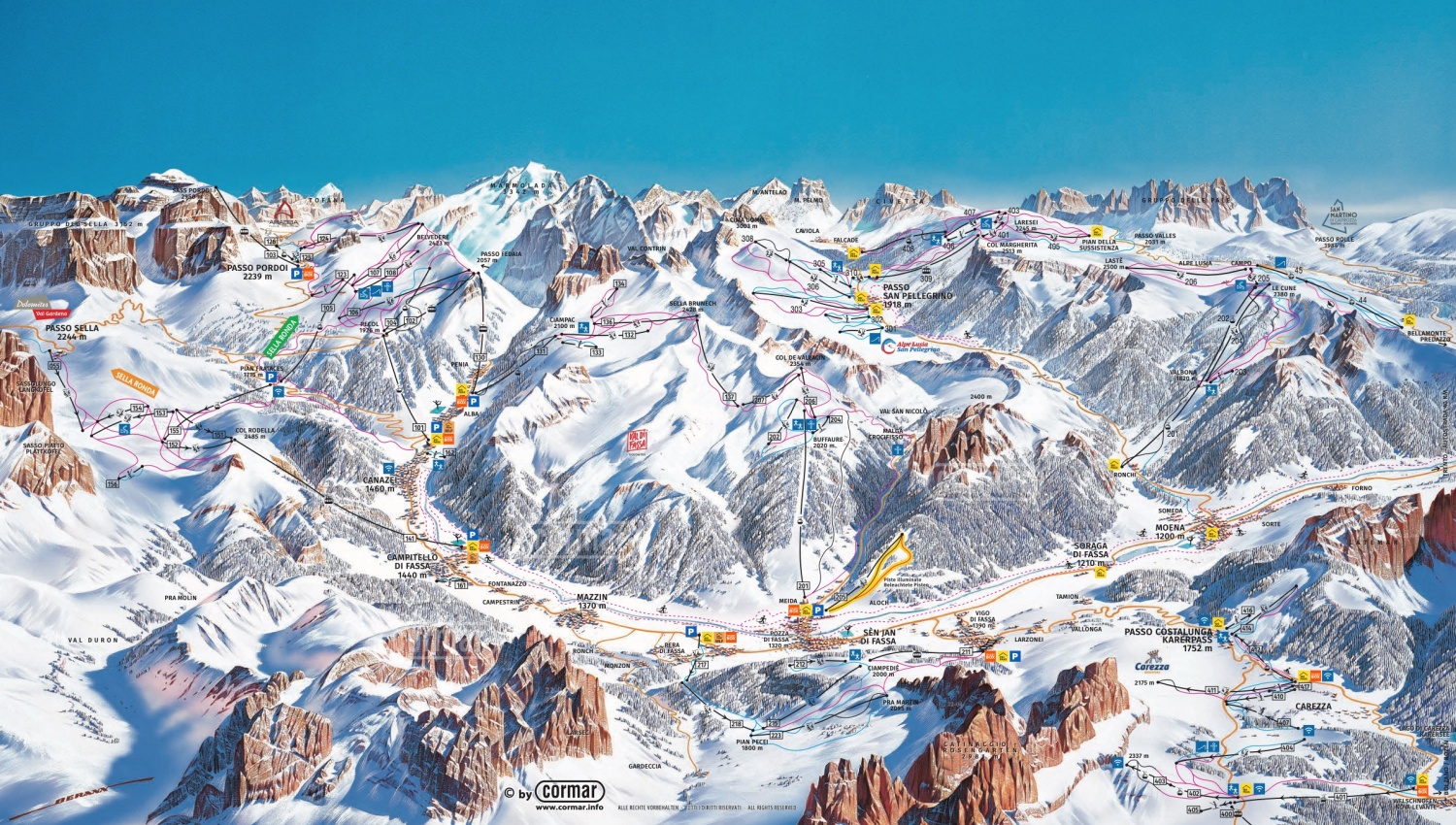 Most of the pistes at this end of the Val di Fassa are red, though few should be intimidating to confident intermediate skiers. If you really want to stick to mostly blues, the Catinaccio ski area or Carezza ski area are better bets, though these are also further away from the Sella Ronda slopes.

But to focus just on leaving the valley to do the Sella Ronda is to ignore the appeal of the Buffaure-Ciampac ski area. From Alba, take the Ciampac gondola and ski the hugely enjoyable Ciampac black - one of the best pistes in Val di Fassa - or head across towards Buffaure via a string of red runs and chairlifts, which can feel a bit exposed on windy days.

At Buffaure there's another long black run down to Pozza di Fassa, or, if you don't fancy that, you can take the long red, which leads down to a long easy stretch along the valley floor to the same end point. Up on the mountain there are a couple of great venues for a lunchtime stop, Rifugio Ciampac and Rifugio Baita Cuz, with its wonderful barrel sauna and delicious pizza!

Also worth checking out is the ski area Alpe Lusia/San Pellegrino, noted for its modern lifts and well-groomed ski runs, extending over 100 km. The north-facing side of Alpe Lusia (Moena) is mostly red and black slopes with some steep, thrilling sections, including the Piavac. Meanwhile the sunny and gentle slopes on the south side, towards Castelir - Bellamonte, are ideal for families with children and for beginners.

For those looking for an adrenaline rush, the Funcross Col Rodella in Campitello di Fassa and the Lusia Boardercross in Moena are not to be missed, but fun is also guaranteed for children and beginners, who can have fun in the Family Park Capitel in the Buffaure ski area and in the Familypark & Funslope Canazei at Belvedere.

Advanced skiers looking for some 0ff-piste action should head to San Pellegrino Pass - one of the most eclectic ski areas in Val di Fassa. It brings together professional skiers and beginners, freestylers and freeriders, families with children, gourmets, snowshoe hikers, cross-country skiers and ski mountaineering enthusiasts. The Marmolada glacier is another popular spot for some off-piste, though the 2022 landslides mean much of the backcountry access is now off-limits.

The stunning Sella Massif does host some incredible off-piste skiing. Famous descents worth exploring include Val Mezdi - an off-piste ski-touring route from the Rifugio Boe that offers a vertical drop of 1,450m with a very steep start.

Valo di Fassa also lends itself to being part of a hut-to-hut Dolomites ski safari, with several rifugios in the area offering overnight accommodation - some in dorms but some also in comfortable double rooms.

For advice on off-piste or to hire a guide, try Val di Fassa Alpine Guides.

At the end of the day the Val di Fassa villages are full of skiers coming off the slopes to head for the bars or cluster around the bus stops to catch the free buses back to their accommodation. Canazei is the de facto ski capital of the valley. Its historic town centre is lined with houses decorated as if they had come straight out of a fairy tale, small artisan workshops and bell towers with pointed spires.

At the far end, Moena is known as the 'fairy of the Dolomites' and its lively town square makes it a popular tourist spot. Campitello enjoys a good reputation as a mountaineering town and is a great mix of modern amenities and traditional wooden verandas and stairs, historic buildings and narrow twisting streets.

Pozza is notable as a centre for well-being and relaxation, thanks to the Aloch sulphur spring, the only one of its kind in Trentino. Its thermal waters are used in skin care treatments at many local wellness centres. Try the treatments for yourself the Terme Dolomia, the QC Terme Dolomiti or at the Aquapark Vidor.

The Ladin culture adds a unique twist to the usual high quality of Italian eateries, from valley restaurants to mountain rifugios. The area also has a couple of Michelin-starred restaurants: L Chimpl in Tamion (Vigo di Fassa), and Malga Panna in Moena.

For apres-ski bars, you'll find the widest choice in Canazei, including the small but very lively Apres Ski Paradis - a ritual stop after coming off the Belvedere ski area - and the Rosengarten Pub in the historic town centre.

For ski hire in Val di Fassa, where you stay will dictate where you hire. There are nearly 30 rental outlets throughout the valley including Sport Platter in Canazei, Gross Sport in Pozza, Tony Sport in Vigo, Sport Navalge in Moena and Sporting 2000 in Campitello.

If you need ski lessons either private or in ski school, the best place to start is the local branch of the Italian ski School in your resort. For example, in Canazei that means the Canazei/Marmolada Ski School. Lessons take place in the ski areas Belvedere (meeting point in Pecol; phone office +39 0462 600142) and Ciampac (meeting point on arrival of the cable car, phone office +39 0462 601539). English courses available. Details of other ski schools and ski instructors can be found here.