With thrilling winter sports, relaxing ancient spas, spectacular landscapes and fascinating culture, the Italian Alpine resort of Bormio is a mountain treasure waiting to be discovered...

Proudly presented in association with Bormio

Nestled high in the heart of the Italian Alps, the prestigious mountain resort of Bormio is a jewel of art and culture with a history stretching back thousands of years. Surrounding it is a landscape of vivid colours: the white of the ever-present snow of the glaciers, the bright green of the woods and meadows, and the blue of the sky, above dark, transparent waters. For visitors, Bormio is a paradise for sports, nature, art and culture lovers, as well as for relaxation and wellness throughout all seasons.

In winter Bormio and its Valleys are the ideal place for those who love skiing, snowboarding, and telemark skiing. Its three ski resort areas combined have more than 115 km of ski runs, including the legendary Stelvio and Deborah Compagnoni runs, which see races at all levels but most notably the Alpine World Ski Championships and World Cup downhill races.

It's not just for alpine skiers either: immersed in nature, you can slide along the groomed tracks on your classic skis, or skate the corduroy using the free technique, all in the pristine silence of the Stelvio National Park. Bormio has three Nordic areas with 45km of tracks for all tastes: from the easiest tracks in Bormio town, to the most technical tracks in Valdidentro and Santa Caterina.

Particularly fascinating are ski mountaineering and snowshoeing excursions within the Stelvio National Park, which provide the freedom to immerse yourself in this glorious landscape. With abundant snowfalls that cover the peaks and the surrounding slopes, Bormio is the ideal destination for lovers of ski touring skins or snowshoes. Whether it's fatigue or excitement that pushes you to reach each summit, once on top the views will be ample reward, as well as a well-deserved rest, perhaps in one of Bormio's beautiful mountain refuges.

Every year in January Bormio organizes the non-competitive downhill race Peak to Creek to put even the most expert skiers to the test. This event is held on one of the longest downhill ski runs in the world. Covering a distance of approximately 10 km and a vertical drop of 1,775 metres in one continuous run, from Cima Bianca (3,012m) down to Bormio town (1,225m above sea level). Are you ready for the challenge?

Elsewhere, all snowboard lovers and freeride enthusiasts are well catered for - from Bormio snow park's expertly designed jumps and terrain features, to the two freeride areas where riders can go wild, kitted out with the appropriate safety equipment.

Snow sports are not just for winter in Bormio either - because from May to November, the Stelvio glacier becomes the largest summer ski area in the Alps, with more than 20 km of slopes between the Stelvio Pass at 2,758m and Monte Cristallo 3,450m. No wonder many of the greatest ski champions choose the Stelvio resort for their summer workouts!

You don't have to hit the slopes to enjoy winter in Bormio and its Valleys, as in addition to skiing and snowboarding there are numerous activities for all ages, such as dog sledging, ice climbing, ice skating, and curling. Plus there is biathlon, the thrill and fun of Fat Bike snow cycling, and the excitement of watching the world from high above while tandem paragliding.

After a full day outdoors, it's time to relax mind and body. Immerse yourself in our natural hot springs (37°- 43°) and enjoy their healing properties, known since Roman times, and also appreciated by Leonardo da Vinci. Three thermal spas serve every need all year round. You can choose from more than 70 different thermal facilities, including both indoor and outdoor pools, mud baths, beauty treatments and much more. The Bormio Terme is for the whole family, QC Terme Bagni Vecchi provides a gentle step back in the time, and QC Terme Bagni Nuovi lets you soak up the flavour of 19th century art nouveau. 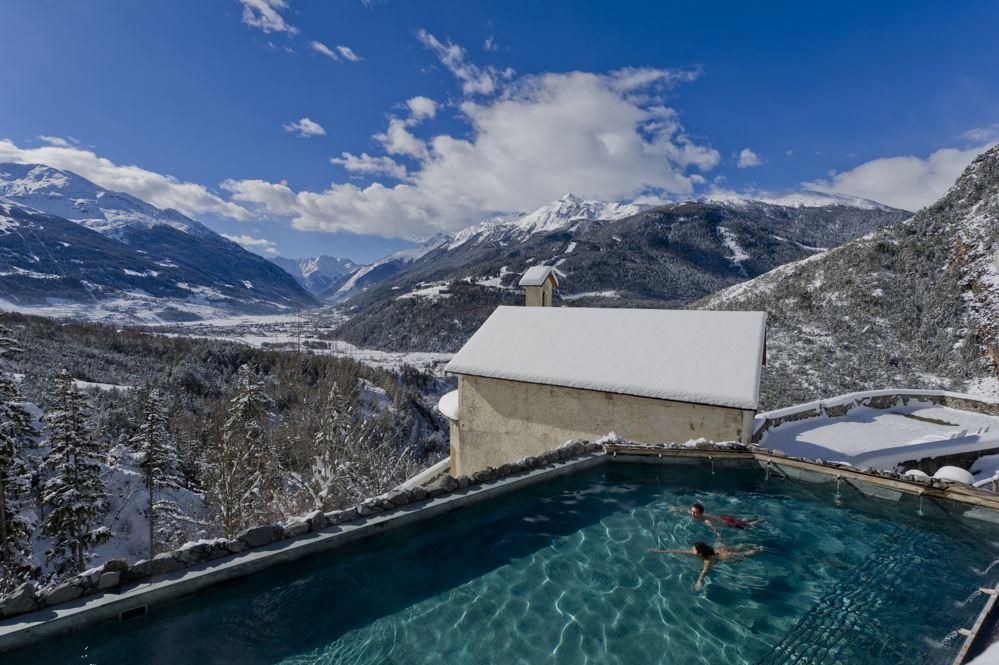 Food for the senses

And finally, after sport and relaxation, it's time to sit down at the table and savour our local specialities: Sciatt, delicious buckwheat and cheese fritters, cured meats such as Bresaola and Slinziga, and local Bitto and Casera cheeses; followed by Pizzoccheri, buckwheat pasta, and Malfatti. We also suggest you try Polenta Taragna with wild game, and for dessert a slice of Bisciöla.

All these delights pair wonderfully with the wines of the Valtellina and the after-dinner drinks of Bormio such as Braulio and Taneda, prepared with local aromatic herbs.

Food for the mind

And now that the body is well strengthened, it's time to focus on the cultural highlights. The history of Bormio and its neighbouring towns goes back for hundreds of years, and is preserved through many folk traditions, providing a bridge between past and present.

Take a walk in the beautiful historic town centre of Bormio, with its churches, 'Palazzi' and museums; immerse yourself in the atmosphere of ancient times, and discover the history of a town that was a small municipal democracy in the centre of the Alps for 700 years.

Definitely the best way to experience the medieval soul of the town is participating in the Carneval di Mat which takes place every year on Carnival Sunday. On this festival, the 'Fools' oust the 'Mayor' and elect their new 'Podestà -Mayor', who is sovereign of the town for the day.

A further event is the fascinating ancient tradition of the 'Pasquali' on Easter Sunday. During the Easter Parade the inhabitants of the five districts (Buglio, Combo, Dossiglio, Dossorovina and Maggiore), dress in the traditional costume, carry the 'Pasquali' (handmade floats representing religious themes) along the streets to the main square.

There has always been a good competition among Bormio's neighbourhoods, which is brought out best in February during the "Palio delle Contrade" (five districts race), during which the inhabitants challenge each other on skis, preferably wearing vintage clothes or the traditional costume of Bormio. Exciting and colourful, these traditional events are a wonderful excuse for locals and tourists to mingle and enjoy the spectacle, while preserving the mountain cultural heritage.

This and much, much more, awaits you in Bormio's fun, white winter.