A purpose-built ski resort with a few large hotels, a huge car park, some ski shops and not much else other than a generously snowy piste. Aesthetes might recoil, but what more do you really need for an early blast? says Michael Wolstenholme

Landing at Innsbruck isn’t the most calming experience for fidgety flyers. You come in with high mountains either side which can turn the valley approach into a massive wind tunnel. It’s giving us a bumpy ride, but what do I care? From where I’m bouncing, the snow looks amazing!

Seven months since I last unclicked my skis, I’m heading to Hochfügen in Austria’s Zillertal Valley to catch the exquisite buzz that only early season can give. Hochfügen, you say? Hochfügen? True, it’s hardly a household name, but here’s why Hochfügen works. 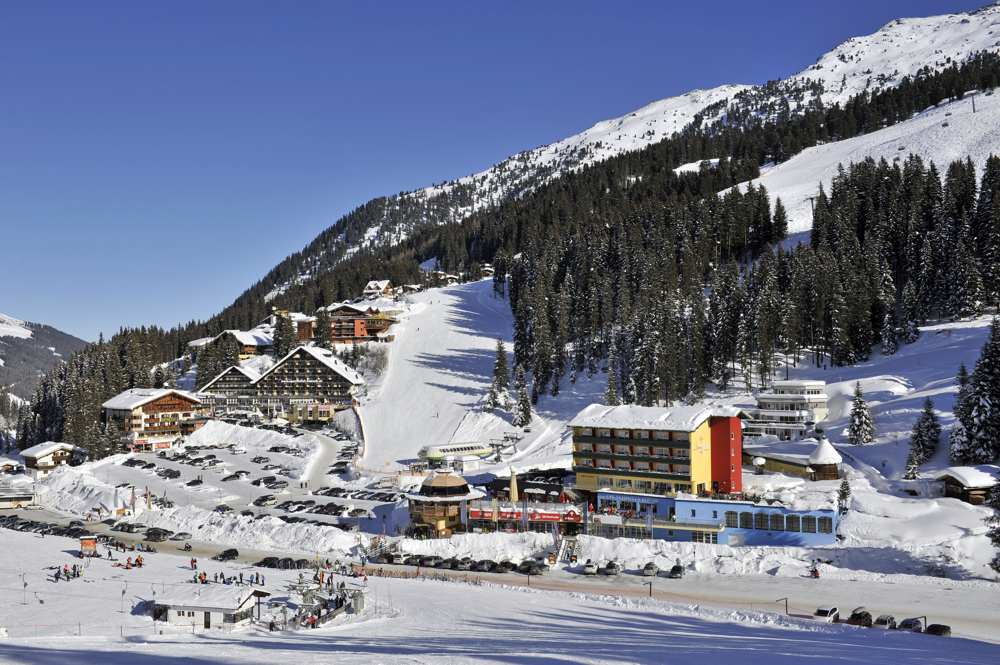 It’s high enough at 1,500-2,500m, has an ample ski area of 181km, which, following the tie up with the Hochzillertal zone, has pushed it into the premier league of Tyrolean ski areas. Its early snow record is superb, and it’s only 50km from Innsbruck. But, most significantly, this is freeride territory.

The resort has gone out of its way to promote safe and responsible freeriding. This includes the Freeride Point Hochfügen, which is a central contact point and information centre providing up-to-date avalanche information, weather reports, courses and training sessions on avalanche transceivers.

There are also free checkpoints at access points to the off-piste terrain, which contain maps, emergency telephone numbers and what the degree of the slopes is in that area. Another great initiative is the ‘Avalanche Search Field’ at the top of 8erJet Gondola. Here people can practice avalanche search techniques using transceivers. You can also do as I did and take a free course on what to do in an avalanche (see article here).

If you are not quite ready for the full-on off-piste adventure, then Hochfügen also has a starter freeride area where the slope gradient is moderate – making it ideal for those first off-piste lessons. Good, joined-up thinking. No wonder this place is a hot spot on the freeride circuit – you can go from beginner to expert without leaving the hill.

On piste, the skiing is superb with lots of compacted fresh snow and seriously uncrowded pistes. Over half the runs are red and there is a decent complement of black. For beginners and lower intermediates there are some nice wide blues to learn your trade on.

I love it when the anticipation at waking up for that first day of skiing kicks in. It’s like Christmas come early, which, this being mid-December, it has. So, first lift for me. Surprisingly not many
others had the same idea.

I stayed at the 4 star Hotel Lamark, a lovely place with the biggest bedroom I have ever slept in! It’s also known for its food with the restaurant being run by a famous Austrian TV chef, Alexander Frankhauser. If my first night’s meal was anything to go by his ratings must be impressive.

And if you can steer clear of the big restaurants at the top of the main lifts where a dollop of spaghetti and smaller dollop of bolognaise is splashing out, you can find some lovely smaller cosy Austrian alpine inns in this area. The Montana Alm located near the Holzalm lift in Hochfügen centre was a great place to sit out and enjoy a strudel and a coffee and the Kristallhutte at the far side of the Hochzillertal section at the top of the Panorama II drag lift will not disappoint you.

I also tried my feet at snowshoeing one evening. There were about 10 of us in the group plus the guide’s huge mountain dog. With flame torches in hand we trekked through the forest for about two hours, covering about 10km.

Knackering, but wandering in the middle of nowhere in a freezing snow-covered forest made me feel a bit Bear Grylls. And our reward was a massive plate of traditional Tyrolean
biscuits washed down with glühwein – fantastic!

Hochfügen is great for that weekend escape, but if you’re here for a week I would suggest buying a Zillertal Superski pass which covers the whole Zillertal Valley (671km piste) and do a Zillertal ski safari holiday taking in 2-3 resorts along the valley.


Hochfugen is in the Zillertal Valley region of the Austrian Tirol.


BY AIR nearest airport is Innsbruck (35 miles)
BY CAR about 11 hours from Calais (699 miles)
BY RAIL Regular trains from Innsbruck stop at Jenbach railway station. Change here for the local Zillertal railway to Fugen and then take by ski shuttle to Hochfugen. (www.oebb.at)
AIRPORT TRANSFERS Airports Shuttle Express (www.airports-shuttle-express.com) from €177 return. Innsbruck Airport Transfer (www.innsbruck-airport-transfer.com) from €130.
WHERE TO STAY Snow stayed in the 4* Hotel Lamark in Hochfügen. Prices start from €110 per person per night.
MUST DOS Have dinner at Restaurant Alexander in The Lamark Hotel. Take a freeride lesson in the beginners freeride area. Practice avalanche search and rescue for free.
TOP TIPS Take a day trip to another ski resort in the Zillertal Valley such as Mayrhofen using the free Zillertal shuttle services. Don’t take slalom skis off-piste…trust me!
BEST FOR Freeriders, experts, intermediates and weekenders.
USEFUL CONTACTS www.tirol.at, www.zillertal.at, www.hochfugenski.com, www.lamark.at,