The previously-sleepy Swiss resort of Andermatt is being transformed by a serious injection of cash. Pete Coombs takes the family out to visit its latest incarnation.

It started—like many of the best ideas do—with a half-drunken conversation, in this case with a gnarled old Chamonix mountain guide. I asked: “If you could buy a house anywhere in the Alps, where would it be?” His reluctant reply, as if he didn’t want to share the secret, was “Andermatt”.

When pressed as to why, a little twinkle appeared in his eyes, and he began waxing lyrical about the near-endless off-piste routes off the peak of Gemsstock, and the fact that, while some zones get snow when the winds blow north, and some when they come from the south, almost all of the storms which cross the Alps seem to dump snow on Andermatt.

As I floated happily in the swimming pool at the Chedi Hotel after a day of powder skiing, I had to admit that the old boy had a point. We were nearing the end of what was, in many places, a subpar season, but somehow, Andermatt had come up with the goods.

As my children— equally delighted by the days’ adventures, although notably less exhausted—splashed around catching the still-falling snow in their mouths, I allowed myself a moment of smugness. When I’d asked where they wanted to go skiing at Easter, they’d just said: “somewhere good!” Well, this was pretty much the definition of good.

It wasn’t always this way. Andermatt has struggled at various points in its past, and has already risen from the ashes twice over the course of its long history. Earlier this year however, came an announcement which seems set to ensure its development for the foreseeable future.

On March 28th, shortly before our visit, US ski conglomerate Vail Resorts, which operates 40 destinations around the world, announced that they had agreed to buy a 55 percent stake in the company that runs the resort. As a massive multinational, Vail Resorts is not without its critics, but the fact that they have chosen Andermatt as their first ever European investment speaks volumes for the resort’s potential.

Partly, this has to do with its location. Andermatt lies on a large, open meadow at the crossroads of the Urseren Valley, running east to west, and the historic trade route of the Gotthard Pass, which runs from north to south. From the middle ages onwards, goods from Venice and Millan would move through the pass on mules en route to the cities of Northern Europe.

Passing trade kept the town booming well into the 19th century, when stagecoaches raced over the new road, before the arrival of the railway cut the journey between Milan and Bern to just ten hours. The town’s fortunes slumped, as train travellers no longer needed to stay overnight, or even stop to eat in Andermatt.

The town’s first phoenix act came courtesy of the Swiss army, who chose Andermatt as their winter training base in 1885. Every man in Switzerland is required to serve in the military, even to this day, so many a Baby Boomer has 'fond' memories of Andermatt as the place where they struggled through the snowy ordeal of their national service.

The economic impact of all these soldiers saved the village from becoming a ghost town, but did very little for it aesthetically. The carbuncle-like military buildings, and antiquated lift system meant tourists were more likely to head for the ski-specific villages of Saas Fee or Verbier, and when the army started winding down their presence after the cold war ended, Andermatt was once again under threat.

This is where the town’s tale takes an unexpected turn—a chance meeting between the former-Swiss ambassador to Egypt and the Director of Security for the Canton of Uri, in which Andermatt sits, led to a 2004 phone call with an Egyptian resort developer, Samih Sawiris. Four months later, after a quick flight around the valley in a helicopter, Sawiris said simply: “I’ll help.”

Sawiris, the citizens of Andermatt would learn, doesn’t do things by halves. When he said he’d help reinvigorate the village’s fortunes what he really meant was “I’m going to build 3,000 new beds across six four-and-five star hotels, forty-two apartment blocks, and twenty to thirty private chalets. I’ll also build an 18-hole golf course, an indoor swimming pool, and start work on a new development that will eventually double the village’s footprint.”

All in all, his company ASA spent over 1.3 billion swiss francs (£1.14 billion) on the project, which helped breathe new life into the old town. The Chedi Hotel, where my family are staying is a case in point, bringing five star facilities like the swimming pool, spa and incredible cocktail bar (with a whisky collection to die for) to the heart of the old town.

Andermatt's rapid transformation also helped attract the attention of Vail Resorts, tempting them to become majority partners with ASA. And while Sawiris’ company had already invested some money in the on-hill infrastructure, the 110 million swiss francs (£97 million) that Vail will pump into the lift system and the “on mountain guest experience” could be transformational.

Of course, when we visited, none of Vail's new money had come on-stream, and the first cable car we climbed on most mornings—from 1,440m to 2,212m—looked somewhat dated. But the terrain it accessed was nothing short of stunning. As soon as we stepped out, at 2,961m, it became obvious what my old friend from Chamonix had been getting misty-eyed about—the off-piste options were endless.

Despite their tender years, my kids are now relatively experienced backcountry skiers, having been thrown in at the deep end on several previous trips. Because we had powder on our first day, we decided to get straight into exploring the sidecountry off pistes 70 and 71—the red and black runs which snake their way down 700m of vertical from the top of the cable car.

There were short, steep pitches of light fluffy snow, the odd little rock drop, and some wonderfully playful terrain. Had we been slightly more warmed up, the options would have been more expansive. There are plenty of itineraries that run all the way down to the valley floor, instead of stopping at the mid-station. And when the conditions are right, you can drop off the backside of Gemsstock, popping out at the village of Hospental, from where you can catch a shuttle bus back to Andermatt.

The other option from our hotel was the short walk to the Gutsch-Express gondola. This links into the Sedrun ski area and the train system, which is free to use with any multi-day ski pass. At the top of Gutsch-Express at 2,362m, we found wide blues and reds, which (were it not a powder day) would have been perfect for finding our feet, or carving at speed.

As the week wore on and the snow softened up, we spent more time on the pistes, and soon felt the urge to get some miles into our legs. Although it’s never going to compete with the likes of the Three Valleys, or some of the mega-resorts in Vail’s existing portfolio, there’s a decent amount of piste to be explored here. One sunny morning, we set off for the town of Disentis at the far end of the lift system—as far from Andermatt you can get.

The end of the line

From the Gutsch-Express we took rolling pistes and chair lifts to the top of the Oberalp pass, where the valley’s military history was very much in evidence—grey concrete barracks were visible, peeking out from between the perfect white snow drifts.

From here we ripped on empty pistes to Cuolum Val, where the kids insisted on looping the terrain park and ski cross, until (fortunately, as far as I was concerned) the adjacent drag lift closed for lunch. We then blasted down 700m of vert, before stepping out of our skis and onto the train at Dieni for the short hop to Sedrun.

Unfortunately, this was where the snow ended. As the bright red train pulled into the very, very green village, we found ourselves looking up at drag lifts that would usually carry people up to the next cable car, swinging in the wind as cows with bells munched beneath them on the fresh spring grass. Thankfully, in the station underpass we found a phone number, and in no time at all, a minibus arrived to take us to the Luftseilbahn lift.

From here, we felt like we were the only people on the mountain—carving down some of the widest pistes I’ve ever been on, before catching a couple of lifts up to Pez Ault at 2,833m, and then ripping down the 1,000m descent to Caischavedra. Normally, a blue or a black would extend the run for a further 600 vertical metres down to Disentis. But not this late in the season. 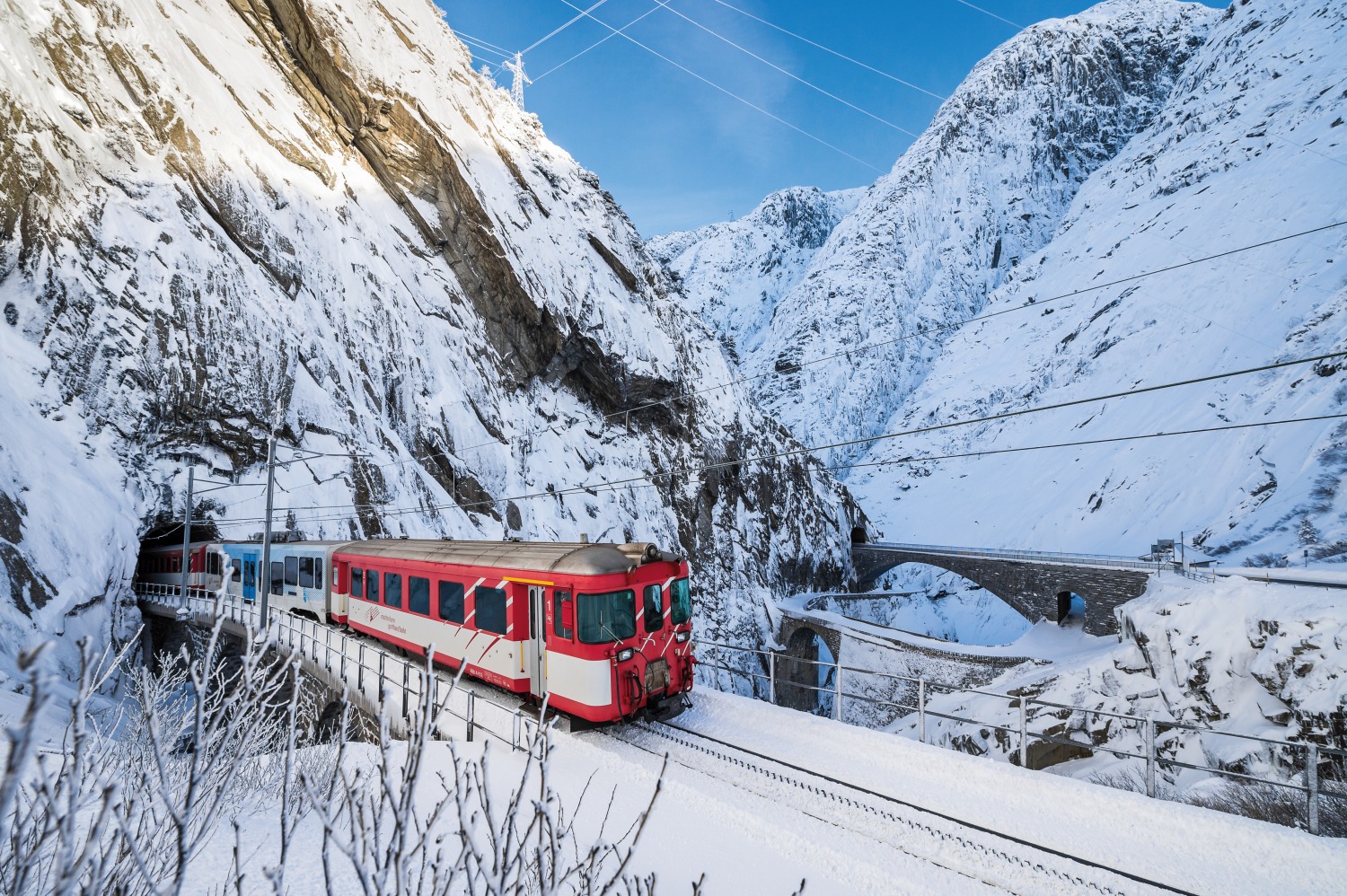 I did a quick tot up of timing, and realised if we waited for the next cable car down, we were going to miss our train back to Andermatt. Thankfully, the accommodating lifty sent us down early—as long as I promised not to tell anyone (oops!) and we arrived just as the Glacier Express pulled in. We sat among a large group of Japanese tourists making the journey from St. Moritz to Zermatt—a reminder that there’s more to these mountains than just the skiing.

As we cruised back along the green valley, however, looking up at the snow covered peaks we’d been ripping down just hours before, we counted ourselves lucky. To have had that, plus powder, at this time of year, in a poor snow season, really was something special.

I will almost certainly never have the kind of money Samih Sawiris and Vail Resorts have available to them. But if I did, I can see why I’d want to pour it into a place like this. 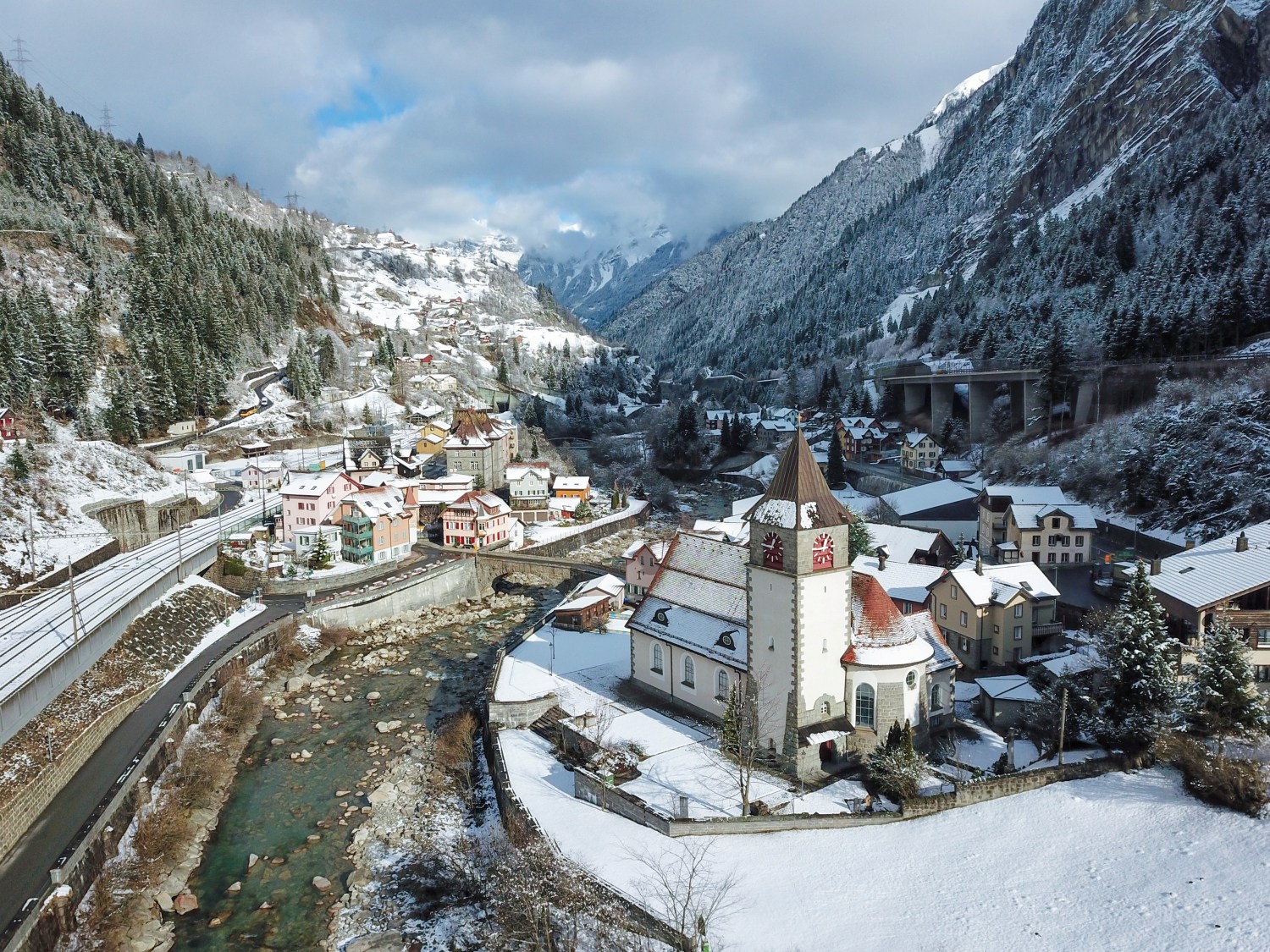 Pete and his family stayed as guests of the luxurious Chedi Hotel Andermatt. It boasts the longest hotel pool in Switzerland, a fantastic cocktail bar, and excellent restaurants in a downtown location close to the train station. Rooms start at £680 - which includes breakfast and access to the spa facilities.

By train - Local trains run regularly from Zurich, which you can reach from the UK via a change at Paris. London to Andermatt takes around 11 hours. For more details see seat61.com or book at trainline.com.

By plane – The nearest international airport is Zurich, a 1hr 30m drive. It's served by airlines, including Swiss, Helvetic Airways, EasyJet and British Airways.

By car – Andermatt is a 9-hour drive from Calais.