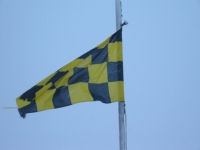 French ski resorts are on high alert for avalanches after heavy snow. Many resorts have hit avalanche risk 5 – the highest level of warning, which means avoiding all avalanche terrain as both natural and man-triggered avalanches are very likely.

A metre of snow has fallen at many French resorts, and many are opening early, but high winds at altitude have added to avalanche fears.

Two off-piste skiers were caught in an avalanche in the resort of Tignes on Wednesday. They were rescued but one later died in hospital.

The two skiers were skiing with a group in the Toviere sector. Reports suggest no-one in the group was wearing an avalanche transceiver.

Since Wednesday, when the avalanche risk was 4, more snow has fallen and the risk level has been raised.