Zermatt is inaccessible for the second time in two weeks as the avalanche risk is heightened, and blocked roads and railways strand thousands.

The Alps are experiencing a huge amount of snowfall right now – great for some, but for those in the eye of the storm, it means travel chaos and potentially dangerous conditions.

The train lines and access roads to Zermatt have been completely cut off since Saturday (20th), making rail travel in and out of the resort next to impossible. The resort’s website reported that the earliest the trains are expected to be up and running again is Wednesday morning (24th), depending on how the weather progresses.

Tourists lined the streets queuing for tickets to be airlifted out of resort by helicopter yesterday, which so far has been the only means of escape. However, the service has been suspended again this afternoon due to dangerous weather conditions, and high demand for the aircraft elsewhere to help with avalanche blasting. Journalist, Susan Misicka, shared this video on Facebook of the centre of Zermatt yesterday.

The increased avalanche risk along with the heavy snowfall has also resulted in connecting roads to surrounding villages being closed and the avalanche warning raised to a 5. Justifiably so, if this photo posted by Moritz Mueglich‎ on Zermatt’s community Facebook page earlier today, of a huge avalanche just outside the town is any indication. 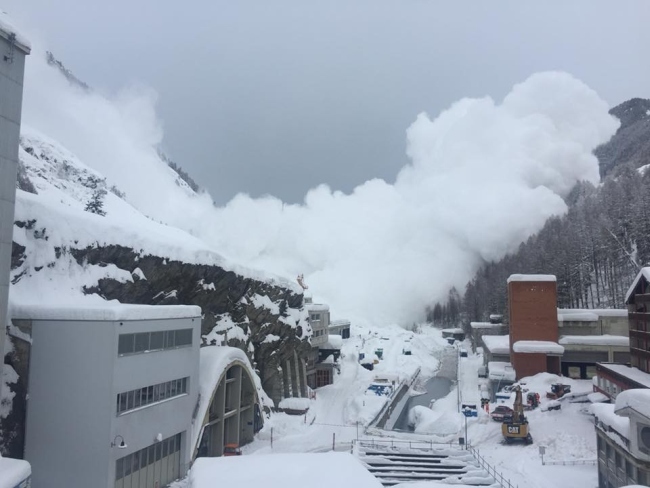 It has been a similar story in parts of Austria over the weekend, as resorts such as St Anton currently have no railway access and are only accessible to vehicles with snow chains. Italy’s Cervinia has banned all vehicles apart from emergency and snow removing vehicles from the streets, and Chamonix, France is also being hammered by storms. They have closed several roads and have made snow tires and chains highly recommended and mandatory in certain areas.

Lower altitudes need to be on the lookout as well, as heavy rain and worsening conditions are predicted to cause major flooding and landslides.

The €1 Million-a-Week Superyacht Which Guarantees You Fresh Tracks