From the Sölden piste map to the best ski schools, ski hire shops and après ski bars, here’s the lowdown on this lively Austrian resort with a buzzing après scene.

Sölden in Austria's Arlberg boasts an impressive ski area, set around a traditional - if sprawling - village base, with a modern and efficient lift system. But it can boast an even bigger party scene, with large groups of revellers revelling well into the night.

With some of Austria’s highest pistes, and bags of intermediate terrain, Sölden ski resort won’t disappoint on any level, on or off the pistes. It's only 90km from Innsbruck, so makes for a very easily accessible ski resort and great weekend destination.

The Ötztal Arena has seen a lot of investment in recent years in state of the art lifts, and these now reach all the way up to the two glacial skiing areas of Tiefenbach and Rettenbach, making the resort snow sure all season.

Not too long ago, Sölden's recognition as a party spot became too much for some residents, and steps were taken to limit excesses of rowdiness. But even the deliberately dull crowd couldn’t put a dampener on its fantastic après ski vibe, and Solden is still party central. It's also generally cheaper than, say, St Anton.

A regular on the Alpine Ski World Cup circuit, Sölden hosts world class ski events throughout the season, yet the 144km of pistes, and uplift capacity of 68,000 people/hour, soon eats up all the crowds. These numbers do have an effect on conditions, however, as many of the pistes, particularly down into resort, can be heavily cut up by the end of the day.

Sölden opens each year in October and with its high altitude and glacial skiing, doesn’t close till late May.

Off the slopes, the James Bond Experience at the top of the Gaislachkogel lift (a film location for the Spectre movie) is well worth visiting.

Sölden is home to the ‘Big 3’, which are three skiable mountains over 3,000m: Schwarze Schneide, Gaislachkogel and Tiefenbachkogel. All are easily accessible by ski lifts, making for some long and steep descents. At the top of the Gaislachkoglbahn you’ll find a new panorama restaurant, made in a very modern style from glass and steel. Featured in the Daniel Craig Bond film Spectre, its roof has a viewing deck, with views towards Italy. It's connected to Gaislachkogl peak by a suspension bridge. 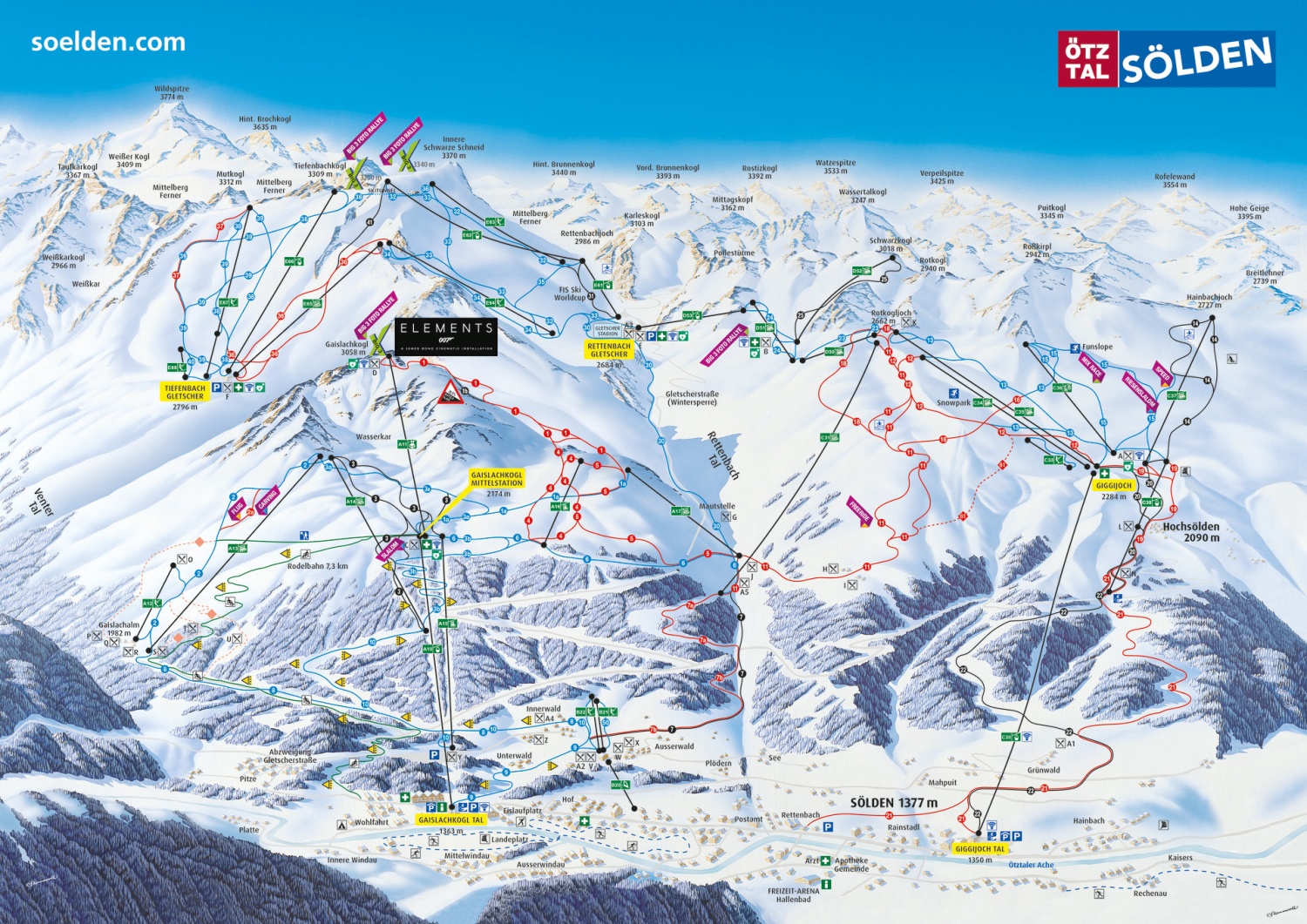 The main Sölden-Hochsölden-Gaislachkogl sector has over 100km of trails, interlinked by a number of high capacity lifts and long runs, the longest of which descends for 10km, over 1,675m of vertical. Throw in the once separate glacial ski area - adding an additional 30 plus lifts - and the whole area offers a very respectable 144km of piste.

A challenge for skiers who like to clock up the miles, is the 'Big 3 Rally', which can be completed in a tough four hours, taking in more than 10,000m of vertical. The route starts at the base of the Giggijoch Gondola and continues through the 170m long ski tunnel that connects the Rettenbach and Tiefenbach glaciers, and takes you to the Tiefenbachkogl peak via the Tiefenbach gondola.

On the Rettenbach glacier you can ski down through the Rettenbachtal Valley all the way to the base terminal of the Gaislachkogl gondola. Once this lift has been taken and the descent made, you'll have clocked up some 50km.

Freestylers will love Sölden, as the Area 47 park is well planned and superbly maintained. Beginners are well catered for with a large selection of boxes and rails to progress on.

Freeride lovers - including those venturing off-piste for the first time - will find perfect powder runs and more than 70km of lift-accessible off-piste terrain. Thanks to the high Alpine altitude, and the two good glacier ski areas, the season is long, with locals finding fresh lines into May some years. Freeriders will especially enjoy the Gaislakogel Mountain, which has some of the resort’s best off piste, but it’s best to hire a guide as the slopes here are prone to sliding.

If you’ve never skied in Austria, then you won’t have experienced the world’s best après ski. The party starts here before the lifts close at the Sonnblick bar, before continuing back down to the village, where you have the Black & Orange Rockbar to name but one. If you want to carry on, you can go all night, even finishing up in one of the slightly seedy strip clubs on the high street, if that's your thing.

While Sölden does kick off at night, it shouldn’t be discounted as a family destination, as it’s well geared up with good ski schools, kindergartens, a toboggan run and swimming pool.

With regards to food, Sölden and its surrounding villages have around 50 restaurants to choose from. Most of what’s on offer are Tyrolean specialities, but pick up the resort’s restaurant guide (available free from the tourist office), which details the type of cuisine available in every restaurant. Categories quoted include home cooking, local cuisine, wild game, vegetarian, fondue, steak, children's menu…

On the slopes, Sölden rightly has a good reputation for its many dining opportunities, with 25 rustic and gourmet mountain huts to choose from.

There are multiple outlets for ski hire in Sölden, including Skiverleih Mietski.com, Sport Brugger, and Sport 2000 Riml.