Skiing in Canada should be on everyone's wish list and while the Rockies get all the kudos, the shorter flying times to the East Coast add to the appeal of resorts such as Mont Tremblant. Often known simply as Tremblant, this self-contained, purpose-built resort us based around an attractive pedestrianised village adjacent to a single-peak ski area. Although compact, it has a well-planned layout that makes the best of the available terrain and offers enough to keep all standards of skiers and snowboarders entertained.

Located in the Laurentian Mountains north-west of Montreal, Tremblant is the leading ski resort in eastern Canada. The core pedestrian village has been designed and purpose-built in an attractive (if slightly Disneyfied), Quebecois-French style, with multi-coloured low-rise buildings set out in a cluster of quaint streets. These are filled with chic shops, cafés, bars, restaurants, and quality hotels.

The resort is popular with Canadian and American visitors, and the relatively short flying time from the UK makes Tremblant a popular choice for British visitors too. The European-style ambiance, high quality amenities, and compact scale makes this a great destination for couples and families.

The low altitude of the resort and the ski area is misleading when directly compared with ski resorts in Europe - winter temperatures in this region of eastern Canada are often extremely low and the ski season here is long. Although the resort caters very well for families, those with very small children are best advised not to visit during the coldest mid-winter months.

The ski area on Tremblant mountain is divided into four sectors that cover the majority of the mountain: the Versant Sud (South Side) is the prime face of the massif, overlooking the village and the lake, and has a distinct eastern linked sub-sector called Versant Soleil (Sunny Side). The back side of the mountain is the Versant Nord (North Side) sector, which again has a further linked sub-sector known as Versant Edge (The Edge). 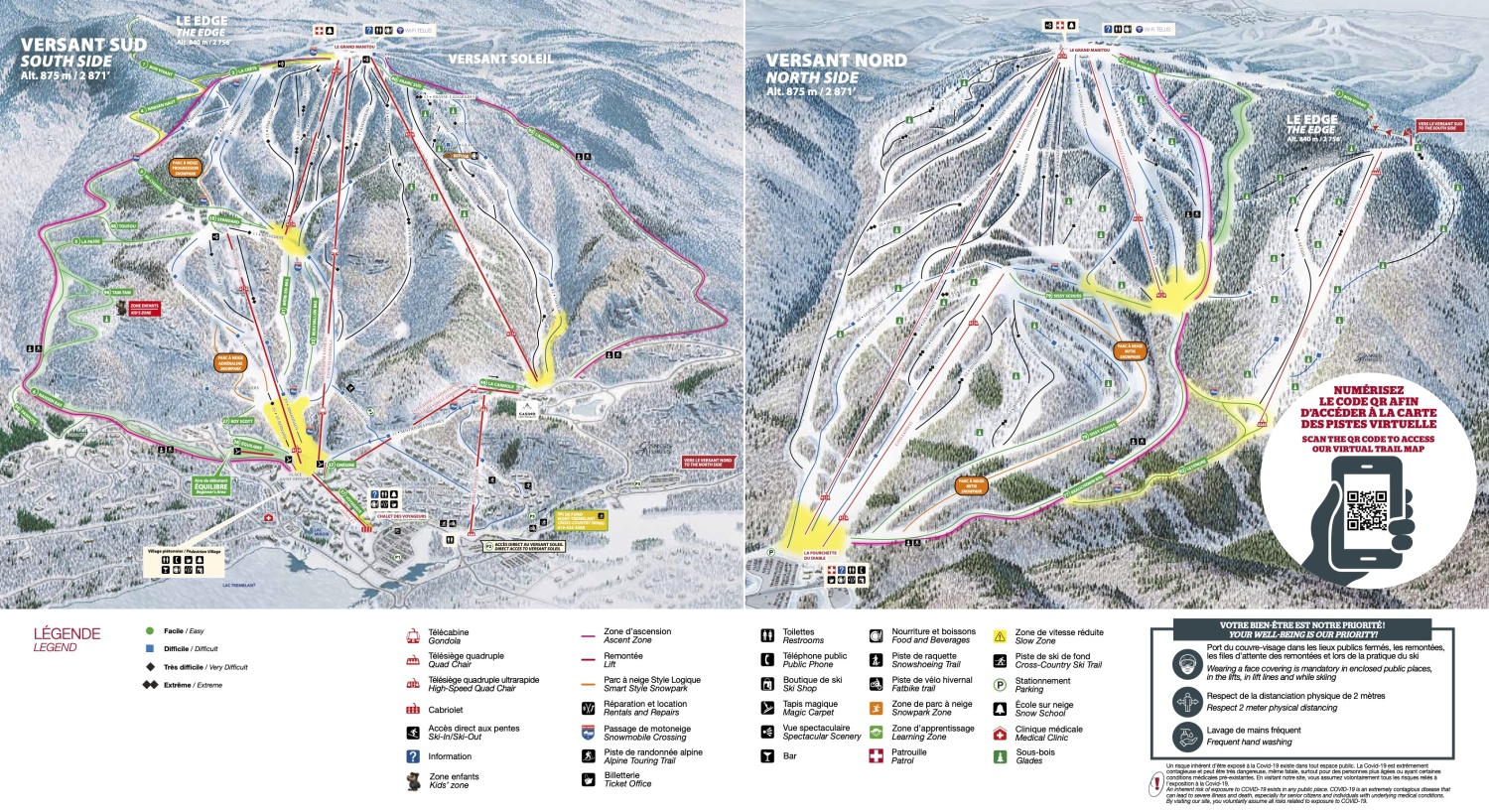 The entire mountain is forested, and skiing and riding through the 102 runs in this pretty landscape gives one the impression of being surrounded by parkland, which in many ways is exactly what this destination is.

A high-speed gondola rises from the base-area slopes at the village, linking directly with the summit, and is based next to a fast quad chairlift that rises to a mid-altitude area in Versant Sud that houses one of Tremblant's two snowparks. This and all other sectors on both sides of the mountain are also accessible from the summit.

A dedicated beginners' zone, equipped with Magic Carpet surface lifts, is located on the western side of the base-area slopes. Progression routes out on to the mountain are straightforward and the longest run in the entire area is Nansen, a green piste that flows all the way from the summit down to this beginners' zone. Novices can confidently tour around both sides of the mountain, avoiding the upper front and rear faces which house the steepest and most difficult terrain.

The rest of the area is a nice mix of short but enjoyable intermediate- and advanced-level pistes, mostly served by fast quad chairlifts. The slopes are also equipped with a huge network of over one-thousand snowguns, covering more than 75 percent of the ski area to ensure consistent snow conditions.

Off-piste here is limited but  a lot of thinning of previously dense forest on the Versant Nord side of the mountain has really upped the available ungroomed terrain – this is the place to come after fresh snowfall for some of the East Coast’s best glade skiing. Also fair to say that not every piste is groomed so much of the terrain gives up some good powder skiing after a fresh fall.

The traffic-free village at Tremblant is a pleasant place for a stroll during the day and in the evening, offering a nice selection of boutiques, cafés, bars and restaurants in which to spend a few hours. Sightseeing options around the resort include horse-drawn sleigh rides and helicopter flights. Alternative activities include ice skating, snow tubing, ice climbing lessons, snowshoeing and dogsledding, plus there's a small aqua-leisure and fitness centre.

There are well over a dozen restaurants in Tremblant, together covering a good range of international cuisine; some of the bars also offer good comfort-food menus. Après ski is reasonably animated, the best bars are concentrated in the Vieux Tremblant quarter of the village and nightlife mostly revolves around live music and dancing in the liveliest of those; the prime venues are the Café d'Epoque for fun theme nights and the P'tit Caribou for a younger crowd.

There's also a cinema in the resort; and a casino with slots, card gaming and roulette. Some UK visitors, used to the, er, working towns and communities of the Alps might find Tremblant a touch 'sanitised' but it works.

Ski hire in Tremblant is organised through the resort's own rental services with several outlets in the resort.

Similarly, the Tremblant Snow School will take care of all your lesson needs, whatever your level.