Skiing in Canada should be on everyone's wish list and Banff makes a great base from which to explore three contrasting local ski hills. So, here’s the lowdown on this three-in-one resort.

Banff has the curious status of being a top ski resort without actually having any direct lift access to the slopes. However, three ski areas - all of which are set deep within the stunning Banff National Park, a UNESCO World Heritage Site - make up what most Brits refer to as Banff.

The three resorts in question are Mt Norquay, Sunshine Village, and the Lake Louise Ski Resort - collectively known as the Big3. All are covered by the same Banff 3 Area ski pass, and served by connecting ski-bus services. And with 356 runs between them, plus some of the best free-ride anywhere in North America, the Big3 offer superb skiing whatever your level.

If you're blessed with enough bucks, a stay at the Fairmont Chateau Lake Louise is a luxurious treat - and saves on travelling - but the overwhelming majority of visitors will fetch up in Banff itself - and enjoy a frontier town experience with great bars and restaurants.

Despite being heavily marketed together, all three ski areas have their own character:

Mt Norquay, the smallest, packs a considerable punch on the piste with nearly half its slopes rated expert. It was the first ski hill to be created in Western Canada, in 1926, by Austrian, Swiss and German engineers working in the area. Today, sitting a mere 4km from Banff town centre, it's regarded very much as a locals' hill. It's the place where Banff residents learn to ski, and that's underscored by the fact that you can buy hourly ski-passes here.

Sunshine Village, the mid-sized triplet of the 'Tri-Area' ski resorts, Sunshine Village lies 16km south-west of Banff and is the highest of the Big3. It's predominantly a day-visitor ski area, but is also unique in the region as being the only resort with on-hill accommodation - the ski-in, ski-out Sunshine Mountain Lodge. It also has the most challenging slopes and best snowfall.

Lake Louise is situated 60km north-west of Banff, and is the largest of the Big3. It's one of the leading year-round tourist destinations in the Canadian Rockies. There are two resort village clusters at Lake Louise: the larger of the two is just off the Trans-Canada 'Icefields Parkway' Highway, around the site of the original Lake Louise railway station, about 2km from the slopes. The other is a further 3km away and centred on the renowned Fairmont Chateau Lake Louise Hotel, sited by the lake itself. It has reliably good snow and offers something for all abilities and age groups.

The combined ski terrain of all three resorts is 7,748 acres, but you can only ski them one at a time, so here goes:

Mt Norquay: Not a ski hill to be taken lightly, with 44 percent of its 190 acres of terrain classified as black diamond and double black, and just 20 percent deemed as suitable for beginners. There are 60 runs, adding up to 16km. 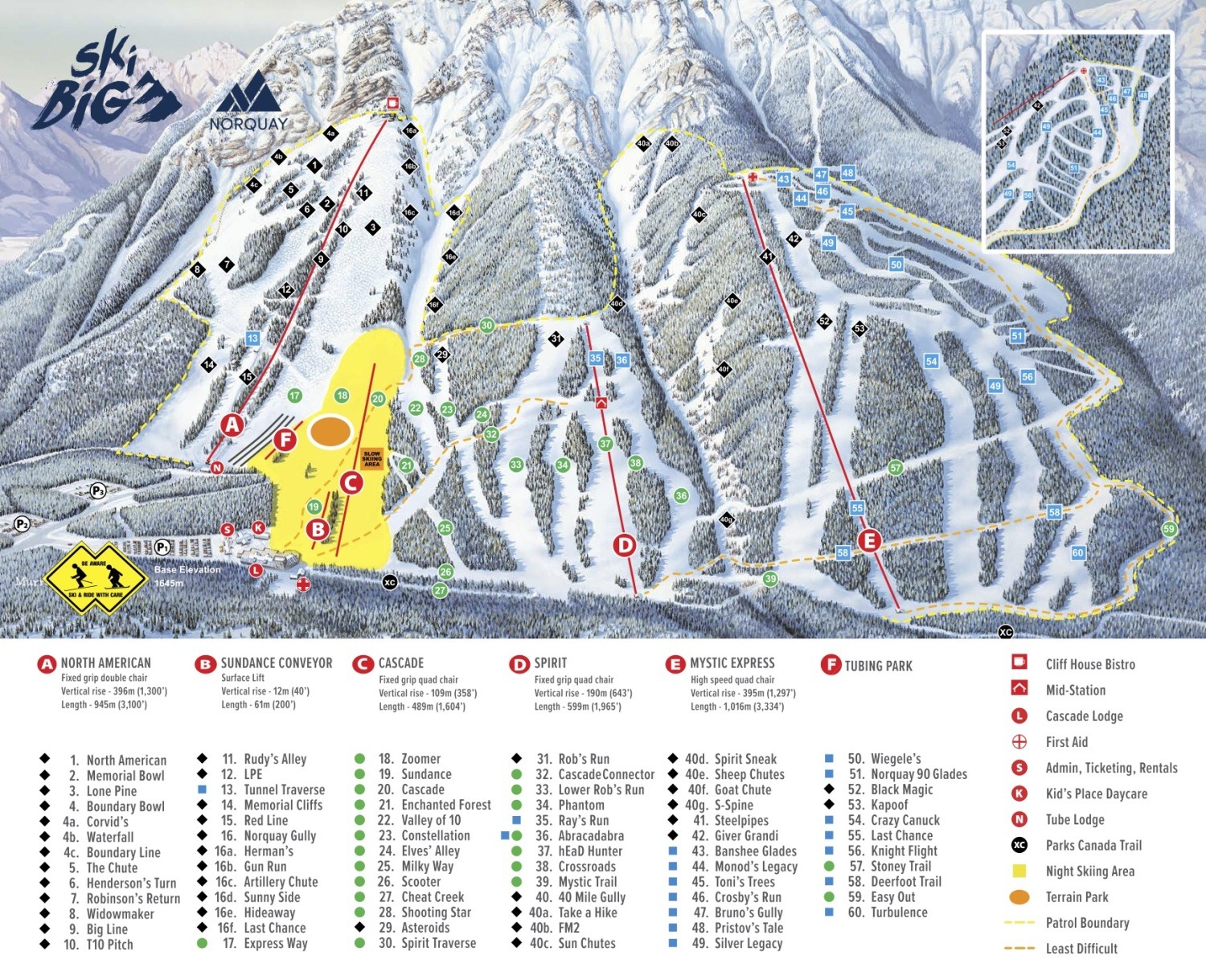 That said, despite the pleasing lack of crowds during the week, a day or two here, at most, would satisfy most skiers. Still, it's great for a warm-up day or when the weather is poor.

The beginners' terrain, is off the Cascade and Spirit lifts, but while there may not be much of it, anyone looking to progress their skiing would do well to ski with an instructor and clock up run after run, with minimal lift time.

All of Norquay's 28 runs fan off from five chairs which all start from the base area. The resort's signature double black diamond run, Lone Pine, is reached via the North American chair which serves an exclusive black/double black area, and the other expert terrain is accessed if you turn left off the top of Mystic Express.

Sunshine Village: Sunshine is tucked away in a high upper valley a 15-minute gondola ride up from its base access point. There are two home-run pistes to this base, but they're both long road-like trails rather than a true end-of-day blast. 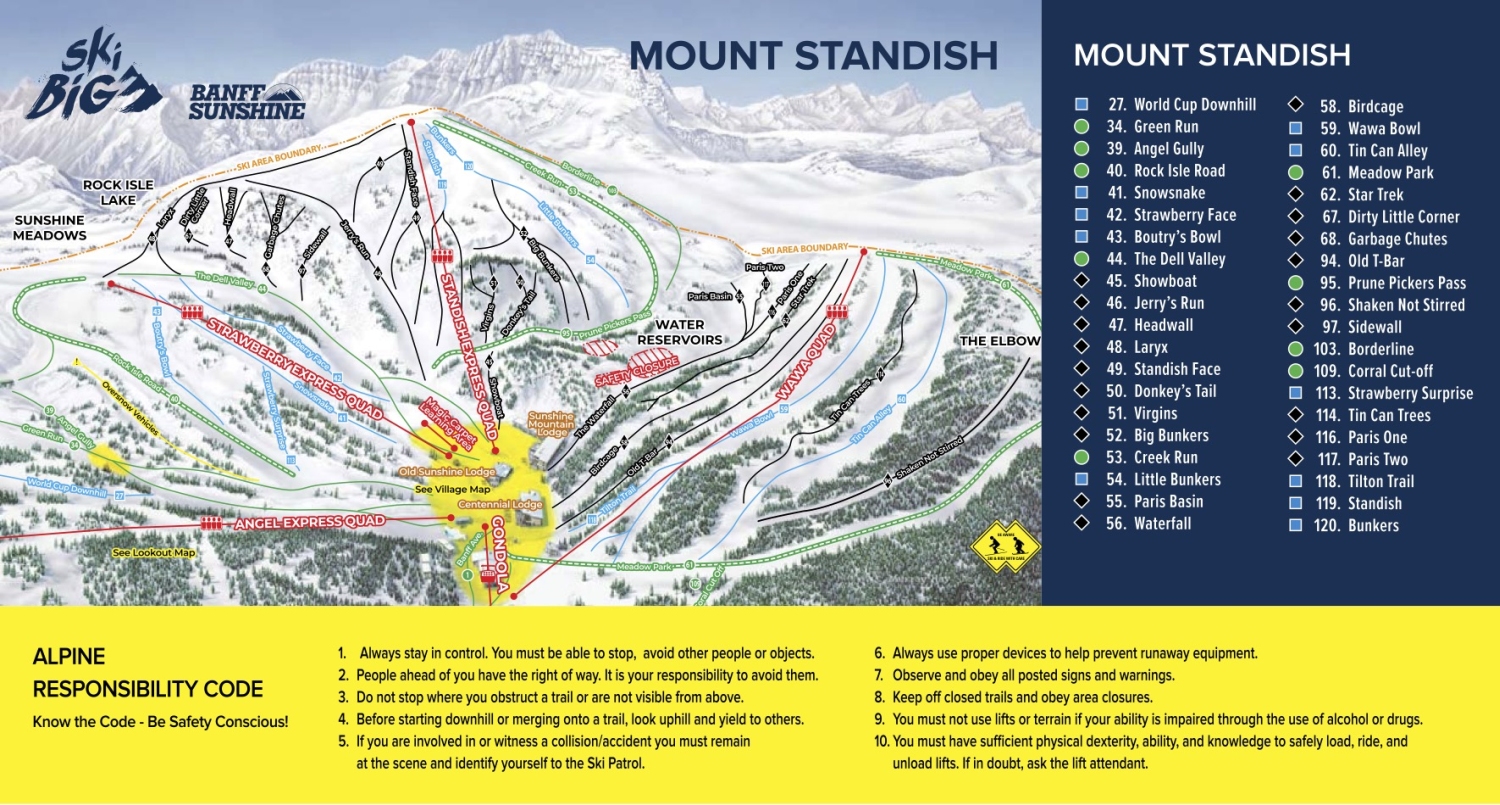 The 3,358 acre ski area covers the mountains to the west of the mid-altitude central service area at Sunshine Village itself, which houses a large well-equipped day lodge complex with a handful of restaurants, bars, equipment hire and childcare facilities, along with the Sunshine Inn. The peaks and ridges above mark the border between Alberta and British Columbia, and some of the ski runs hop back and forth across the frontier.

The 137 runs (adding up to 82km) take in three principal peaks: Mount Standish, Lookout Mountain, and Goat's Eye Mountain. Standish offers the most novice-friendly slopes, with some lovely long green trails back to Sunshine Village, along with a nice mix of scenic intermediate runs. Lookout and Goat's Eye both offer a good range of prime intermediate and advanced slopes, although each has at least one easier route from top to bottom too.

The biggest draws here though are the experts-only Delirium Dive and Wild West sectors on the northern slopes of Lookout and Goat's Eye respectively. Delirium Dive is definitely one for the 'bucket list' of all serious skiers and snowboarders.

Lake Louise: The layout of the ski lifts and slopes has been designed to provide at least one run of each classification (novice, intermediate, and advanced) from every major lift, so mixed ability groups and families can explore the area together. On clear days, the views in all directions across some of the many peaks and glaciers of Banff National Park are breathtaking. 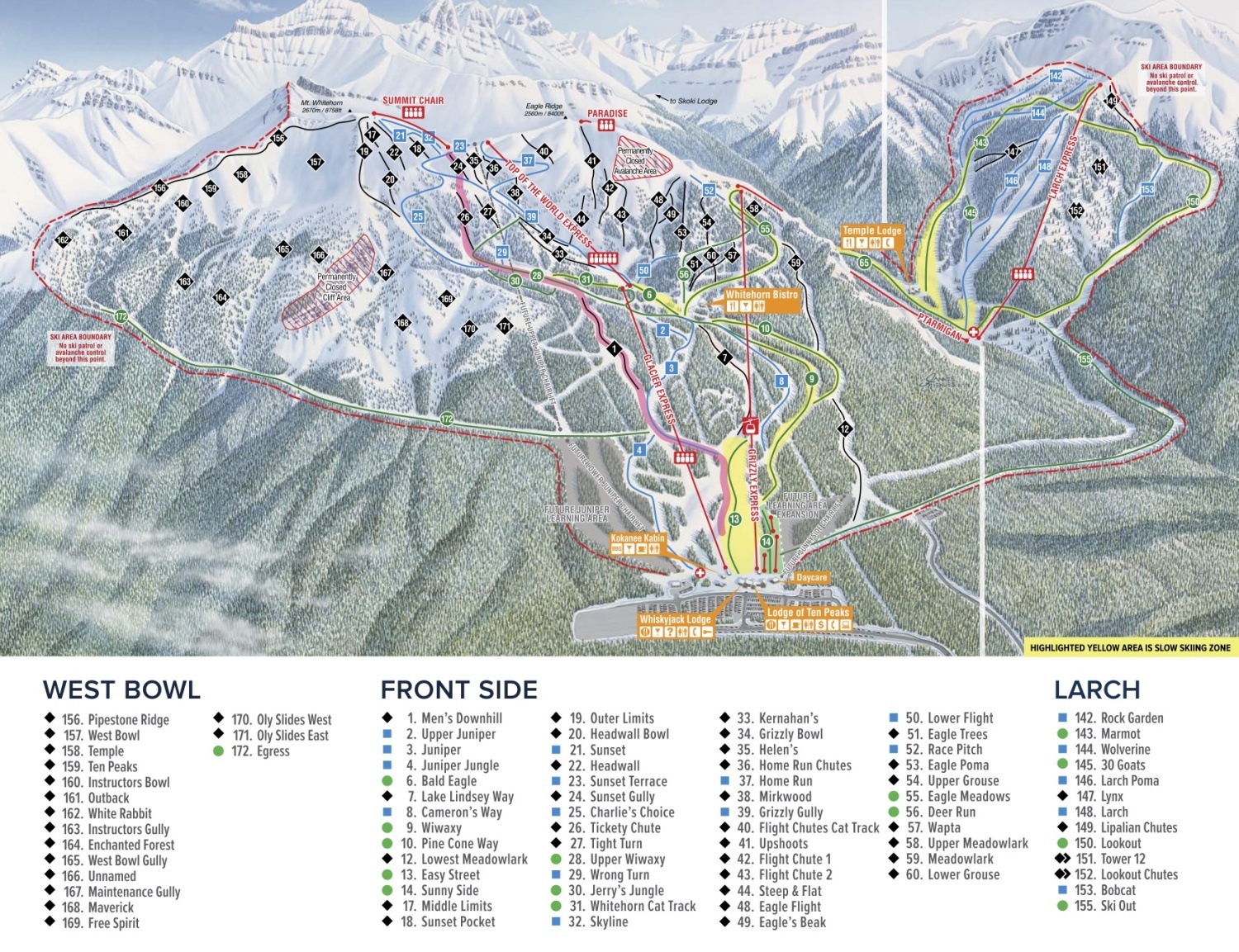 The 4,200 acre ski area is spread over three well-connected principal sectors: The Front-Side South Face directly above the base area, on the slopes of Mount Whitehorn and Saddleback. The Back-Side Powder Bowls on the far side of these peaks, plus the pretty Larch Area on a spur to the south-east on the slopes of Lipalian Mountain.

Over two-thirds of the slopes here are forested and there are 145 named runs covering a good mix of descents of all categories, Lake Louise also boasts the largest terrain park in North America, located in the 'Juniper Jungle' area just above the base area.

The resort has an excellent beginners' zone and a dedicated children's area, with easy access to wide & gentle progression pistes on the sheltered wooded slopes closest to the base area. Childcare facilities are available in a separate dedicated day-lodge nearby. The impressive huge log-built main day-lodge complex houses a couple of bars and cafés and a selection of restaurants, alongside equipment hire and retail shops.

Go to skibig3.com for more extensive ski maps of the area.

Mt Norquay: Low on quantity - but the quality of the off-piste terrain makes the off-piste here worth the cost of hiring a guide who will show it to you. Several descents, through trees and down bowls, including the Gun Run and Sun Chutes.

Sunshine Village: The biggest draws here are the Delirium Dive and Wild West sectors. Open only to transceiver/shovel/probe-equipped advanced-level visitors, these are in-bounds freeride areas filled with some of the steepest and toughest terrain in North America.

Lake Louise: There are acres of ungroomed in-bounds and off-piste terrain. The Back-Side Powder Bowls in particular are a major draw for advanced skiers and snowboarders and are renowned for the quality of their dry & light powder following fresh snowfalls.

In-resort après at all the resorts is minimal - at Norquay, for example, there's just the Lone Pine Pub and Restaurant at the Cascade base lodge, and with no accommodation on the hill, in common with all national park resorts in the Rockies (except Sunshine Village), you'll need to head into Banff itself to continue your revels. Banff is a lively town with more than 130 bars, restaurants, coffee shops and bakeries. Its nightlife rocks till the wee hours, and it even hosts an art museum, and don't miss the Indian Trading Station (complete with totem pole) for Native American souvenirs. More than 50 accommodation options fit any style and budget.

There's no actual 'resort' village at Sunshine either; the resort at Lake Louise or the town of Banff are where most day-visitors stay. Après at Sunshine Village consists of a few late-afternoon beers in the main day-lodge bars before the ski area closes. Overnight guests at the Sunshine Mountain Lodge can remain in the slope-side Saloon bar, which stays open until midnight.

Lake Louise's resort villages contain a fair selection of restaurants and bars, most of them in the larger hotel complexes, plus there are a couple of grocery stores and a small shopping mall. A free shuttle-bus service connects the villages, the various hotels and lodgings, and the ski area. Après ski at the base-area Kokanee Kabin is fairly lively for a couple of hours around closing time at the ski area, especially at the weekends. There are also a handful of saloon-style bars and diner-bars down in the village areas at Lake Louise, the Glacier Saloon at the Fairmont Lake Louise offers occasional live music and dancing, but nightlife in Lake Louise is generally very low-key.

If you have time, it may be worth combining your stay at the Banff resorts with a few days in Marmot Basin Ski Resort in Jasper. The 3.5hr drive along the Icefields Parkway is one of the world's most spectacular drives, with stunning close-up views of glaciers.

Ski hire in Banff is a multi-layered thing. The Fairmont at Lake Louise has its own ski rental service. You can rent through the Big3 Adventure Hub itself, while in Banff rental shops include Ultimate Sports or try the Black Tie Ski Rental Delivery Service.

If you want to learn to ski in any one of the Banff ski resorts, look no further than the Banff Sunshine Snow School. Alternatively the Lake Louise Ski Resort does lessons and ski hire.