We’ve pulled together our favourite ‘Top Ten Budget Ski Accommodations’, so you can enjoy some of the world’s best resorts without breaking the bank.

With superb access to the vast Portes du Soleil ski domain, Morzine is one of the most popular French resorts. Now you can sample its delights for as little as £28 a night! Set to open its doors for the first time this season, (2014/15) The Rude Lodge in central Morzine offers 40 beds in either dorm or twin room accommodation – as well as a fantastic cafe offering up breakfasts, snacks and dinner 7 days per week, and an après-ski bar/club that has to be seen to be believed.

It’s bookable on a day-to-day basis, so no dramas if you just want a couple of nights midweek, or a long weekend. You can arrive and depart any time of the day; if your room’s not ready they will store your bags, allowing you to hit the slopes.

There’s ample storage to stash your board/skis, a bathroom where you can dry your wet kit, and a heated boot room. Add to that a communal area with Xbox Kinect, maps, guide books and magazines, plus a quiet area with free Wi-Fi.

Never heard of Nassfeld? You’re not alone. This resort on the Austria/Italy border is little visited by the Brits, and yet its 110km of pistes have something for everyone, especially beginners and intermediates. It also has the longest floodlit piste in the Alps.

Located only 50 metres from the Millennium Express (the longest cable car in the Alps), The Cube - a striking, reflective cube-shaped hotel - has a red run almost to its door.

Accommodation comes in all shapes and sizes from twins and four-bed rooms with en-suite, and four and eight-bed rooms with shared facilitates. There’s a chill-out area with an open fire, gaming zone and in-house nightclub. There are ramps up to all rooms, making it easier to drag your gear home and clump around in ski boots, as well as free luggage deposit and shower - meaning you can ski all day on arrival/departure days - and free Wi-Fi.

Rate: From €78 to €119 a night, including half-board and lift pass
cube-hotels.com

Laax and neighbouring Flims make up one of Switzerland’s biggest ski domains, but the resort has really made its mark by investing heavily in terrain parks, half-pipes and high-profile events to attract the young boarder/freestyle skier – who doesn’t usually have the deepest pockets!
As budget accommodation goes this is very cool, with design and function high on Riders’ priority list. This place wouldn’t look out of place in downtown Stockholm. The deluxe suites aren’t exactly budget (from €105 pp/night) but are not overpriced either, offering WC/bath/shower, 40in Full HD TV Surround Sound system and a Playstation 3 Slim.

The budget offering is made up of the ‘One-eighty’ rooms, which sleep a maximum of five and start at €30/night B+B. These beds can be booked separately, or by the room if there are five of you. 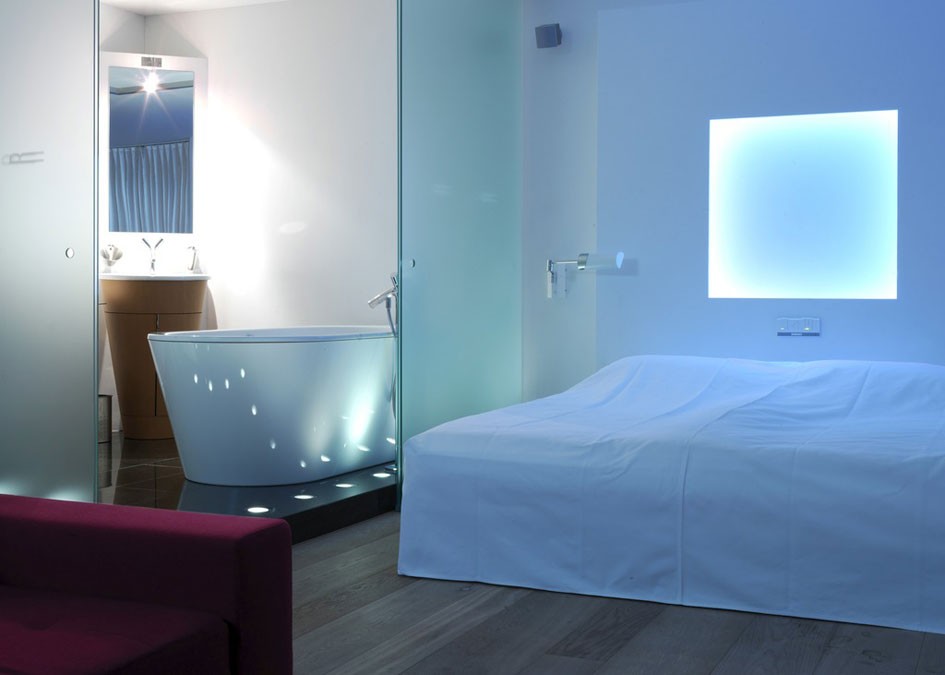 Alberta’s Big 3 powder resorts of Sunshine Village, Lake Louise and Mt Norquay should be on anyone’s must-ski list. Stay in downtown Banff and you can ski the lot, from as little as $32 a night, or from $110 for a private en-suite double room - that’s only £30pp. The hostel has all you need, with free Wi-Fi, bag storage, guest kitchen - and the price even includes a breakfast of fresh fruit and self-cooked pancakes…

Next to the lobby is the Beaver Banff bar, which they call a great place to ‘exercise your liver’. It offers up homemade pizza, which you can wash down with a $4 pint, while watching a live band twice a month. There’s also a $6.50 dinner special, available when you buy a drink. That’s dinner and a beer for under £6!

€15 a night to ski the legendry Chamonix valley? Now there’s a deal if ever there was one! The Le Vieux Grassonnet gite is around 200 years old and can sleep 19, if you’re happy being friendly; it takes bookings from individuals through to large groups.

To keep the cost down even more, there is a kitchen, communal dining room and a lounge. To stay here you do need to be a ‘Chalets of Holidays in Mountain’ ( CVM) member, but it’s only €1.50 to join, or €3 for a family.

The gite is located close to the Argentiere lifts, and near a bus stop to reach the rest of Chamonix. If self-catering isn’t your thing, they also run two other chalets at a very reasonable €35 a night half board.

A skiing holiday in Germany? Yes! Right on the border with Austria is Garmisch, which tops out at 2,830m and has a good snow record - it even hosted the 1936 Winter Olympics. It’s not the biggest of resorts, with only 60km of pistes, but it is a great beginner/intermediate resort; it’s good for a post ski sausage too.

Hostel 2962 offers very affordable rooms, from dorm to doubles, and there are a couple of apartments too. Dorm rooms start at €20 a night plus €6 for breakfast. The 2962 is right in the centre of town, only 250m from the main train station and a short bus hop to the lifts - making it great for those without a car. 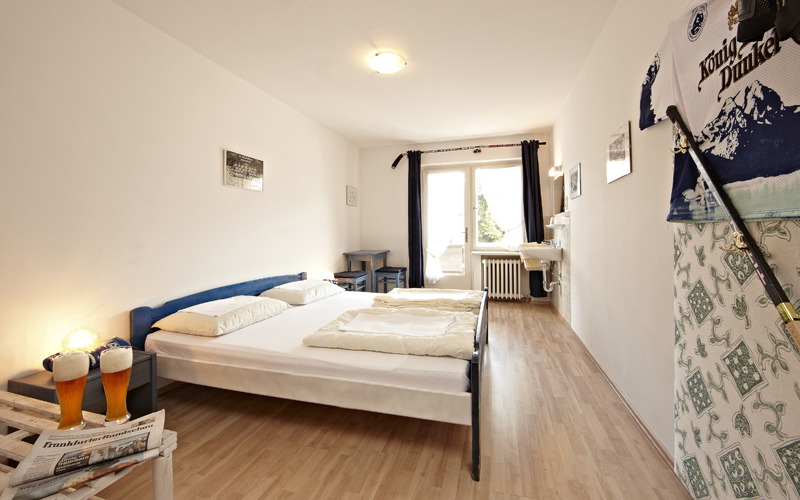 Skiing in Sweden has a character and feel all its own, quite different from the big alpine areas. And though Sweden is pricey, skiing here doesn’t have to break the bank; in fact it can be very affordable as long as you don’t go to the pub too often!

The Dalens Gard, which is a classic red Scandinavian building, has four rooms with private WC/shower and six rooms with shared WC/shower, with free Wi-Fi throughout. The lodge has a large dining room, a fireplace, sauna, pool table and even a dartboard. It’s run as a B+B, but to save even more cash, you can use the communal kitchen in the evening.

St Moritz is one of the world’s best winter sports resorts and a paradise for well-heeled intermediates with 350km of pistes to play on. When contemplating a budget destination, its fabled and fabulous slopes aren’t normally the first mentioned - but for Hosteling International members, the somewhat drab-looking green and grey block offers the cheapest beds in town.
Just 1.2km from the Bad cable car, served by a local bus, the hostel isn’t ski in, ski out - but it does have clean fresh rooms, at a fraction of the price of what most of the people you’ll be sharing the slopes with are paying. 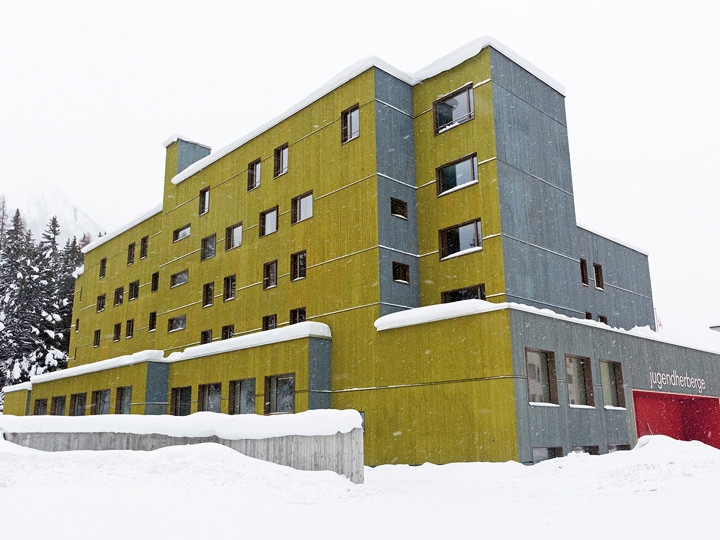 Ideal for an odd day or a long weekend, as is Aviemore ski resort itself, this bunkhouse on the banks of the Spey has dorms as well as family and double rooms. It’s on the road up to the ski slopes, right next door to the Old Bridge Inn, which has a log fire as well as a great selection of cask ales and malt whiskies.

The bunkhouse is self-catering, with a large communal kitchen, and has free WI-FI and a ski/cycle room. The skiing? Well, this is Scotland, so it swings wildly from glorious to gloomy, but if you can seize the moment, this is an affordable way to do it.

In theory, if you’ve got all this way, you should be able to afford a decent place to stay, but with backpacking being a rite of passage for many young skiers, cheap and cheerful is invariably the norm. Holly’s is a top option for skiing or snowboarding one of New Zealand’s best known ski resorts, in an area that offers a wide variety of skiing amid some truly spectacular panoramic landscapes. A big house that’s now been converted into a backpacker-friendly hang out, many seasonaires stay here for the whole winter, so it’s a great place to meet people with the lowdown on all things local.

The $24 a night hostel is on a quiet street, 200 metres from the main shops and boasts mountain views, as well as being just two blocks from the lake front.