A fashionable, pretty ski resort in Austria's Vorarlberg region, Lech is an intermediate skier's dream. From the Lech piste map to the best ski hire and après ski, here's your guide to skiing in Lech.

Lech has long been a luxury resort set in the midst of some spectacular skiing. Now, since the opening of the new Flexenbahn gondola link between Stuben and Zürs, it is at the heart of Austria's biggest ski area. It is now possible to get from Lech to, say St Anton, entirely on skis - no more tedious bus ride! Lech is also home to one of the Alps’ best snow records, so there's plenty to love here.

As a resort, Lech and its overlooking ski-in, ski-out suburb of Oberlech, is decidedly upmarket, but still very family-friendly. Once a humble farming village, Lech ski resort has become the winter hideaway of the wealthy and the famous. However, with its pretty riverside setting, and wide range of hotels, from the five-star to the budget, it really can cater for all tastes and pockets - and for intermediates, the skiing here is second to none. With 305km of linked runs and 200km of ungroomed ski routes in the Ski Arlberg zone, the combined Lech-Zürs area now ranks among the top five largest ski domains in the world.

The Lech piste map pretty much only comes in two colours - blue and red. There is just one black piste here - a short stretch from Seekopf down to Zürs. Practically all the slopes are above the treeline, the only real exception being the awkwardly steep blue runs just above Lech. The terrain in Oberlech (the smaller traffic-free hamlet overlooking the main town) is nearly all blue - wide, immaculately groomed cruisers. 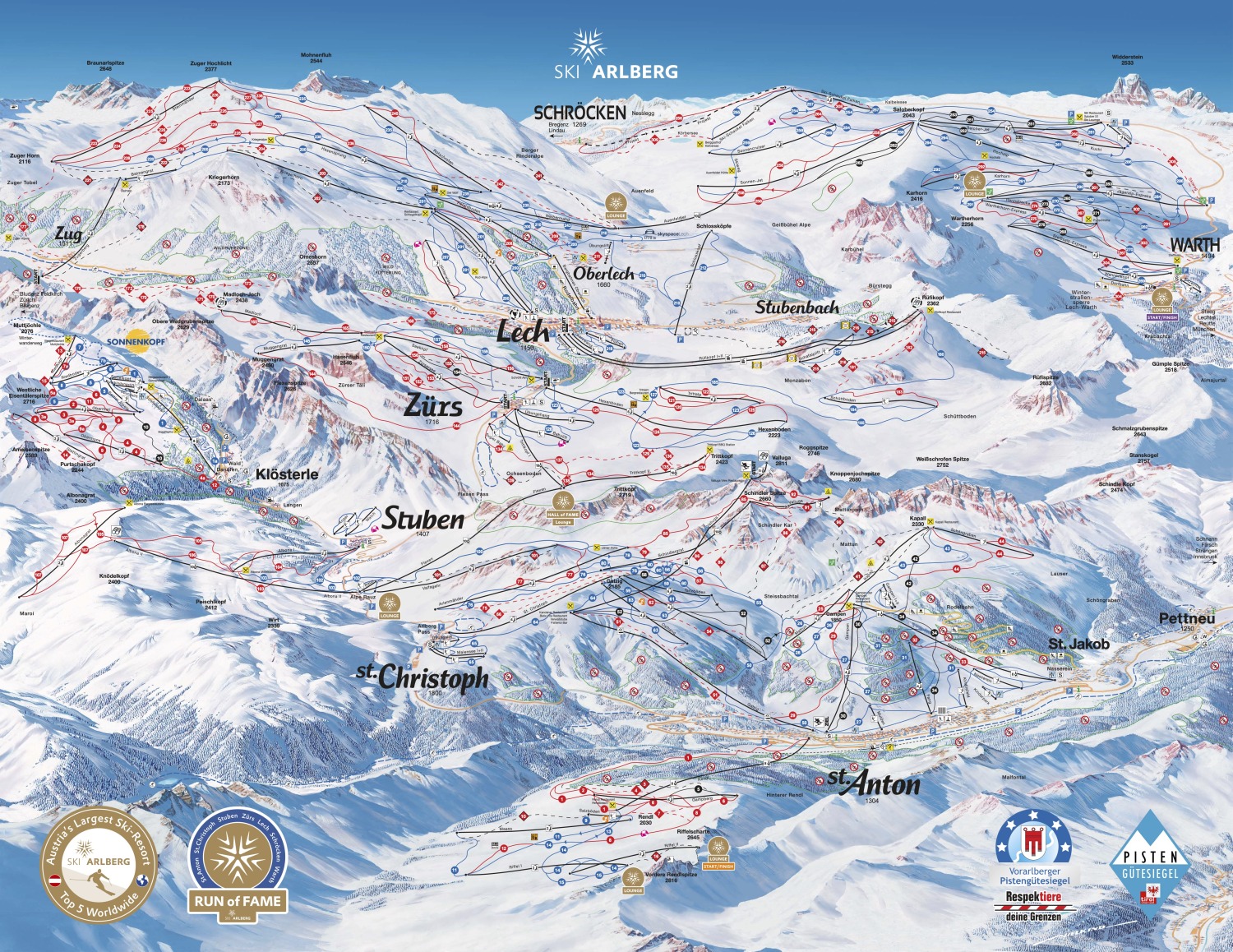 Further up, at Zuger Hochlicht, adventurous intermediates will find some terrific red runs, including a number of red ski routes. These are a notable feature of Lech-Zürs - mostly ungroomed runs that are ideal for those looking to take their first venture off-piste. The run down to Zug, which starts as a piste and ends as a 'route' is an especially satisfying run.

Lech is also home to the famous White Ring ski circuit, which is the setting for a wonderful ski race every winter, but which can be happily skied anytime by adventurous intermediates. A mix of mostly fast lifts and excellent long red and blue runs, it does include one ski route, from Madloch-Joch down to Zug, which we'd recommend avoiding late in the day. Because it's so popular, it can get very cut up and bumpy. The Kriegerhorn chair up from Zug has to be one of the slowest anywhere.

With 200km of off-piste terrain now opened up for experts, the backcountry around Lech-Zürs is the main attraction. The Langerzug ski route from Rufikopf down to Lech is a particular highlight. The 2013 Auenfeldjet cable-car link-up with Warth-Schrocken enhanced the freeride terrain here dramatically as Warth has a reputation as the snowiest resort in the Alps, receiving an average 11m onto its north-facing slopes.

This is great news for the expert skier, who was always slightly short-changed here before, by a resort that wore its intermediate heart firmly on its sleeve. These days, of course, the legendary freeride around St Anton and St Christoph is now very much part of the Lech experience, making off-piste skiing in Lech one of the area's main attractions.

Lech-Zürs is also the only area in Austria to offer heliskiing, with two peaks available: the Mehlsack summit is the choice for experienced skiers in search of a challenging adventure, while the Schneetäli-Orgelscharte is the recommended heliskiing option for intermediate skiers.

Lech has much to offer the many non-skiers who come here - from the ubiquitous sleigh rides, to ice-skating, curling, a network of winter walks, and much up-market shopping and luxurious spas. Outdoor bars and cafes line the main street, where there's a friendly, buzzy après ski atmosphere. Try the ice-bar at the Hotel Krone, which also hosts the lively K club, or the Tannbergerhof. Also popular are the Archiv Bar next to the Rüfikopf cable car and the Fux Jazzbar.

At Oberlech, the Ice-bar of the Burg hotel is a popular après spot, as is the champagne bar at the Hotel Montana. Most eating out is actually eating in - the majority of excellent restaurants are hotel-based. As you might expect the après is pricey, so if you really want to ski and party, head to St Anton.

Many of the bars keep rocking right through the evening until late at night, others have a more sophisticated lounge-bar ambiance. Some will have DJs spinning tunes later in the evening, plus there's a couple of proper nightclubs too. The resort also contains a nice selection of cafés and tea rooms, together with a great range of good restaurants.

There are many options for ski hire in Lech, including newcomers Skibex. Established outlets include multiple branches of Strolz, the hotel Burg's ski rental service and Intersport Arlberg.

When it comes to learning to ski in Lech, the Lech Ski School is an obvious go-to. Other options for ski lessons in Lech include Omeshorn Alpincenter, hiring a private guide/instructor such as at the Tannberg Ski School, or one of the independent Whiteguides.