Here is our ten top list of man-made places to get some air, or slide a rail or two. We’ve chosen our favourites to keep you all happy - from aspiring five year-olds, to the most hard core of park-heads. They may not be everyone’s favourite; it could be that we just love the concept, or even just the backdrop. But from indoor training centres to family inclusive lines, our list aims to get you all a little air time.

Ok, so this isn’t a park as such - and ok, it’s indoors - but this place is spot on for learning big air without having to breaking anything on the way. The centre, housed within a barn, allows you to slowly progress from one of their six Olympic-sized trampolines to the 35 foot high ramp, which kicks you up into a huge foam filled pit. Once you’ve got it nailed you can progress straight to the slopes outside and throw down some big air in the real world. There is also an indoor street style rail line and a skate bowl too.
www.woodwardatcopper.com 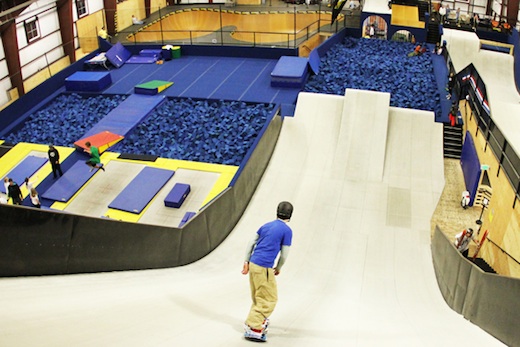 Last season saw probably the most progressive park ever built. It was created by Nike to host the final of the ‘Nike Chosen’ series, a season-long freestyle and film making competition. The progressive skate style urban park had some incredible features, including  a diving board, staircase and a ridiculously large Nike swish. The park now has a slightly different set up to the one used for the contest, but even post event it’s well worth a visit.
www.montafon.at

Les 2 Alpes is always popular with the Brits every winter, but we think the best time for the freestyler to visit here is in the summer months. Built on Europe’s largest glacier, the park at 3,200 metres is open all summer - and while often ridiculously cold up there in the winter, it makes for the perfect spot for some summer time big air. There are some great lines for beginners through to experts, with the glacier being a spot-on pitch for a park. The two well shaped pipes, one of which is Olympic size, are always well maintained. For those not wanting to jib all day, there’s also some great mountain biking lower down the mountain too.
www.2alpes-snowpark.com

The resort whose top bar is called the ‘Crap Bar’ also brings you the snowpark ‘NoName’: where do they get their inspiration from? But, as with a book’s cover, it’s not all in the name, and Laax’s parks - of which there are four - are brilliant. ‘NoName’ claims to have Europe’s biggest half pipe, at the bottom of which sits ‘Café NoName’, a cool place to chill out with a drink to watch all the pipe action. ‘Ils Plauns’ snowpark is a series of very large kickers, rollers and table tops whereas the ‘Curnius’ park is a mix of rails and boxes. There’s also a 300 metre long beginners park called -  yes, you guessed it – ‘Beginners Park’. Similar to the Woodward Centre, Laax now has Europe's first indoor freestyle hall situated at the base station; it’s called the Freestyle Academy.
www.laax.com 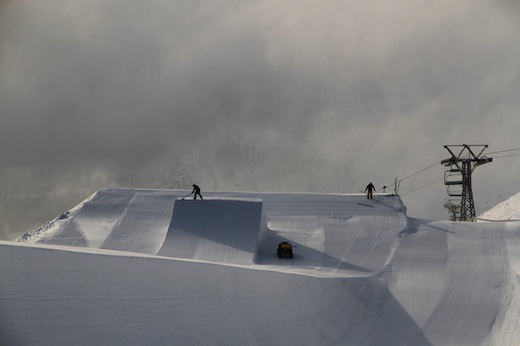 Not a specific park but a company, Q Parks run an astounding 28 parks across Austria, Switzerland, Germany and Italy, including Mayrhofen, Kitzbuhel and Solden. Each park is individually designed to best suit the resort’s profile and terrain, and its website is a fantastic source of information from the individual make-up of each park to events and competition updates. The Q Parks ‘Time to Shine Series’ is free to enter and has a €60,000 prize fund; it’s a Europe-wide tour of competitions, which culminates with a grand final in the spring, where the top 30 freeskiers, snowboarders and rookies will fight it out for the cash.
www.qparks.com 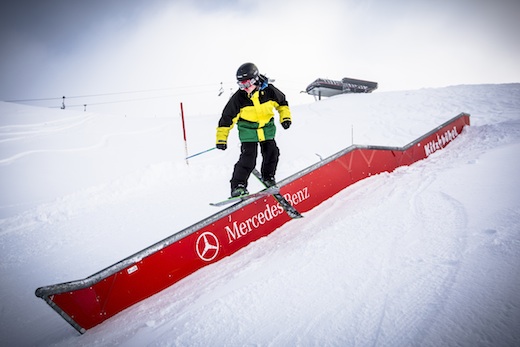 Buttermilk, one part of the four ski areas that make up the Aspen-Snowmass resort, has five very good parks. It regularly hosts the ESPN Winter X Games and will do so again in 2013. There is a ridiculous amount of lines here, with the two mile long line of the main Buttermilk park pushing the fittest of riders to the edge. The street style lines from the 2012 X Games are still up, as are the big four jump lines, allowing the public to check out the same terrain the pros ride. The Olympic size half-pipe is always in top condition and is, surprisingly, one of only three such pipes in North America. Lots of new log features and the unique use of an old lift tower are recent additions. There really is a great progression system of graded lines here, keeping everyone from beginner to pro happy.
www.aspensnowmass.com/en/buttermilk/pipes-and-parks

Avoriaz has always been a freestyle haven, and with the half pipe now being enlarged to a massive 120 metres with 6 metre high walls, it’s not sitting back but looking well and truly forward. There are two main parks, a boardcross and a kids’ parkway for the tiny ones, but what we love best is ‘The Stash’. The concept, imported from the Californian resort of North Star, was developed by the godfather of snowboarding, Jake Burton of Burton snowboards. The whole area is built within the forest from non-metal features: there’s logs and tree trunk obstacles, wooden tables for sliding on, jumps from paths and rocks, and trees bent like rainbows - it really is very cool. The idea is that adults can ride alongside their kids and take on features of varying difficulty at the same time, all in a natural environment. There are many different lines through the area’s 1.3km length, so you can mix it up, and you’ll often find something new to negotiate when you thought you knew it inside out.
www.avoriaz.com

Two hours inland from LA is not the first area you’d think about finding one of the world’s best freestyle parks, but at Bear Mountain you have the lot. The main park, built among the trees, has all the hits, rails and features you’d expect of a top park – with more than 120 jumps and 80 jibs/rails. The ‘Skill Builder Park’ complements the main park perfectly and does just what it says, with a series of progressive lines for those first timers. But what we love most of all is the down town vibe of the Red Bull Plaza: as they put it, ‘Why deal with cops busting your street spot when you can slide through the new Plaza all winter long?’  It’s a city centre street inspired park with stair hand rails built against a brick wall and a 32 foot flight of steps amongst a whole load of city-esque features. It’s very cool.
www.bearmountain.com

Hakuba village is the conduit for 13 ski resorts, which put together have four half pipes and seven terrain parks. It’s possibly the best place to snowboard in Japan, and the R-4 Big Snow Park at Hukaba 47 is where all the local freestylers head. It has the best half pipe in the area, and the hits here are big - sometimes very big - and there is often a board-x set up, although it’s sometimes not too well maintained between competitions. Iwatake is the best place to head for beginners and intermediates, and is very well designed with a great selection of rails. Yanaba Ski Resort is also perfect for the intermediate jibber, with a long line of rails and hits to tackle. For more information check out the excellent Snow Search Japan guide book.
www.wsg-media.com

The ‘Absolut Park’ is a mere 55 minutes drive south from Saltzburg and only 2 hours from Munich, and, as such, is the hang out of the area’s freestylers. There are two pipes, the larger at 170m with 7m walls, and the smaller at 100m with 4m walls. A very good and varied collection of rails and kickers is serviced by its own lift, from which you can watch the other riders getting air. There are five kicker lines with some seriously large hits and some long and well-shaped rails. Lower down there is the easier ‘Jib Park’ with wide rails and boxes, and if that’s not enough then check out the ‘Chill House - an indoor skate park and bouldering centre. Similar to Avoriaz (number 7 above), Flachauwinkl also boasts its own ‘The Stash’ area which has 38 wooden made features, and the strap line of ‘The woods are the goods’!
www.absolutpark.com